Driving through the desert before the war we could not even assume what was yet to come at the end of our Syrian journey. Although I have heard of the city „somewhere in the desert“ where the nicely preserved Roman town lies and although I have seen few photos previously, reading about the place I was going to visit, nothing could have prepared me for the astonishing sight that emerged before me when the road curved behind one of the dunes!

View of the old town surrounded by palm trees

The town of Palmyra leaves you with you jaw down when you finally get a hold of those columns coming out of the sand and the ancient town that extends over the desert valley that goes towards one lush oasis!

Remains in the former Temple of Baal

I didn’t even come close enough nor I could yet say that my feet stepped onto this two millennia soil, but I was already amazed by the sight before my eyes! Just as someone, for that occasion only, has uncovered half of the city, just then, few hours before I came. That is how unbelievable the sight was!

Mentioned for the first time in the archives of Mari in the second millennium BC, the city of Palmyra was founded, they say, by the king Solomon. The name is the Greek translation of the Aramaic original Tadmor, which means „the palm tree“. Quite expected when having in mind that in the middle of the vast region of sand there was one small town’s oasis.

Once the most important monument in Palmyra

For a long time Palmyra was a lively stop on the caravan route for travelers and merchants crossing the desert so much so that it earned the nickname of the „bride of the desert“. The city markets traded spices, precious stones and metals, luxurious fabrics with the final destinations such as Egypt, Spain or Gaul.

Walls of the Temple endured through centuries

Palmyra reached its maximum splendor during the rule of a woman who, according to her importance and political influence, can be compared to Cleopatra, the queen of Egypt. The famous queen of Palmyra was Zenobia. She was defeated by Roman Emperor Aurelian who razed the city in 272 AD and built another, the Roman town instead. Later on, Palmyra was taken by the Arabs.

Lord of the Earth

The first thing I have noticed when coming closer to the ruins of the city was the sight of the Great Colonnade and then on the right, there were huge walls of one of the temples.

The vast courtyard of the ancient building

Judging by its size, it was not hard to guess that this was a relic dedicated to the supreme god, and that was the Aramaic god called Baal. This was the most important building in Palmyra. (At least it was, until it got destroyed during the recent civil war!)

Huge columns in front of the Temple

The name of Baal in the Phoenician language meant simply „master“ or „lord“. He was the most vigorous of all gods and was also known as the „Cloud Rider“, „All-Powerful“ and „Lord of the Earth“. In Greek mythology this god was associated with Cronus, in Roman with Saturn.

Building the temple lasted for many centuries, additional premises and objects would have been added from time to time, and the ruins that could be seen in 2008 actually dated from the Hellenistic age. Construction of the temple was completed only in the mid-2nd century AD and its destruction began little more than a hundred years later in 273, at the hand of Aurelian during the second conquest of the city.

Ritual object in the courtyard

The courtyard of the temple was closed in by a wall, originally 11 meters in height, on the inside of which there opened porticoes with double rows of Corinthian columns. Corbels at about half of the height of the columns originally supported statues of citizens who had donated funds to the construction of the Temple.

One of the camels resting on the sight

The shrine was also enclosed and accessible only to the priests. Every year, on the day corresponding to April 7th of the modern calendar, priests celebrated the ceremony in honor of god Baal. For seven days, worshipers from the entire surrounding territory  flocked to the Temple bearing animals to be sacrificed to the supreme god. Animals were herded into the Temple through a passageway under the western side and around the shrine and the Temple, for seven times. On the last day, after the seventh turn, animals were led to the altar.

Great Colonnade leading to the other end

As the decoration in the north chamber of the shrine showed, the temple was dedicated not to Baal alone, but also to Yarhibol, god of the Sun, and Aglibol, goddess of the Moon. The ceiling was decorated with a relief of the seven planetary divinities and signs of the zodiac.

This was one great monument to ancient times that, unfortunately, doesn’t exist any more… 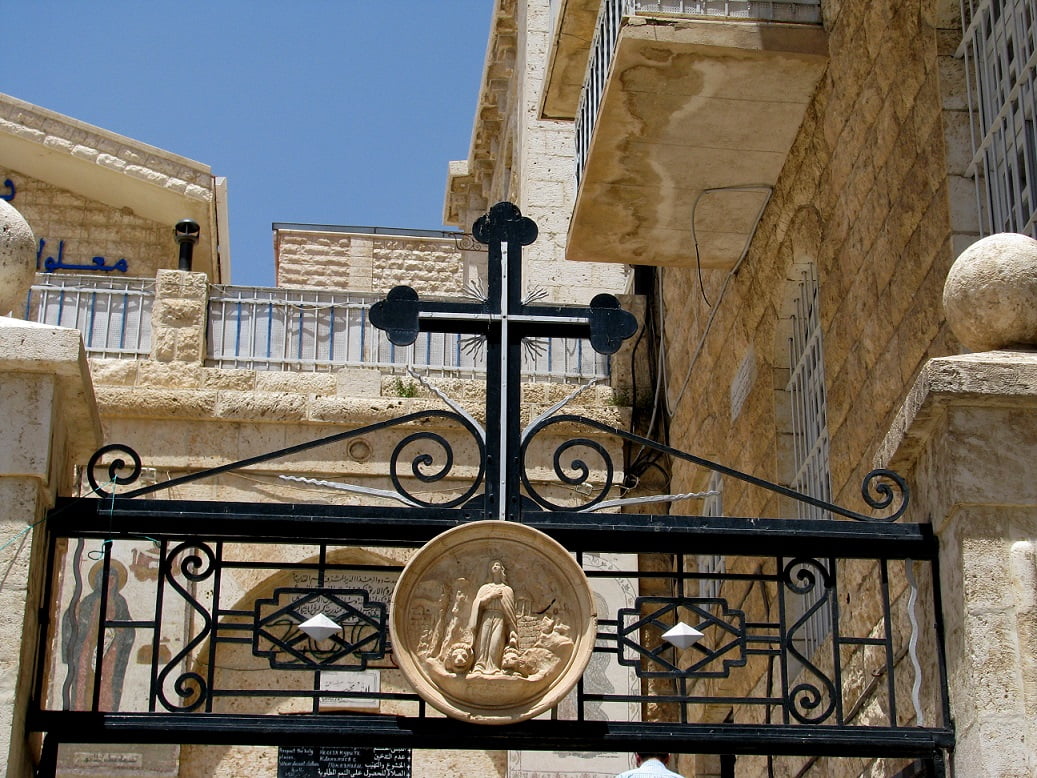 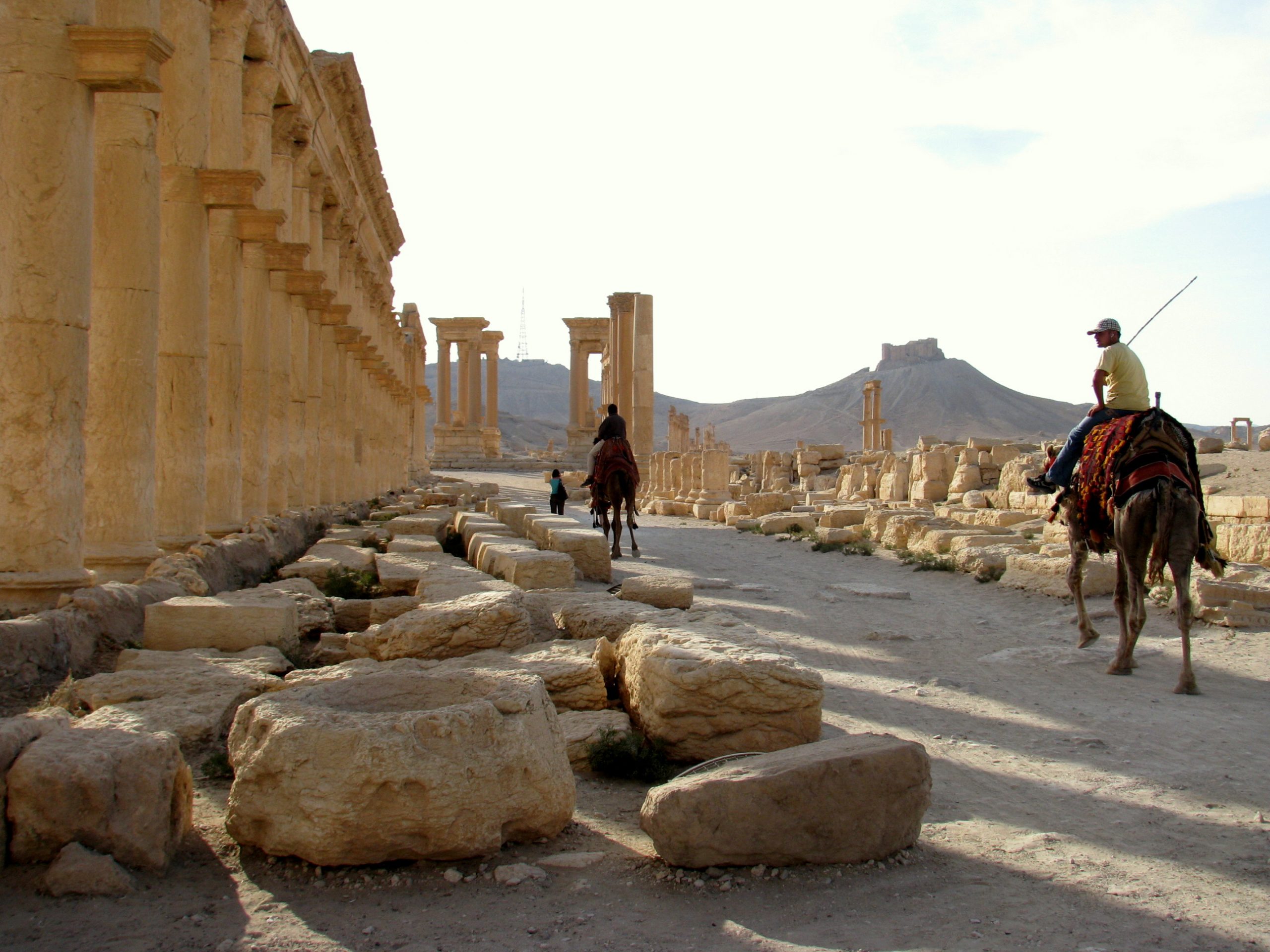