The ultimate guide to Ljubljana

Here is the ultimate guide to Ljubljana especially if you don’t have much time. Slovenia is a small country and visitors tend to hop from one place to another having the opportunity to see most of its attractions in a week or so. That’s exactly what I did and that’s why I’m posting about the main things to do in Ljubljana.

Things to do in Ljubljana

There are a few places one has to visit when coming to the city. They are all at the very center of Ljubljana and can’t be missed. Still, it would be helpful to know a few basic things about Ljubljana attractions since you are bound to stumble upon them one way or another. Also, make sure to get info about the recent Covid situation in the country. 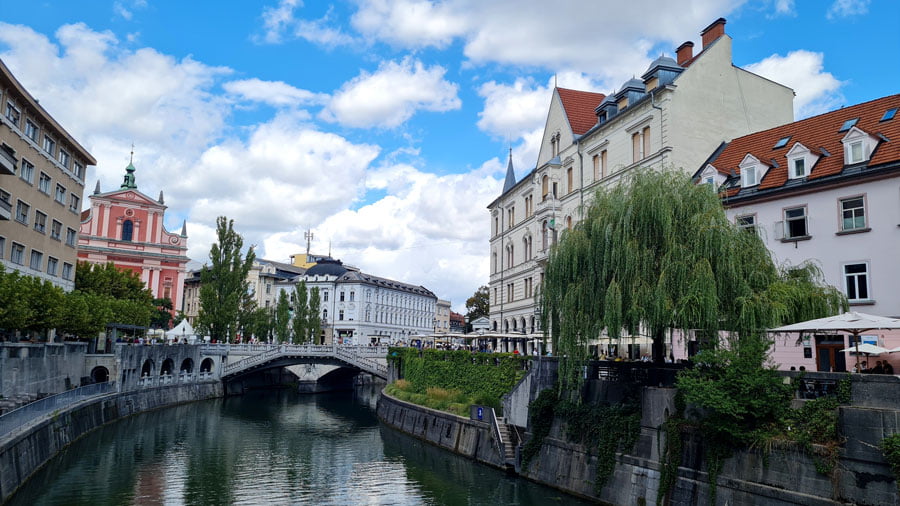 Things to do in Ljubljana: Stroll around the center

1. CLIMB UP THE LJUBLJANA CASTLE

The key landmark here is Ljubljana Castle. It’s the complex that stands above the central part of the city that was originally built as a medieval fortress. Dating back to the 11th century, the Castle’s main structure was erected in the 15th century in order to defend the Habsburg Empire against the Ottoman invasion. 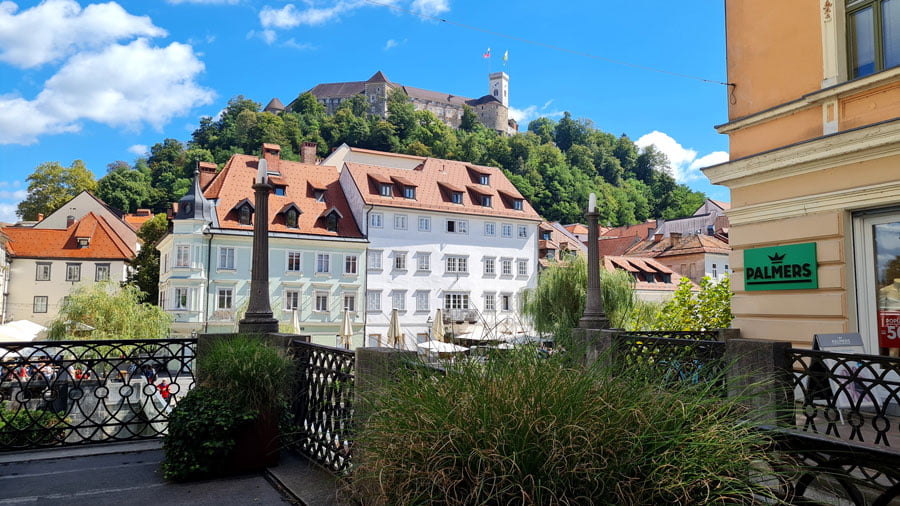 The castle above the city

It’s easy to picture why Ljubljana Castle served as a defense fort at first. When you stand in its courtyard, surrounded by the strong walls, you have the feeling of being isolated and cut off from the rest of the world. Still, its great location was the reason to change the fortress’ purpose. The Castle served as a seat for lords from the 14th century. 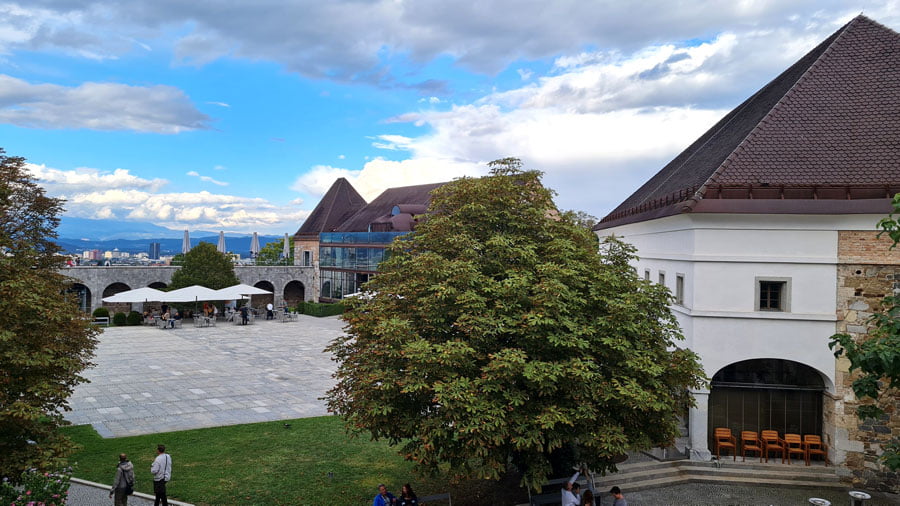 When you see its towers or climb the walls to get a better view of the city, try to remember that this was once an arsenal, that it was even occupied by the French army, served as a military hospital but a prison as well. Its long history left a great trace deep into the soil which will certainly give you goosebumps. 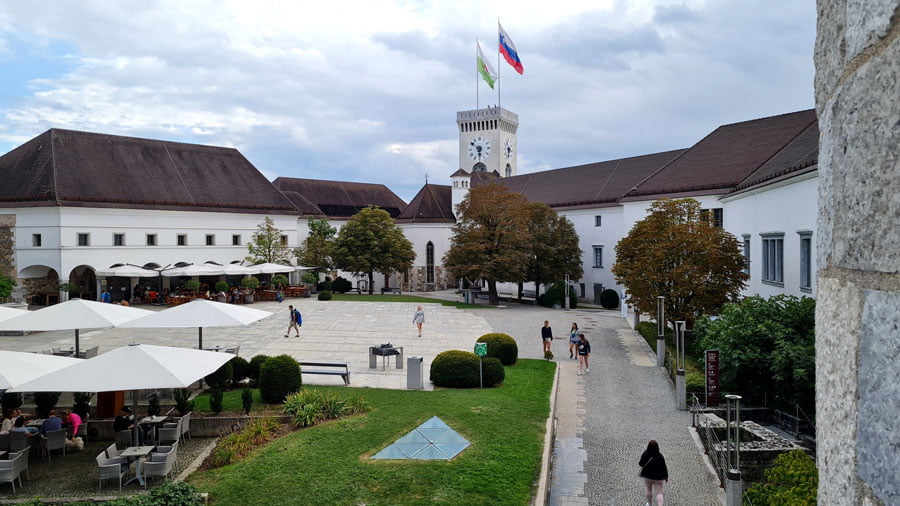 TIP: Take a funicular to climb up from the city center. The return ticket is about 4 Euros. Plan to have a coffee or lunch in one of the Castle’s restaurants. If you want to enter museums and exhibitions that are housed here or to climb the Outlook Tower, you can buy a ticket at the counter. 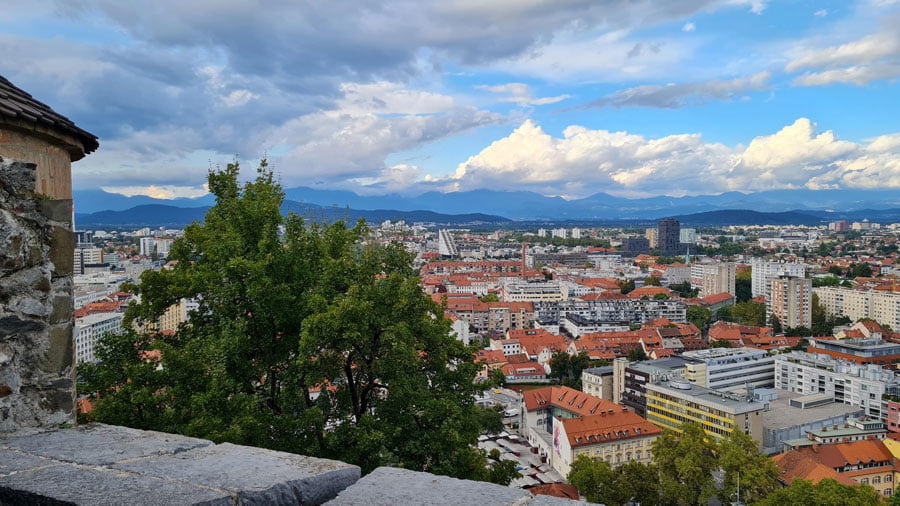 The part of the city that is often referred to as Plečnik’s Ljubljana is full of architectural beauties that are listed as UNESCO’s World Heritage. The famous architect Jože Plečnik was born in 1872 and had a major impact on the architecture of – not only Ljubljana but Vienna and Prague as well. His imprint on Ljubljana is usually compared to the one Antoni Gaudi had on Barcelona.

Charming buildings and plazas that belong to Plečnik’s Ljubljana have to be on your things to do in Ljubljana list since these are some of the most beautiful landmarks of the city. Let me just mention the National and University Library building, famous bridges and Ljubljanica river embankments, the Central Market, Ljubljana cemetery, parks, plazas, etc. 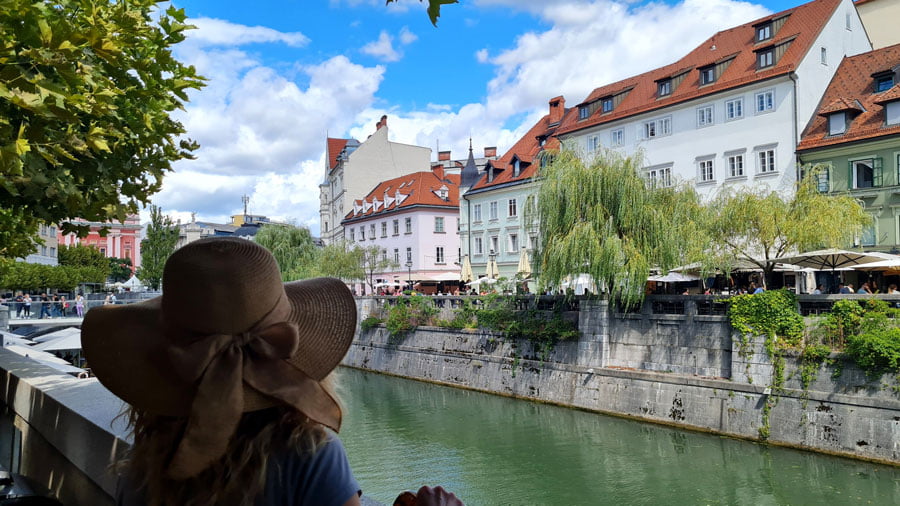 Things to do in Ljubljana: Enjoy the views

TIP: Consider downloading a NEXTO app that is free of charge. It will guide you through Jože Plečnik’s work of art and take you throughout the city. It’s available for Android and iOS. 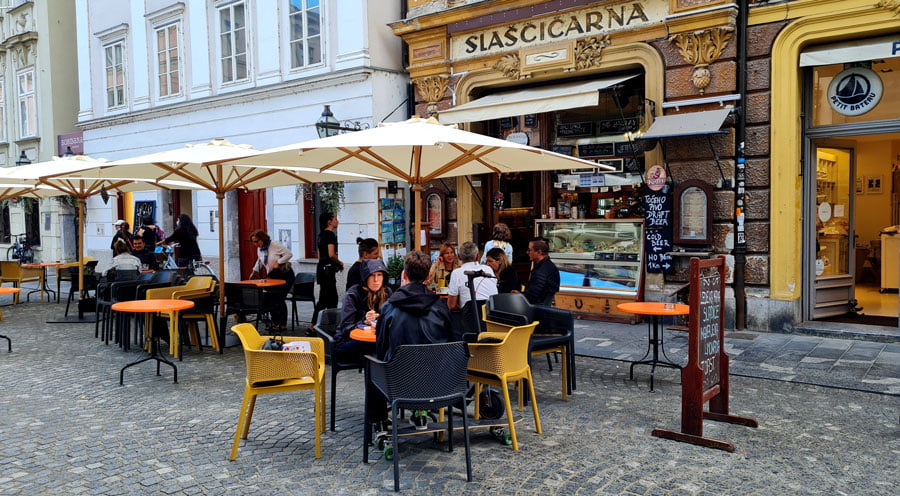 Plečnik’s imprint that is associated with the Vienna Secession or the Art Nouveau style of architecture can easily be recognized in all its work. The same goes for the famous Triple Bridge. 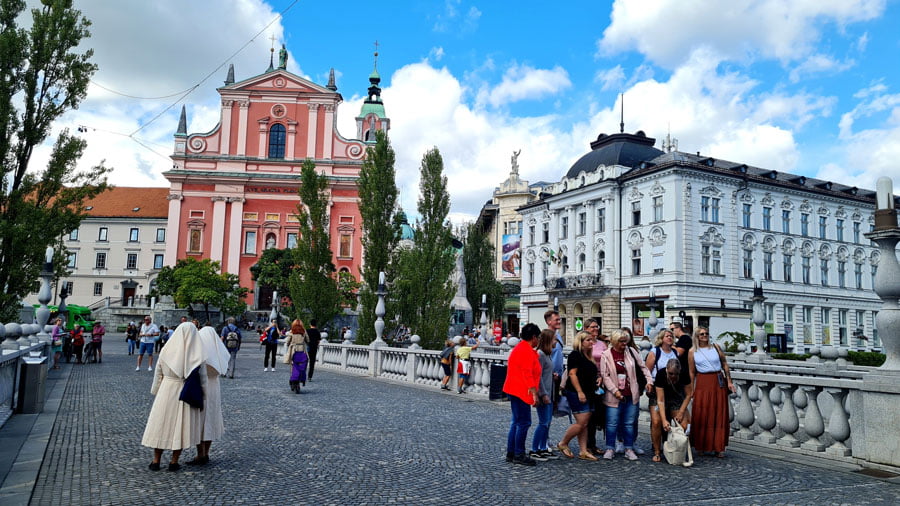 The central bridge was constructed in the first half of the 19th century. It was built as a medieval wooden bridge. Jože Plečnik added two pedestrian bridges on each side creating a charming landmark of Ljubljana. 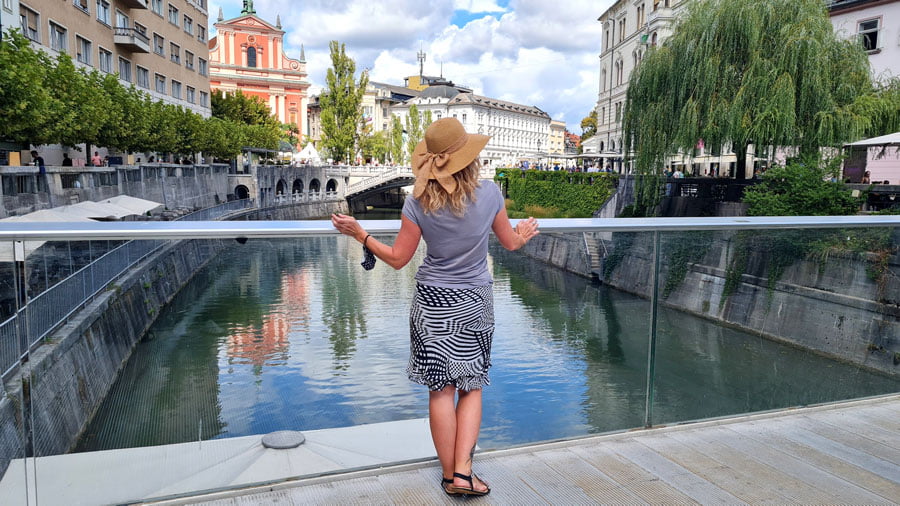 View from the previous bridge

Plečnik’s idea for the Covered Market was to construct a two-story structure of riverside market halls that goes along the river bank. It stretches between the Triple Bridge and the Dragon Bridge on the right bank of Ljubljanica. 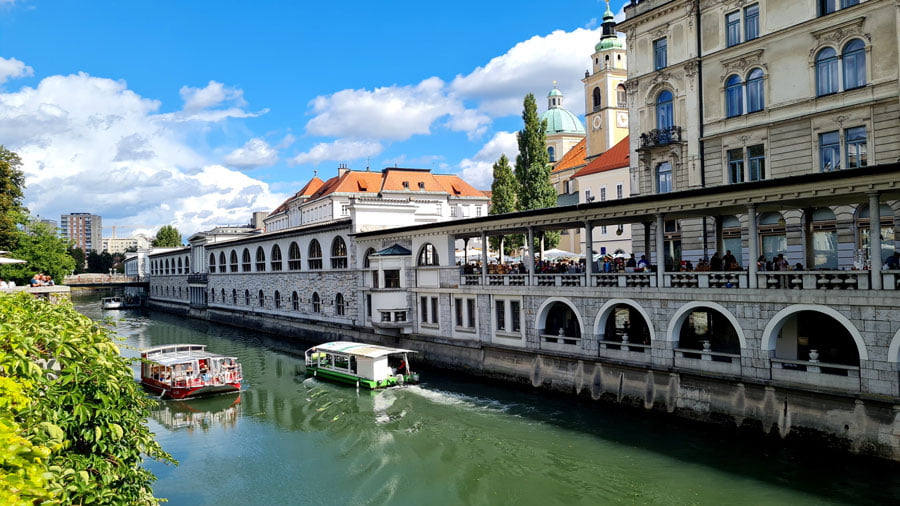 Boats next to the Covered Market

The market is open every day except Sunday. It often houses food market events. When I was there, fast food from all over the world was introduced here. I could try Indian samosa or Arabic shawarma in the middle of Europe. 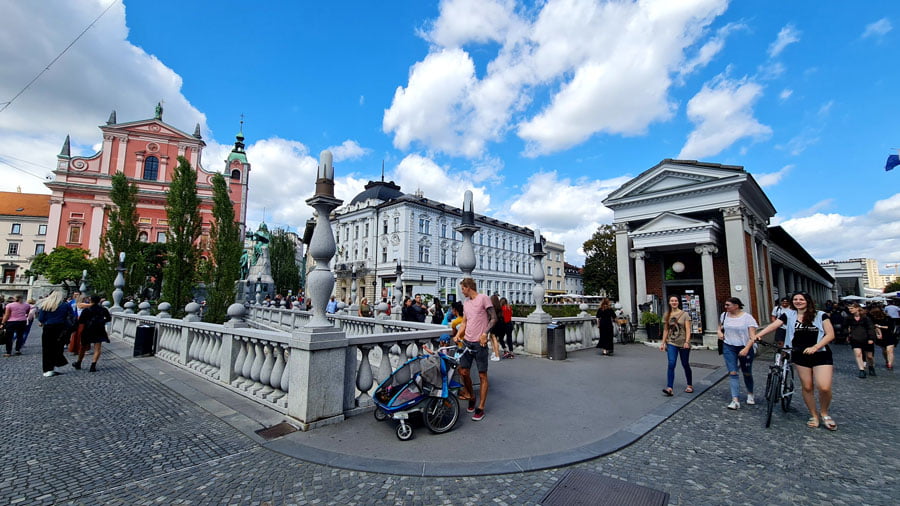 The way to the market

The present Cobbler’s Bridge looked a bit differently before Plečnik’s design. Its covered wooden space was home to cobbler’s workshops, and that is how the bridge got its name. Today the bridge looks extremely charming and in perfect harmony with a line of small colorful buildings. 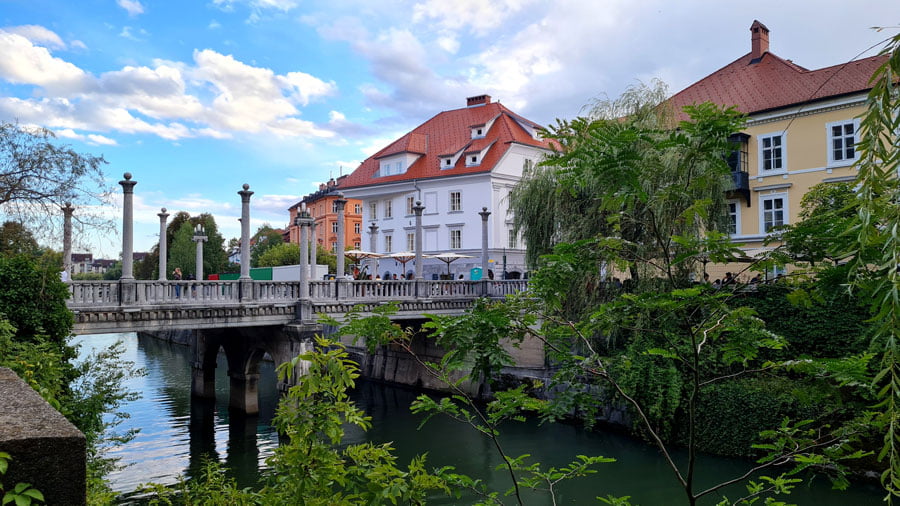 3. TAKE A PHOTO WITH DRAGONS

This bridge was erected at the beginning of the 20th century when Ljubljana was part of the Austro-Hungarian Empire. The former bridge at the same spot was made of wood and named the Butcher’s Bridge. This new one though was Europe’s first reinforced concrete bridge.

The chief attractions are dragon statues that can be seen all over the bridge. 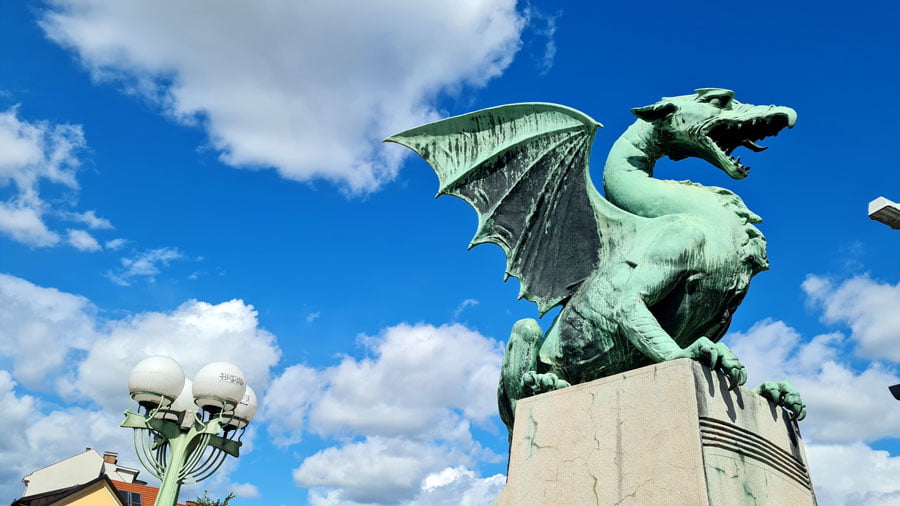 Dragon as a landmark

It’s quite interesting to take a photo here and stroll across the Dragon Bridge – another one of those things to do in Ljubljana. You probably wonder about its name. Well, that is another interesting story. 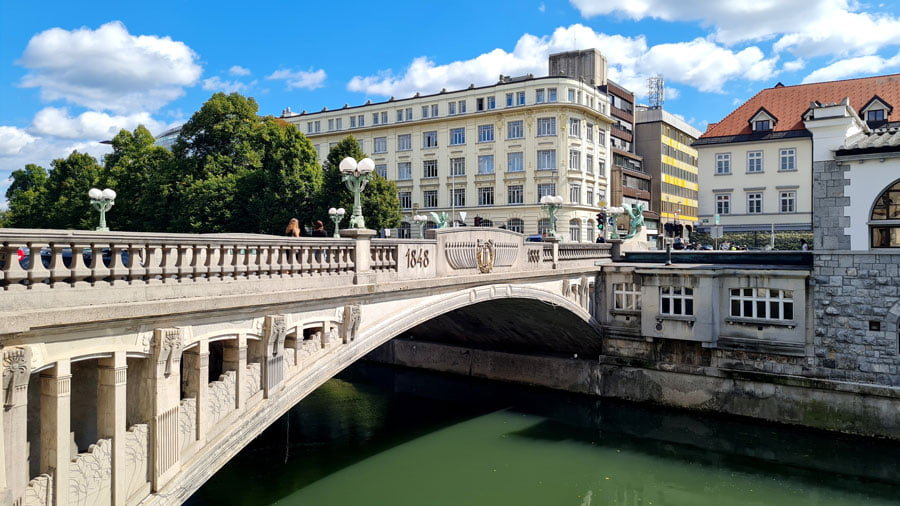 One of the key attractions

Legend says that Jason (remember him from Greek mythology, the one who stole the Golden Fleece?) took his crew, the Argonauts, all the way to Ljubljanica river by boat. They had to dismantle the ship and continue the journey on foot. Nevertheless, the waters here were occupied by a local dragon. Jason killed the dragon and set the foundation for a modern-era construction. 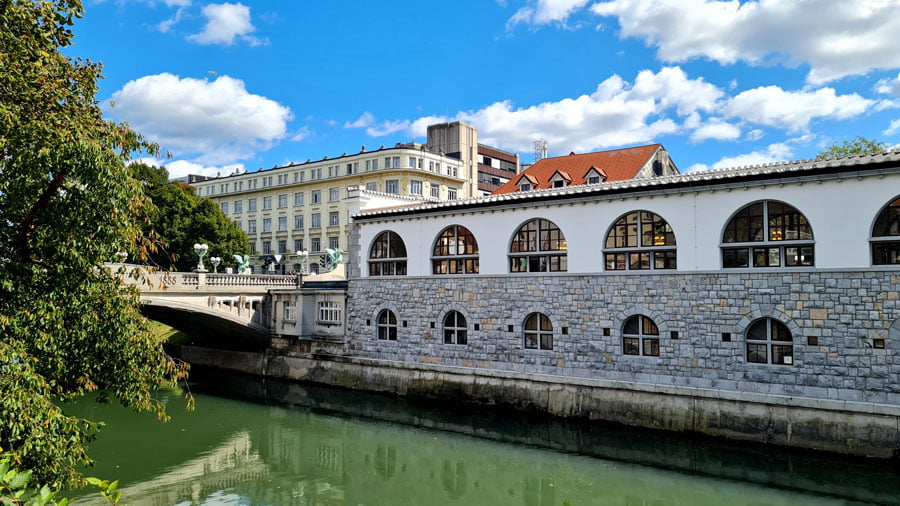 The view from the river bank

Ljubljana’s citizens like to say that it’s not often that a city houses a monument to a poet, rather than to a politician. The central Ljubljana offers exactly that – a large statue dedicated to Franc Prešern, Slovene renowned 19th-century poet and publicist. 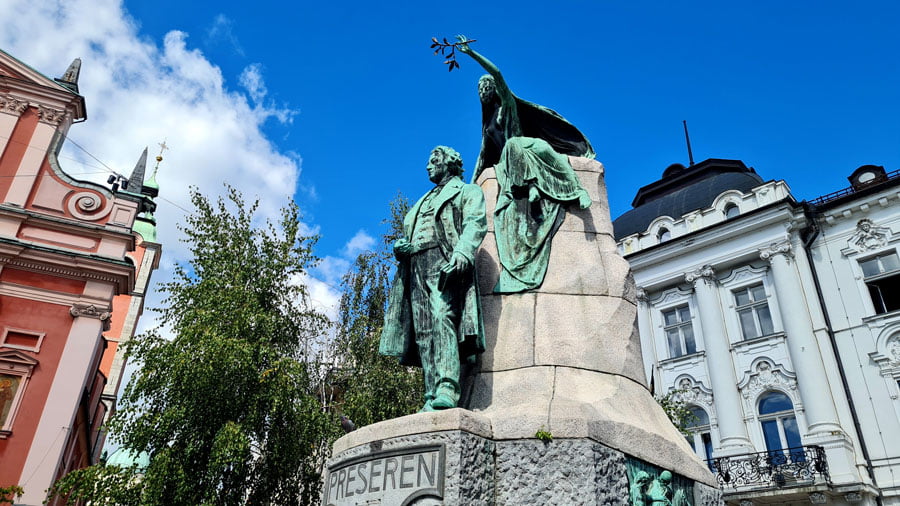 Franc Prešern with his muse

Being the central square, the place is perfect as a meeting point. It’s part of the pedestrian downtown and abundant in charming architecture. Gaze around and try not to miss the building behind the Prešern’s monument. It’s the Central Pharmacy built at the end of the 19th century. 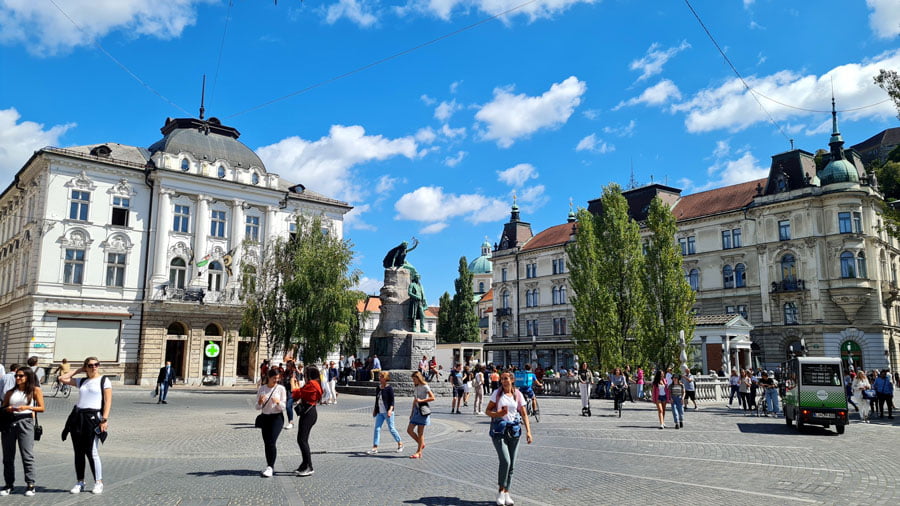 The key landmark of the square is the rose-colored facade of the 17th century Franciscan Church of the Annunciation. It was built even before the square itself was paved. If you prefer to take a walk from here, the square is designed so that surrounding streets gather here and you can choose your direction. 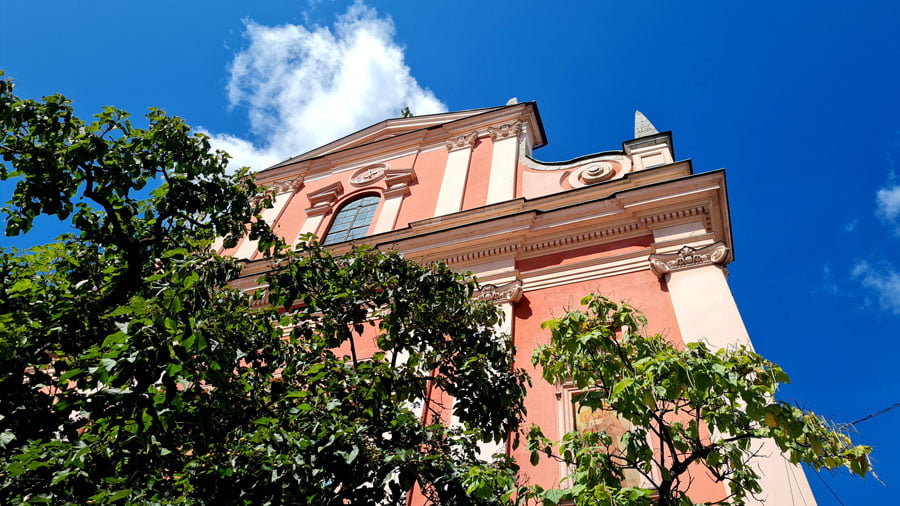 TIP: You can also take the so-called Kavalir, a small eco-friendly vehicle, or an urban electric tourist train that will take you around Ljubljana’s top attractions. 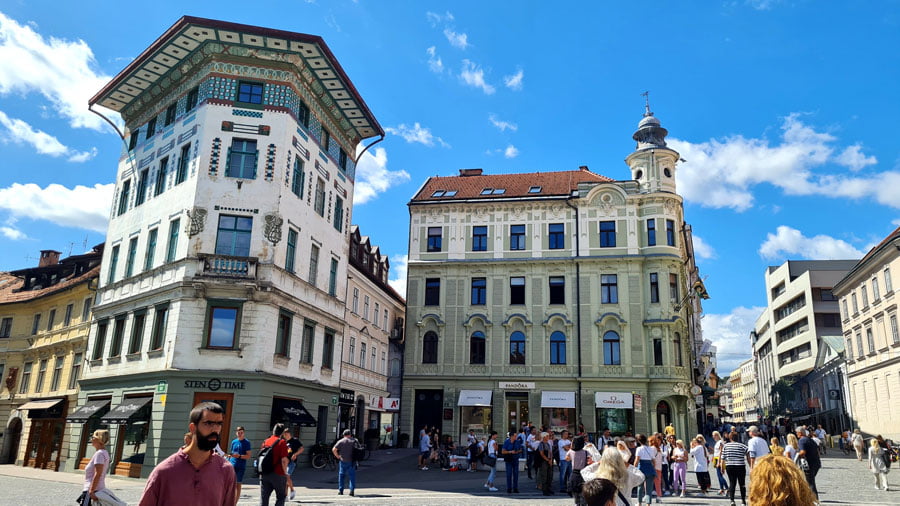 You can’t really go wrong with food in Ljubljana. There are tastes from all around the world but try to take a Slovene dish at least once. 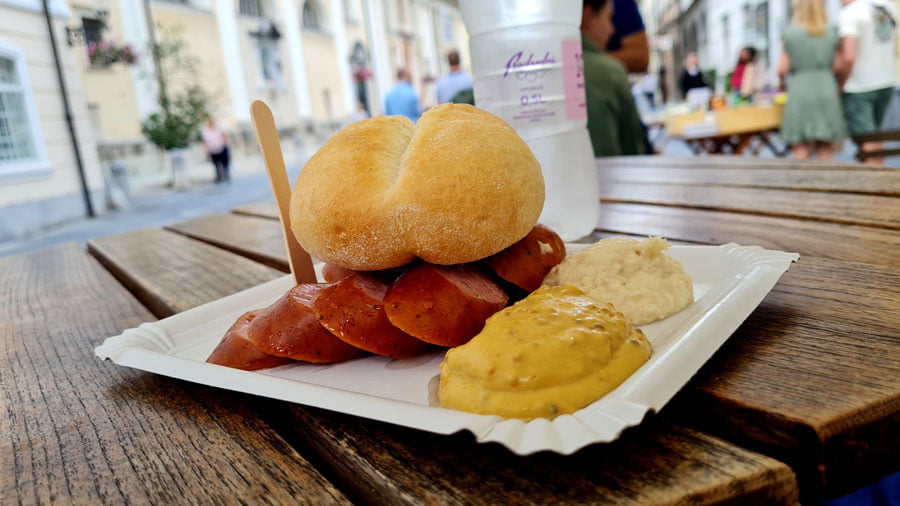 Kranjska sausage along the way

I was recommended to try Kranjska sausage with mustard or horseradish. You can have it in a meal at the restaurant or as fast food. I am not really a fan of sausages so the best option was to have a few slices along the way. When it comes to štrukle though, that’s another story. This boiled strudel comes in a variety of tastes, salty or sugary, with cheese, fruit, or nuts, and it’s just delicious. (I even made it a few times since I came back from Slovenia.) 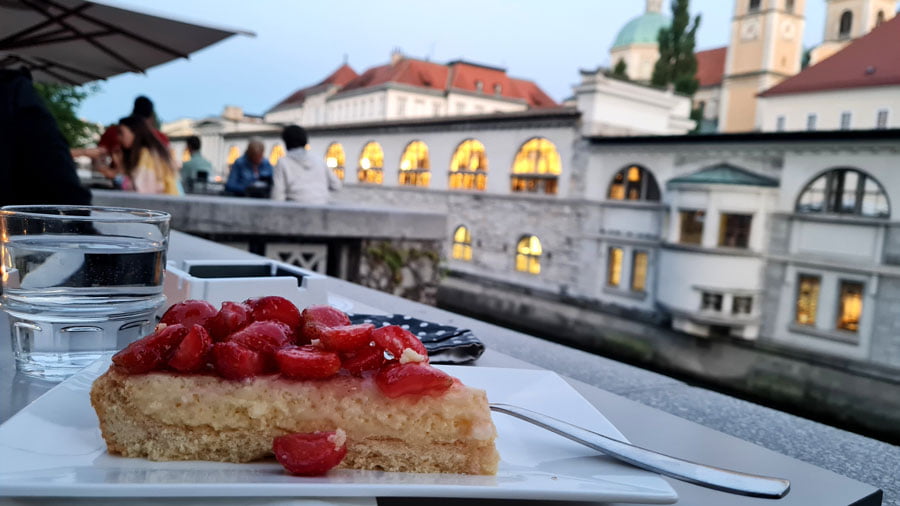 A break with strawberry tart

TIP: I loved my coffee breaks when visiting the city. An apple or strawberry tart with a view of Central Market is just a perfect choice when sightseeing. 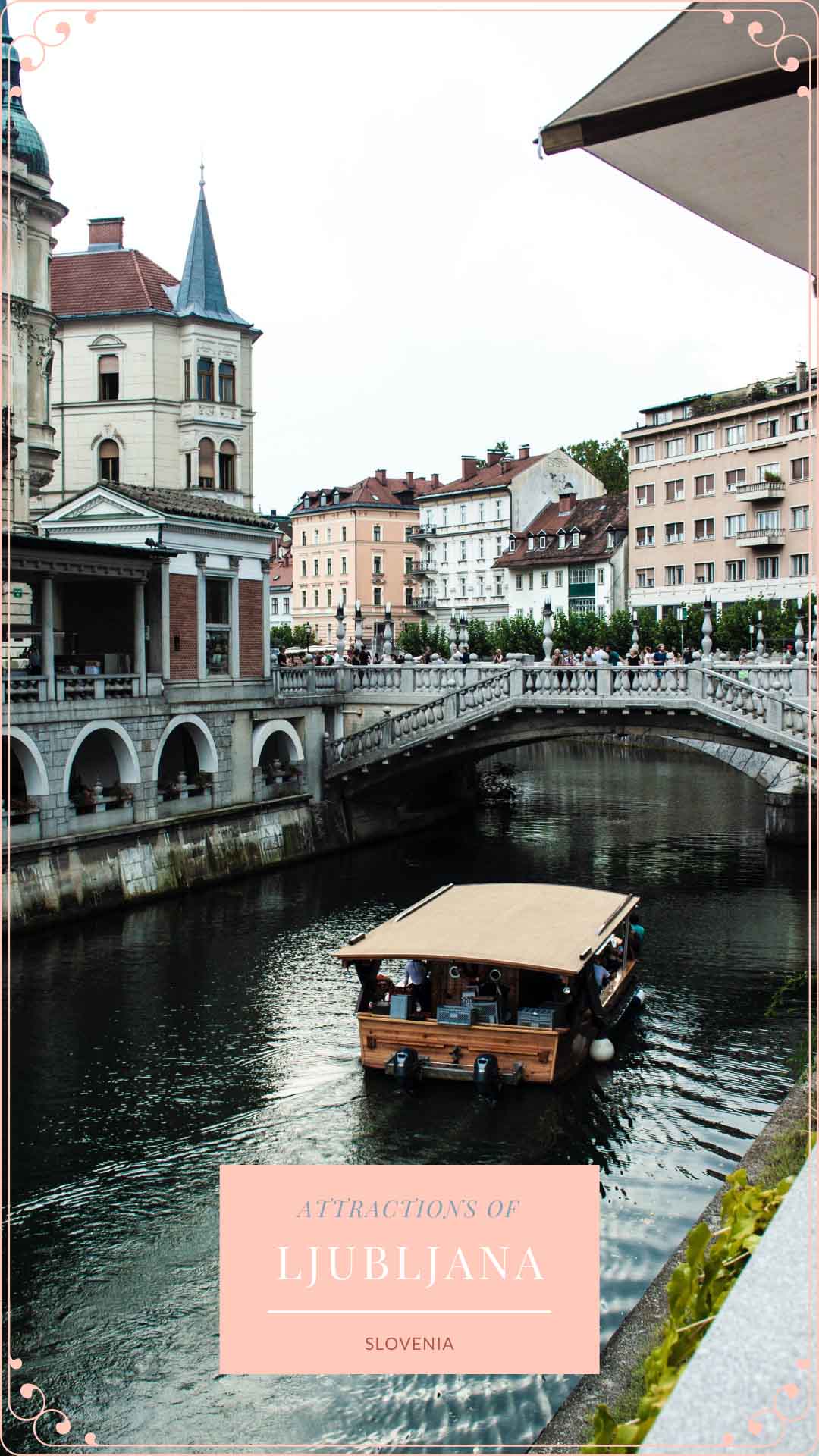 Things to do in Piran 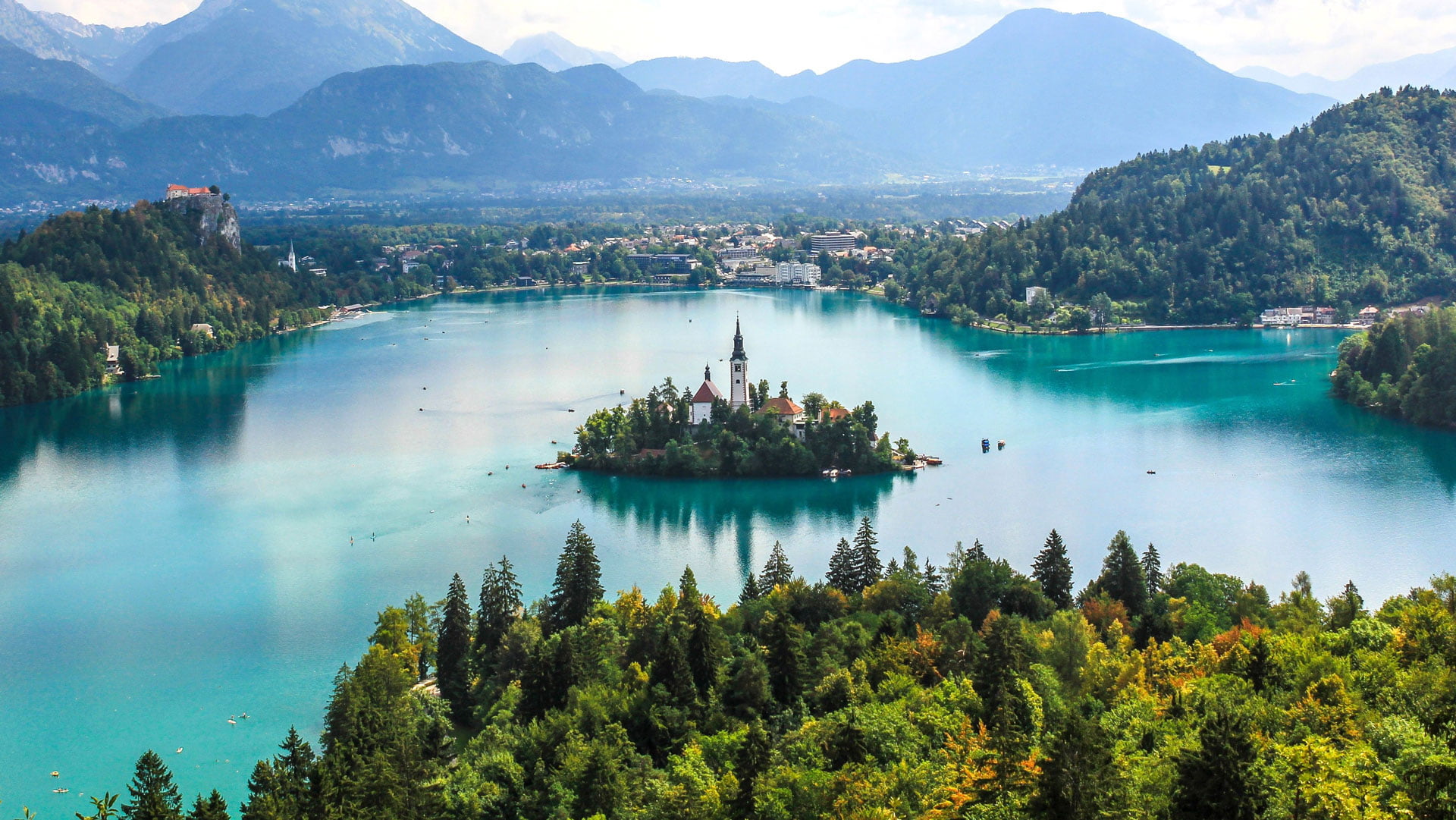