The moment you step onto the soil of Rhodes, it’s immediately clear why they call it the Island of the Sun. The clear sky, the unreal sea color that ranges from turquoise to dark blue, high waves that seem to send out the message that you have come to the place so alive, where nature shows off with all its beauty and strength! Also, it’s almost always sunny.

How Helios got his land

Walking around the harbor

But that’s not the only reason to call the place – the Island of the Sun. Actually, the island of – the Sun god! (Welcome to Greece, right!)

The story goes like this: when Zeus, the supreme god of the Greek mythology, defeated the Giants and became lord of the Earth, he has decided to divide it up among the Olympian gods. Since he has done it during night, Helios, the Sun god was, of course, absent and no one remembered to include him in a draw. Hence, he was left out with no land of his own.

Few people on the beach at first

Helios returned in the morning and complained to Zeus about the injustice. Being one of Zeus’ favorites, he was promised to be rewarded “with the new land that would come forth from the sea”. While he was speaking, a beautiful, flower-strewn island emerged from deep blue waters.

Overwhelmed with happiness, Helios bathed the island in his own radiance and made it one of the loveliest islands in the Aegean Sea. He took the nymph Rhodos, daughter of Poseidon the Sea god, the creature whose beauty he was immediately smitten by, and married her, taking her to his land. 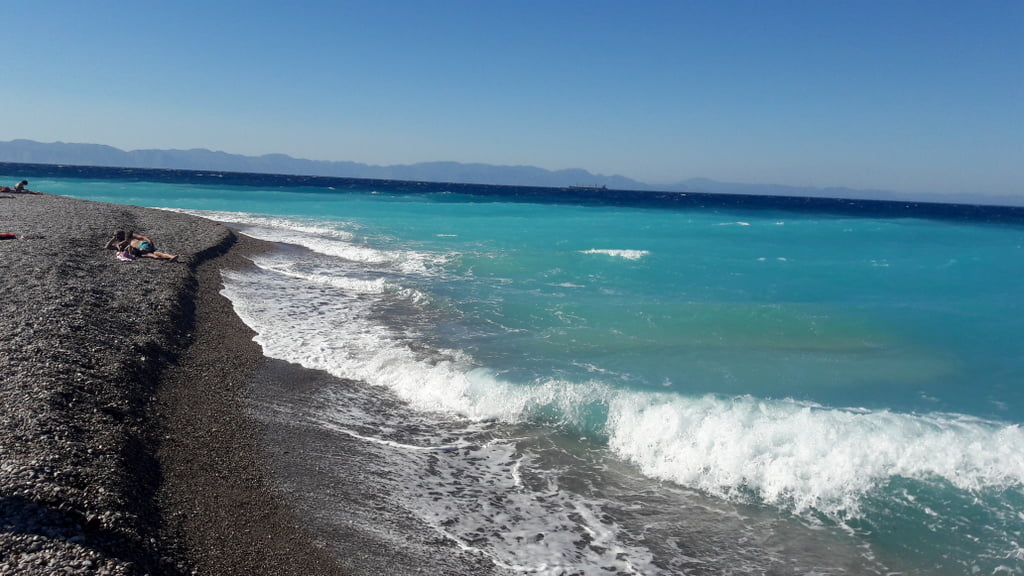 Foaming waves on western side of the island

Hence the name of the island! They had three children who built the largest three towns – Kameiros, Ialyssos and Lyndos.

So, just imagine reading the myth and arriving to the island. It was such a romantic moment, stepping out of the plane a week ago, looking for sunglasses – since the Sun god wanted to state his presence immediately, it seems. Smiled to Helios and was on my way. 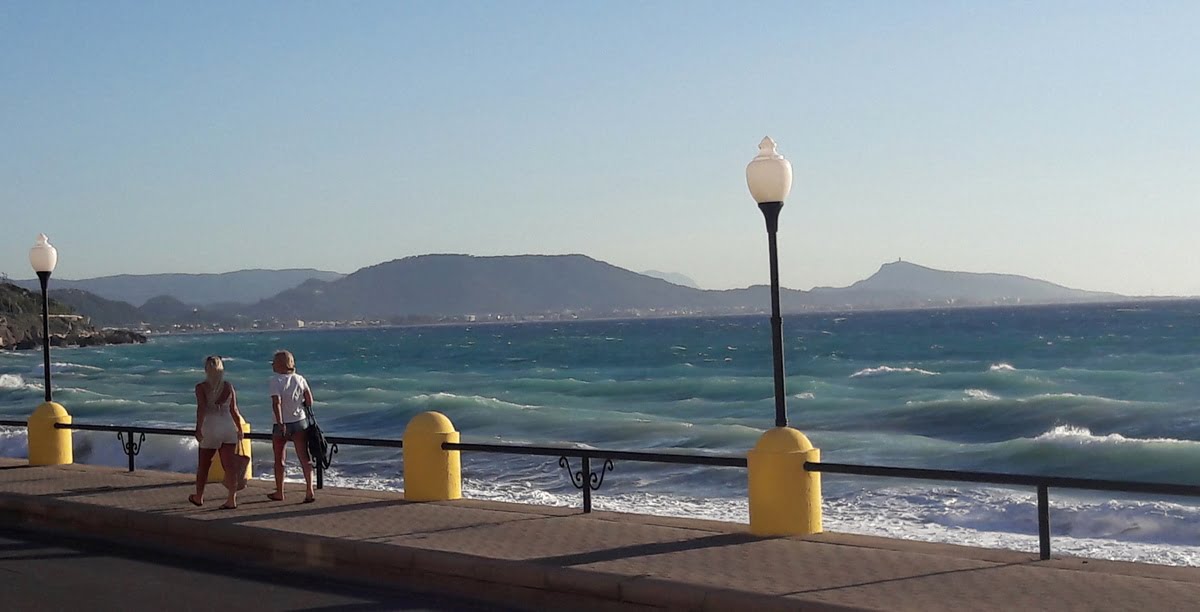 Beautiful walkway along the seaside

Rushed to buy some guide book, which I always do when I travel, since it becomes one genuine souvenir afterwards. (You should see my bookshelf back home!) There was no time to read it all that day, so I just flipped few pages and took a few glimpses of the harbor and the Old Town, and promised myself not to wait too long to go and explore. I rather went for a walk along the beachfront. That was one powerful sight to witness! Huge waves of turquoise water were crumbling towards the shore, leaving that rustling sound behind and the whitest foam sliding up and down onto the beach. 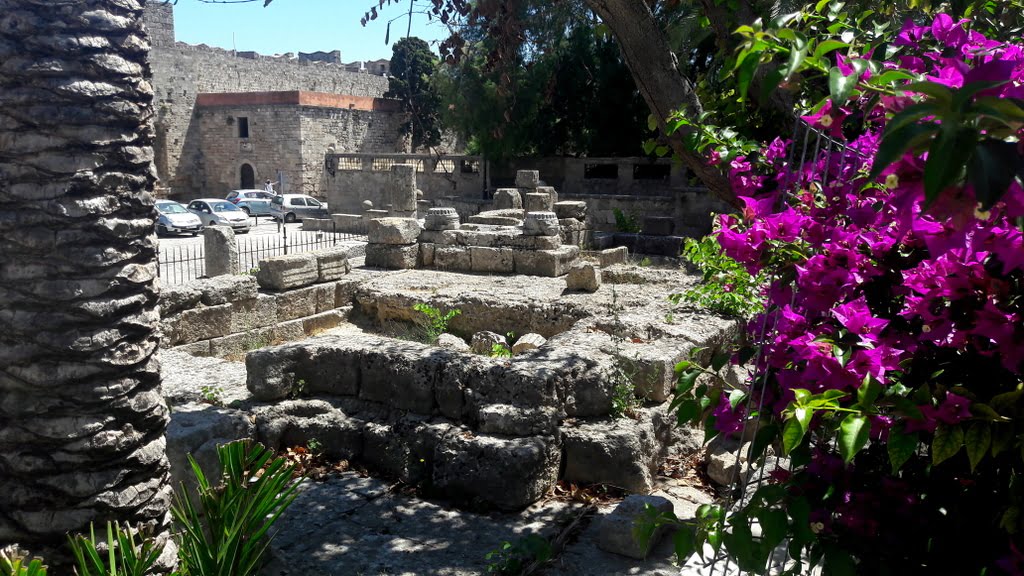 Ruins of the Aphrodite Temple in the city

Hey, it just came to me then, Aphrodite the goddess was born out of the sea foam. The event occurred  in Cyprus, but still, it must have been a foam such as this, so thick and so white, fit for a god! My thoughts went further, towards one other goddess whose fame was somewhat preceded by the one of the statue of her. That was Nike Samothrace, the goddess of victory, we all well know because of the famous statue with no head and arms, the statue that is housed by the Louvre Museum in Paris. Remember standing in front of it like hypnotized years ago, mesmerized by its beauty. 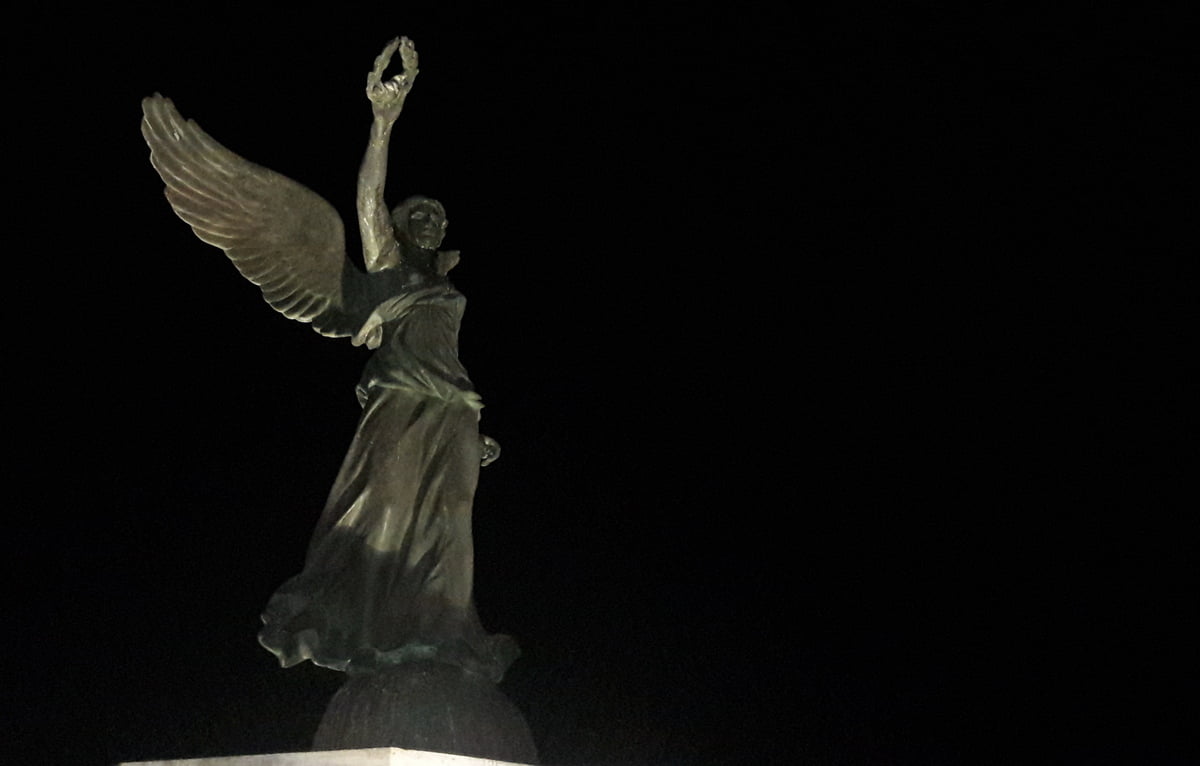 Replica of the statue of goddess Nike in Rhodes

And you know what! It is believed that the famous artist of Lindos in Rhodes is actually responsible for this masterpiece. His name was Pythokritos, and I didn’t think twice, but went to visit his hometown three days ago (more about it in Glimpses to come). Also, when you come to the harbor of the island’s capital, try to look around and you will not miss it, there stands another Nike, proudly referring to the famous sculptor. Being recent, this statue has a head on its shoulders, both arms, and its wings are intact. 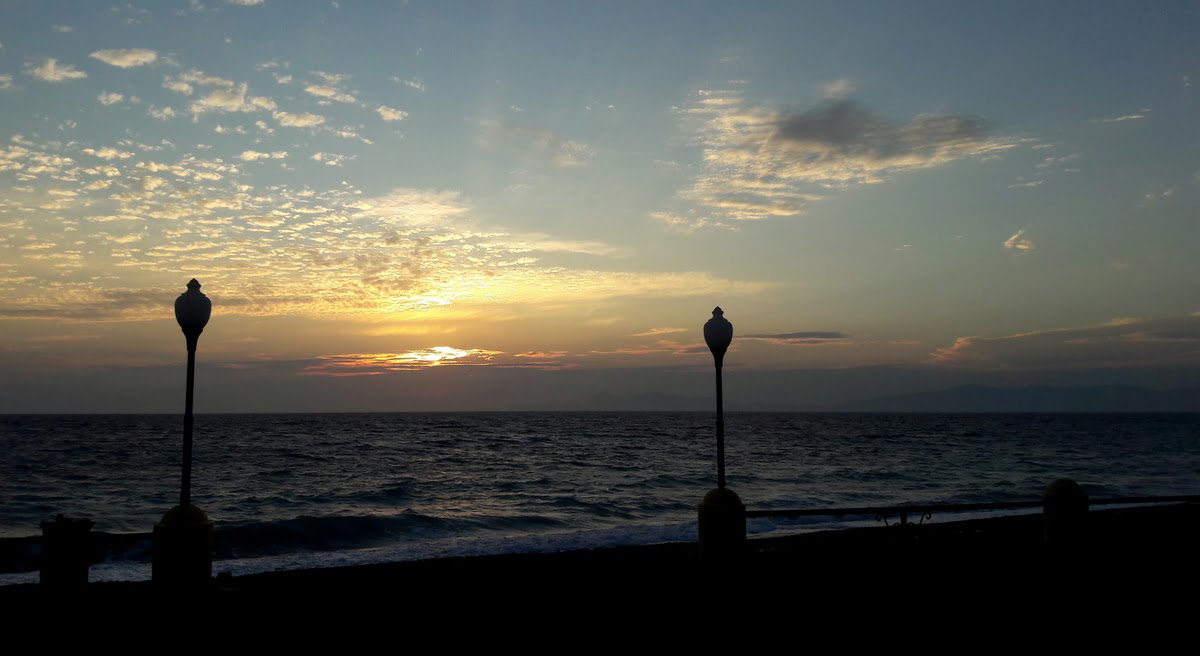 The Sun god sure knows how to impress

Amazing fact, isn’t it! Those are small anecdotes, Glimpses, I am always thrilled about when traveling. You always learn something new and priceless if you allow yourself to be open, to explore. Then even those waves become somewhat different. Look, maybe the nymph, the daughter of the Sea god Poseidon her self, is just waving back from another foaming wave!

Smiled to myself, while trying to fight that water crumbling towards me, another huge wave that was pulling me down… 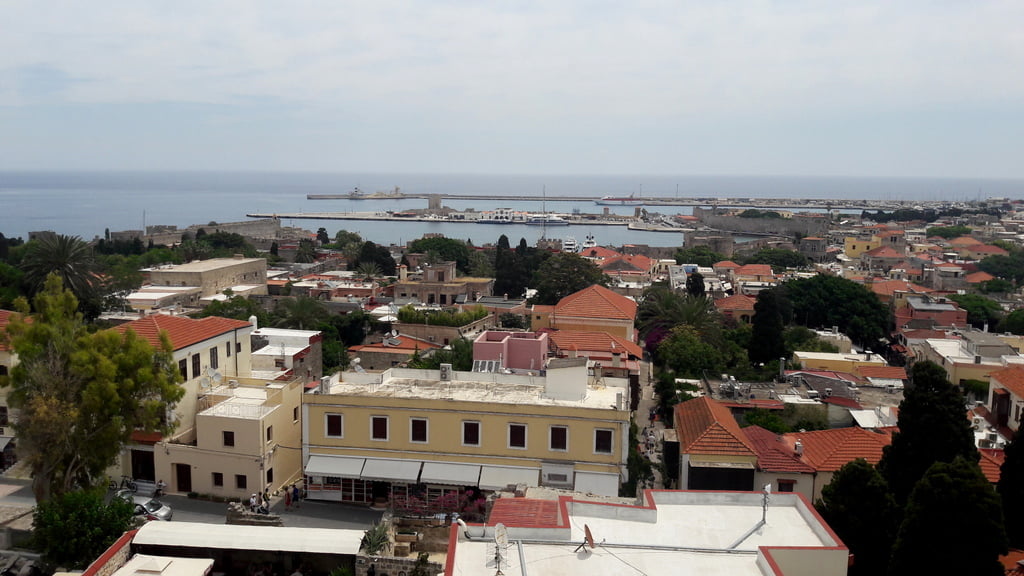 View of the city from the Old Town

I actually don’t think that there was anyone else in the sea that afternoon. Few people were lying on their sunbeds, the rest of the beach was empty. And nobody was swimming, it was just too windy. They say it’s always windy in this part of the island, at the very peak looking over to Turkey, and along the west coast in general. While the east coastline is always perfect for spending time on the beach.

But that nymph “peeking” from the sea was just too alluring for me, I had to at least give it a try.

And I had a blast!

Next: JUST THE RIGHT VACATION TIME (2) 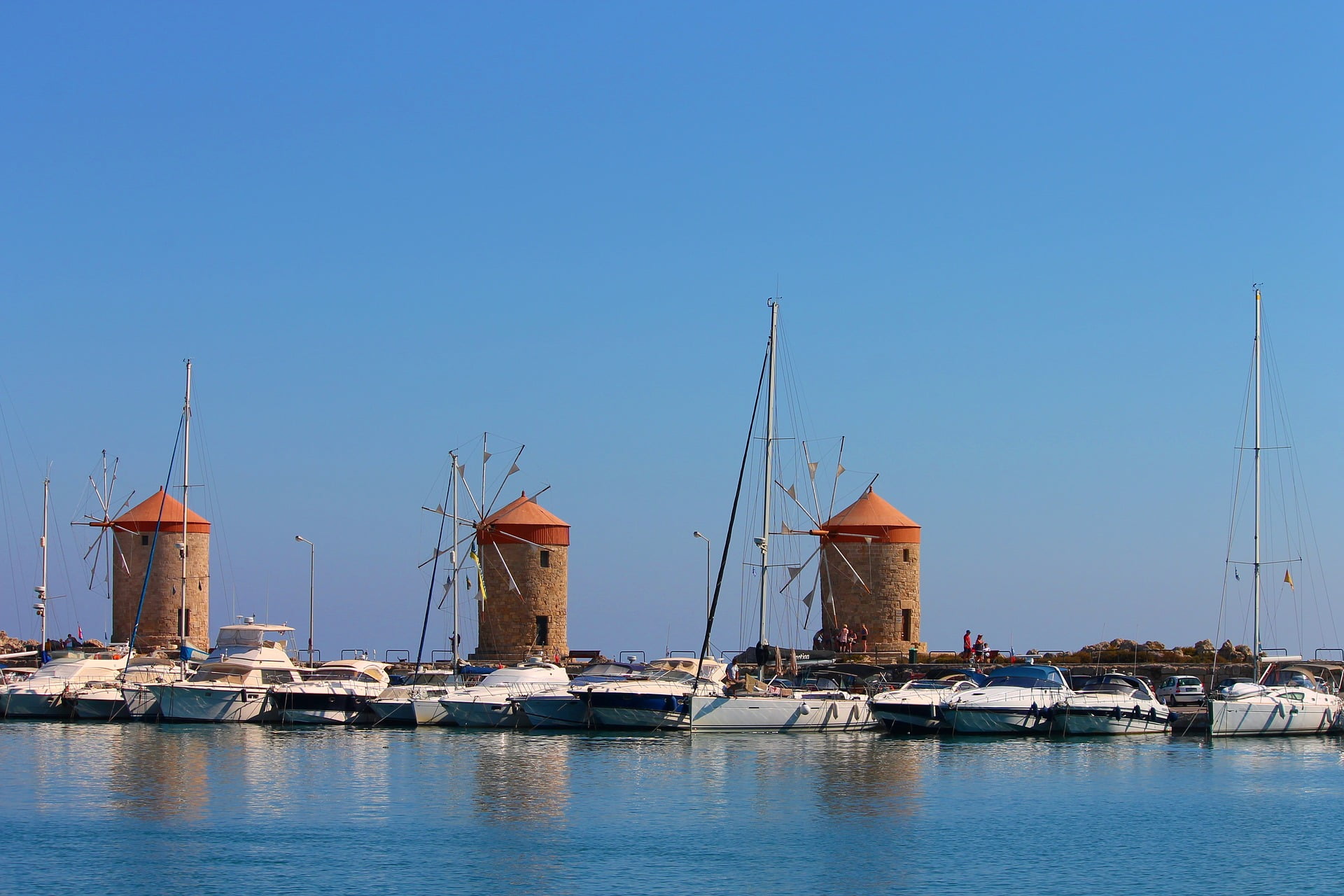 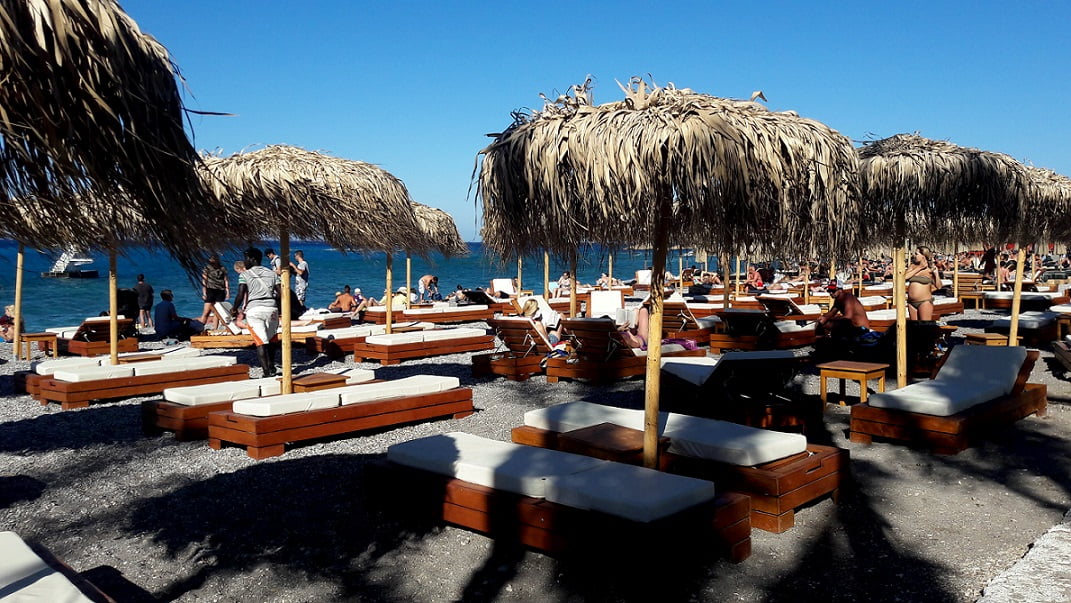