Cuban rum has been popular since the 1500s. The one pirates loved and drank a lot is not the same as the one we can buy. (And I didn’t know anything about Cuban rum before I came to the country.) That ancient one was bitter and with a high percentage of alcohol. Still, pirates did love to put sugar and a few herbs in it.

This mixture called draguecito or “a little dragon” is probably the ancestor of the famous mojito, one of the most famous Cuban cocktails we enjoy today worldwide. 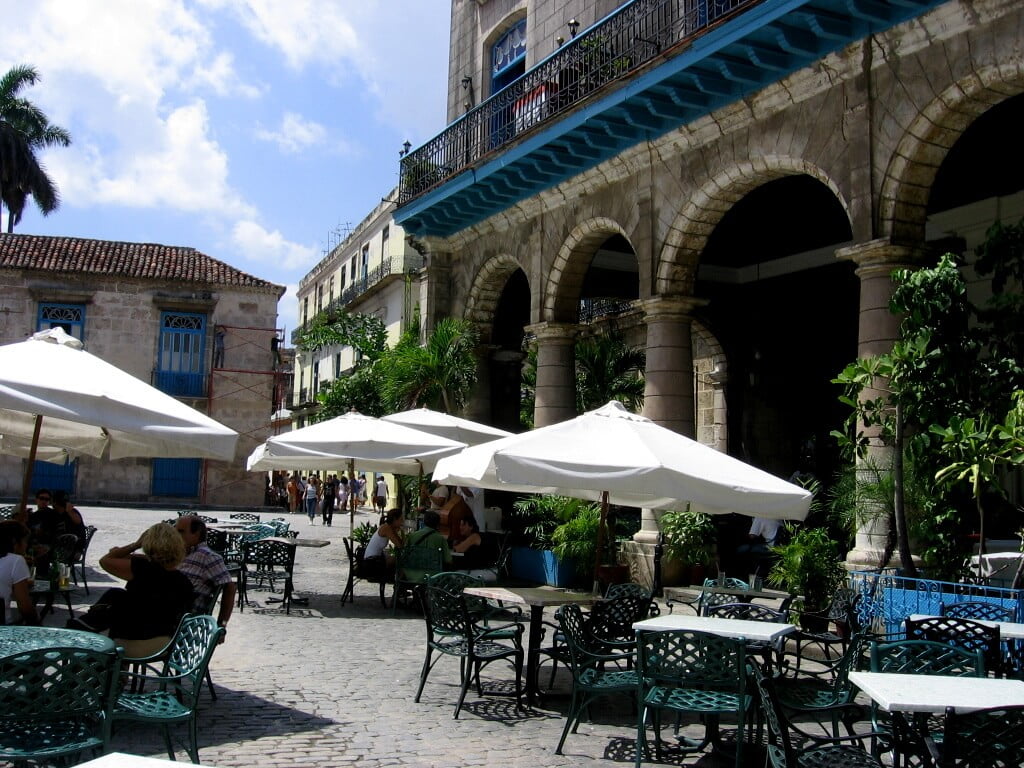 For those of you who don’t know much about it, here are a few details on how to make it. It comes in a big glass where white cane sugar is mixed with lime juice and crushed stem of mint. They add white rum and the glass is filled with sparkling mineral water and chopped ice.

And you know where the temple of mojito is located? In Havana, of course. So, when you visit Cuba, make sure to come here for a drink, and here is why. 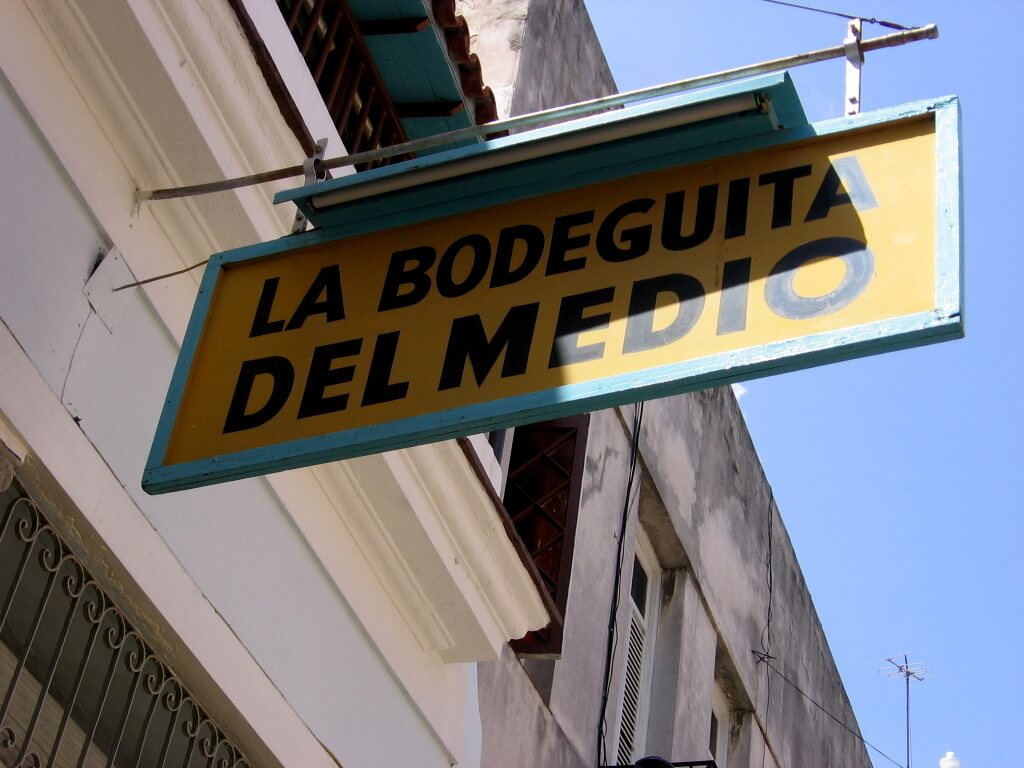 A famous bar in Havana

The famous cafe La Bodeguita del Medio is situated in Habana Vieja (Old Havana). This is a must when you come to Cuba, so when you go to Plaza de la Catedral (more about the Old Havana in one of the next Glimpses), and you stand in front of the Catedral de San Cristobal, you should turn left in Calle Empedrado. At the halfway point there you will find this legendary restaurant. La Bodeguita del Medio literally means “a little shop in the middle“. 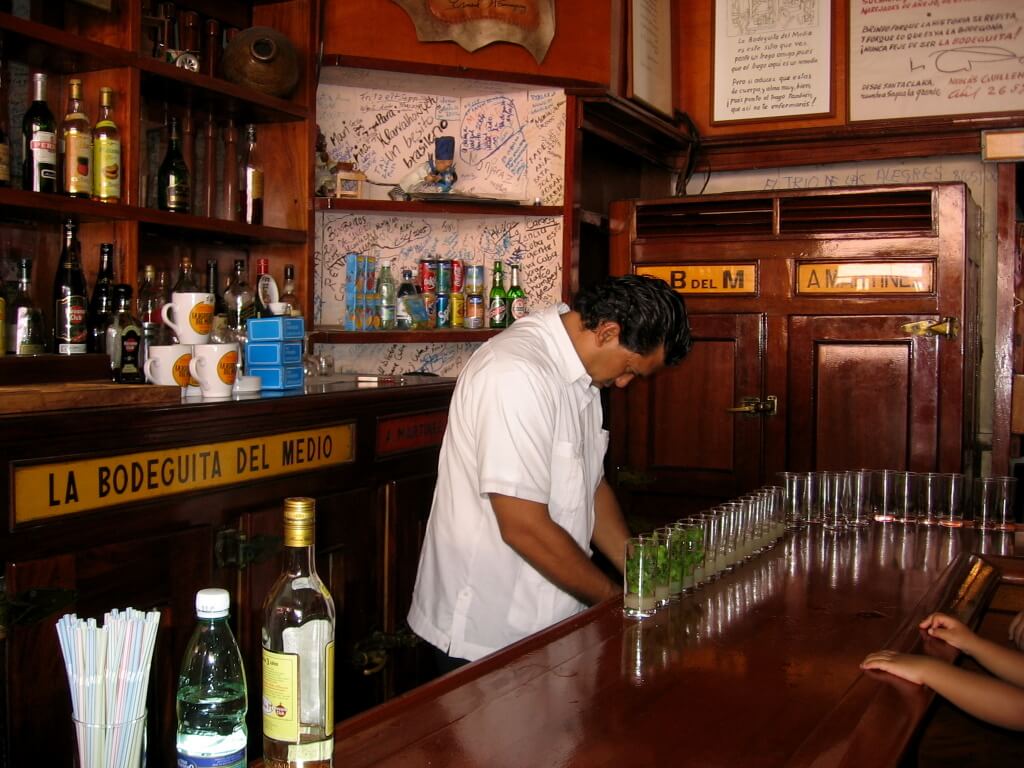 The place was founded in 1942 as a food shop. A bar serving alcoholic drinks was added later and the place became a haunt for intellectuals, artists, and politicians. Today this is a bustling bar serving shots of Cuban rum and cocktails, along with some typical Creole dishes.

The walls are plastered with photographs, drawings, inscriptions, and visitor autographs, including those of Nat King Cole or Gabriel Garcia Marquez. And Ernest Hemingway, of course, who was a regular here and made the place so famous worldwide. 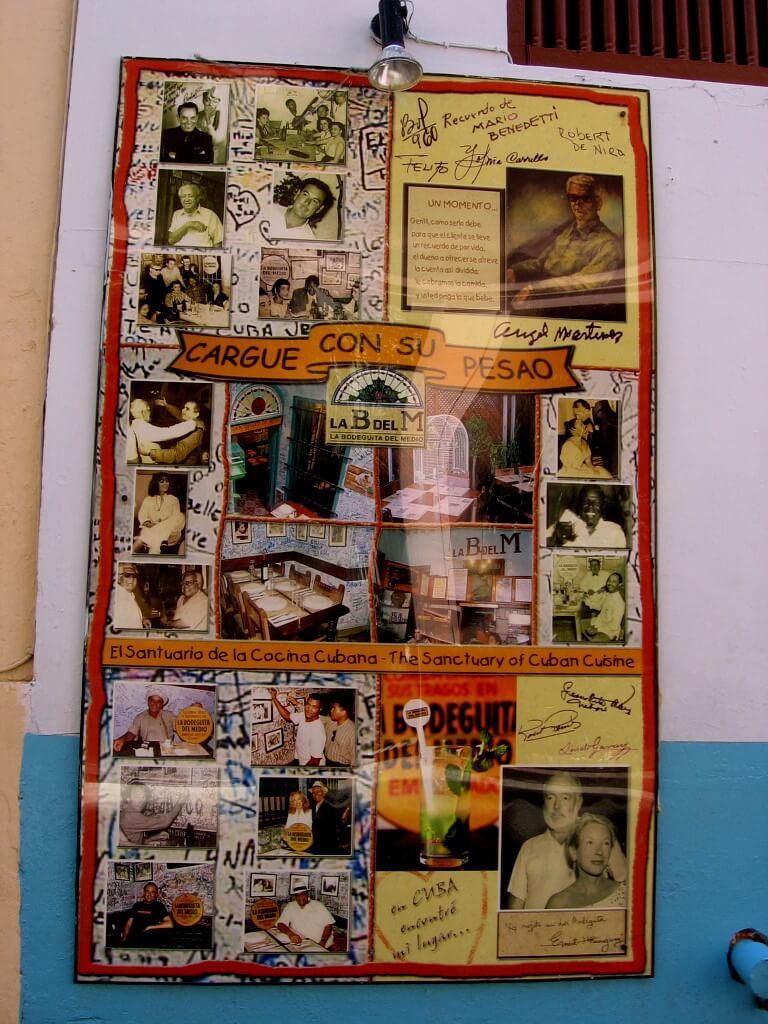 So, in the previous Glimpse, we covered Hemingway’s 20 years in Havana when he bought the house in the fishermen’s neighborhood, which is now a popular museum. But, before he found the Finca La Vigia villa, he was in Cuba for the whole year, in 1939. During that time he stayed at Havana’s hotel Ambos Mundos, another must-see in Old Havana. 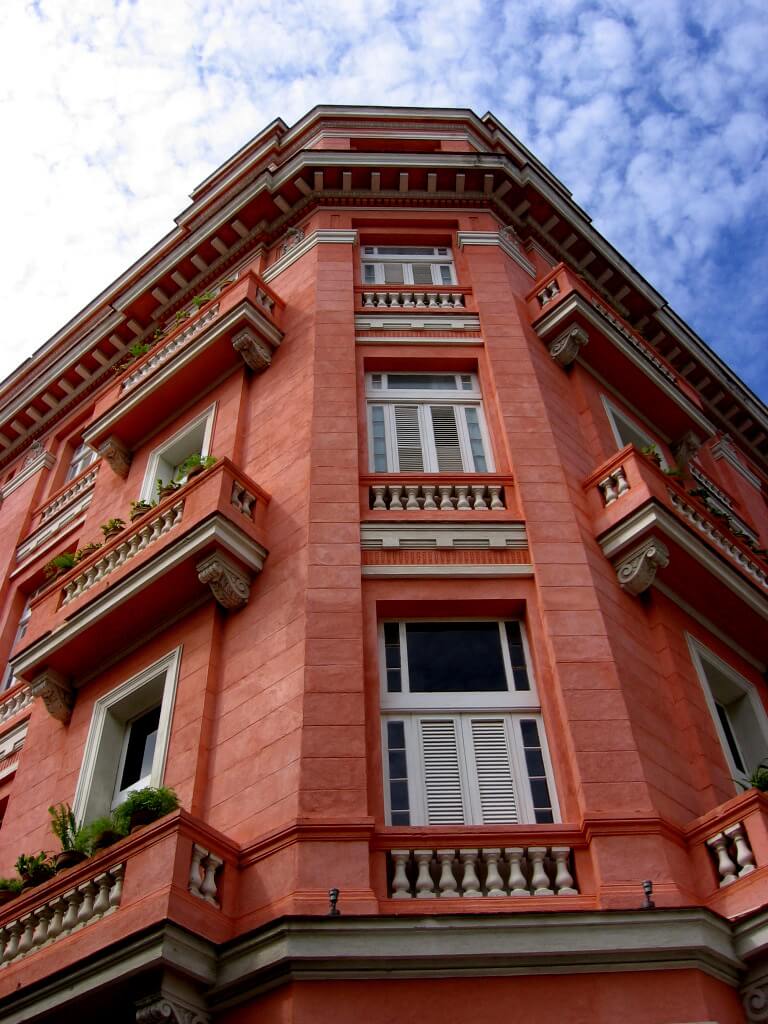 One of Hemingway’s passions was Cuban rum and he enjoyed cocktails. Conveniently, his hotel was not far from La Bodeguita del Medio where he spent a lot of time here drinking mojito. You will find a few photos of him accompanied by belated Cuban president Fidel Castro on the wall of the bar, along with his inscription saying “My mojito in La Bodeguita, my daiquiri in El Floredita”. 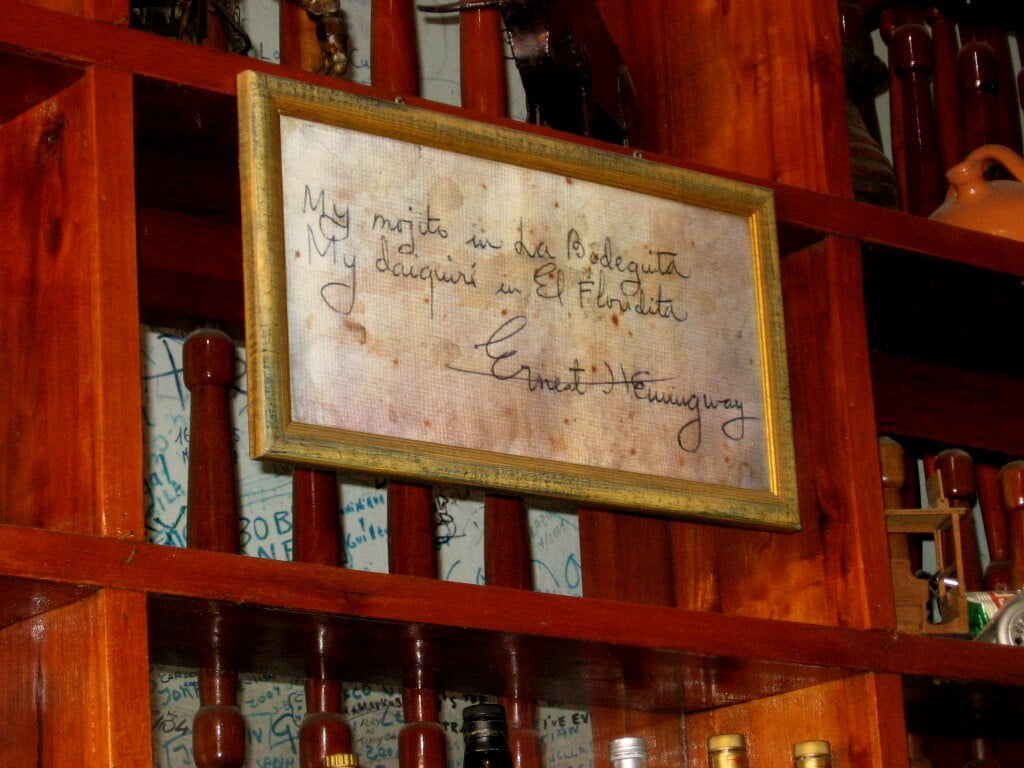 So, my next stop was El Floridita restaurant, of course. The additional reason was that they say that Hemingway helped invent daiquiri as it is served today.

It’s not hard to find it. You stroll along the popular Calle Obispo, where the Ambos Mundos is, and just keep walking a bit further. Remember that this restaurant was also close to the hotel. Looking from the street, you can immediately see that this is a charming bar. 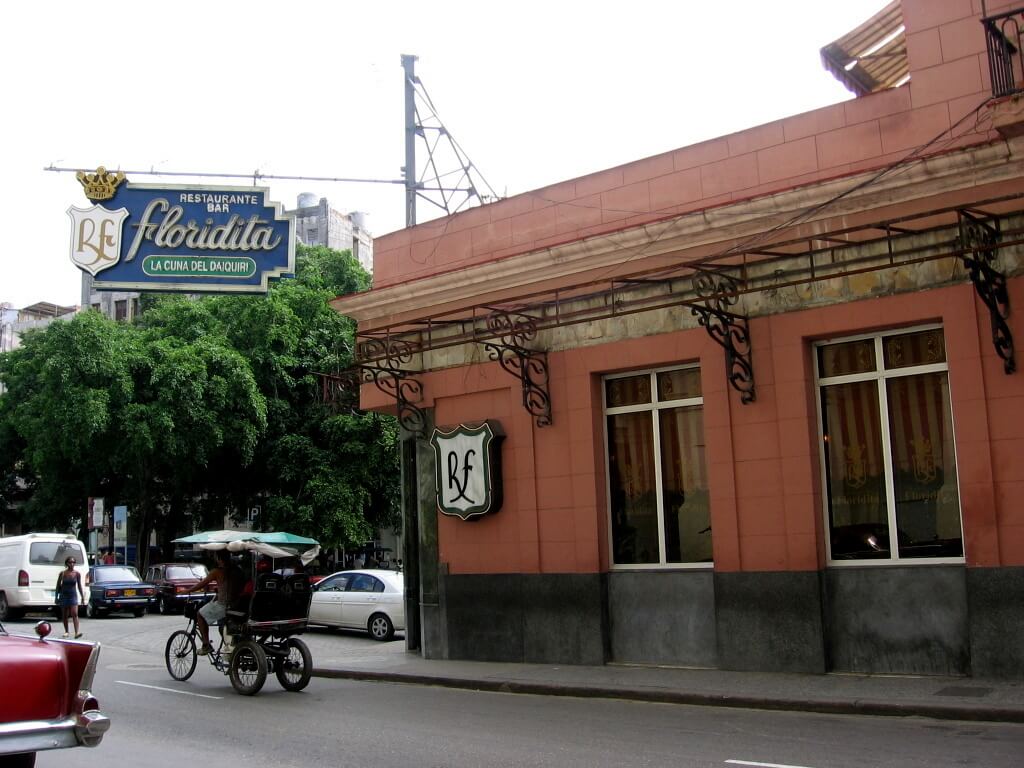 El Floridita as seen from the street

And when you go in, Hemingway will greet you himself. There is a life-sized bust of the great novelist, sculpted by Fernando Boada while the author was still alive, represented as standing at the bar. As if you can have a drink with the man.

They say that the famous daiquiri cocktail was devised here by barman Constante with a little help from Hemingway in the 1930s. It’s served in a chilled cocktail glass. If you are wondering about the daiquiri recipe, here is a hint: white rum is first blended, mixed with sugar, maraschino, lime juice, and crushed ice. 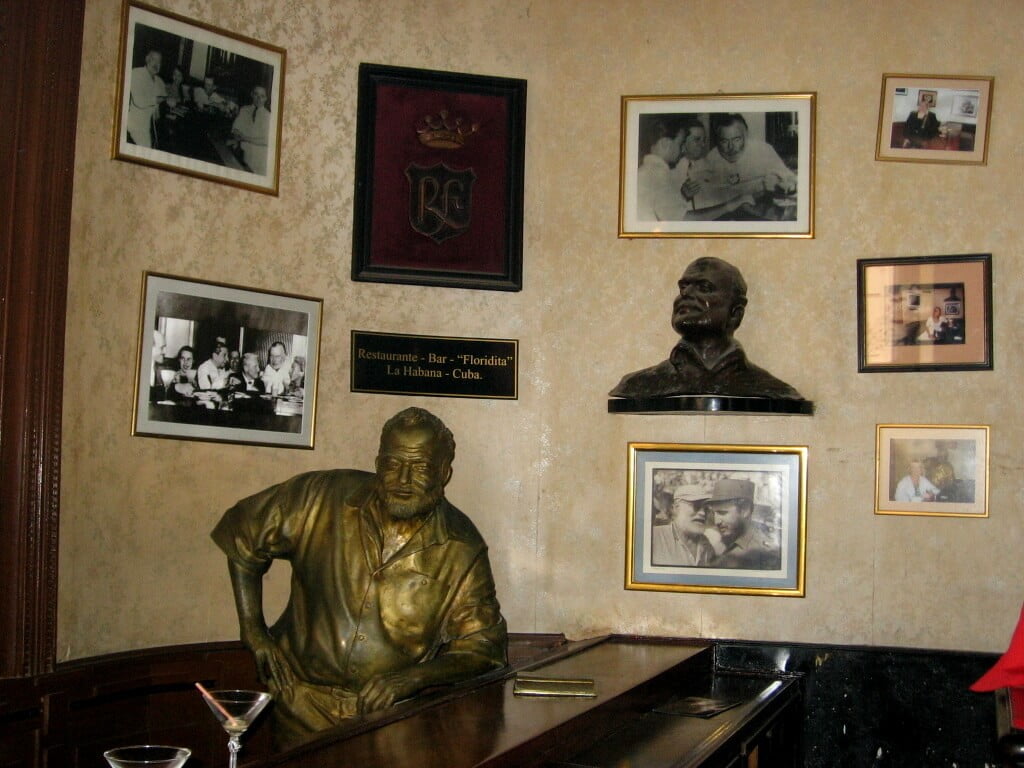 A statue of Hemingway at the bar

To tell you the truth I didn’t think about Cuban rum before coming here, nor cocktails for that matter. But when in Cuba, you just have to try a few of those popular ones. I was pleasantly surprised that the drinks were soft, with a low percentage of alcohol, tasty, and refreshing. 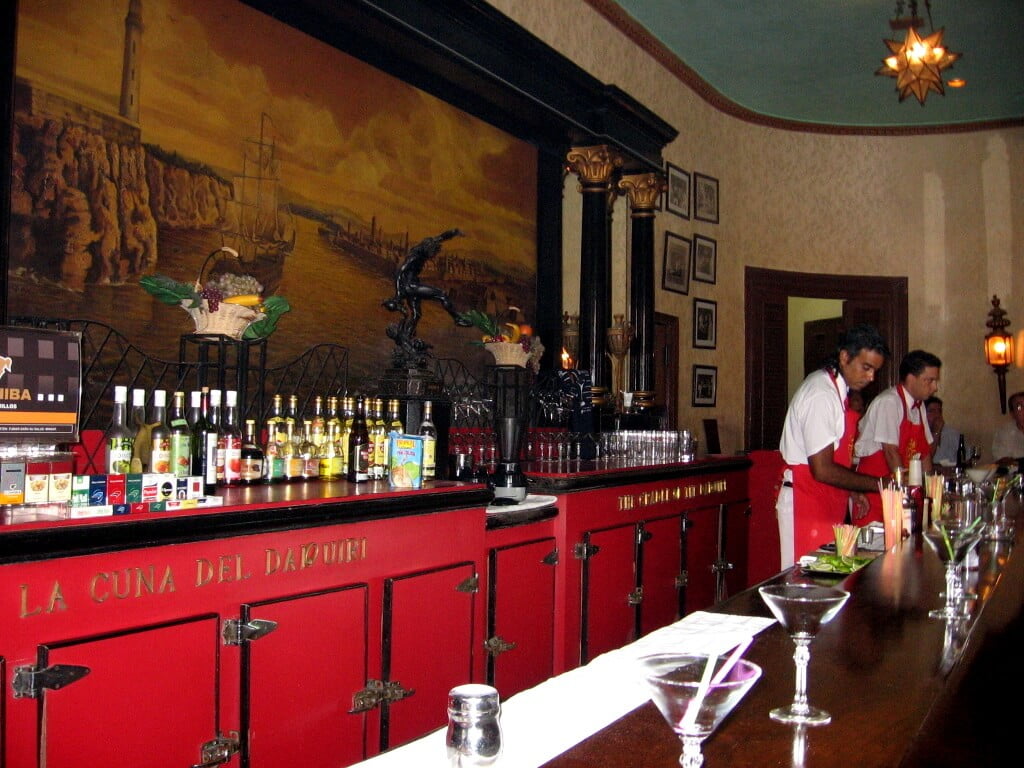 I read somewhere that Cuban rum was in use here since the 1500s when an impure distillate was first obtained from sugar cane. It was popular among pirates and in the 1920s, during American Prohibition, Cuba – which has become an “off limits” paradise for drinkers – refined those early cocktails and created new ones. One of those we probably all heard of is Cuba Libre (meaning “free Cuba”) made from Cuban rum and Coca-Cola mixed with ice and lime juice. 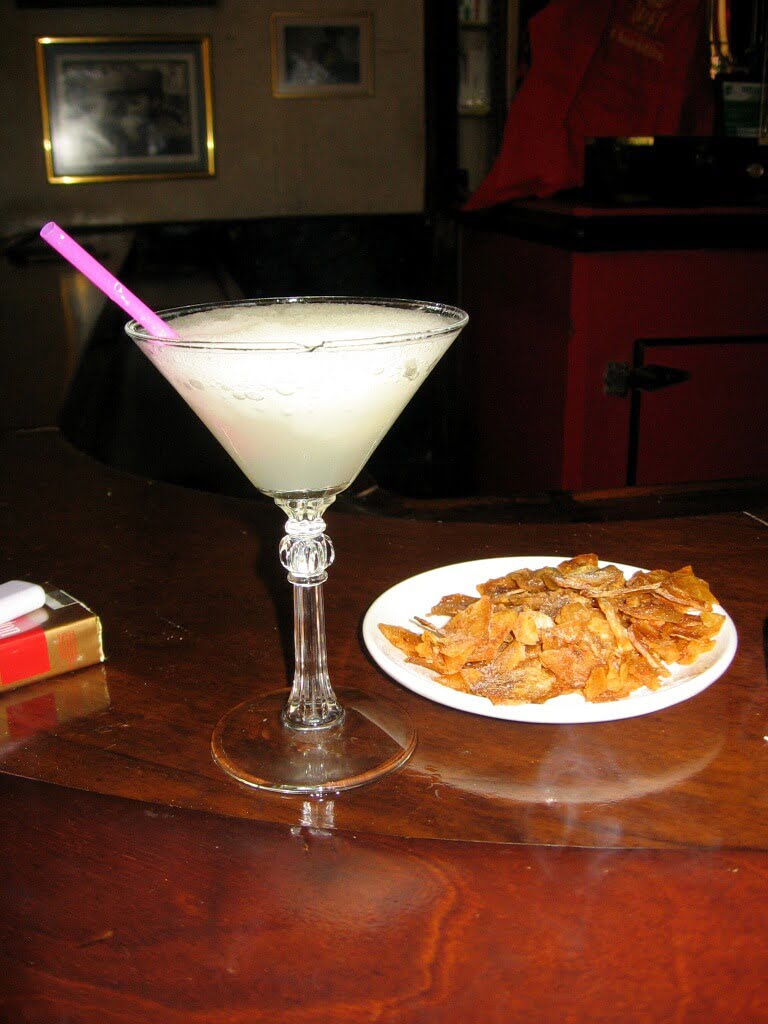 A glass of the famous daiquiri cocktail

One of the obligatory stops related to Cuban rum is also the Fundacion Destileria Havana Club. (Keep in mind that Havana Club is not the only brand of Cuban rum, although it is the most popular among foreign tourists. Locals usually drink other brands.) Here you will learn everything about distillation, oak barrels, and different types of rum. Silver Dry rum is often used in cocktails while the old rum should be poured neat. Entrance into the Fundacion

You see how Cuban rum is truly a tradition, a part of everyday life. And what better place to have a glass of that refreshing cocktail than – at the beach! That’s where we’re heading next.

Next: OFF TO THE BEACH, CARIBBEAN STYLE! (5) 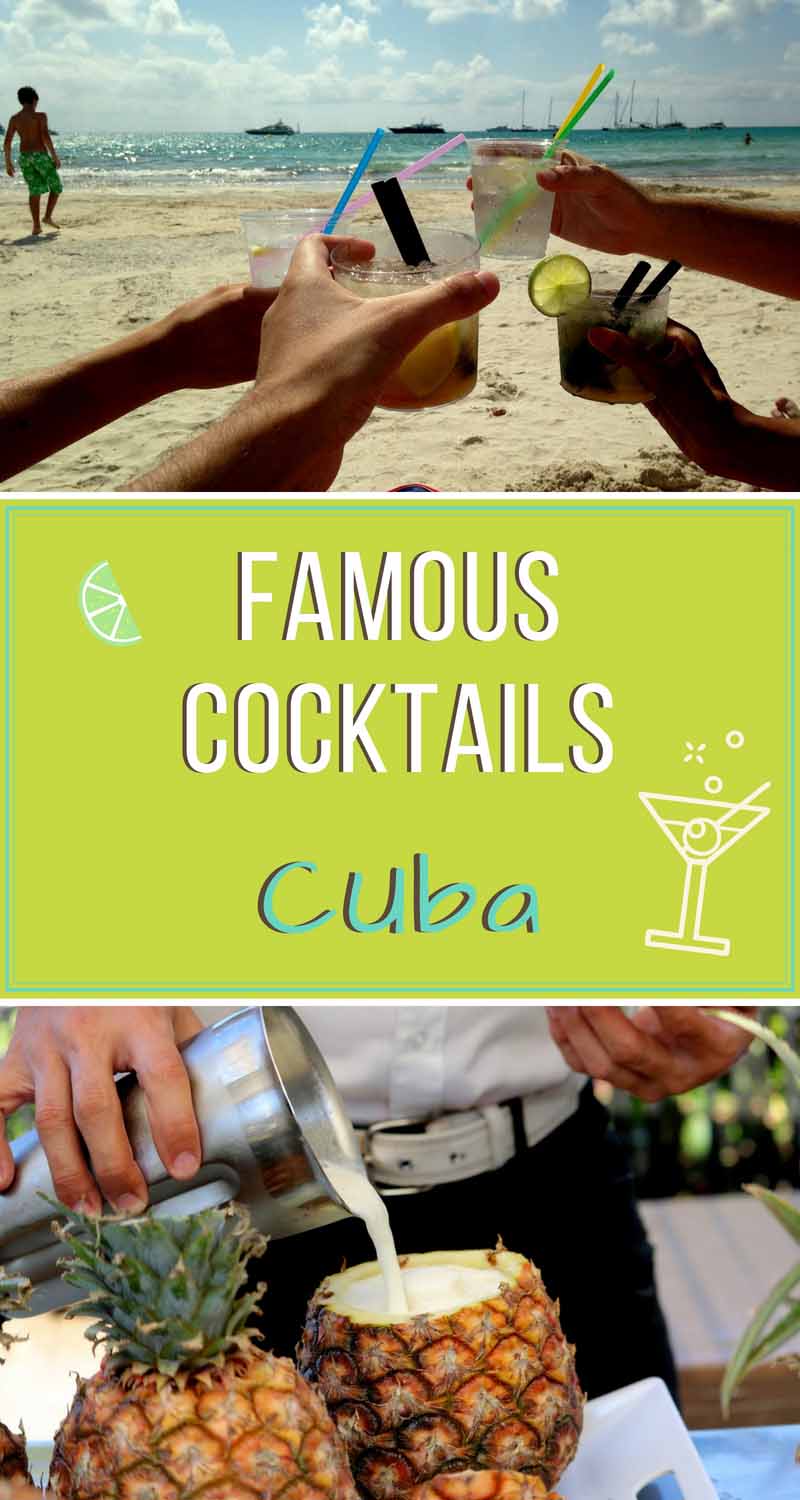 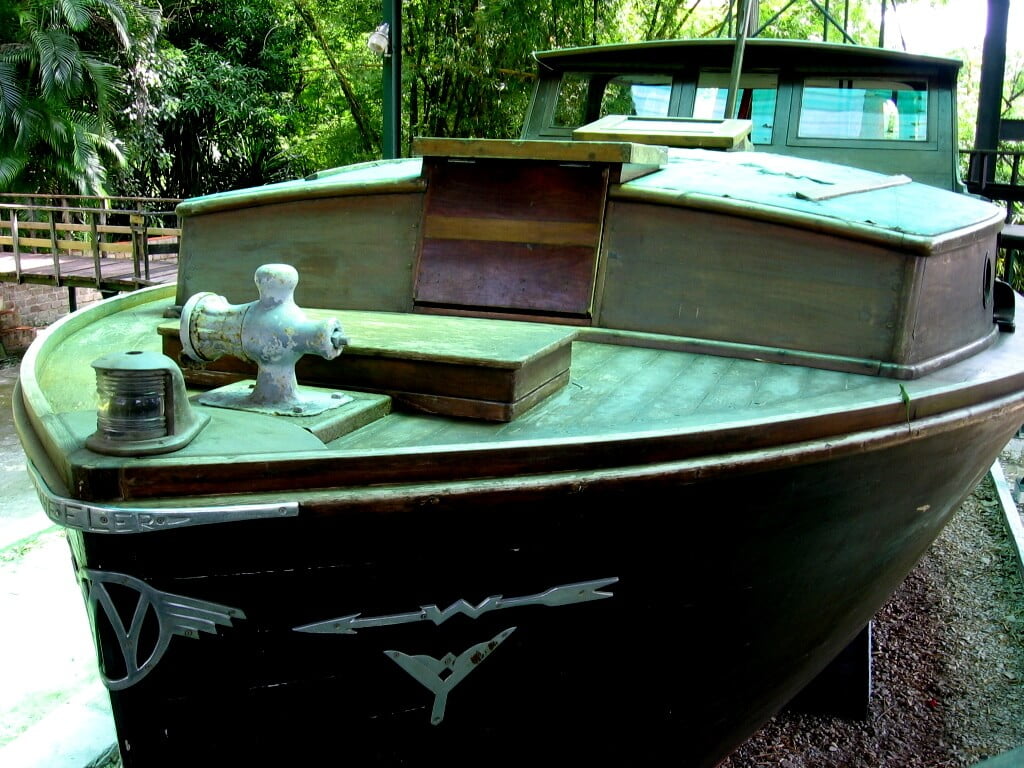 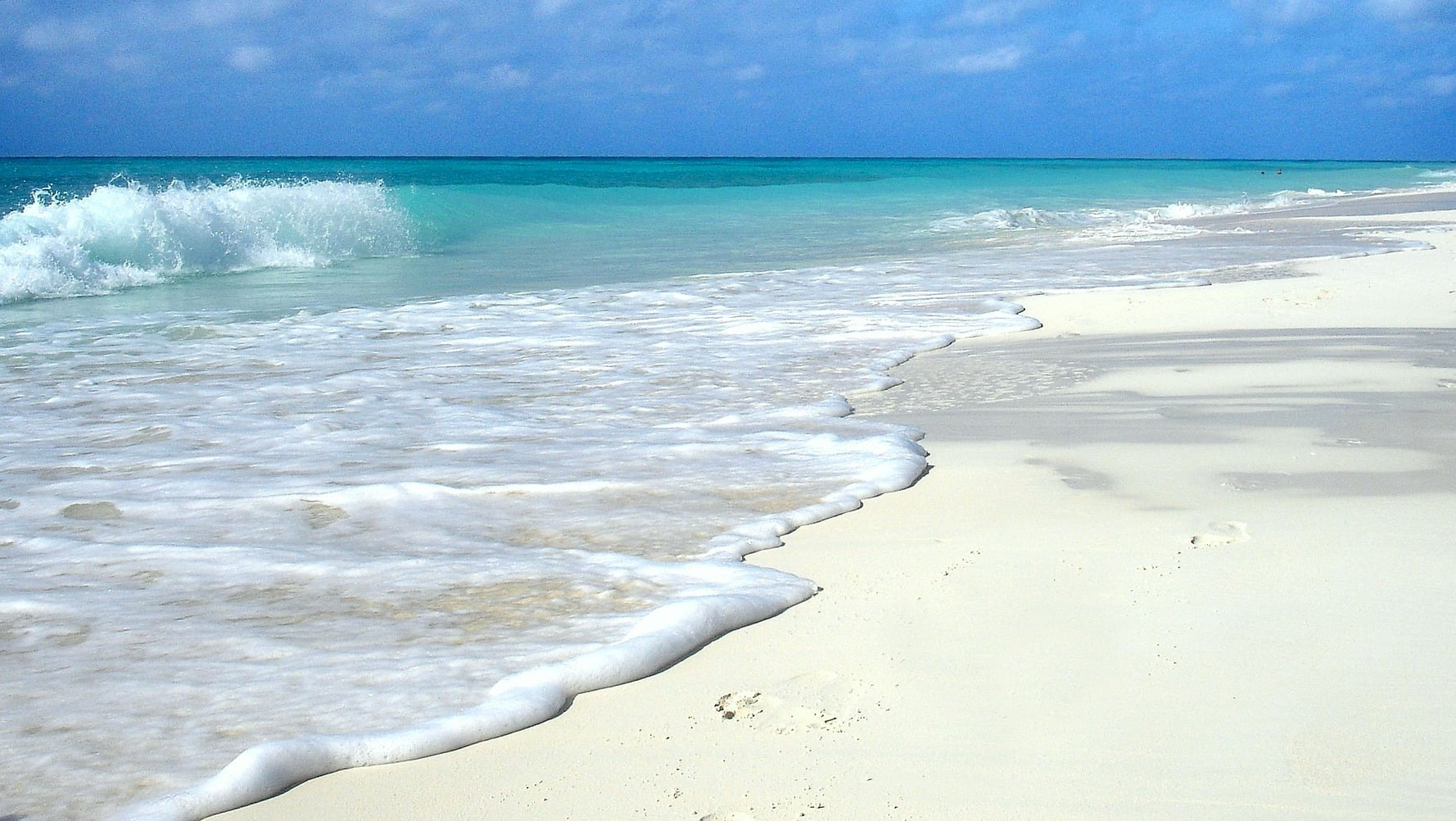