Cars in Cuba are deservedly regarded as true landmarks of the country.

Since the energy crises of the late 1980s, when the Soviet Union and eastern European countries stopped supplying Cuba with the petrol it needed, “every possible means of transport has been used to get around the island”. I read this in a guidebook and let me tell you – I was surprised at how true this was! So, here is some useful info about cars in Cuba. 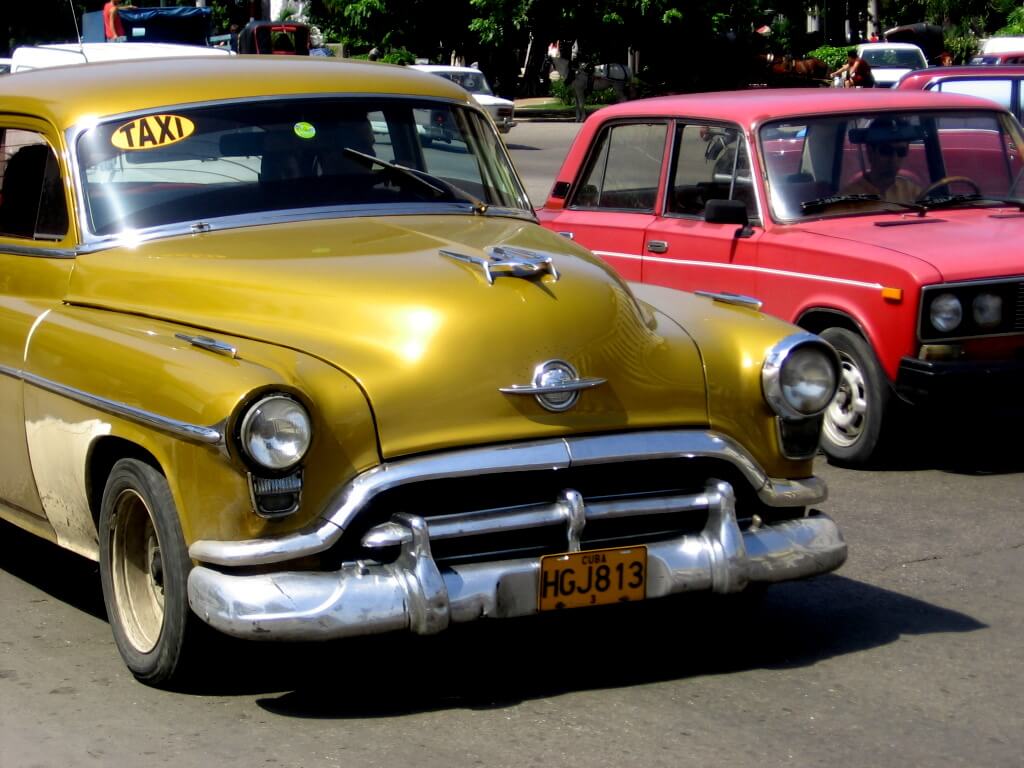 You can see vintage American cars and Soviet vehicles made in the 1970s alongside bicycles and one-horse carriages.

Getting from one place to another, from home to work, is not an easy task for Cubans. They usually don’t have a car, and if they do drive – it’s probably some old thing that you can only find improvised parts for in local workshops. (Cubans were not allowed to have any private property when I visited. I am not aware if that changed over the years.) 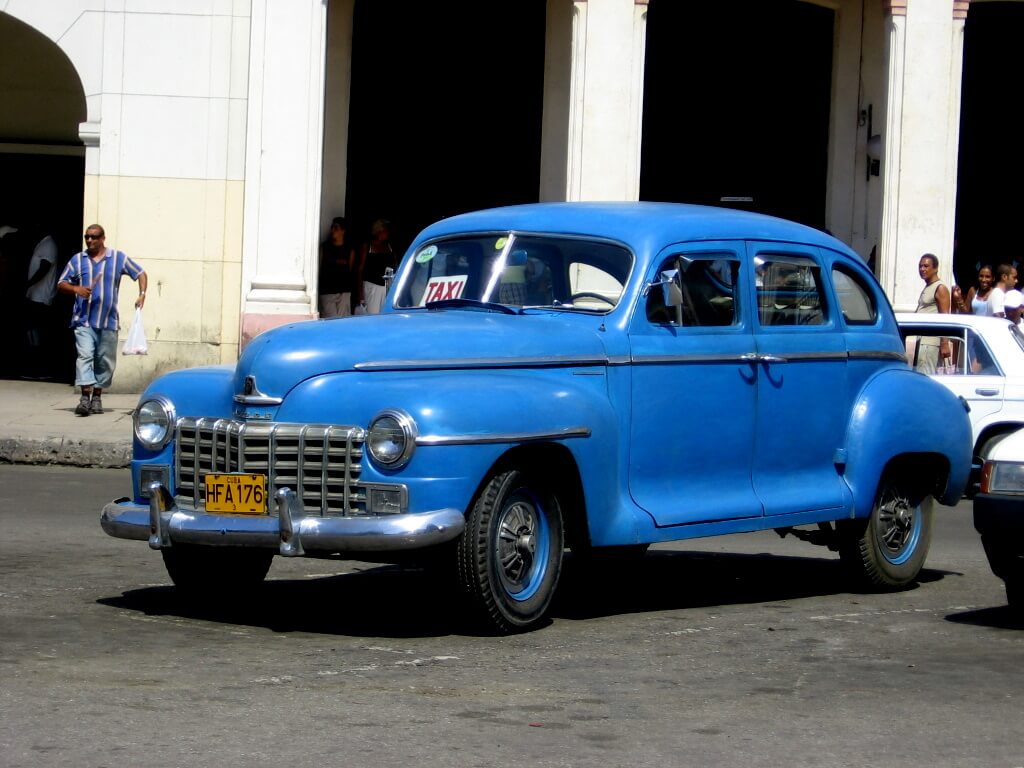 A beauty in blue

So, they can either go by bicycle, if the office is not that far, or hitchhike. Every time I took a bus from my Varadero hotel to go to Havana I was surprised that so many people who worked at surrounding hotels were just standing on the road, still in their uniforms. They were hitchhiking, waiting for some lorry to give them a lift. 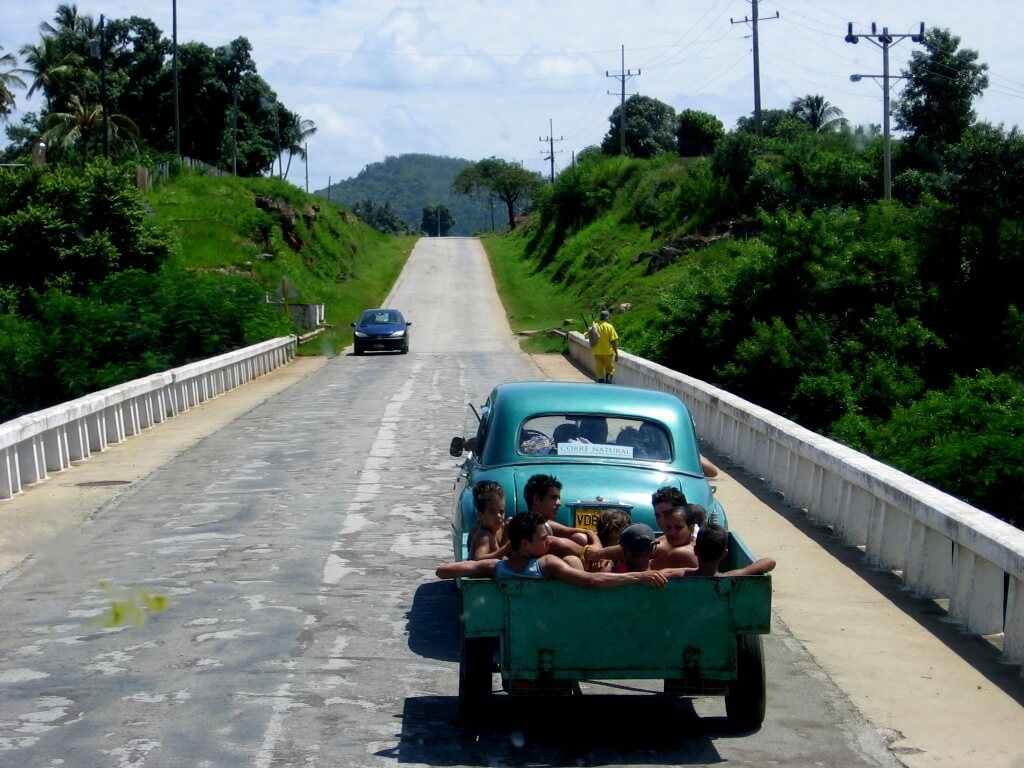 The bus I was on was obviously for tourists only and the Varadero peninsula is pretty long, far from the small settlement where they might have lived. There were some whose houses were in Matanzas town, 50 kilometers from the hotel area. 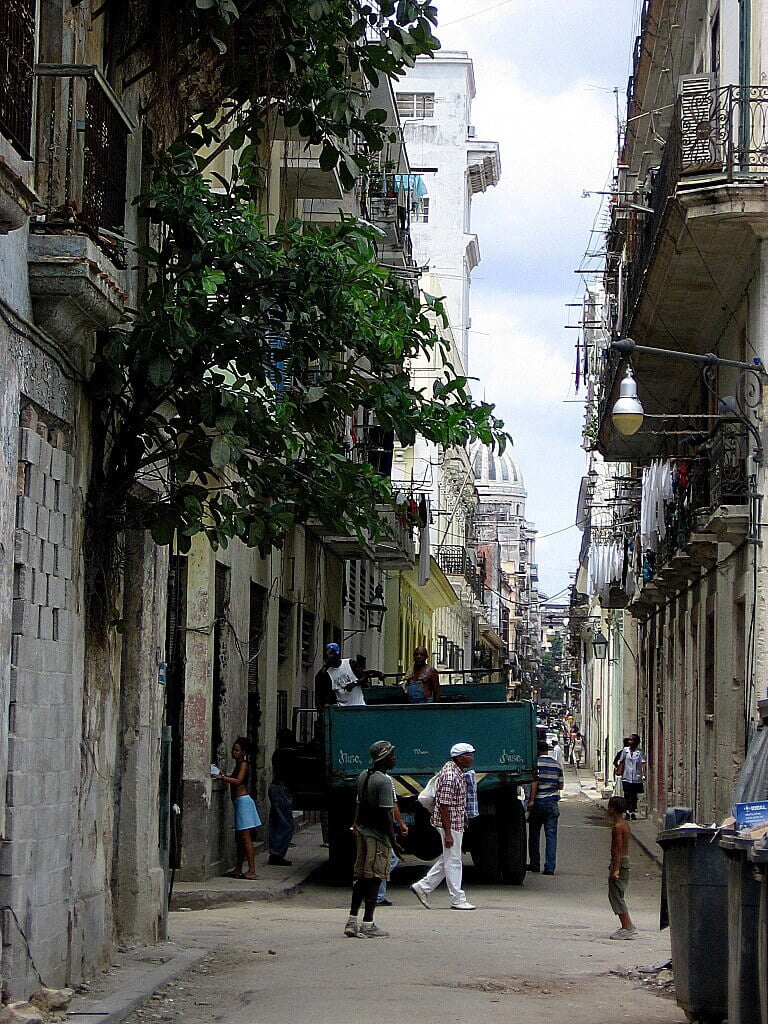 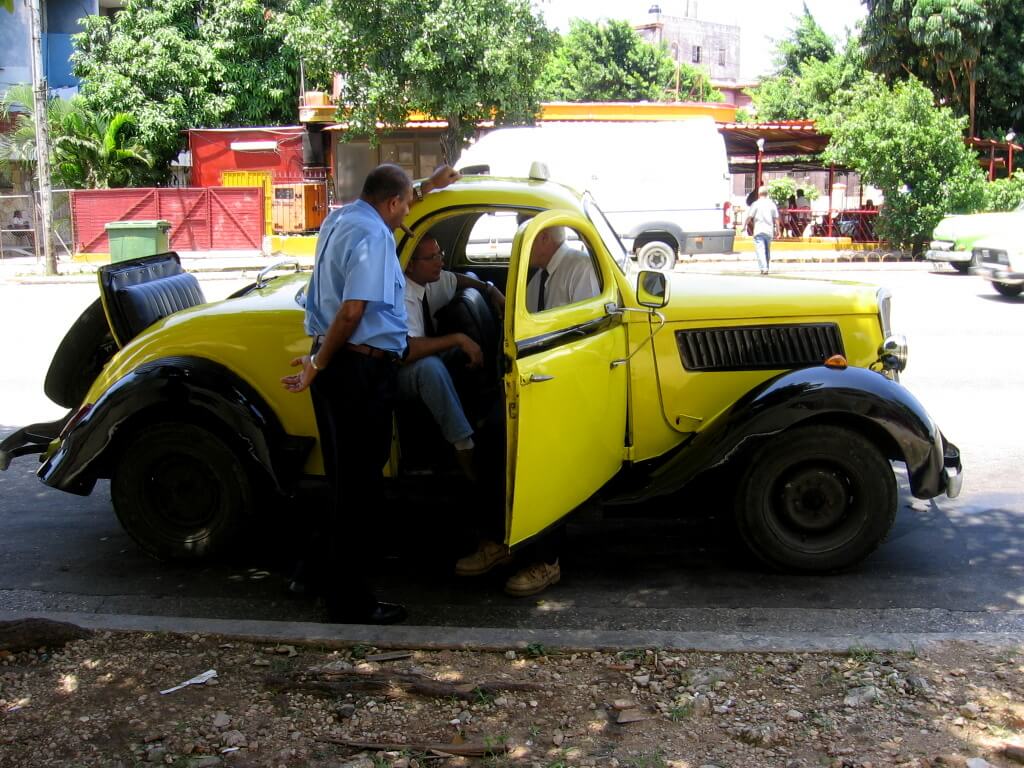 CARS IN CUBA: A taxi vehicle

And how about public transportation, you might ask. Well, I did see a few crowded buses that only a Cuban can manage. I mean, it seems you would have to possess some special skills to climb up, squeeze in, and then get off at the very station you choose. There were not enough buses when I visited, so those that I saw in Havana for instance were only covering the city. There were no intercity lines at all. 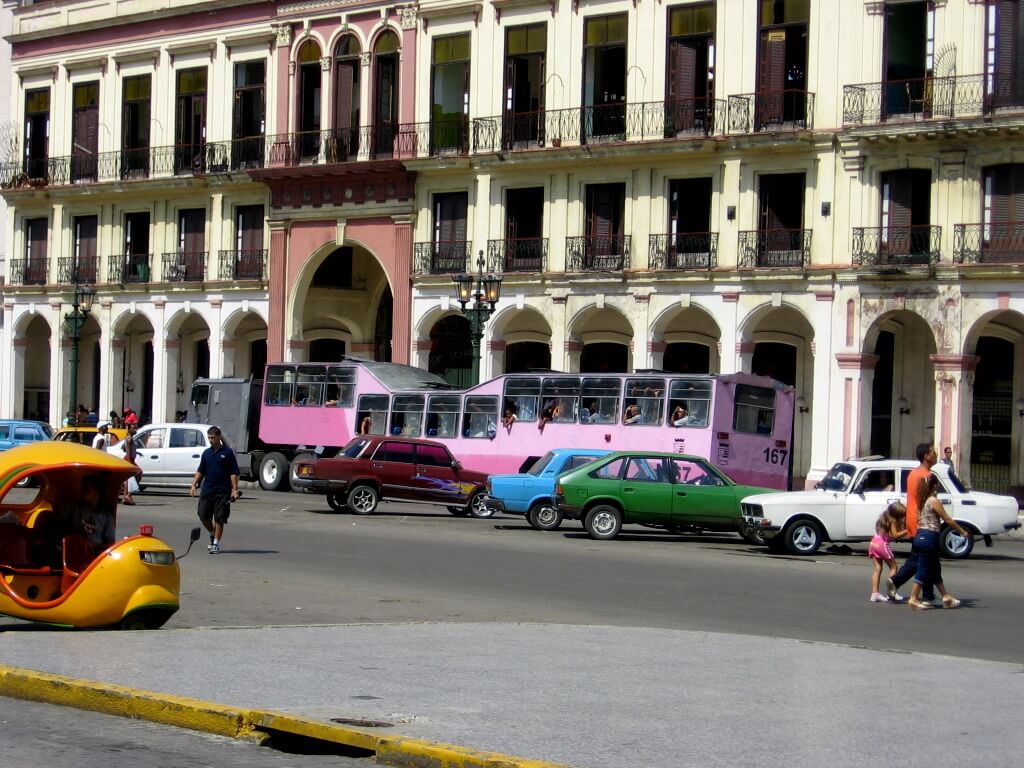 And that one in Havana? Well, you just have to admire Cuban resourcefulness.

There are not enough buses, so how do we make the ones we have – bigger? At least that was my first impression. You see a bus in Havana that looks like it was cut in two with an additional wagon put in between. It becomes long and heavy, so you add some bigger tires and a truck cabin to pull the construction. And there you go, you get – the pink city Havana bus or the camello (the camel) as locals call it. 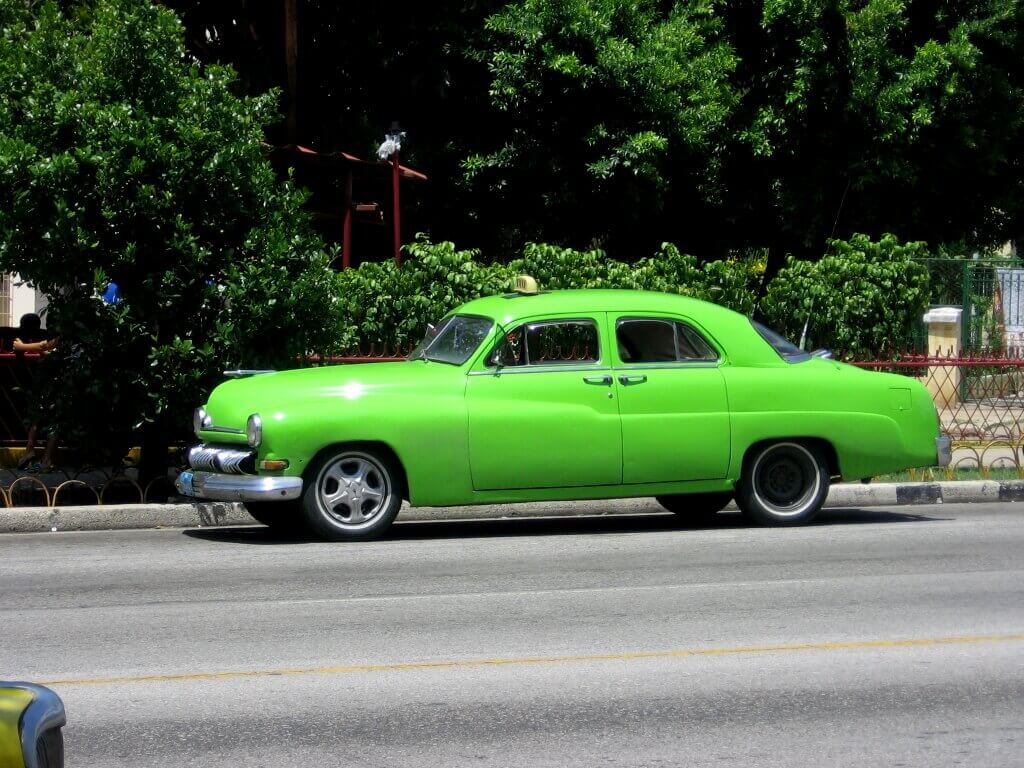 It’s easy to stumble upon traditional horse carriages in the countryside, while you can often see rickshaws in town areas. Both are not oil-dependent, hence the reason. I also saw carriages pulled by a horse with tires instead of wooden wheels. Or something that was once a van, but now it’s only its shell with front wheels as those for carriages with no tires and all.

You get confused by cars pulling a trailer full of people, but then again – you just stand in awe because of the ingenuity of the Cuban people. 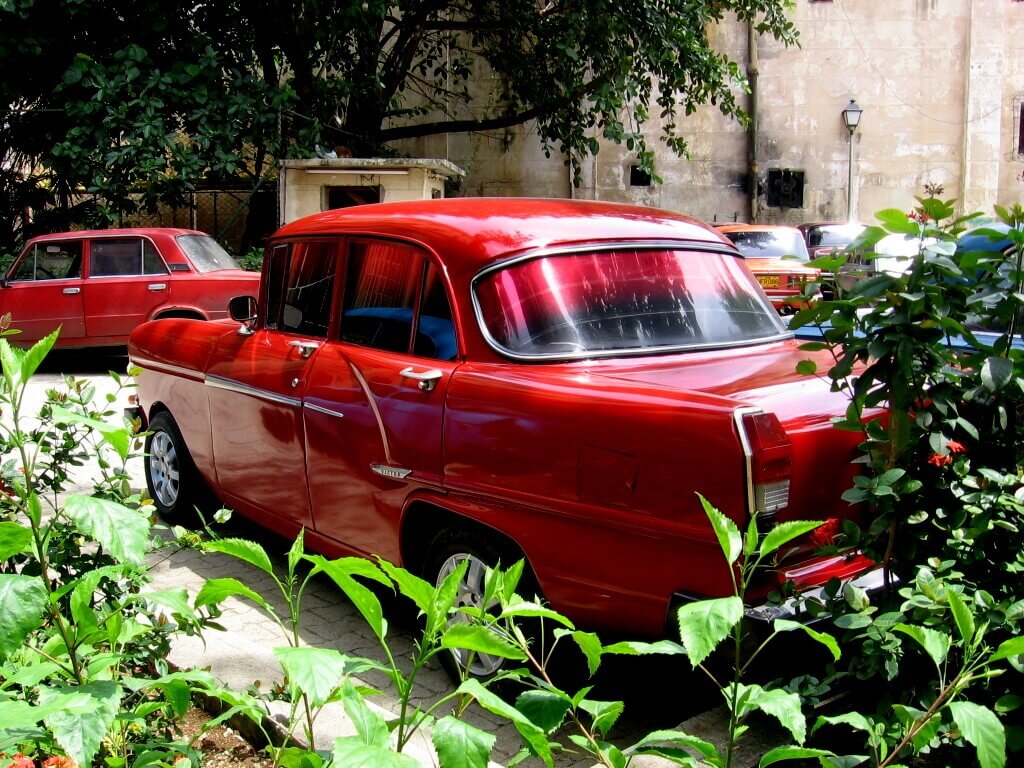 CARS IN CUBA: It doesn’t get shinier than this

There are motorbikes on the road or town streets, older models, but there are also – sidecars? Just imagine seeing sidecars so often in various colors, sparkling red or blue, all cleaned up, that you begin to wonder if you have woken up in an old movie. I was fortunate to have a ride in one in Cuba (I still remember my bruised knees). You can read about it in one of the previous Glimpses. It was a memorable journey. 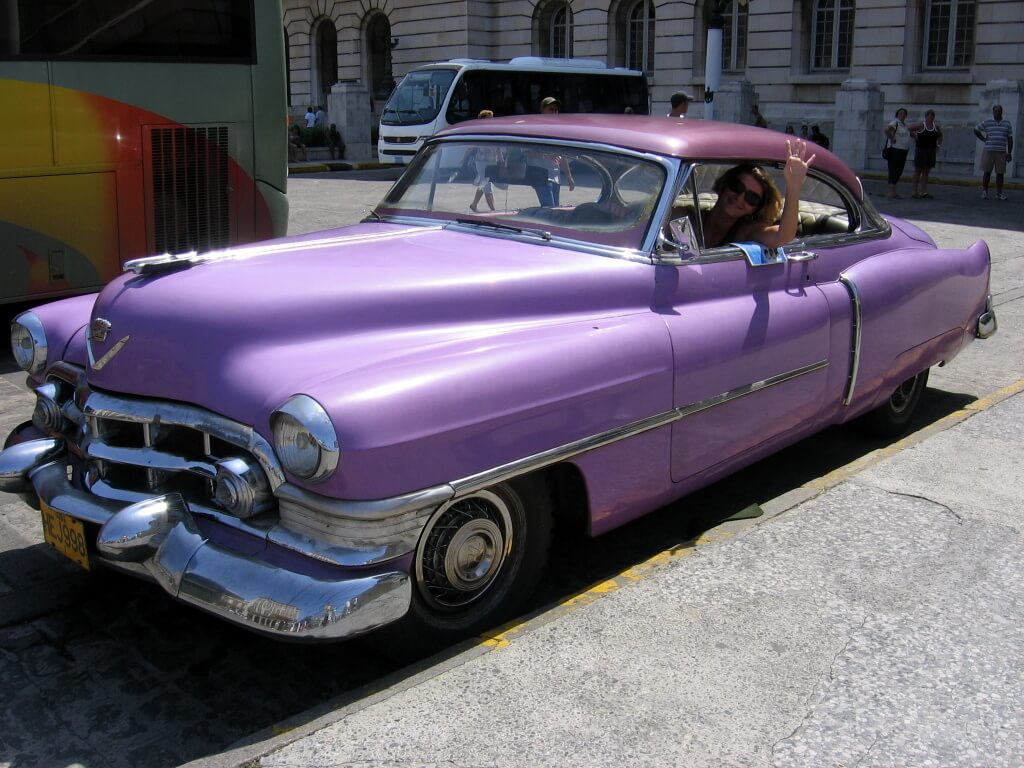 And now, the thing that makes Cuba easily recognized all over the world. Old cars in Cuba, vintage American cars. You can often see old Chevrolet models on the streets, but there are lovely Cadillac cars as well. I just had to get into the pink one, I didn’t care how “touristy” it was.

And one can say that Chevrolet cars are among the most popular since they are appreciated for their durability and passenger space – all the essential things here. It’s very easy to find one, they are often used as communal taxis. 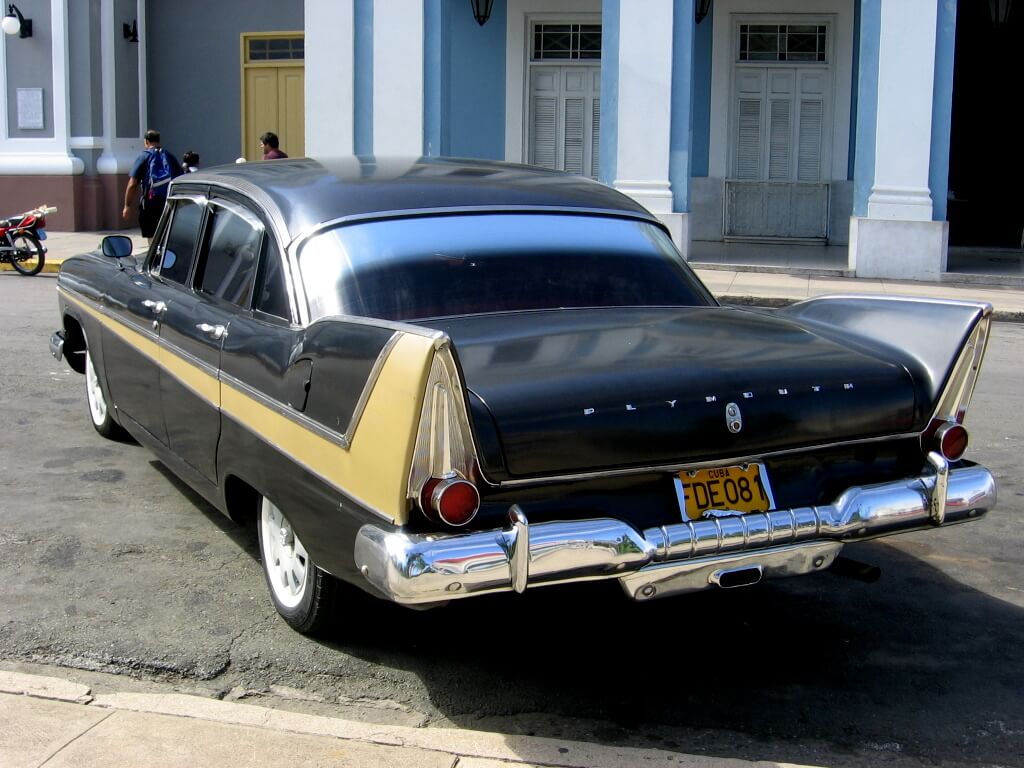 Isn’t this Chevrolet a beauty

As if this was not enough, you can also visit the Old Cars Museum in Havana with all sorts of vintage Ford models. Now it’s like stepping into another movie scene from the previous period – the black-and-white one. 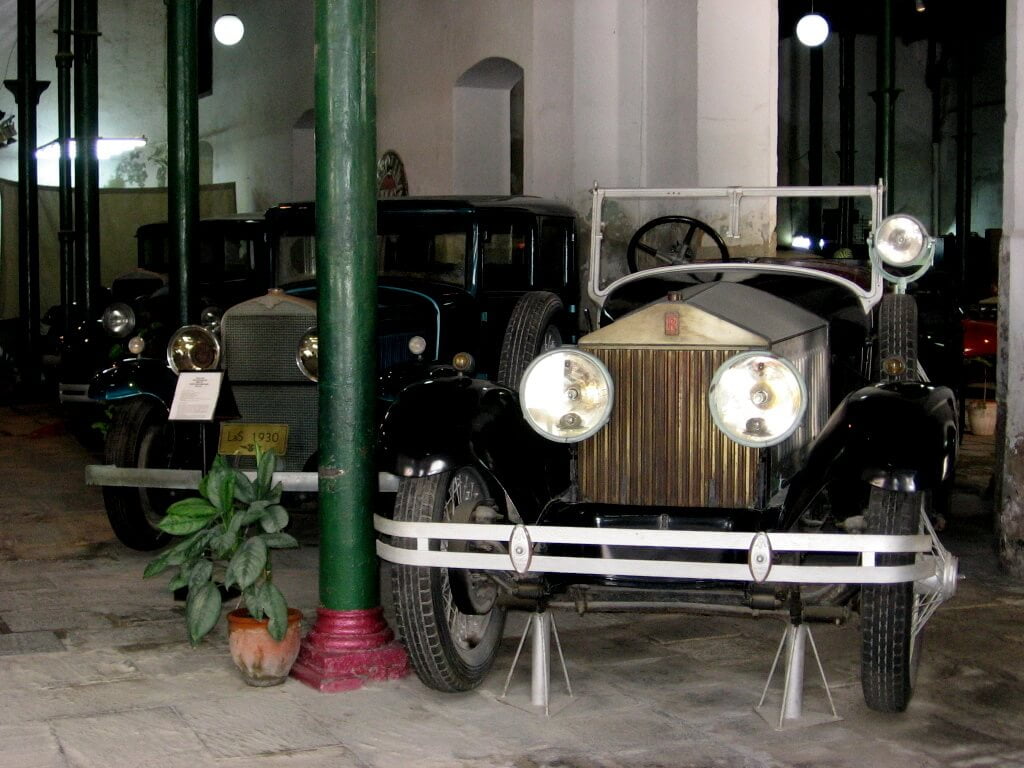 Nevertheless, you can get all sorts of taxis here, from sidecars to Cadillacs. There is one cute little thing, all yellow and round. It’s cold a cocotaxi. It’s an egg-shaped scooter that can carry two passengers and can be very useful for short rides around the city. 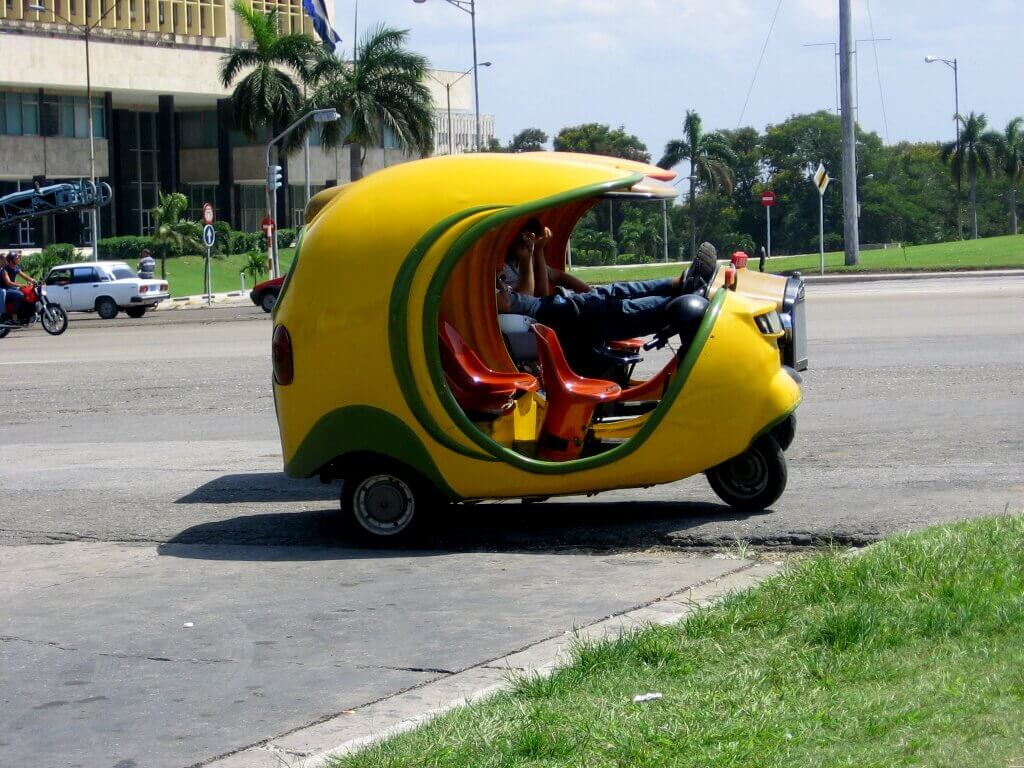 As a tourist, you will have a lot of fun with all of these means of transportation. Cuba is really an open-air museum where you can witness an old movie-like scene and stand there in awe as another old-timer, brightly pink, just passes you by.

Next: A TRIP BACK IN TIME, TRINIDAD, CIENFUEGOS, SANTA CLARA 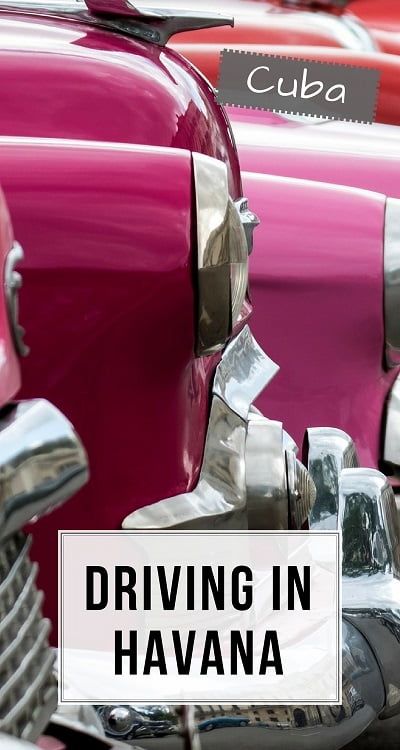 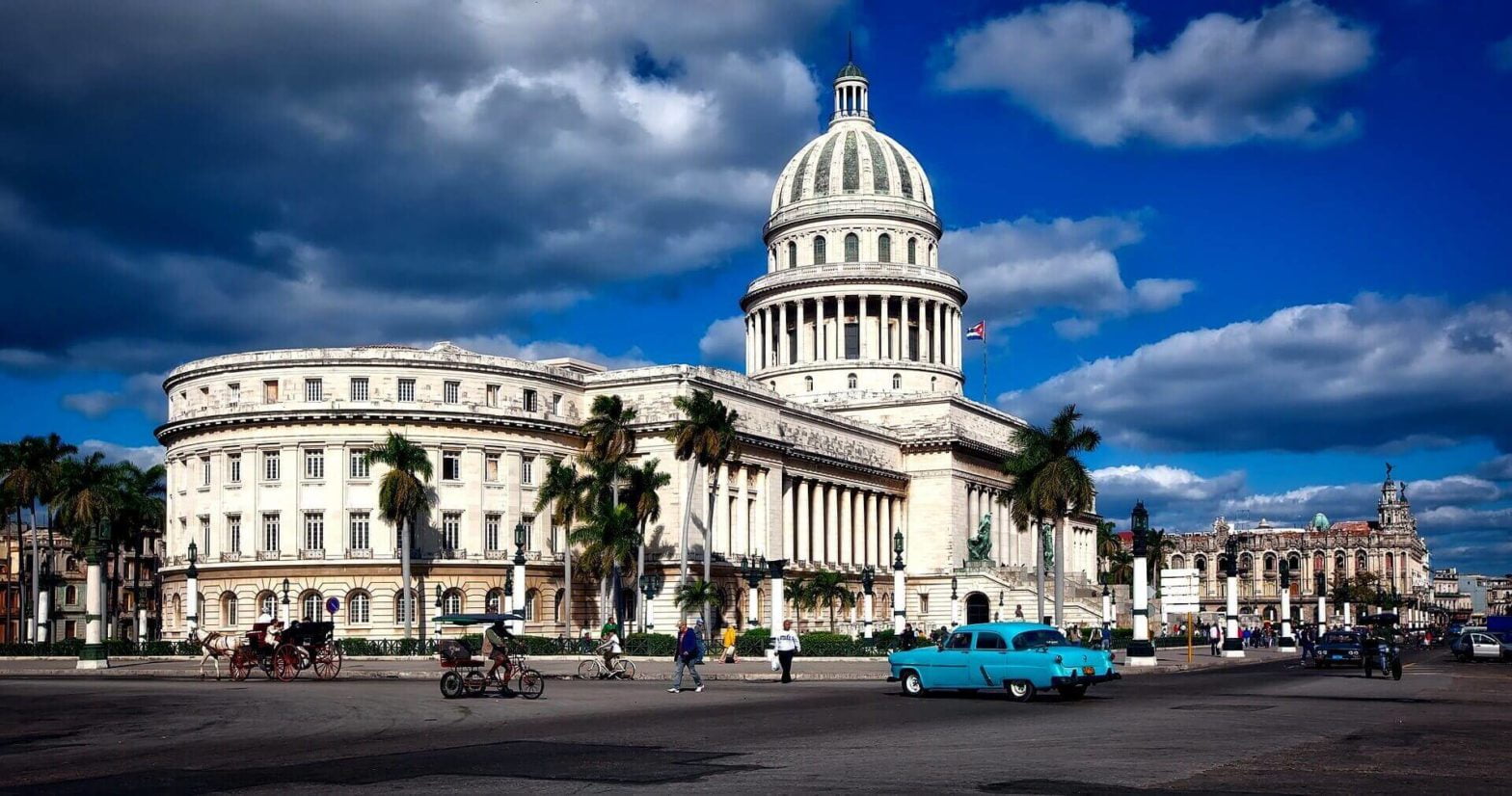 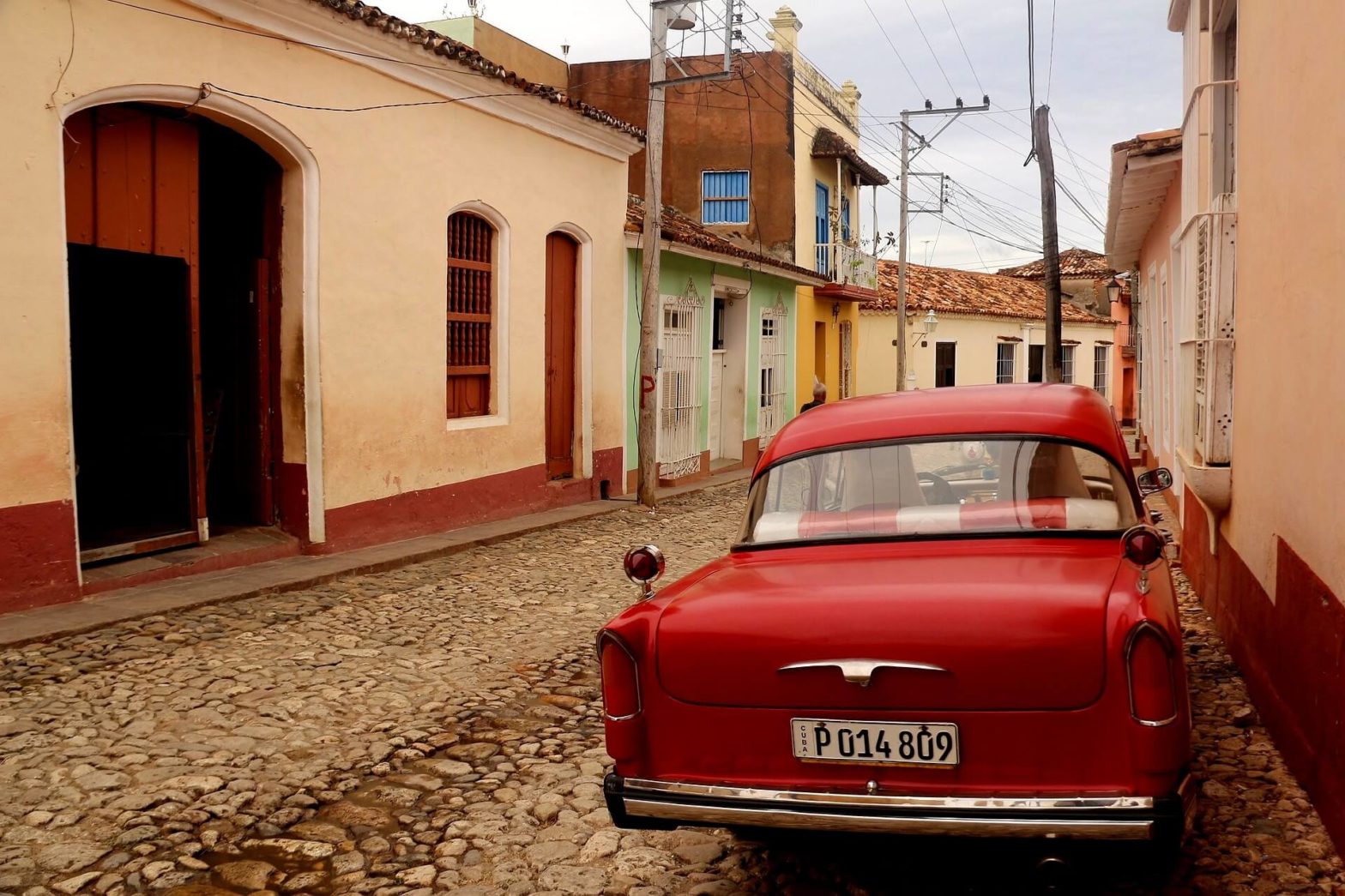