If you go north from Amman, as I did, you will get to Jerash ruins which are not to be missed when you travel to Jordan. This is one of the most important historical places in Jordan, one of the most significant Roman cities in the region that is well preserved to this day. So, prepare yourself for the incredible city of Jerash. 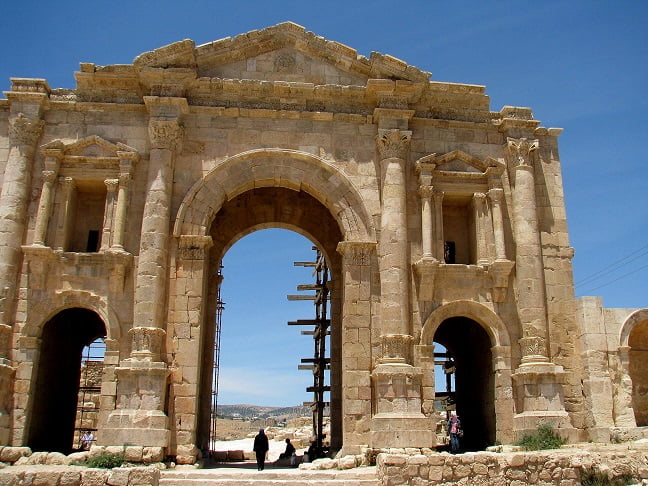 Hadrian Arch or the South Gate

The formal town plan first laid down around 70 AD reflected the typical Roman scheme of a main colonnaded street intersected by smaller side streets. When Emperor Trajan occupied all of Jordan in 106 AD, Jerash (or Gerasa) fell under the jurisdiction of the new Roman province of Arabia. As local investments in agriculture, industry and services boosted regional and international trade, Jerash and the whole country, enjoyed the golden age for over 200 years.

One can sense Gerasa’s prosperity even before reaching the modern entrance and the South Gate. 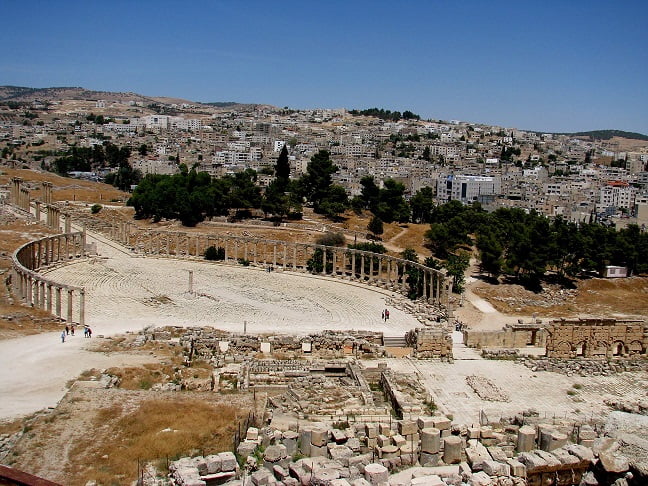 The first monument one encounters on the road from Amman is the triple-gated Hadrian Arch, standing about 450 meters south of the city walls and built to commemorate Emperor Hadrian’s visit to Gerasa in 129 AD… I read this in the guidebook I bought in Amman, but let me tell you – you will get overwhelmed by the first glimpse of the city once you get here. 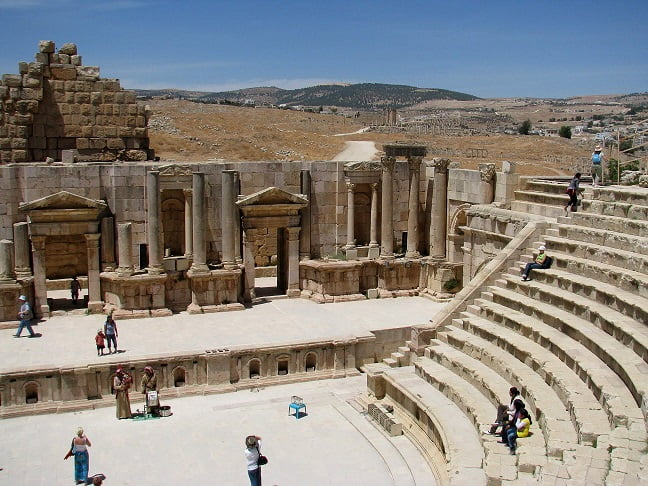 The Arch stands next to the massive Hippodrome where the south part is restored still housing some of the Roman games for tourism purposes. The Hippodrome was built between the 1st and the 3rd century AD, and it could have accommodated up to 5,000 spectators. 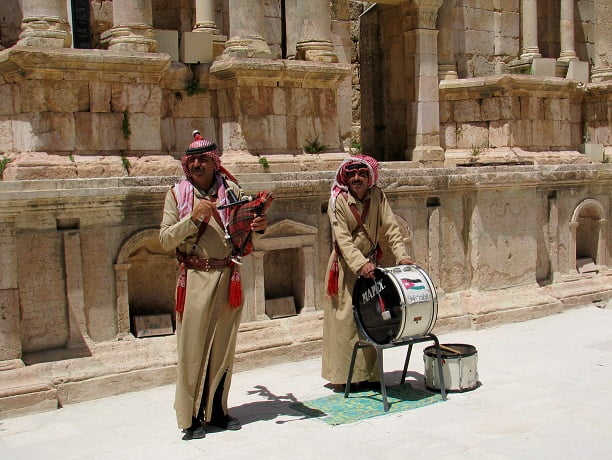 Entertainers at the Theater

The South Gate leads visitors into the spacious Oval Plaza with its long arcade of Ionic columns. Overlooking the plaza from the west is the 1st-century Temple of Jupiter whose Hellenistic predecessor was uncovered in its lower courtyard. When you get to the temple, you will have a great view of the whole Oval Plaza. West of the temple is the large South Theater, finished in the early 2nd century AD. 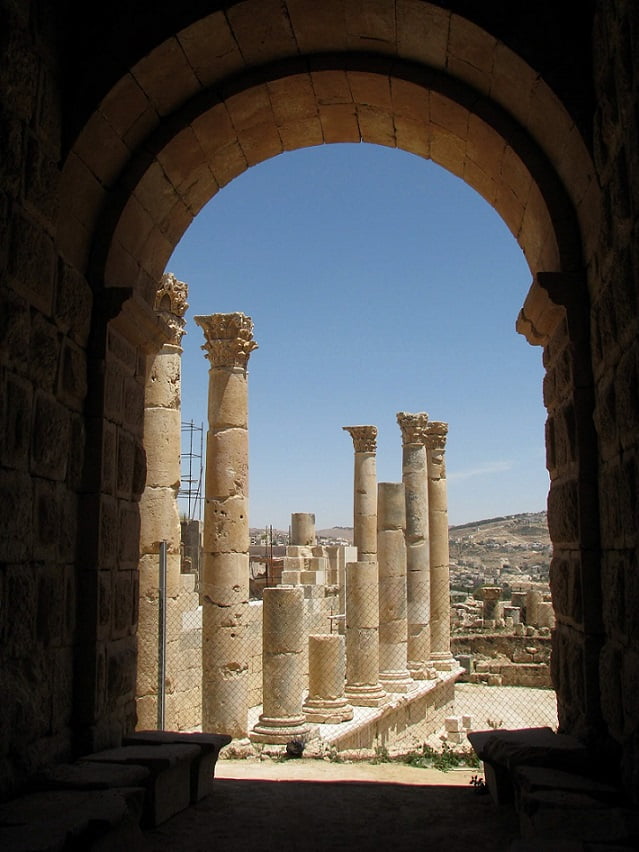 The Oval Plaza leads into the 800-meter-long Cardo, the main street and the urban spine of ancient Gerasa. In the 2nd century AD, the original Cardo was widened and its original Ionic columns were replaced by the more elaborate Corinthian style. You can still see the 56 imposing columns. 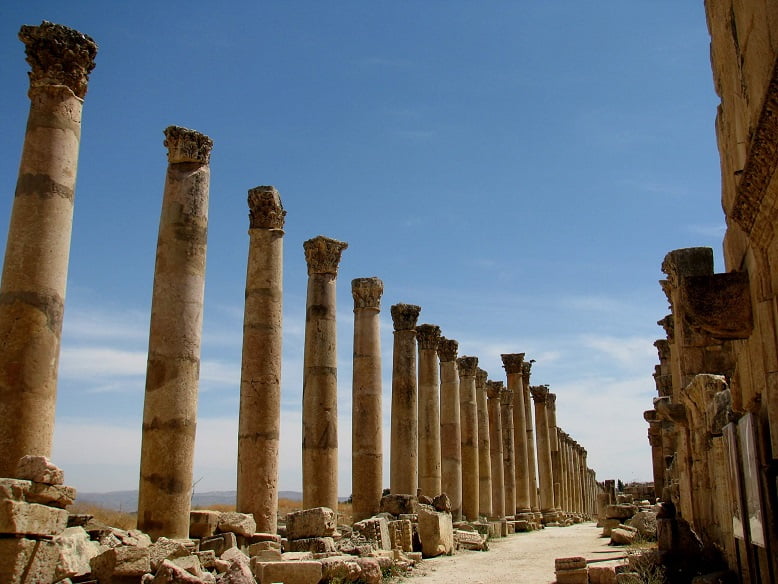 Cardo Maximus with the 500 remaining columns

The Jerash ruins are even more spectacular thanks to the broad paved street, the main artery of the city, called the Cardo Maximus. It was once flanked by porticoes of which over 500 columns still exist. You can almost imagine heavy carriages riding by, and hearing the conversation of people passing by, or haggling and buying goods. 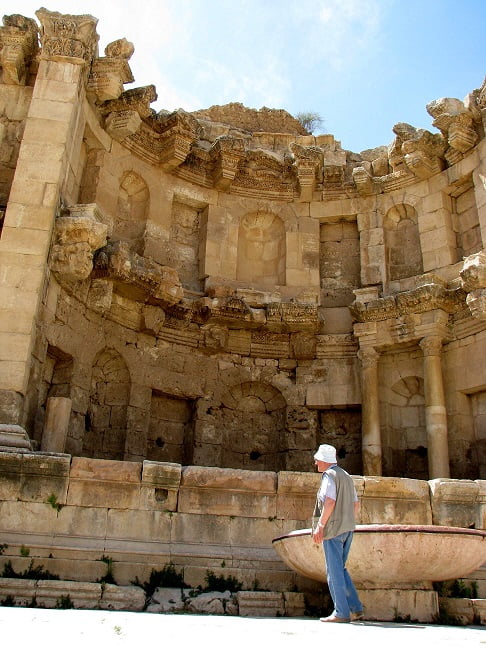 The city’s most important structures, arranged around the first Cardo I have mentioned, also included markets, temples, and fountains. Walking up the street today from south to north, you will pass a string of public monuments, some of which retain the crisply carved stonework of the 2nd century AD, such as the Agora, the Forum (where official business was transacted), the richly carved entrance to a Roman temple which was transformed into a church, the Nymphaeum or ornate public fountain, the Temple of Artemis who was the patron goddess of the city (the remaining columns are stunning!), the wide West Baths, the North Colonnaded street leading to the North Gate, etc. 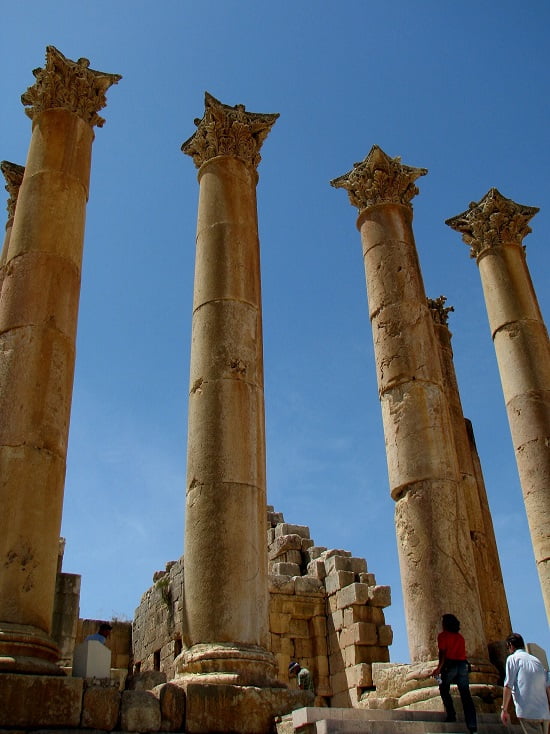 JERASH RUINS: Columns of the Temple of Artemis

In the Byzantine era, some of Gerasa’s Roman temples were transformed into Christian churches, while new churches were built from cut stones and columns taken from Roman-era buildings that had collapsed from frequent earthquakes in antiquity. We now know of at least 15 churches in Byzantine Gerasa.

The complex of three churches dedicated to Saint George, Saint John, and saints Cosmas and Damian, west of the Artemis Temple, has the city’s best-preserved mosaics from the 6th century AD, including representations of animals and the church benefactors and bishops. 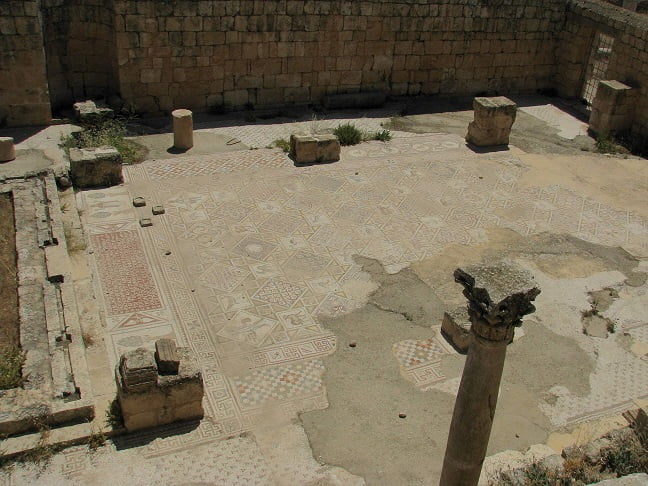 Although I already mentioned a few Jordanian dishes you should try while visiting the country, I have to say that I will also remember Jerash ruins because of the Arabic pita bread I tried in the nearby restaurant. It was extremely tasty, crunchy, and sprinkled with seeds. If going around the ancient Gerasa in the sun got you hungry, don’t worry, the refreshment and delicious food are not very far. 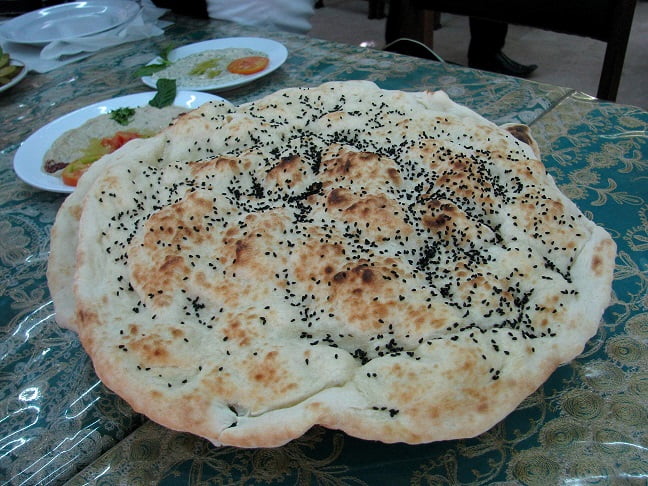 And then, in less than an hour’s ride from Jerash ruins, you will reach the border with Syria. It will take you the same time to get to the capital Amman from here. As for my travelogue, I think it’s time to head south, to the shores of the Red Sea. 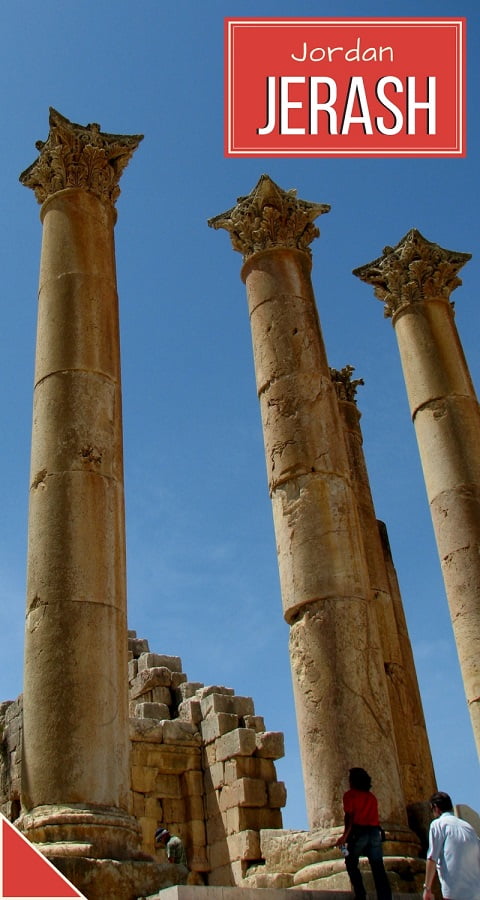 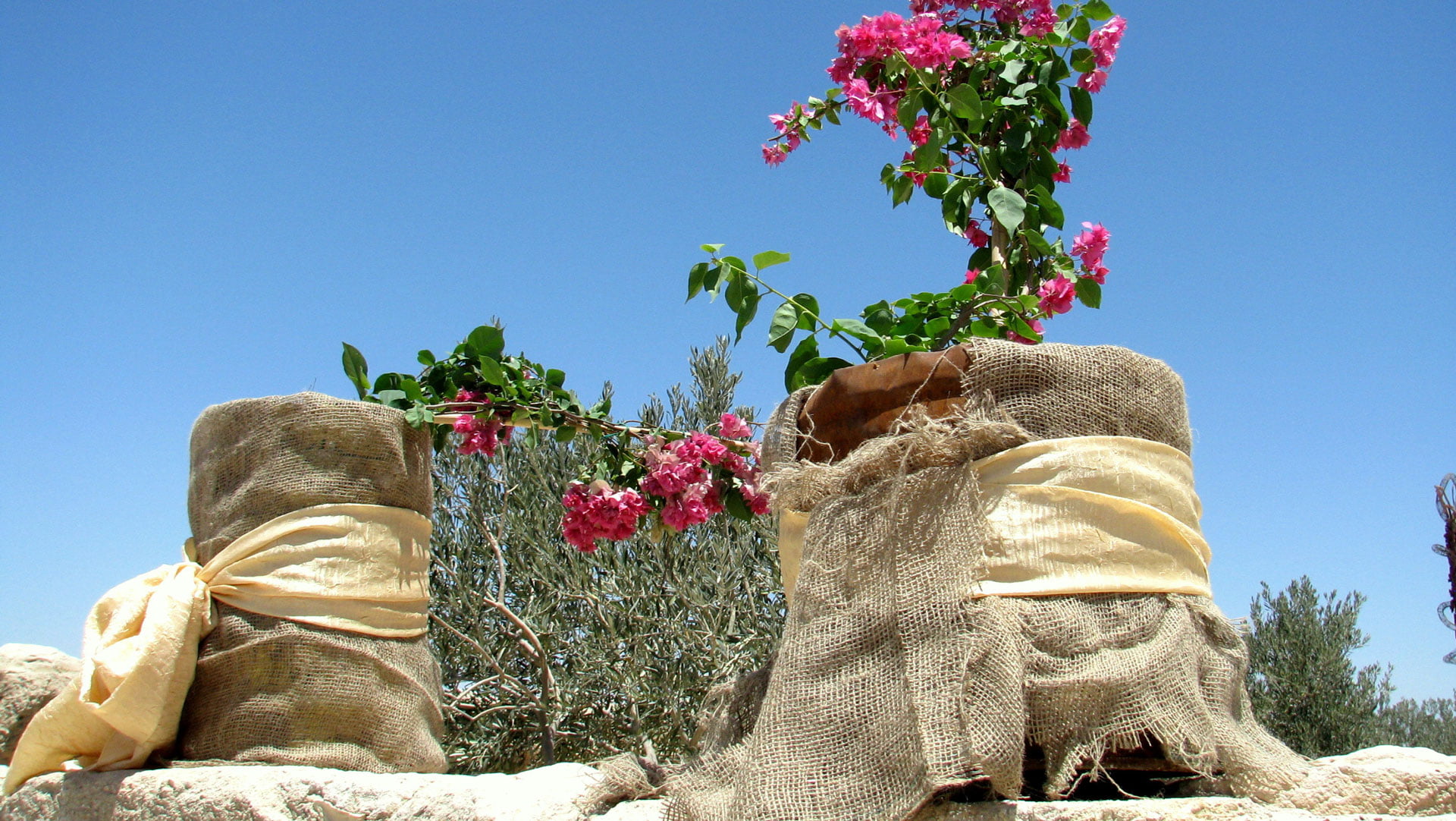 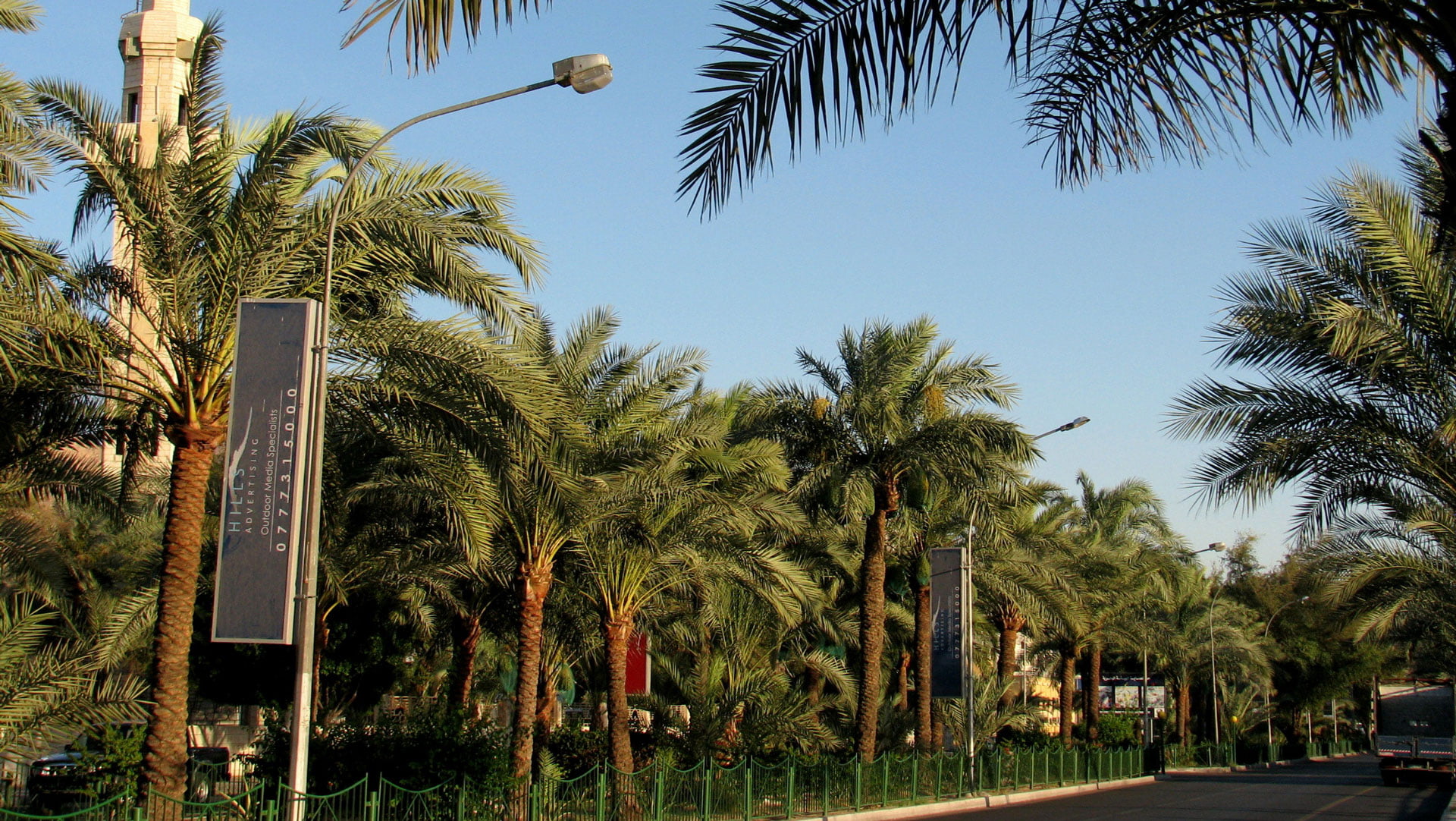