Here is the post named “Bali Things to do”, dedicated to its beautiful temples that I loved visiting.

Even though the island is part of the (mostly Muslim) country of Indonesia, it has a strong Hindu tradition, and therefore the temples in Bali are extremely important. More than 85 percent of the 4,2 million island inhabitants practice Balinese Hinduism. Hence there are so many Hindu temples – about 10,000, dedicated to different deities from the land and the sea. Bali is actually nicknamed the Island of Gods! 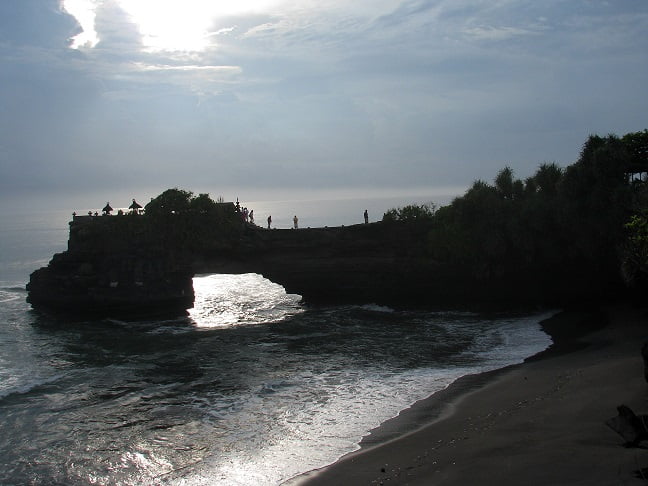 To the Balinese, every living thing – from a weed to a human being – has a spirit, and therefore there is an array of spirits all around you. They believe that there are both good and evil spirits and that this eternal duality exists in balance. The balance is reflected at the point where the lines meet in the ancient religious symbol of the swastika. I was fascinated by the whole philosophy of the tradition. 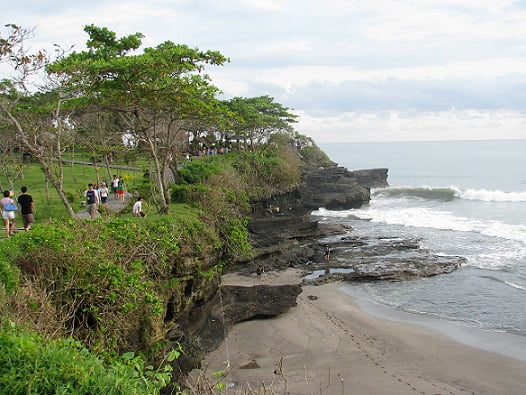 BALI Things to do: Walk along the seafront nearby Tanah Lot

Each year people hold countless ceremonies to please good spirits and appease the evil ones. It wouldn’t be hard to stumble upon a ceremony while going around the island’s temples. And this is a magnificent sight to witness, believe me. 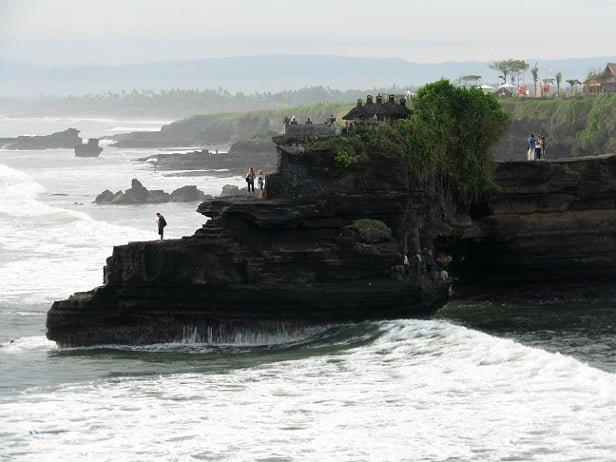 Strong waves below the Batu Bolong

Anyway, when I read about this Balinese tradition, I was actually convinced that the island is undeservedly referred to as just a place with perfect beaches. Have a peek into the previous post about the 1,000-years-old Mother Temple and keep reading through this one. Here are the temples, besides the Besakih, not to be missed when you travel to Bali, an obligatory stop in your “Bali Things to do” itinerary. You will be stunned by the whole scenery! 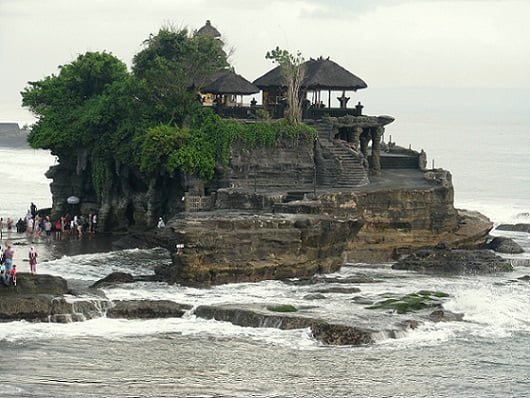 This is probably one of the most visited temples on the island. Anyone who was looking for Bali photos online has certainly stumbled across the Tanah Lot. And let me tell you, it deserves the reputation. It doesn’t matter if it’s crowded or not, just try not to miss it! 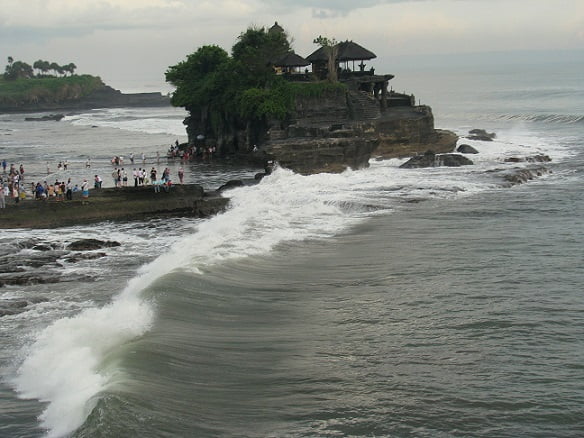 Located about 20 kilometers northwest of Kuta, this is one of Bali’s most important landmarks (and one of the most significant Bali things to do). The temple is situated on top of a huge rock that is constantly washed by crashing waves. You can only visit during the low tide. 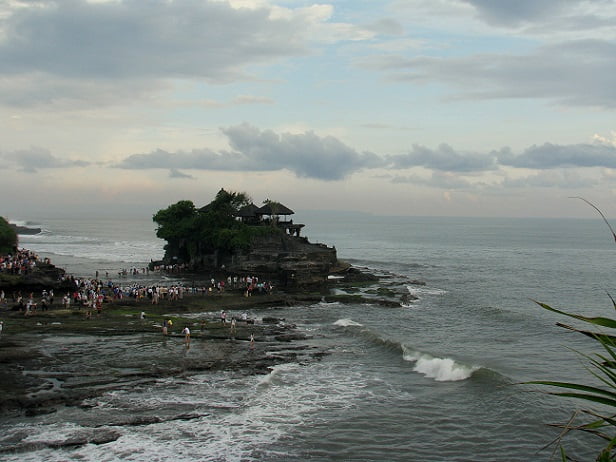 When approaching the coastal area, you will go by numerous small shrines, but nothing can prepare you for the scenery you are going to encounter when you come out to the bay. The temple lies on the left, but the low tide also reveals a huge rock that curves on the right, forming something that seems like a naturally crafted bridge, a crossing with a hole in it. It goes to the Batu Bolong temple. (They say that Batu means “the rock” and Bolong “the hole”.) 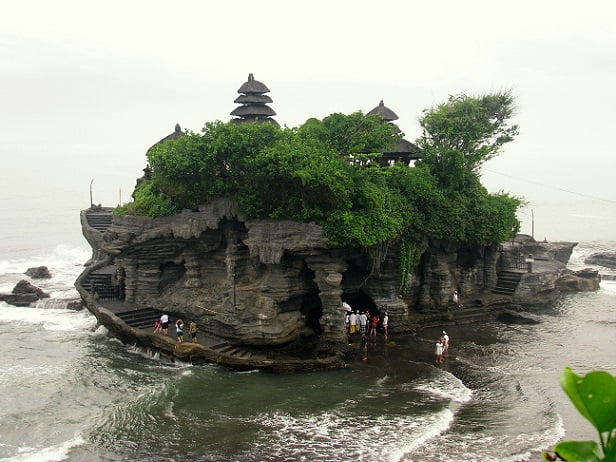 Mesmerizing structure of the temple

The story behind the temple is as mesmerizing as the structure itself, just listen.

A high priest from the Majapahit Kingdom in East Java who traveled to Bali in 1489 to spread Hinduism, came here. He has opened a site to honor the sea god Baruna. Since he was opposed by the neighboring village chief trying to dispel him, the priest shifted a large rock he meditated upon out to sea and transformed his sashes into snakes to guard at its base. The name Tengah Lod, the temple was originally called, means “in the sea”. That is when people acknowledged the priest’s power. 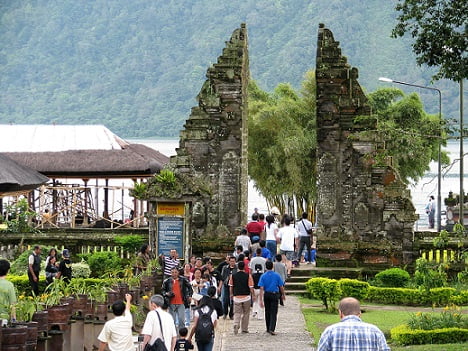 One of the gates towards the Ulun Danu Beratan

At low tide, it’s possible to cross to the rock which is believed to be the source of holy water. There was a line in front of the cave embedded into the rock. I didn’t know whether to stand there or not, but I was encouraged to wait a minute or two since there was a priest at the fountain who was giving blessings to visitors. 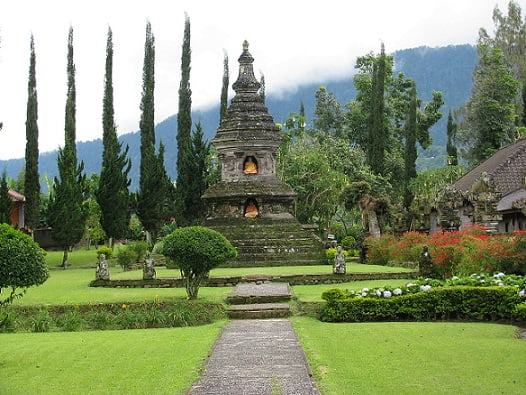 BALI Things to do: Stroll around beautiful gardens

I was so pleased afterward that I waited a bit and was sprinkled with the holy water. I have even tried it, it was really fresh. Also, being blessed meant that I got a rice spot on my forehead, similar to the Indian bindi forehead mark. The whole experience gives you goosebumps, you just feel that something special is going on here. 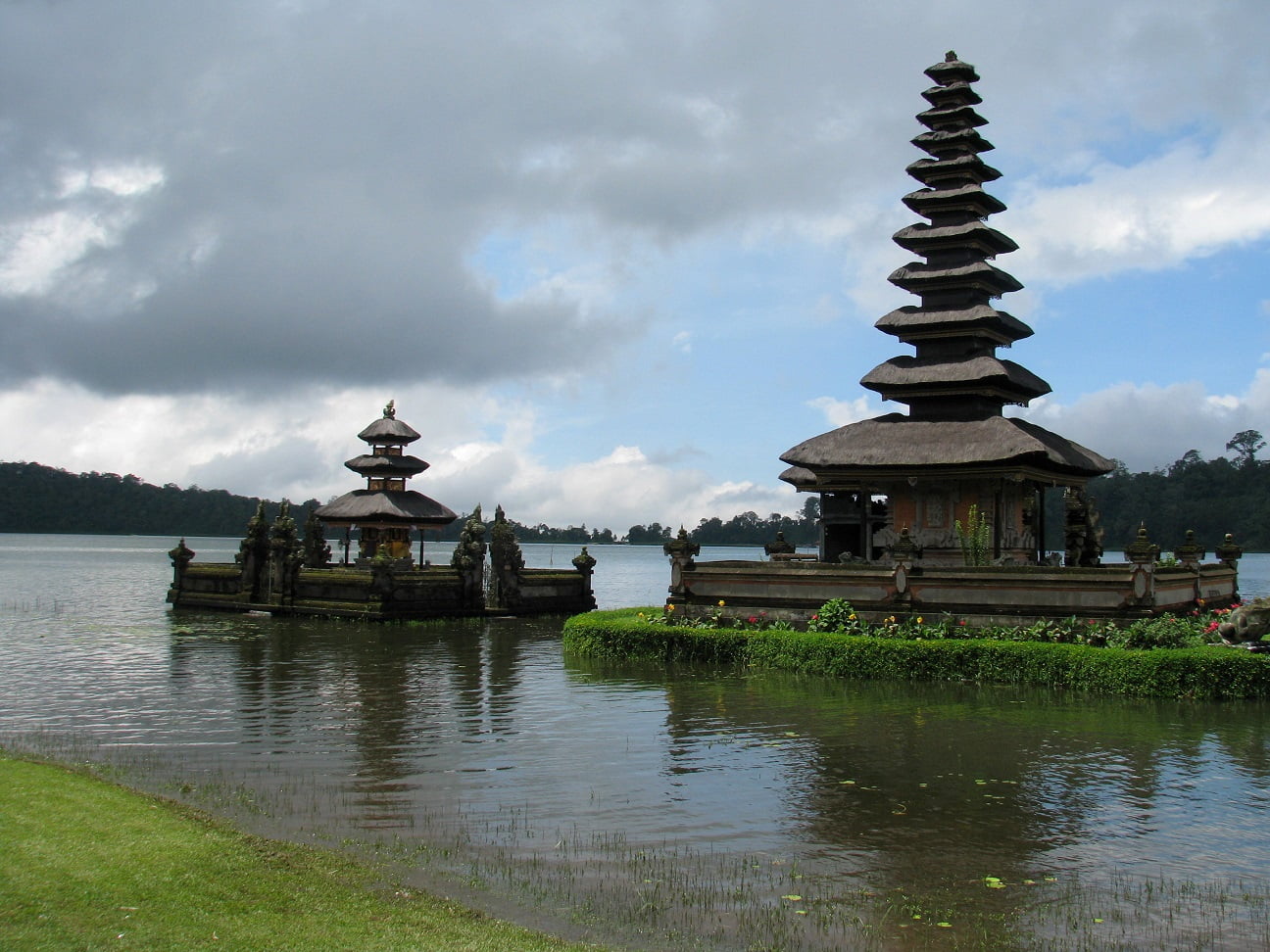 When you take the tour through the central part of the island, make sure to stop by the Beratan Lake in Bedugul. Why? Well, remember those photos of the small temple in the middle of a vast water area? This is Ulun Danu Beratan, located in the lake. Being in the upland, it’s not that hot here, so locals love to come during weekends to cool down. 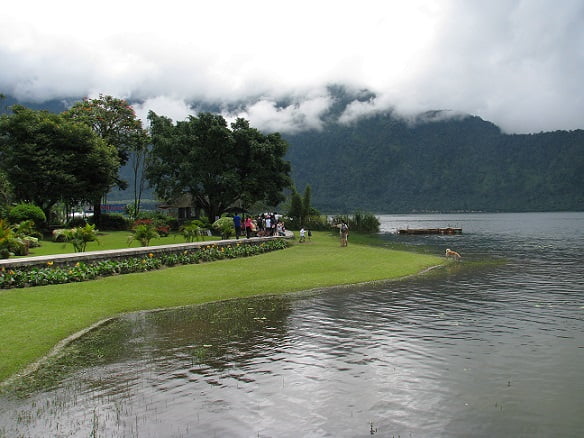 The fascinating landscape around the temple

After you go among religious structures and shrines and you finally come out to the lake’s shore, you will be amazed by the site. The temple really seems like floating on the surface of the lake! Add the high mountain peaks of the Bedugul region to the scenery and you will get one breathtaking landscape. A must-see on the “Bali Things to do” list. 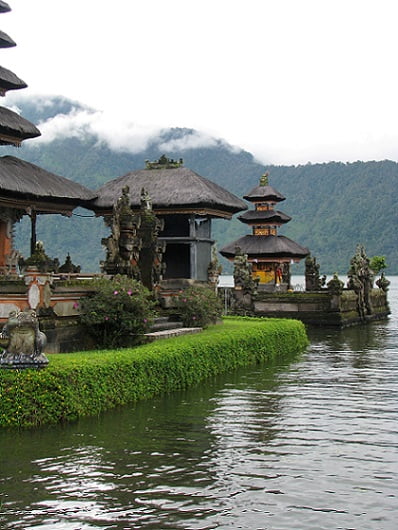 Such serenity and harmony in design

The temple was built in the 17th century and it is dedicated to the Hindu trinity, Brahma-Vishnu-Shiva, as well as the lake goddess Dewi Danu. The floating temple is comprised of four groups of shrines and there are four gates facing them. When coming into the complex, you will immediately notice typical Balinese architecture. All those shrines are built among such lavish greenery. I was astonished by the nature, flowers I have never seen before. I should mention that there is also the Botanic Garden that flora admirers shouldn’t miss – another “BALI Things to do” item. 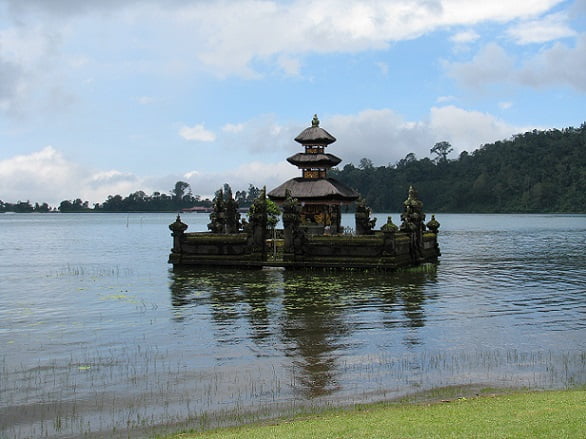 BALI Things to do: See the ‘floating’ temple

As for me, I was walking around in awe. We even stumbled upon a wedding. This sure was beautiful scenery to have a photoshoot in. 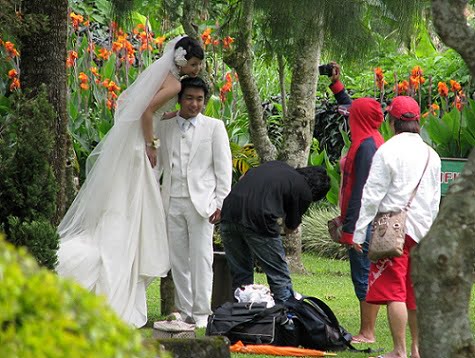 Other than the Besakih Temple and these two I have covered here, there is another temple extremely popular that should be on your “Bali Things to do” list. It lies on top of a steep cliff in South Kuta. Why didn’t I mention it in this post?

Because I went there to see the traditional Balinese dance! 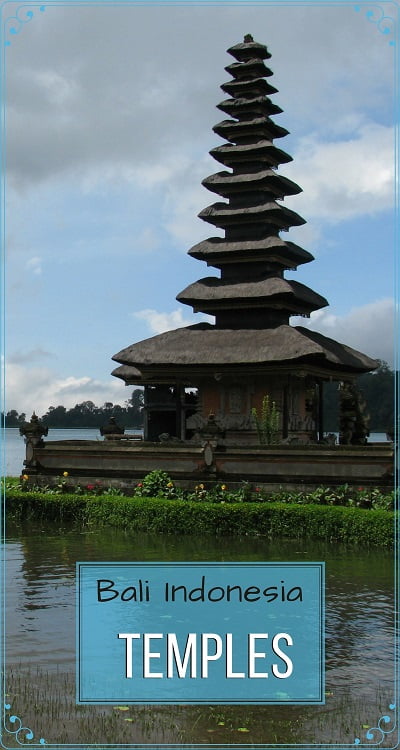 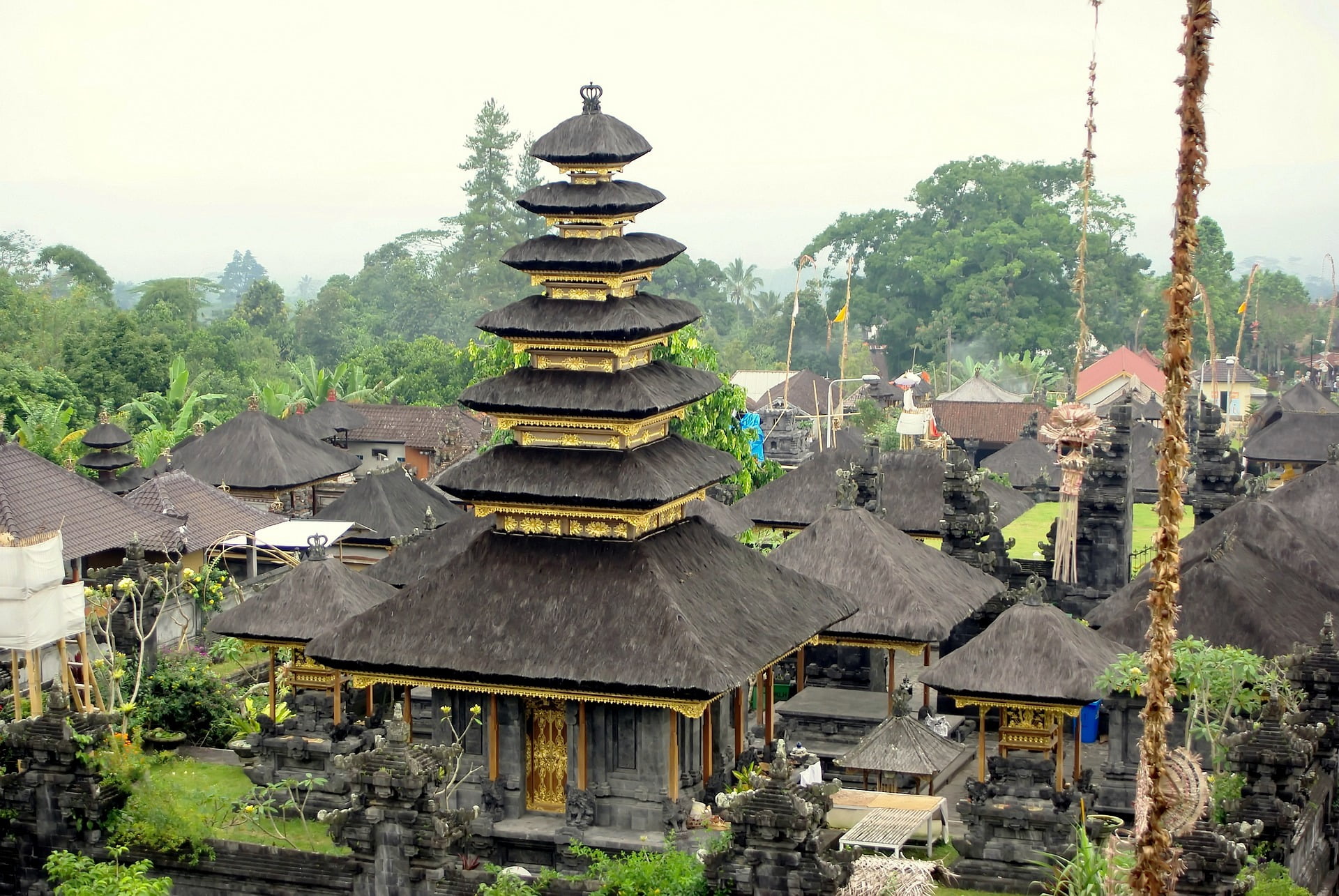 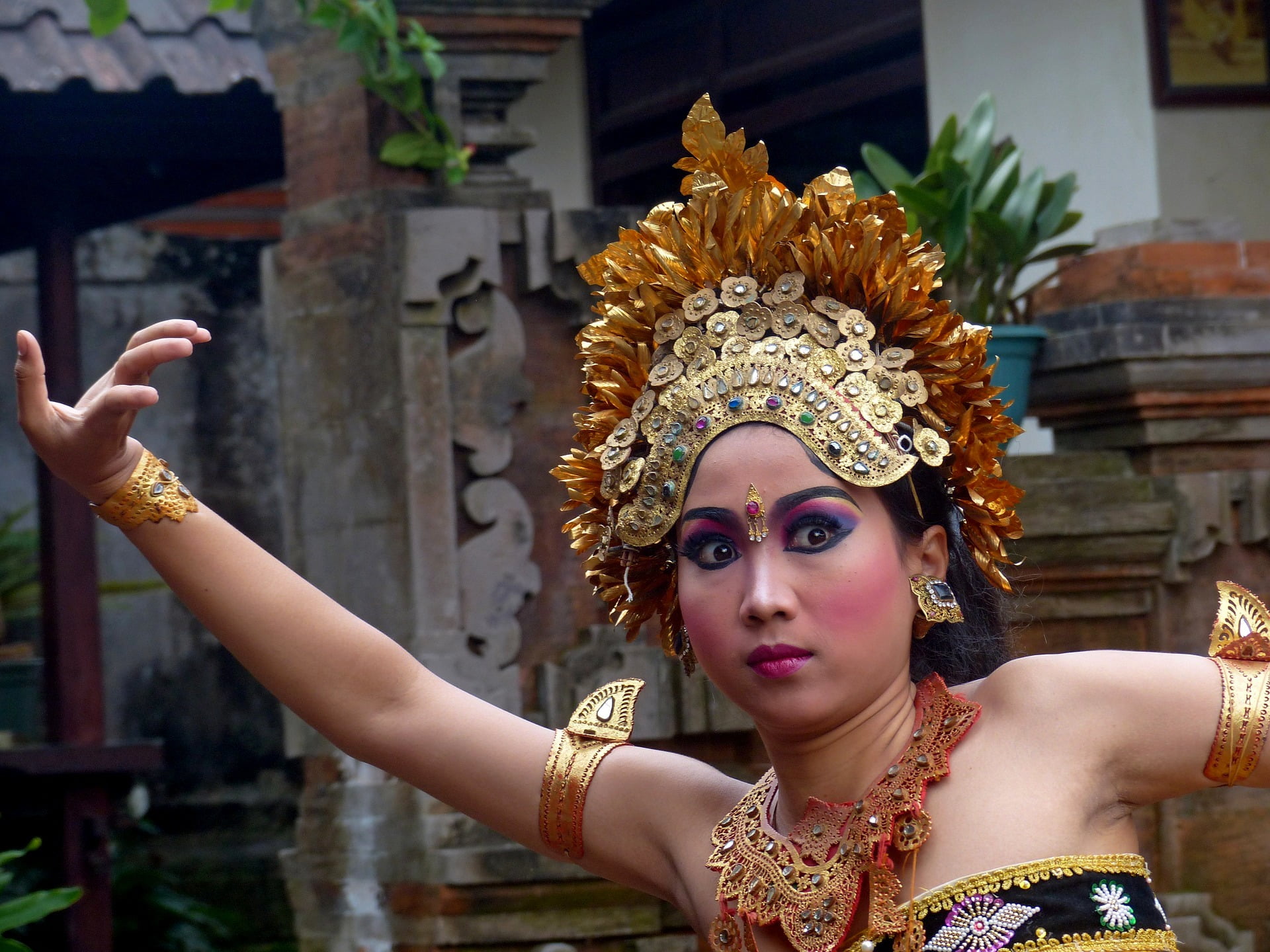