One of the ways to get to know the local culture is to see the famous Bali dance. The tradition here is so colorful radiating from every corner of the island be it the beach or the lush greenery inland. It’s something you’ll witness in everyday life, in daily offerings, traditional crafts, clothing, etc. That’s what I loved about the island the most. 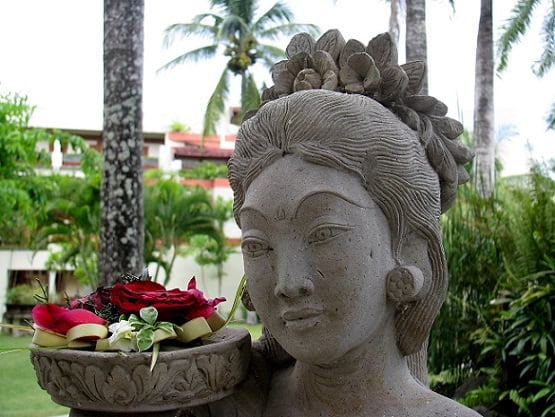 Petals next to statues

Every morning you will come across small packed offerings on the beach, for instance, carefully placed down on the sand. Those are the so-called canang sari dedicated to the supreme Hindu god. The small baskets are crafted from palm leaves and typically filled with red, white, blue, and yellow flowers, along with aromatic incense when put outside homes and temples. Each component of the offering has a certain meaning.

There are tours in Bali that will take you through this in detail if you are interested. You will learn not only about the local rituals but participate in a short prayer, get a blessing, or have a consultation with a priest. 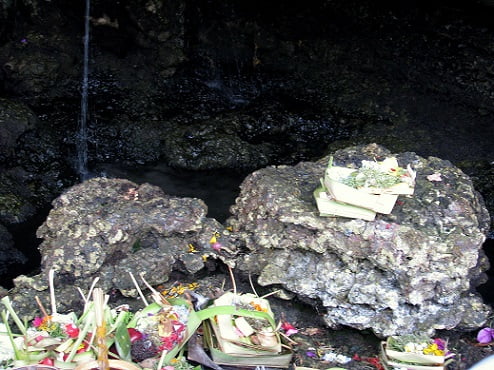 Typical offerings in one of the temples

As for me, I was eager to know more about the culture. I was suggested to go and see the traditional Bali dance at Uluwatu Temple. Walking towards the temple gives you the idea of witnessing something spectacular.

The temple itself is a famous landmark. Situated in the south of the island (25 km south of Kuta), on the steep cliff about 70 meters above the sea, Uluwatu Temple, or the Pura Luhur Uluwatu is considered one of the key temples and Balinese spiritual pillars. (See the previous posts for more about the Mother Temple, Tanah Lot, and Ulun Danu Beratan temples.) 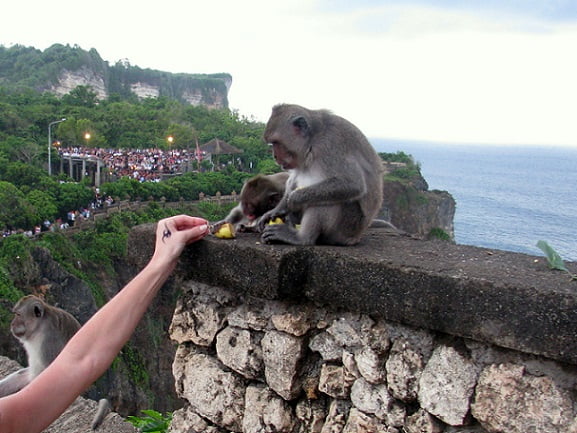 Hungry monkeys on the wall

Ulu means the top, watu – a stone or rock, hence the name of the temple “on the top of the rock”. It overlooks the Indian Ocean and the archaeological remains show that the temple dates back to the 10th century.

When strolling towards the temple, you will see hundreds of monkeys going in and out of the small forest. They are believed to guard the temple against bad influences and visitors often stop to feed them. (You can buy fruit at the entrance of the pathway.) Monkeys here are known for taking things from visitors. They will take your sunglasses, and pull your necklace or your hat down. So, it would be wiser just to give them something to eat. 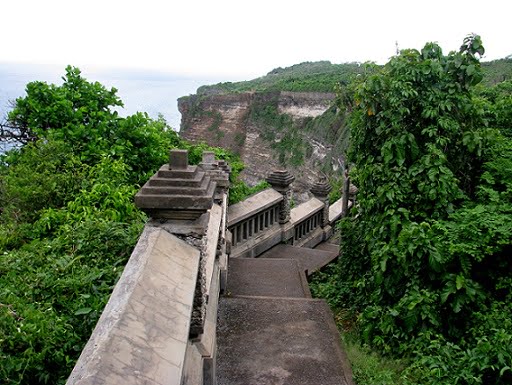 The gorgeous pathway toward Uluwatu

That walk along the fortified wall on the cliffside was one of the best sites I have seen on the island. I was walking down the pathway, glancing to the ocean on the right, giving fruit to small monkeys sitting on the wall, while the temple was peaking in front of me, on the steep cliff I was approaching. It takes about an hour to get from one gate to the other. 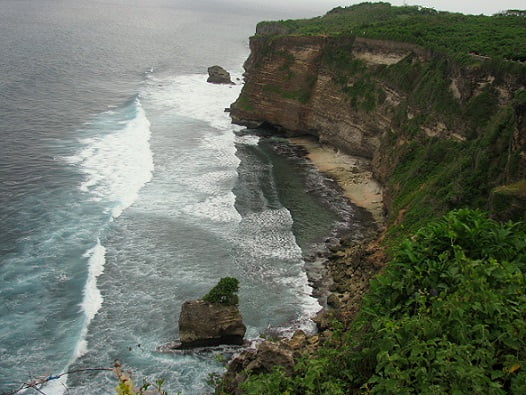 The temple is dedicated to the three divine powers of Brahma, Vishnu, and Siva who, according to belief, are united in one here. So, it celebrates the deity of all elements of life in the universe, but it is also believed to protect Bali from evil sea spirits. You should wear a sarong and a sash before entering the pathway. (I mentioned it in earlier posts.)

Just follow the path and you will get to the temple and its stage for the traditional Kecak Dance. It is performed every day with the sunset in the background. It’s such a surreal experience in such a surreal landscape! 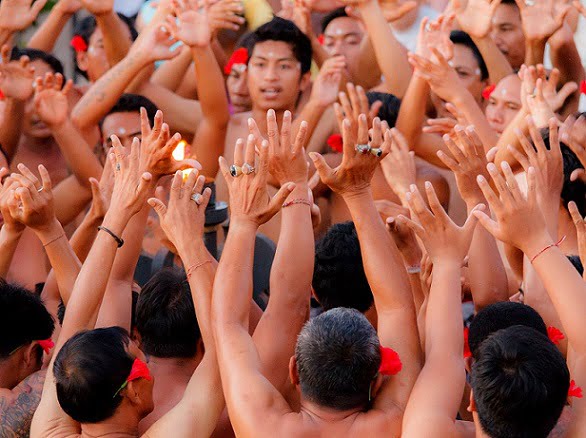 The Kecak Dance is a form of a Balinese music drama based on the Ramayana, the ancient Hindu epic illustrating the perpetual struggle between good and evil. It is performed mostly by a male choir, waving their hands and chanting “chak”. It’s done in a hypnotic beat to scare away evil spirits, depicting one of the Ramayana episodes. 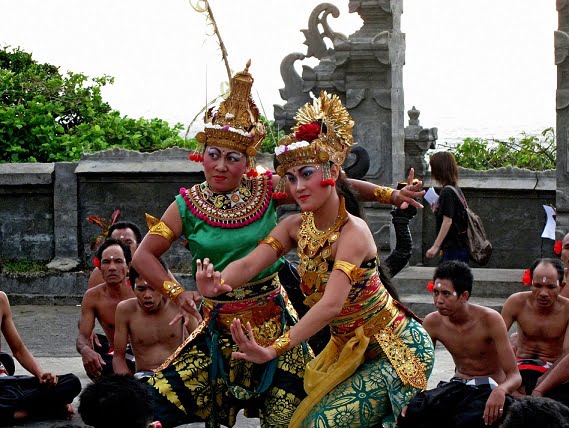 Interesting movements in the musical drama*

There is no public transport to Uluwatu Temple. The most convenient way to come would be to hire a driver or guide to get here in time for the performance. 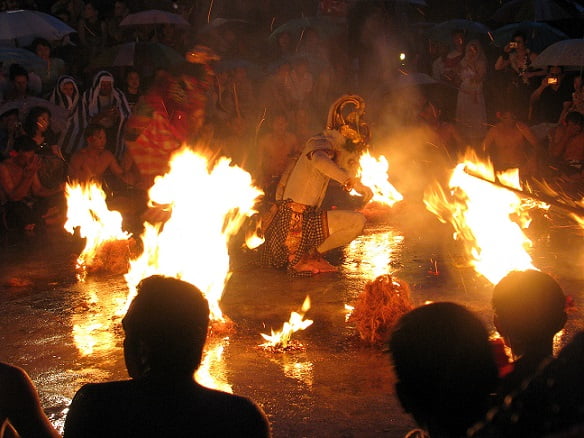 Kecak Dance finishes with a fire

There is one more Bali dance I went to see. It was while visiting the town of Ubud, north of the Nusa Dua, in the Batubulan village. This was the Barong Dance, a piece of Balinese mythology with ornate costumes, traditional moves, and unique musical instruments. This dance depicts the conflict between the good Barong, dressed in a fanciful lion-like costume, and the evil Rangda. 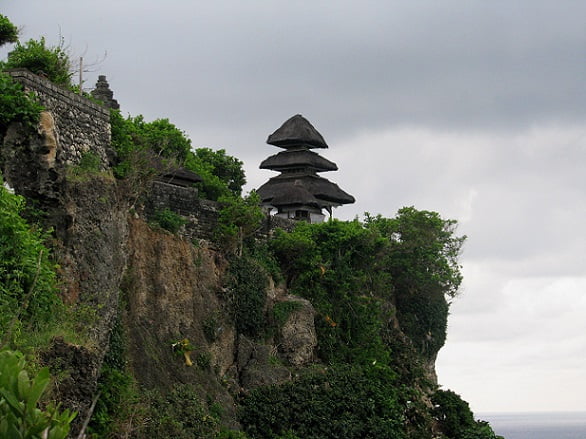 Many Balinese villages hold dance and music events as temple ceremonies. Some welcome tourists provided they discreetly observe and are dressed properly. You may also come across one-hour dance and music performances that take place in hotels and other settings, that are especially geared toward tourists. Even though they are not that authentic, you will still be able to get a glimpse of the local tradition and Bali dance. 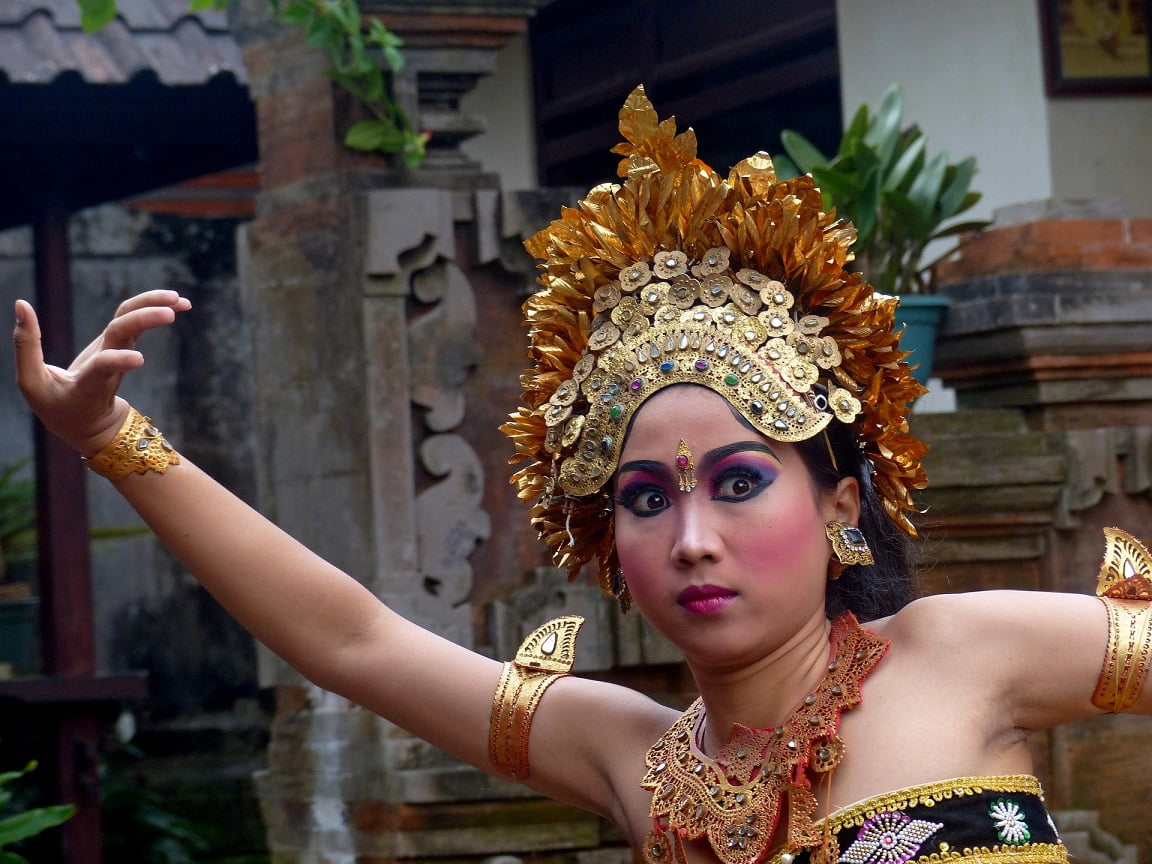 I was also mesmerized by the haunting percussion sounds of a gamelan traditional music and orchestra. The musicians play an assortment of instruments including native metal gongs, drums, chimes, cymbals, and xylophones.

And one more thing! They say that when you put the Barong mask on your door, it will prevent evil spirits from coming in. Oh, I just had to buy one! 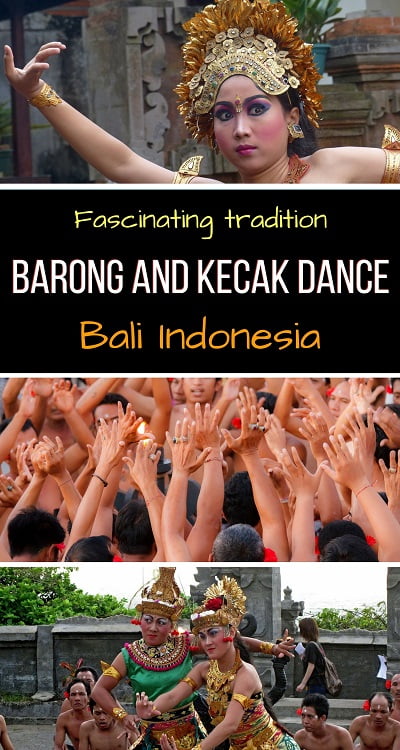 Things to buy in Bali 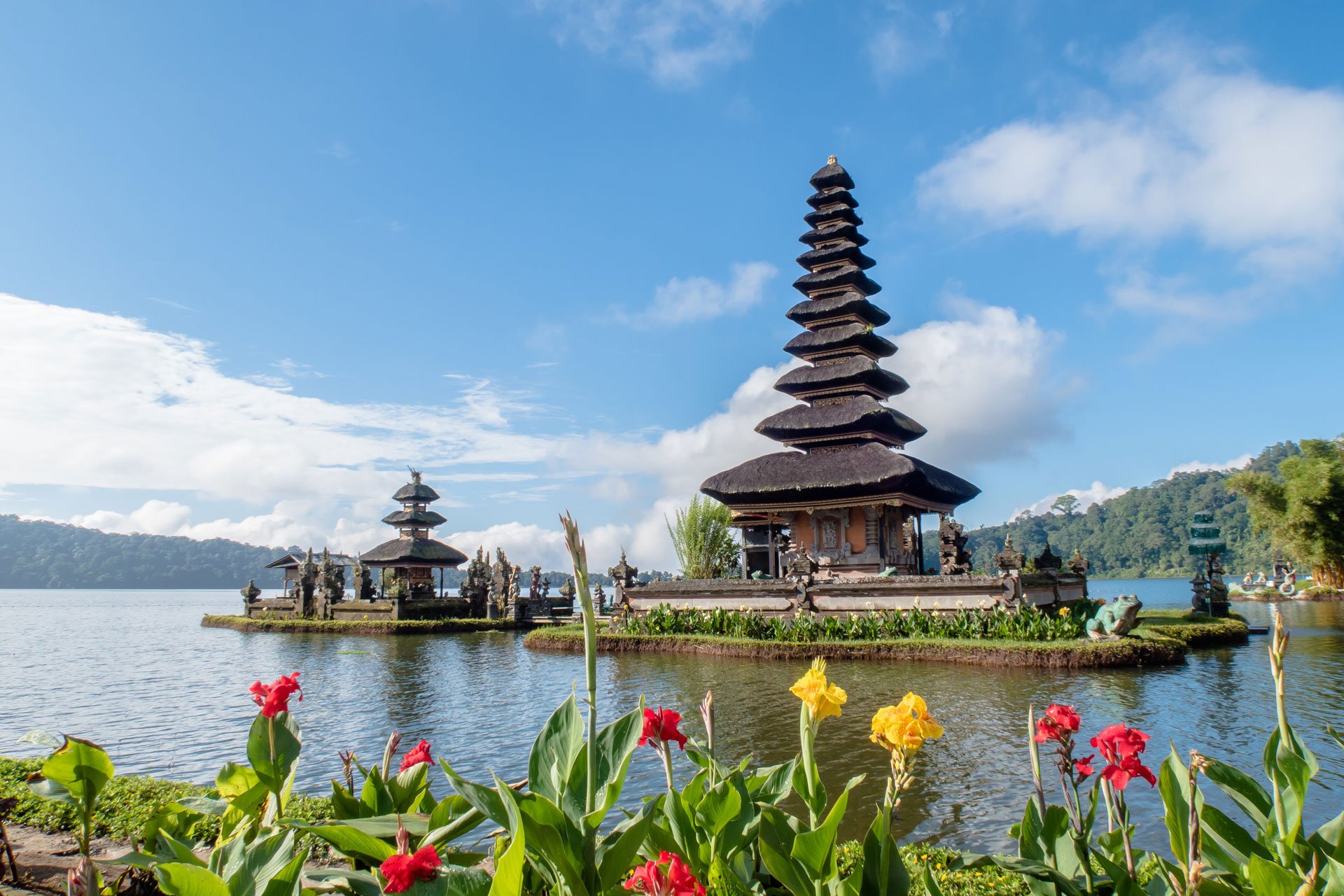 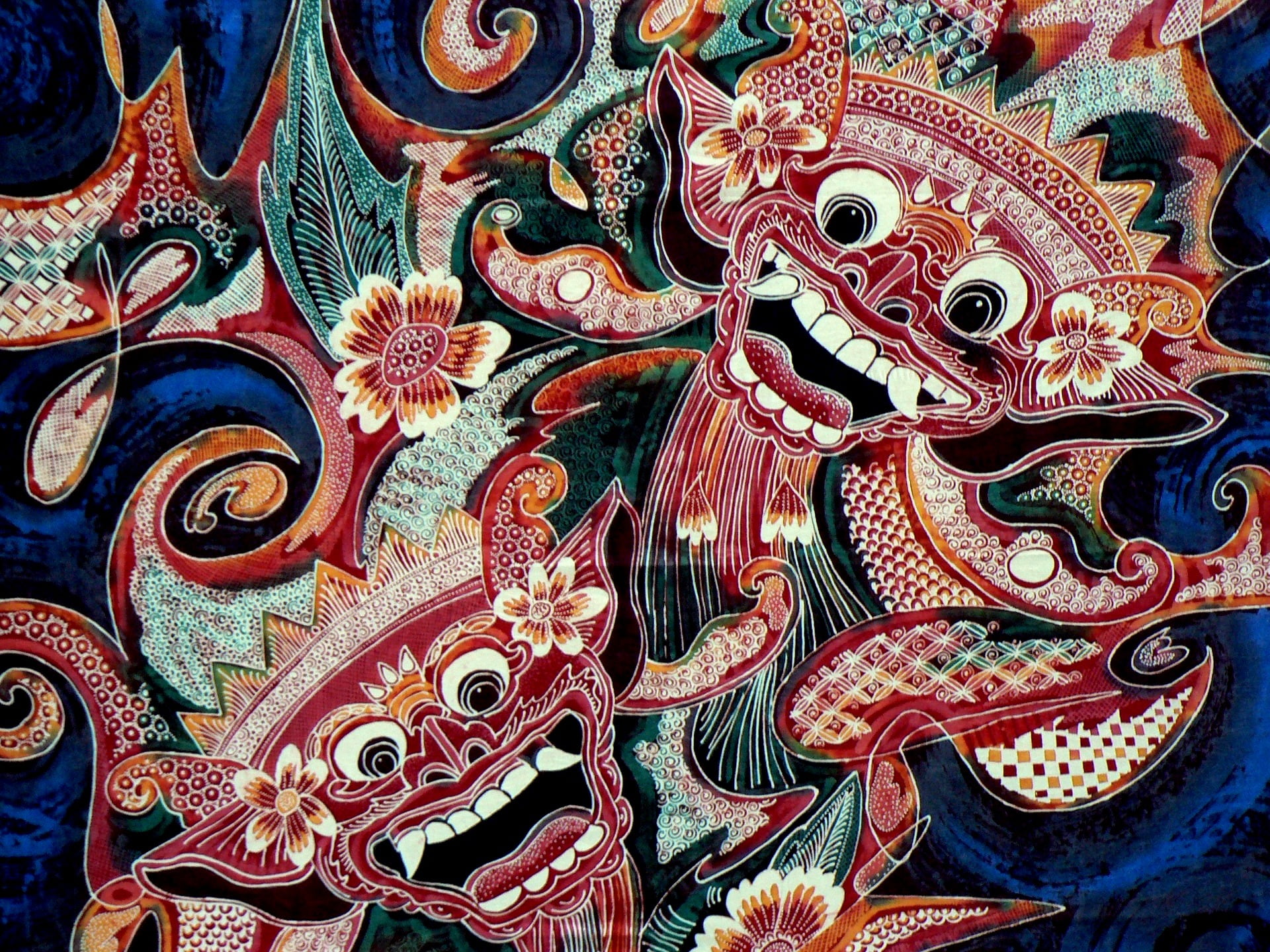