Things to do in Piran

You will be amazed by the things to do in Piran given that the Slovenia coastline is not large and one doesn’t expect to see that many sights in a small settlement like Piran. (At least I didn’t.) Of course, once you learn that this small town belonged to Italy until the mid-20th century, its influence is more than understandable.

So, if you are thinking about spending summer in Slovenia and wondering where to go, make sure to stop by Piran since this is one of the most charming places in the Slovene part of the Adriatic coast.

Located in the southwest of the country on the coast of the Adriatic Sea, Piran Slovenia is one of the 3 major towns in Slovenian Istria. It lies at the very tip of the Piranesi peninsula and is often referred to as the most romantic of all the coastal settlements in Slovenia. Its historical heritage, coastal ambiance, and modern way of life are all combined in a charming mixture of narrow allies and a lovely atmosphere. 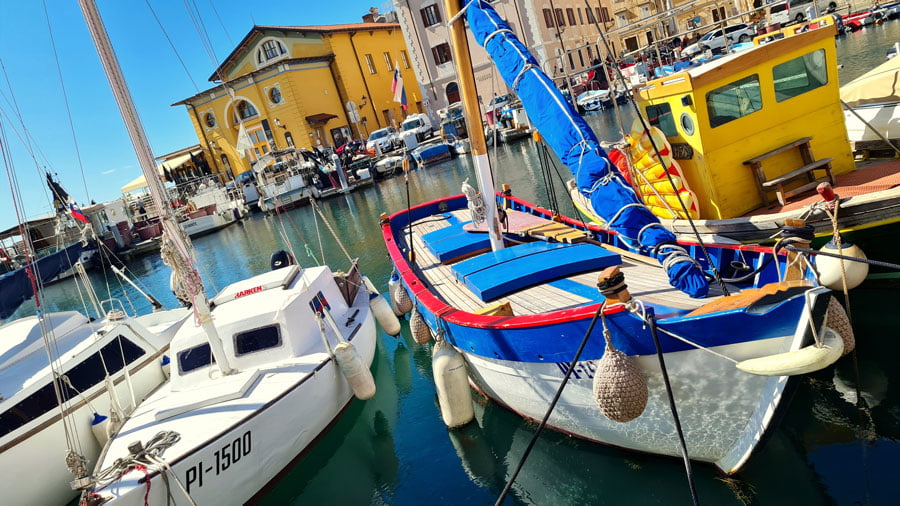 Piran was part of the Republic of Venice from the 13th to the end of the 18th century when it was annexed to the Austrian Empire. Even though it changed rulers a couple of more times in the upcoming centuries, it was ceded to Italy after World War I and then to Yugoslavia after WWII. 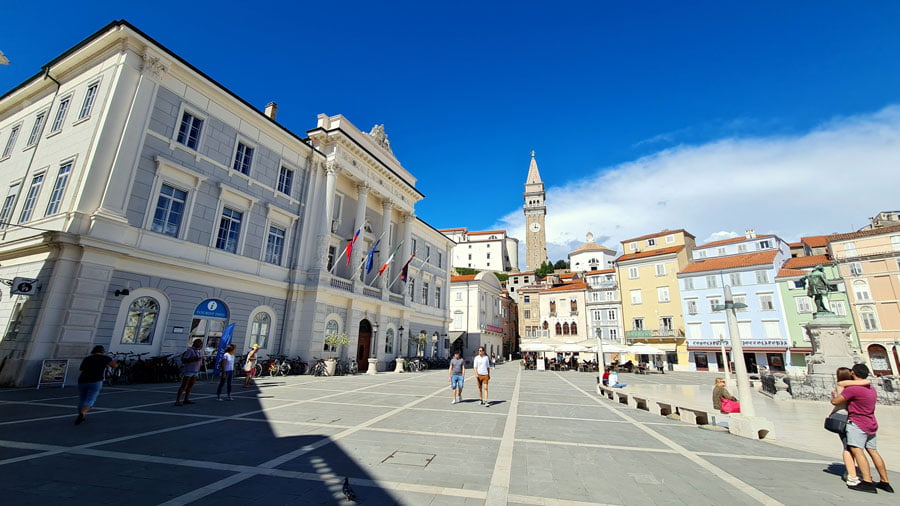 Here is an interesting fact: the first trolleybus line in the Balkans was introduced in 1909 – in Piran, only to be replaced by a tramway that was operational till 1953. 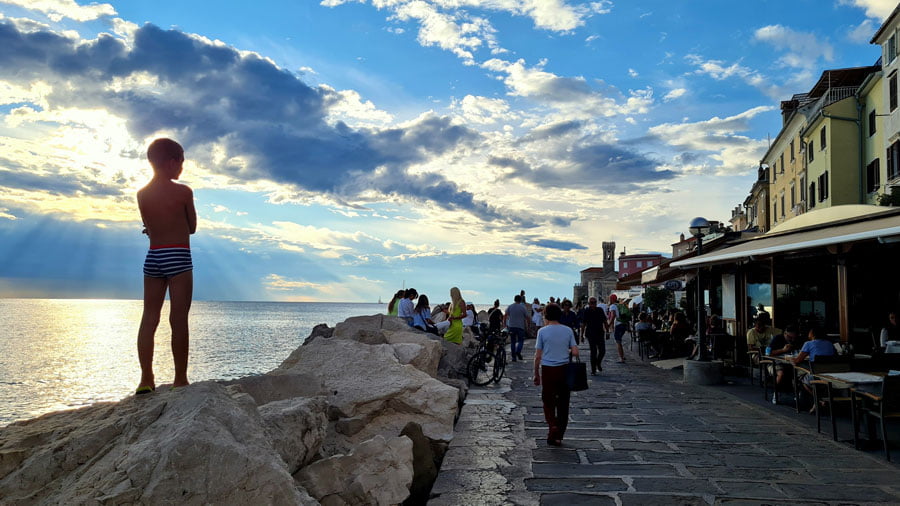 Sunset at the waterfront

Imagine medieval architecture and narrow streets. That alone is a promise of interesting things to do in Piran when it comes to sightseeing. If you are a history buff like myself, this will be a charming destination with a lot of hidden gems. 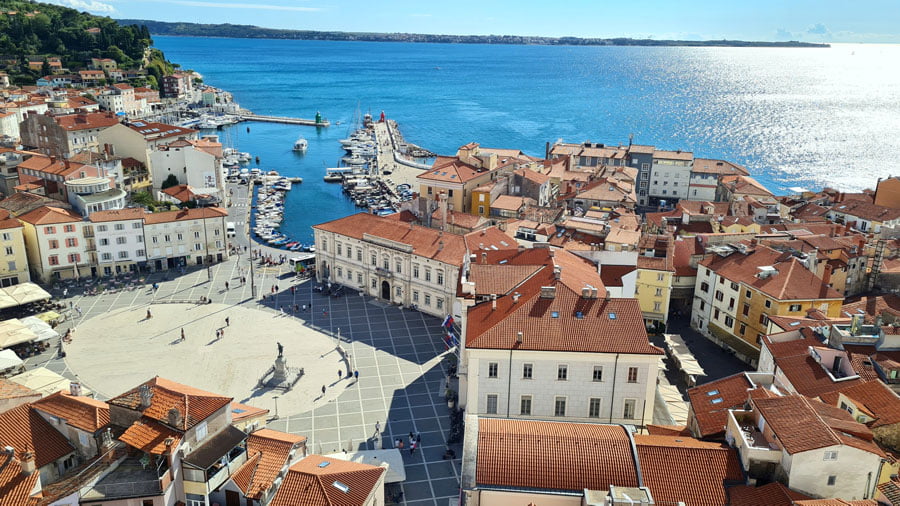 Tartini Square from above

One of the best-known attractions in Piran is the Tartini Square. Given that this was the birthplace of the famous 17th-century violinist and composer Guiseppe Tartini, the central square is named after him. The square is the best place to start exploring since St George’s Church and the Franciscan monastery are located nearby. 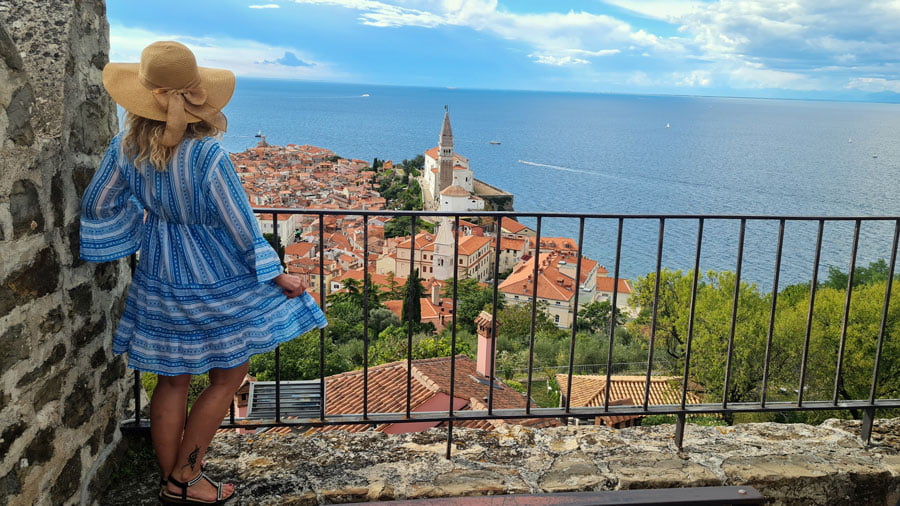 St George’s Cathedral is the largest church in town. It is believed that St George saved Piran during one of the violent storms and thus he became a patron saint of the settlement. This 14th-century church is rich in wall paintings influenced by the Venetian school. The bell tower is built in the 17th century. After climbing its 146 steps, you will reach a terrace area where you can enjoy one of the best views of Piran. 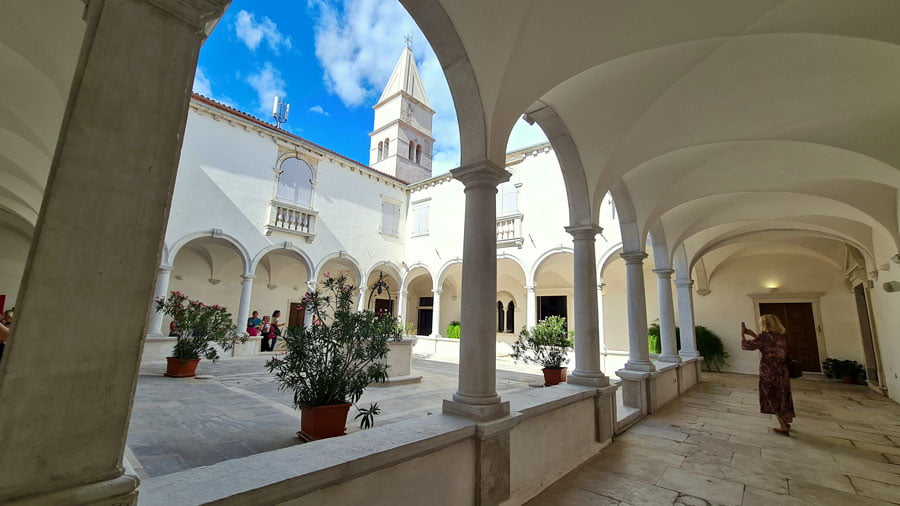 Arches in the monastery courtyard

It is believed that the Monastery of St Francis was probably founded in the 13th century. It keeps a great collection of music literature and Venetian artists’ paintings with a few books that date back to the 15th century. I was charmed by its courtyard with white arches all around. 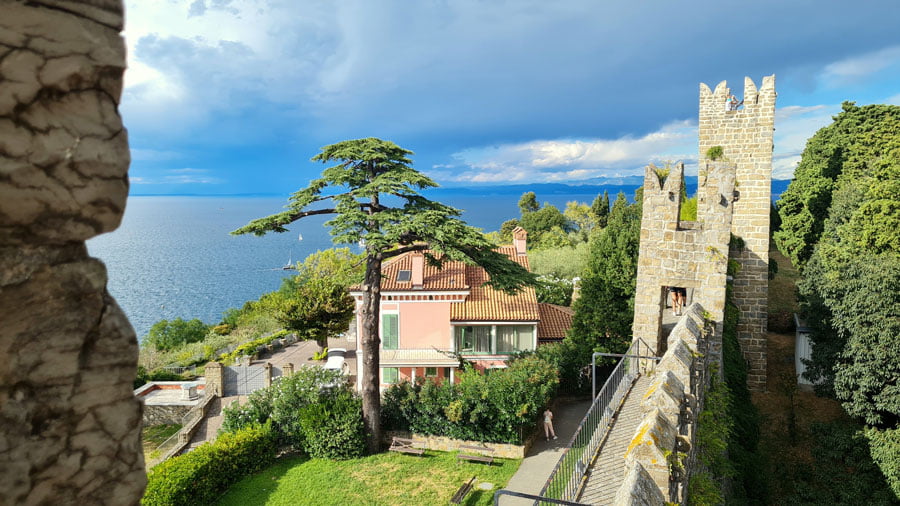 Piran city walls were mentioned for the first time in the 7th century but most of the remains one can see today date to the 15th. There are still a few gates to be visited while there were seven such entrances to the city at an early age. This is a must when you visit Piran. I made some of the best photos from its balconies. Also, it’s not every day that you can sneak up along the heavy walls and crawl up the old squeaky stairs. 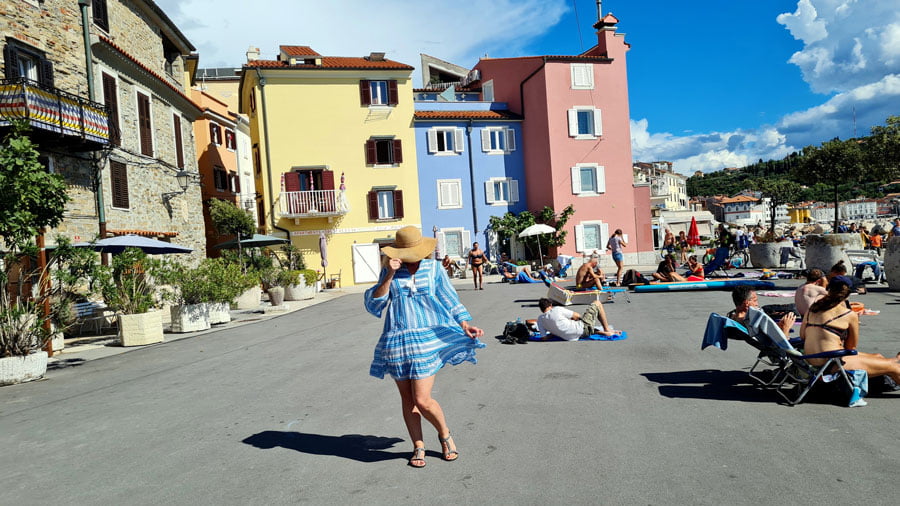 Things to do in Piran – Sunbathe on the waterfront

If you come here in summer, your things to do in Piran will include water sports and going to the beach. Have in mind that Piran doesn’t have a beach, at least not close to the central area. Still, people bring their towels and sunbathe next to the stones lined up to protect the coast from the stormy sea. Like in any other coastal town, you will find a lot of opportunities to go scuba diving or sailing. Also, there are a few interesting museums to see – the Museum of Underwater Activities and the Magical World of Shells. The shell of the world’s biggest snail can be seen here. 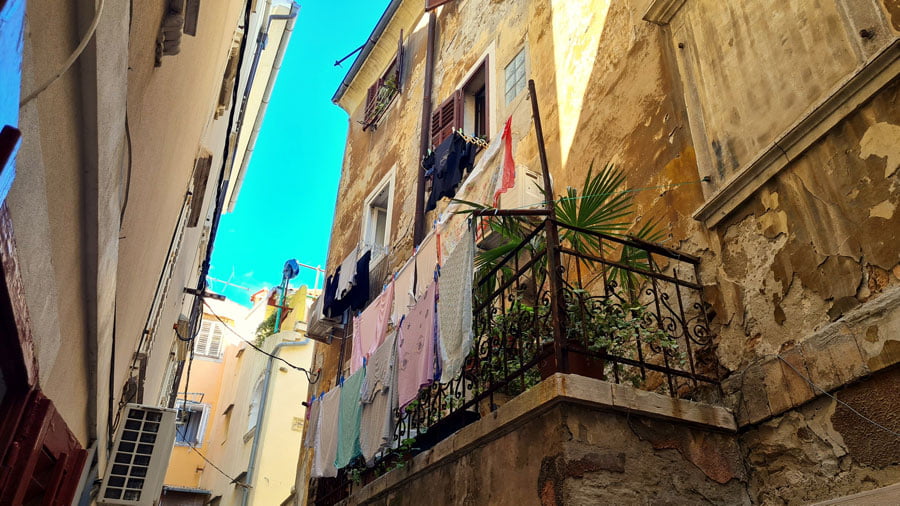 When it comes to architecture, one of my favorite things to do in Piran was just taking long walks through its narrow allies with laundry hanging from old windows. The charming atmosphere of getting lost among high pastel facades when you are only a couple of meters from the sea can be overwhelming, in a good way. 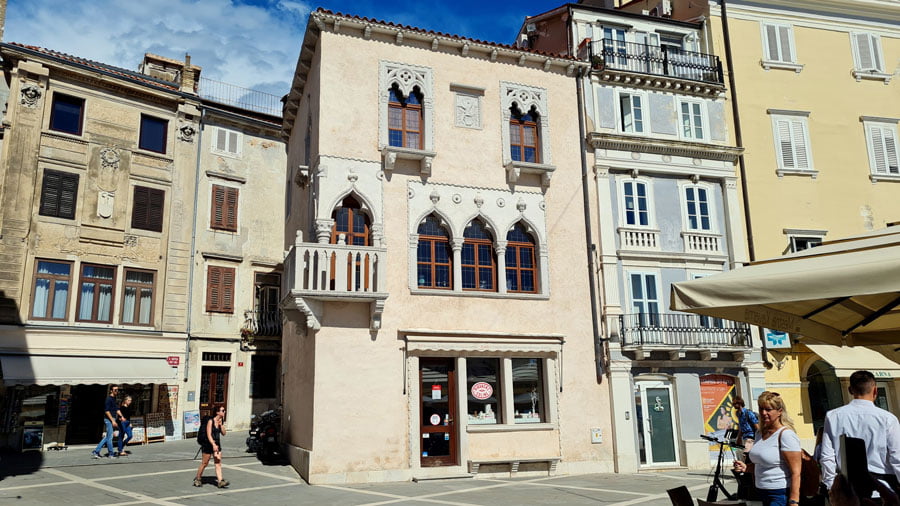 There are also a couple of important buildings to see in the central area. The first one is the 19th-century Town Hall adorned by the stone statue of the lion holding an open book. The second is one of the most famous buildings in Piran simply called the Venetian House. It’s designed with lovely architectural elements and ornaments. According to legend, a Venetian merchant fell in love with a girl from Piran and built here a palace. It provoked serious gossip and so, the merchant put up a stone relief with the inscription „Let them talk“ (Lassa pur dir). 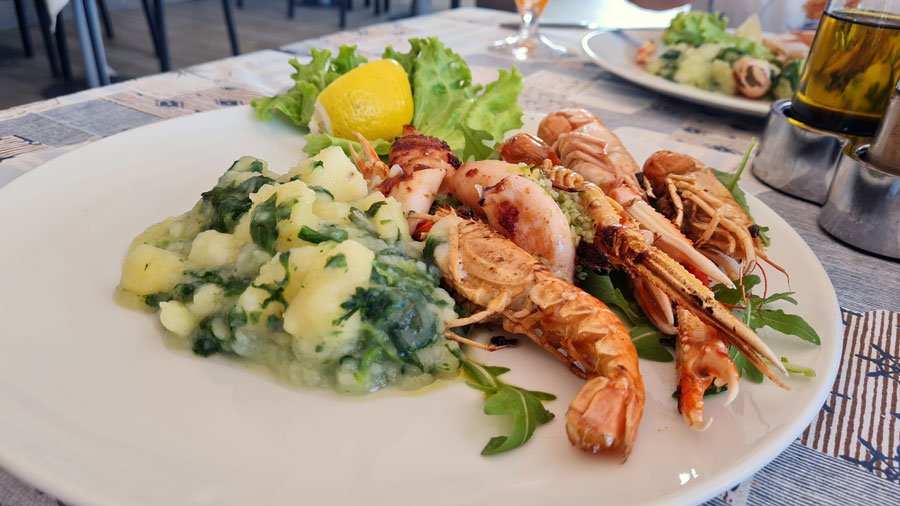 And I almost forgot! One of the things to do in Piran has to do with food. Choose among numerous restaurants and taste some delicious seafood. (The shrimps were so tasty!) 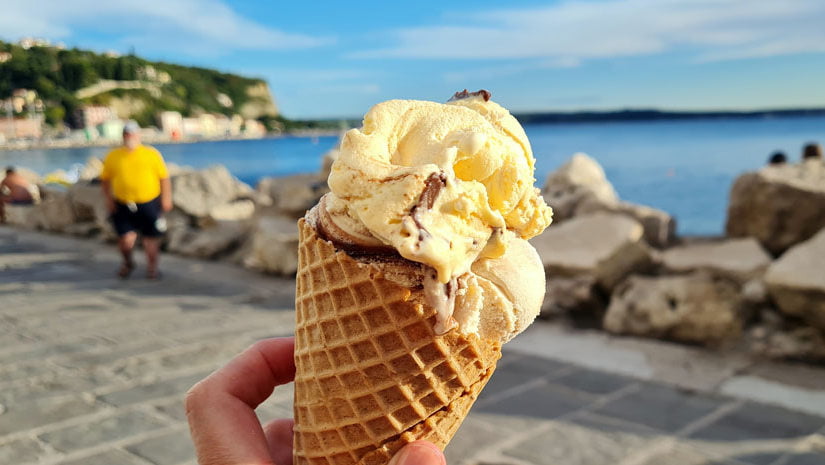 Still, make sure to leave some space for ice cream since this is another genuine Italian legacy to Piran. 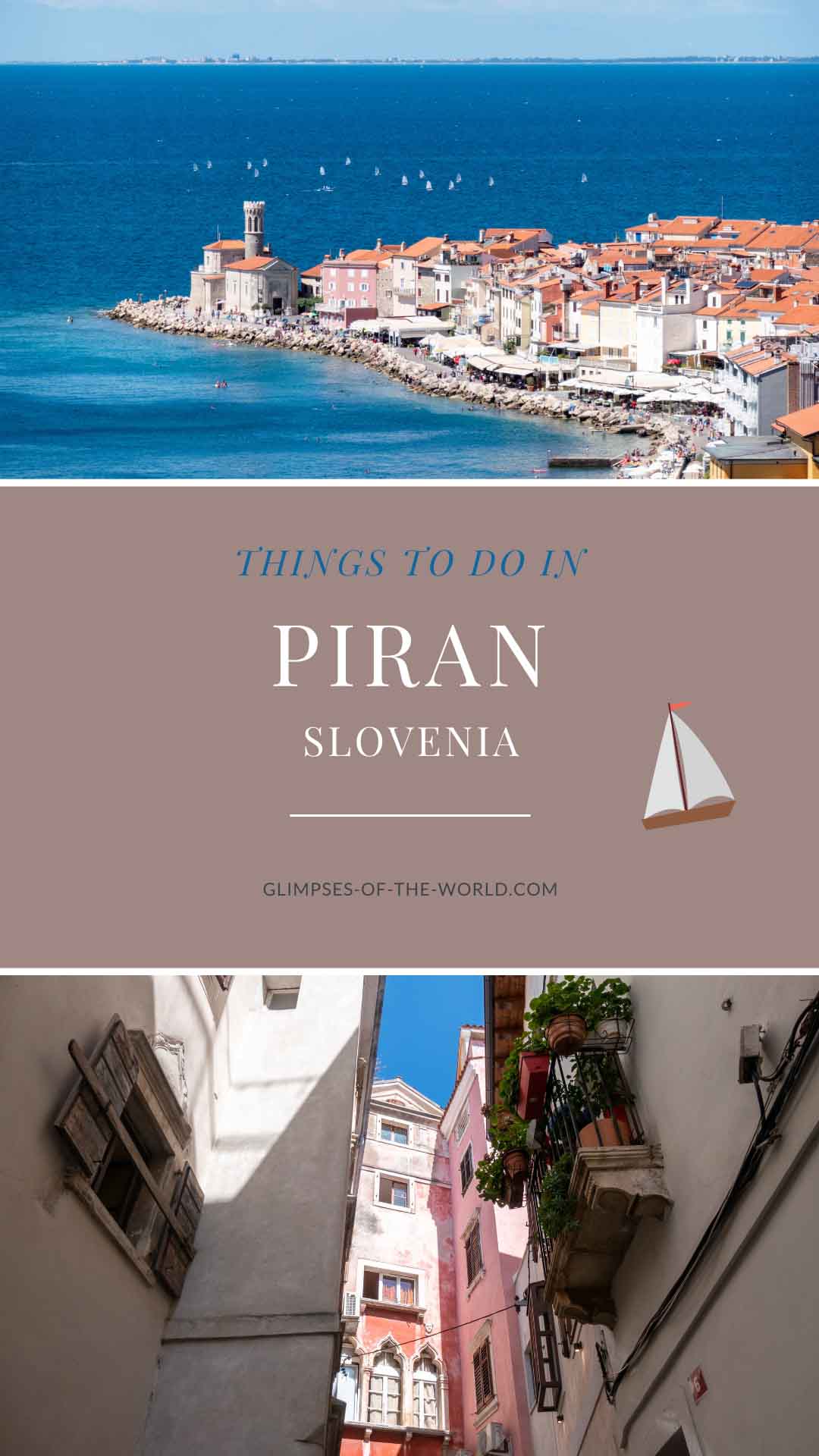 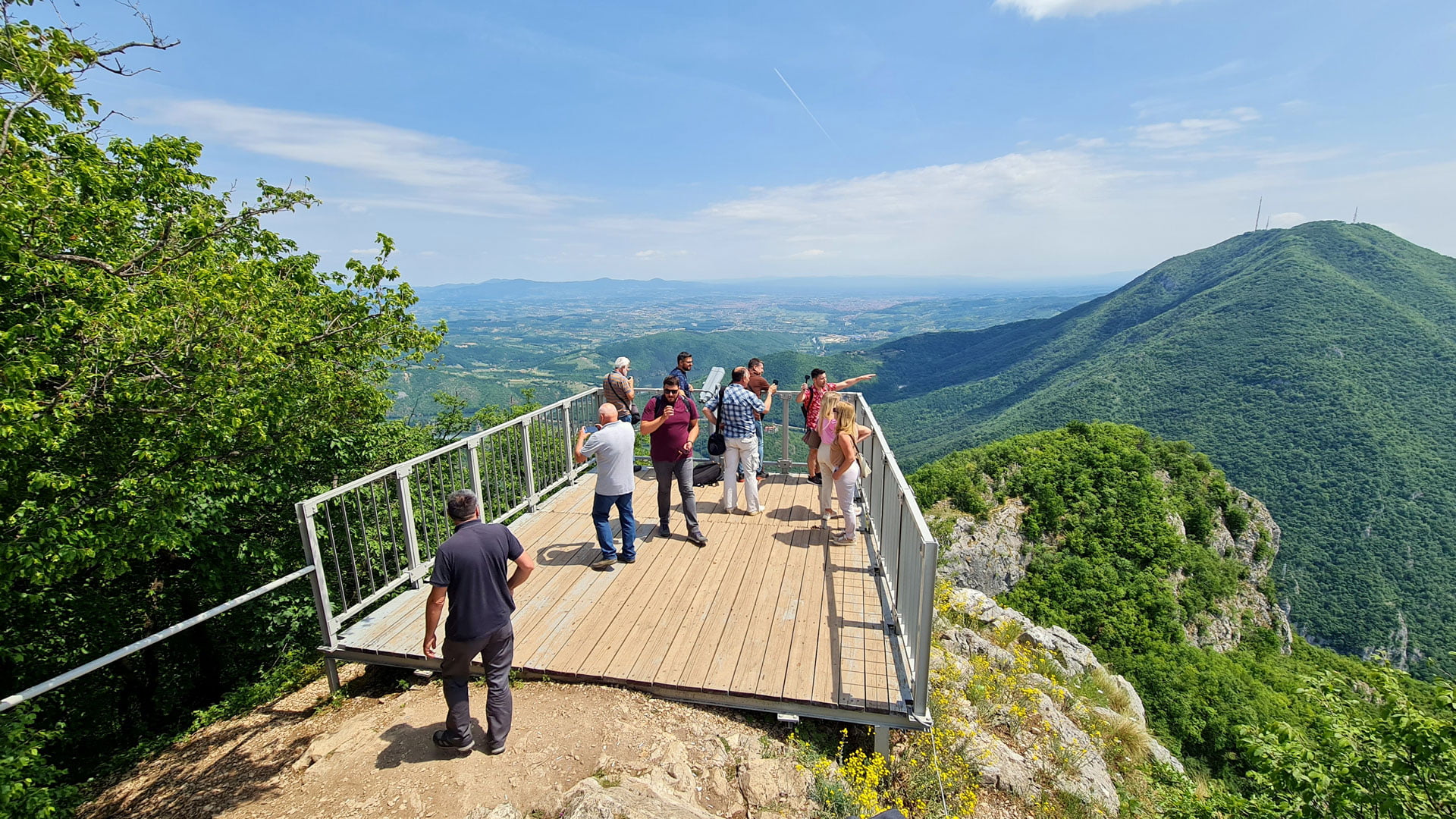