This post is titled West Serbia, Places to Visit even though this is only half of the tour I’m planning to do. This time we traveled from Čačak, via Guča, Arilje, Ivanjica, to Požega and Kosjerić, and I didn’t go alone.

I had an opportunity to visit west Serbia more than once and I am proud to say that a nice collaboration with West Serbia Tourism Organization is ongoing for years. (A link to the west Serbia brochure that I wrote can be found at the end of the post.)

Why was the journey special this time?

Not only was I able to see some familiar faces from local tourist organizations but I also traveled with some new folks, a group of colleagues to whom I was a kind of a guide. Hence, the idea came for this post. Additional information about each town is to be found on the blog in the Weekend in Serbia section while I will introduce a few west Serbia places to visit, along with the colleagues I had the pleasure to travel with. 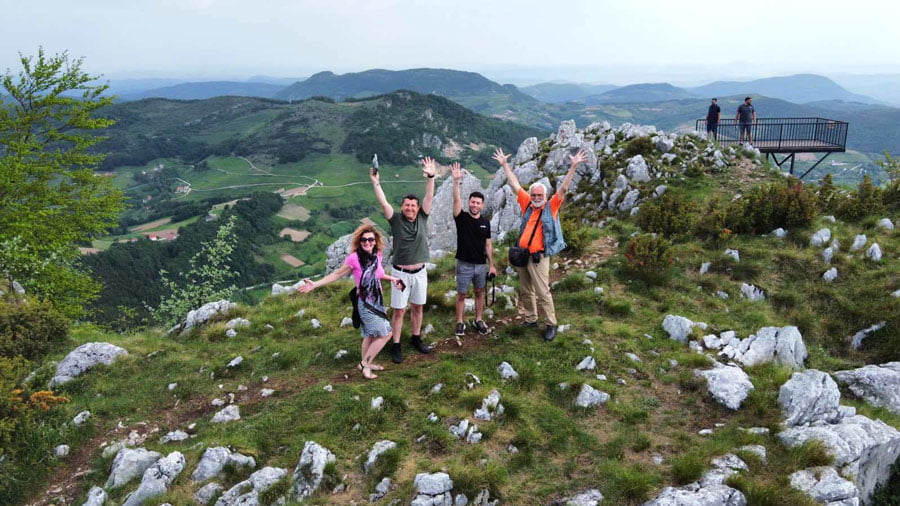 Our team on Mučanj mountain

In Things to do in Čačak post there will be more places to visit but let me remind you that one should see the National Museum dating to the first half of the 19th century, Nadežda Petrović Gallery, and the Roman Bathroom built from the 1st to the 4th century.  Take a walk around the central area and then head to Kablar Mountain. We were accompanied by Gordana, Dejan, and Goran from the Tourist Organization of Čačak. 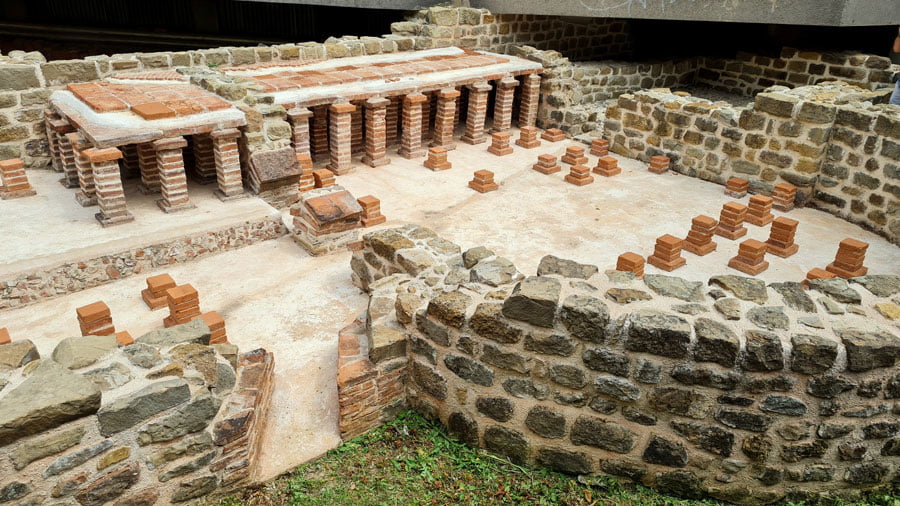 One can drive almost up to the top of Kalbar although there are numerous hiking trails. The parking space is about 600 meters from the viewpoint with a nice path leading to the top. Kablar is 889 meters high while the viewpoint is at 885, facing Ovčar and West Morava. 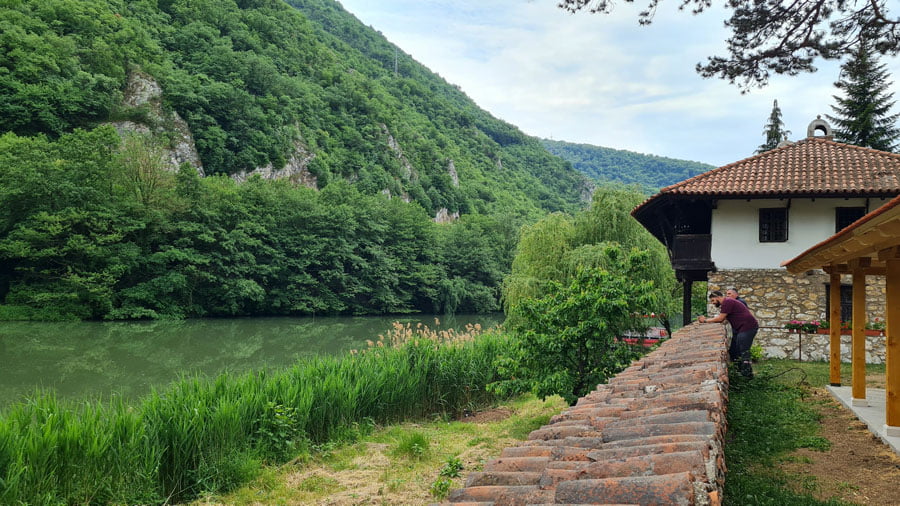 “The only thing to say is that everything is so green!”, says Eksekjel, a guy from Chile who moved to Serbia in 2019 and fell in love with the country: “This is the unspoiled nature. I would recommend to everyone to come to west Serbia and see Kalbar.”

We asked what he would say to foreigners who plan on visiting Serbia. Eksekjel (to whom we gave a nickname Eksić so that he would get the Serbian name extension “ić”) answered shortly:

“They should know that Belgrade is not Serbia.”

Eksekjel has a youtube channel and an Instagram account Hola.Serbia where he presents Serbia’s places to visit in Spanish. We were so thrilled to have him on our team. (Should I mention that he was the only one who brought a Serbian flag with him!) 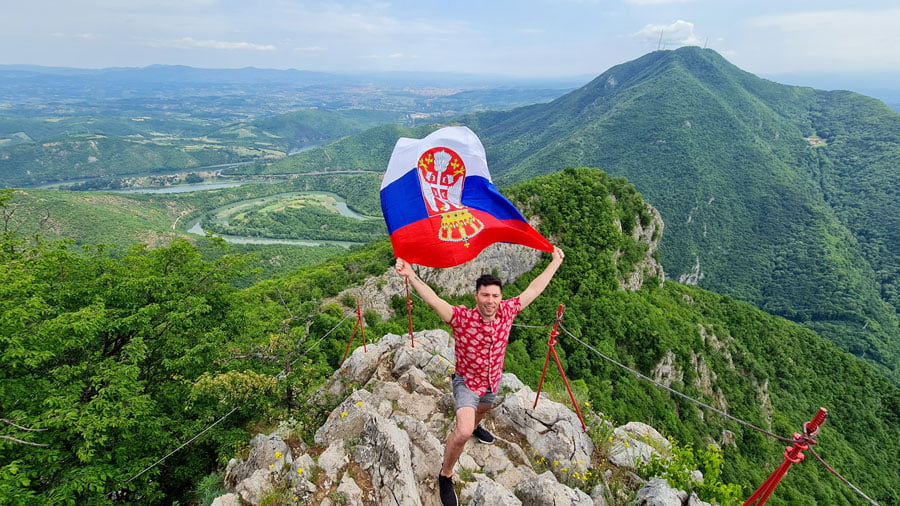 We ended our visit to Ovčar-Kablar Gorge with a pleasant cruise. The boat took us straight to the restaurant Plaža in Međuvršje. The fish soup and the local trout were just delicious! 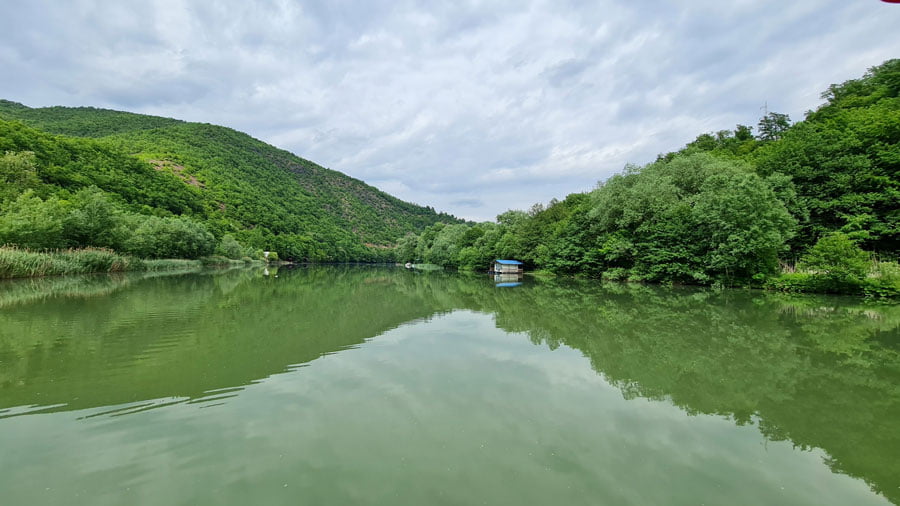 Lovely landscapes along the Ovčar-Kablar Gorge

From Čačak we went to Guča where Marijana from Dragačevo Tourist Organization met us in front of the Trumpet Museum dressed in a traditional Serbian costume.

Even though we were all bloggers and influencers, we felt like tourists with Marijana trying to take another selfie with her. 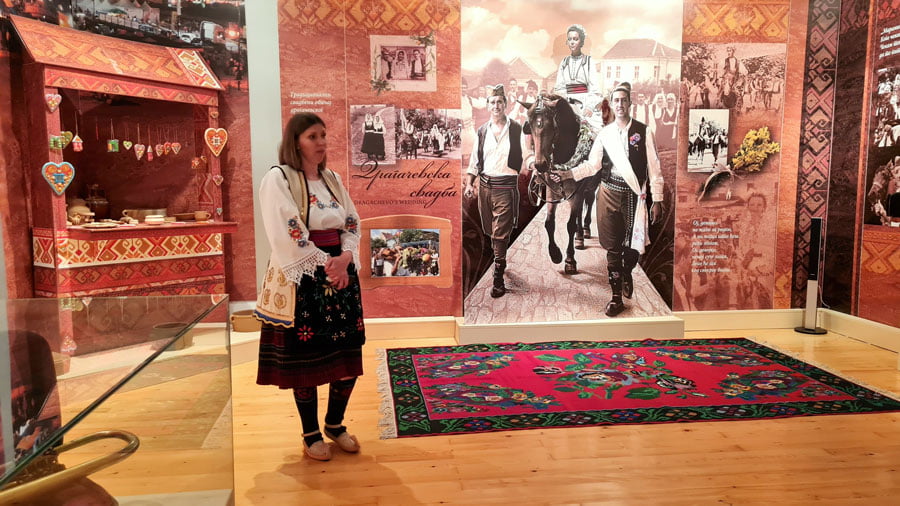 Marijana from the Tourist Organization of Dragačevo

Our dinner couldn’t go without the local trumpet players, of course. The band called Dragačevo Trumpets reminded us why Guča is so popular worldwide. Some of us decided to come to the Trumpet Festival this August. 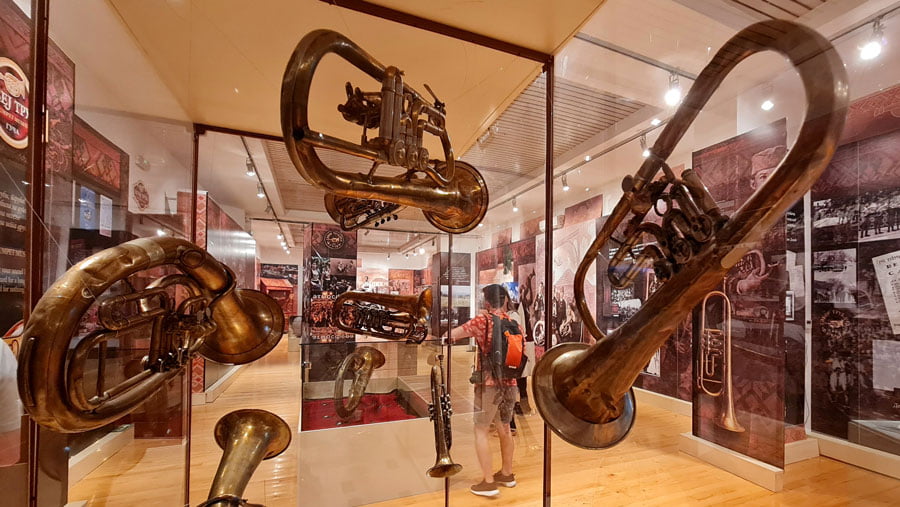 The next morning, we were off to visit a couple of Ovčar monasteries. We were told about St Trinity Monastery by the local monk while the nun from Sretenje Monastery served coffee and sweets. What a nice way to start a day! 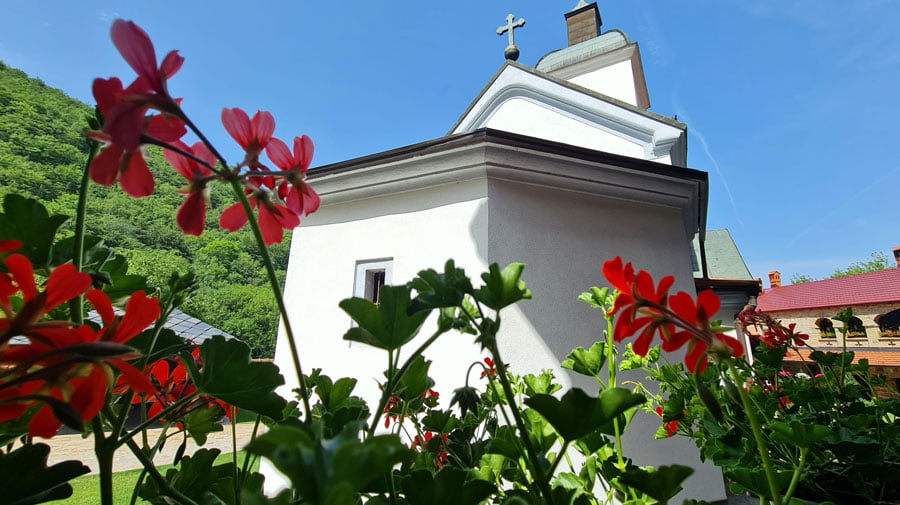 After another half an hour, we were in front of the famous Saint Achillius Church in Arilje. Ana and her colleagues from the Tourist Info Center explained that this was the endowment of the 13th-century Serbian King Dragutin. We saw its magnificent interior with extremely important frescoes. 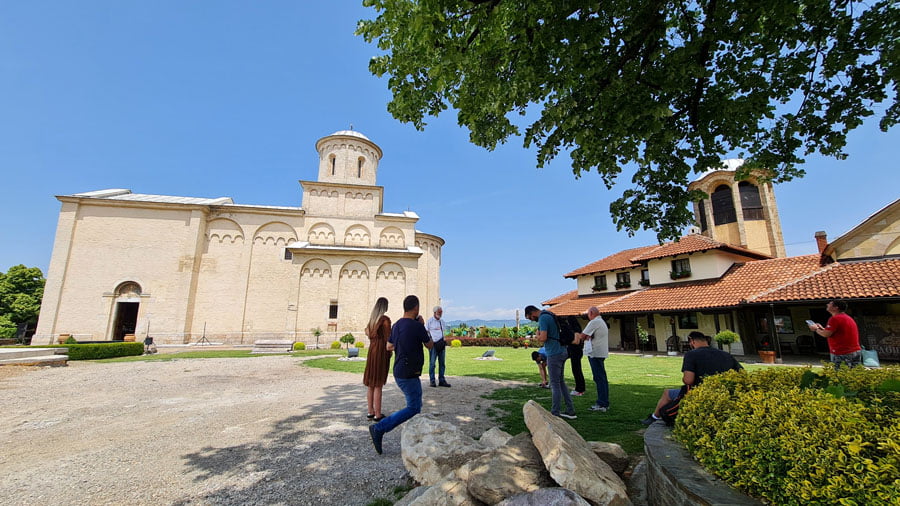 A meeting in front of the church

“Even though west Serbia is the most visited region in the country, there are still some hidden gems to be discovered. Take Arilje and its Saint Achillius Church as an example. I was blown away by the fact that the Blue Angel fresco is as important as the White Angel from the Mileševa Monastery in Prijepolje, and that its fresco depicting Christ was declared the most beautiful in Paris in 1971”, Dragica says.

Dragica runs and edits the Events in Serbia site. We loved her stories about when she went to events popular among the elderly dedicated to traditional instruments, where everybody thought she got there by accident. She doesn’t like to be photographed that much, so we took a lot of pictures of her lush hair instead. 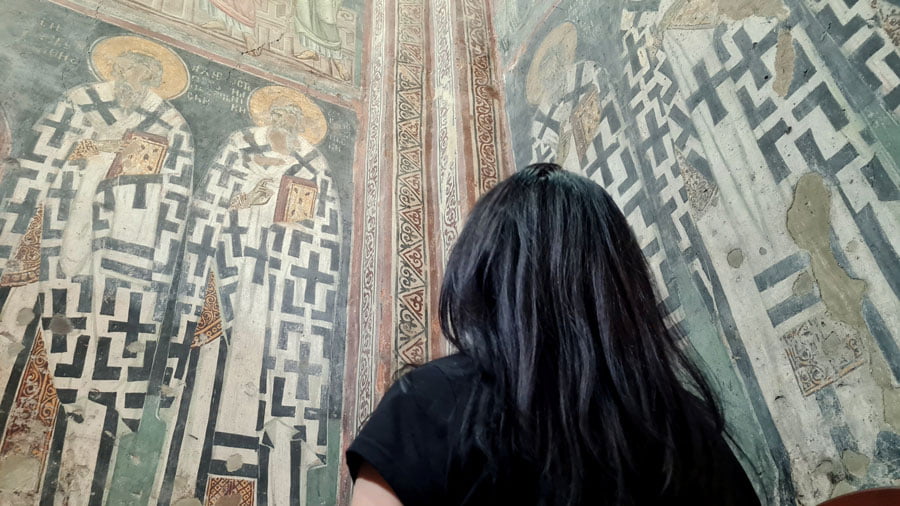 Dragica in front of the St Sava fresco

We visited the new legacy exhibition dedicated to Dobrilo Nenadić, took a stroll around the town, and went for lunch at the Raspberry Hill restaurant. Our aperitif was a raspberry juice, and dessert – Hot Raspberry. Even the Wi-Fi password had something to do with raspberries. Of course, it did! 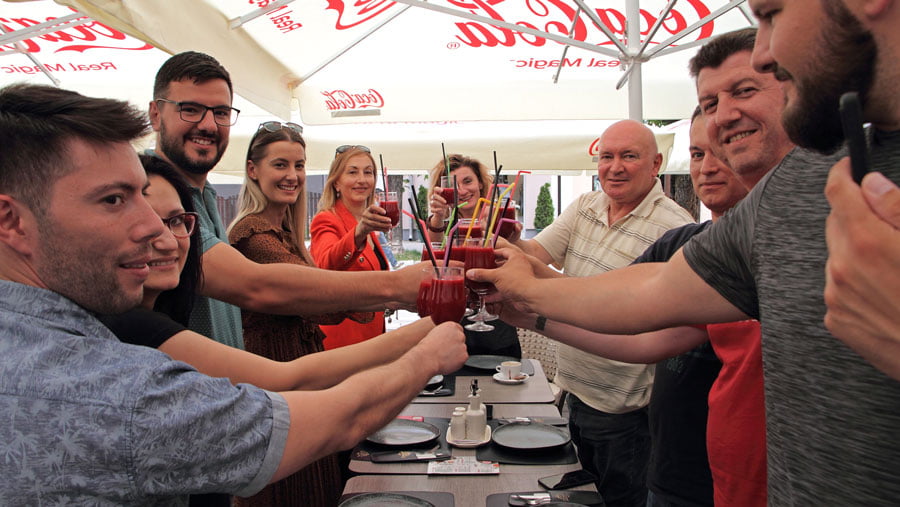 Cheers with a raspberry juice (Courtesy of D. Bosnić)

Ivanjica was the next town on our places-to-visit plan. We stopped by the Park Hotel to meet Ostoja from the Tourist Organization of Ivanjica for a coffee and then took off to an interesting hilltop accommodation. I took numerous photos next to the Smurf’s house. It got me the nickname Smurfette for the end of the trip I even began responding… 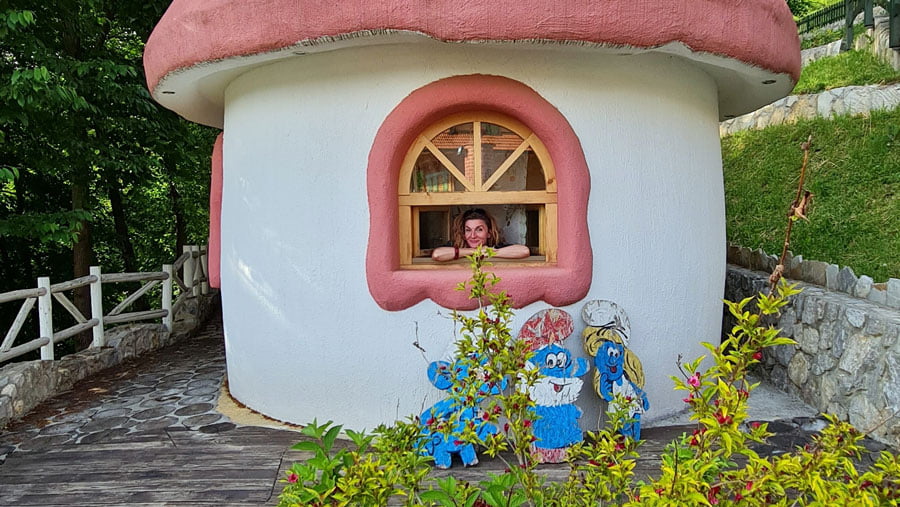 Inside the Smurf’s House

The so-called Roman Bridge we saw next was a true inspiration for taking photos. Zoran and Borko from the production firm ZooM from Užice took some lovely drone clips.

“I was born and raised in Užice but still get surprised by certain parts of west Serbia. Of course, everything is better in good company as we gathered from all over the country to try and capture the beauty of the area. I can’t decide whether I like better monasteries, views, food, or this Roman Bridge”, Zoran says. 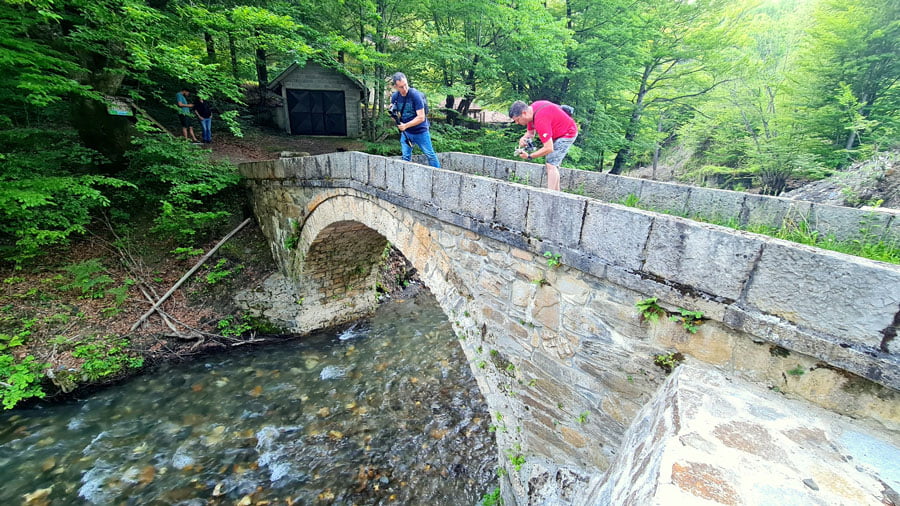 Zoran (right) and Borko on the Roman Bridge

Hadži-Prodan Cave was another surprise in the evening where Janko, head of TOI, came to meet us. Then dinner at Bar Café, and another great location the next morning – Mučanj. 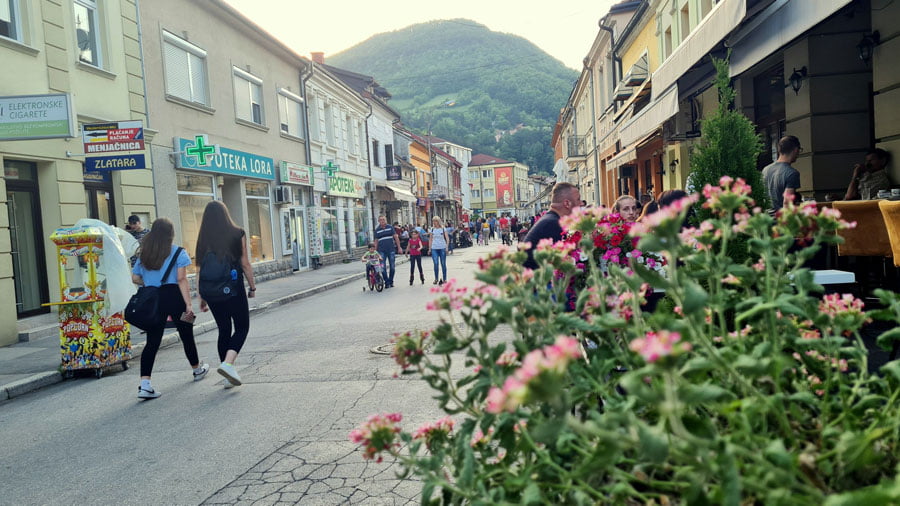 “It is important to introduce a wider offer of west Serbia apart from the large tourism centers. Besides its gastronomic specialties, organic food, and unspoiled nature, there is an active holiday option and rural and religious tourism as well. We are pleased to be included in this west Serbia promotion and we can confirm that if you visit west Serbia once, you will continue to come back”, Aleksandar and Vladimir stated, siblings who run Kompas kaže Srbija.

Their website helps tourists to get to know Serbia better. It is run by Aleksandar and Marija, but Vladimir also joined recently.

Aleksandar agreed to become Alejandro given that Eksekjel was turned into Eksić.

(Things to do in Ivanjica) 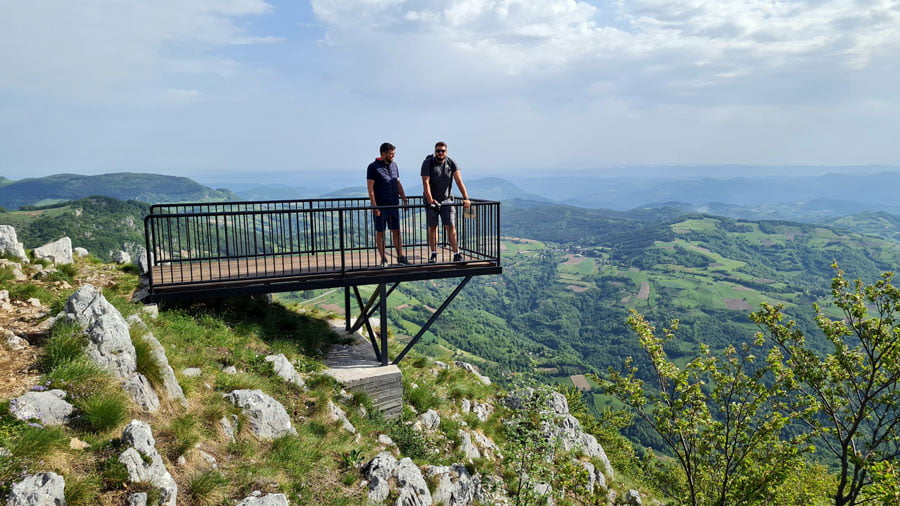 Aleksandar (left) and Vladimir on Mučanj

We were in a hurry to catch a bus in Požega because Eksić had to go back to Belgrade for work. An hour later another colleague of ours came to the group, Aleksandra from the Tourist Organization of Belgrade. 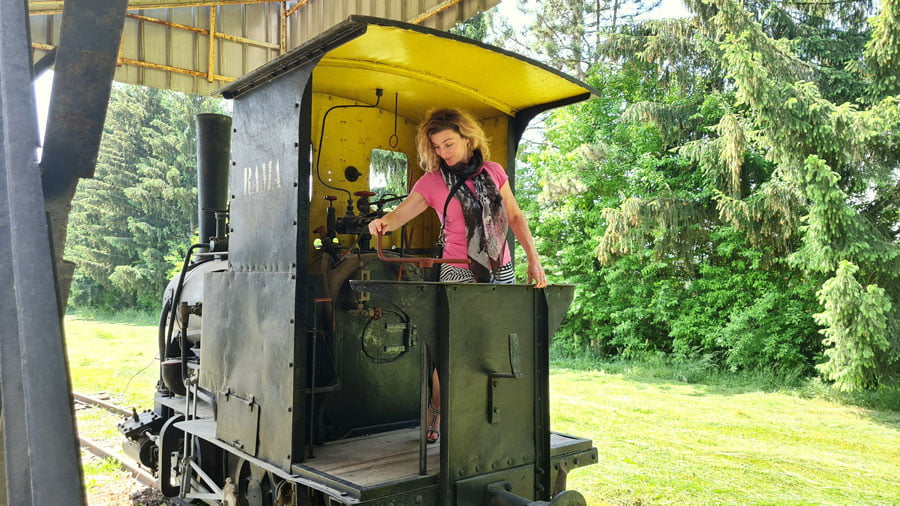 West Serbia Places to visit: Stop by the Railway Museum

Nataša and Ivana from the Tourist Organization of Požega took us to see the Railway Museum where a delegation from Serbian Railways from Belgrade came to show us around. They didn’t mind that we were peaking around, climbing old locomotives, or looking into old tickets. (This was all captured by West Serbia Instagram stories.)

And then – nature! First, we stopped by Kamenica River and then went to Tometino Polje. It was so hot that we were joking that it should be stated that visitors shouldn’t come here if it’s not “in the middle of summer – at noon”. 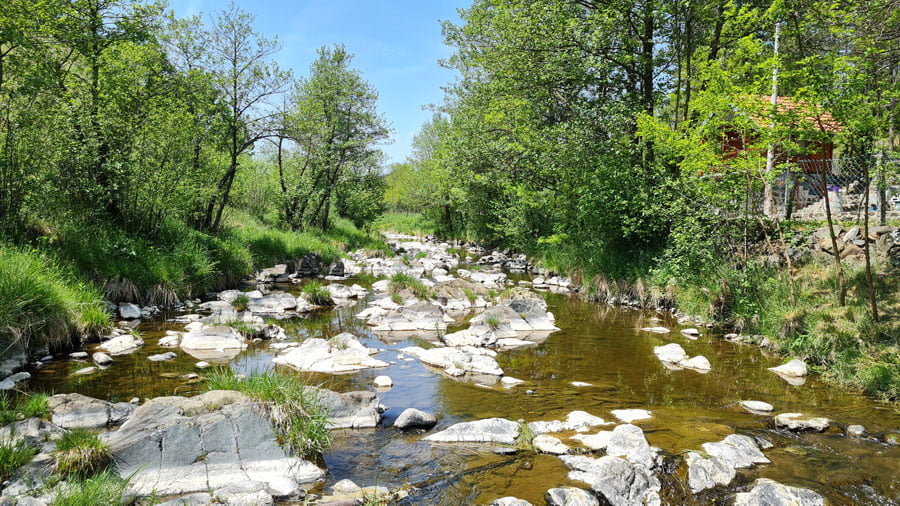 “I knew that a lot of west Serbia places to visit were going to be those I have already seen. It turned out that some are totally new to me. Tometino Polje, for example, is yet to become a hit”, said Dragan Bosnić, an experienced photographer and publicist.

According to him, a group of bloggers was especially interesting: “Their time and work style is something I have missed, unfortunately, but I still wouldn’t trade my archaic easy-going way of doing things.”

It was a true pleasure to see Bosnić who spoke of a time when films were developed, talking to young Vladimir who showed his drone footage. 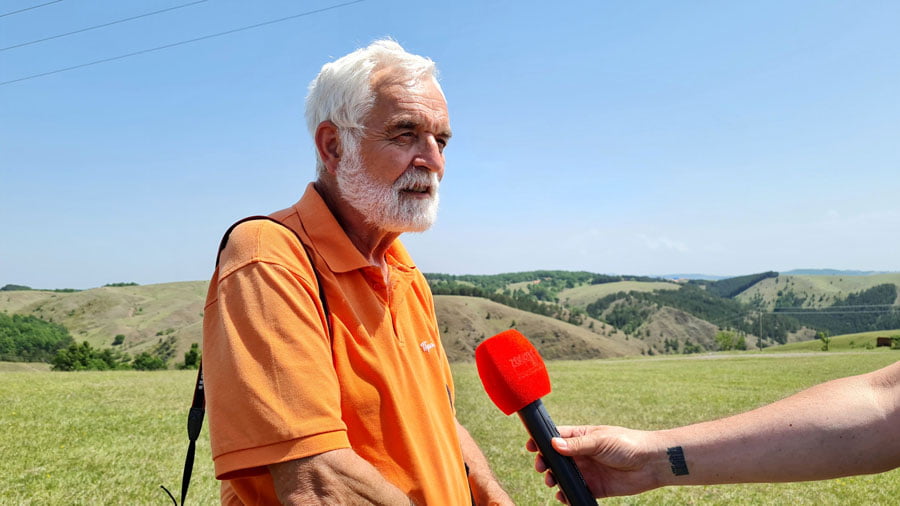 A visit to Požega wouldn’t be complete without a trip to Gornja Dobrinja village where Serbian 19th century Prince Miloš Obrenović was born. They offered us refreshments at the Church of Holy Apostles Peter and Paul where Miloš’s father was buried. After having lunch at Krčma restaurant in Požega, we took a stroll around the famous round square and headed to Divčibare mountain. That is where Mr. Radosav from the Tourist Organization of Kosjerić took us to spend a night. 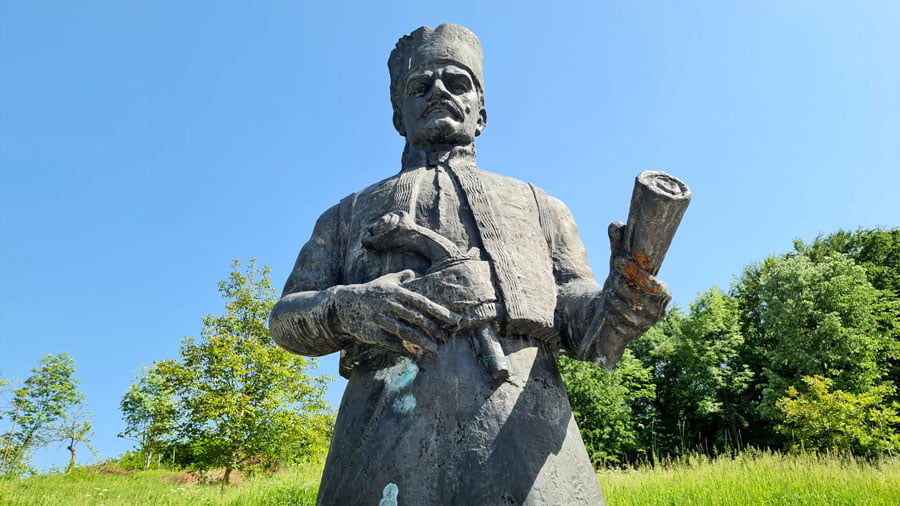 It was quite natural after such greenery we saw to spend the last day of west Serbia places to visit in countryside households. Rural tourism became a thing right in these villages decades ago. 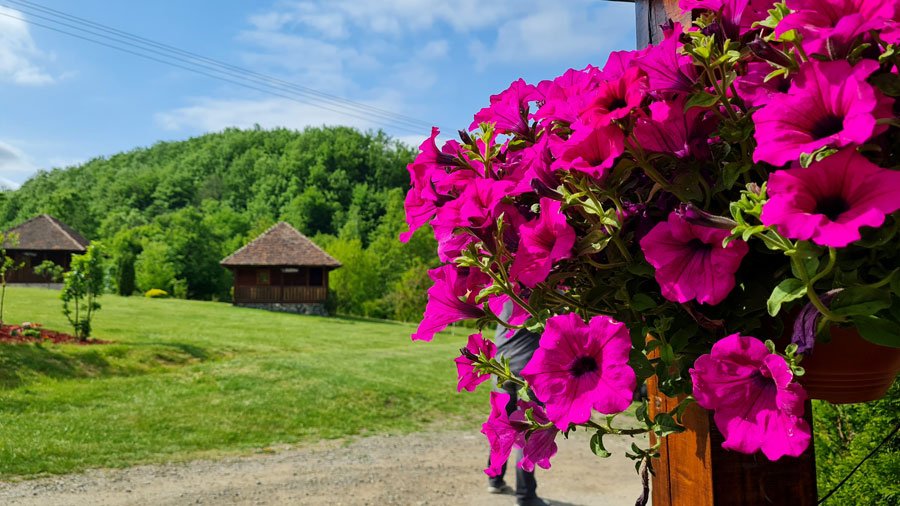 Gostoljublje household served a delicious breakfast after which we went to see The Class of Our Ancestors in an old school in Subjel village. Modern kids were given traditional hats and knitted bags. 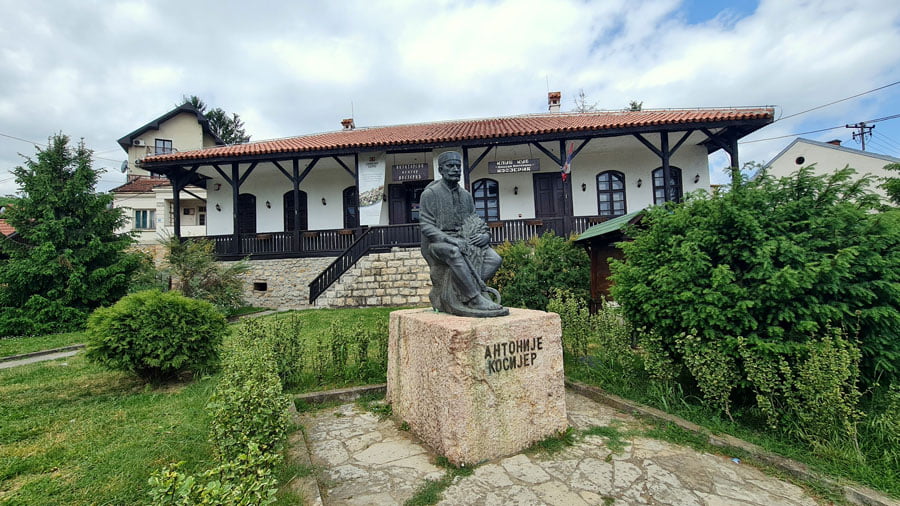 In central Kosjerić Ljubiša Đokić waited for us next to the Sreten Đukić’s Fountain to tell us how he was one of the founders of the Serbian Olympic Committee. Athletic gatherings are organized in Kosjerić in recent years. We went to see Stari Han as well which was built in 1854 as a caravanserai. The village originated around the building afterward. 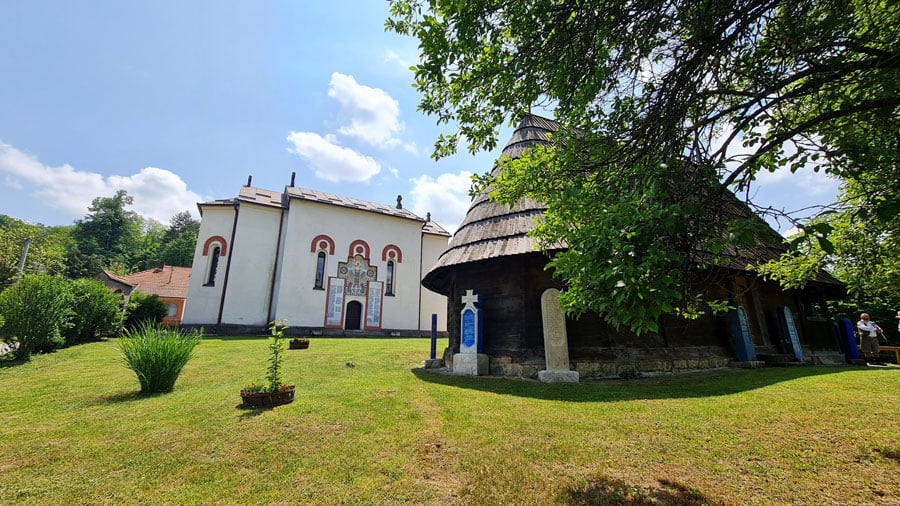 Seča Reka, the courtyard of the church

Seča Reka village and another attraction: an interesting traditional church at the same spot where the 15th-century one stood. There is a special kind of tombstone around it, those that were put for soldiers who died in WWI abroad. (Visiting Mokra Gora and Kosjerić) 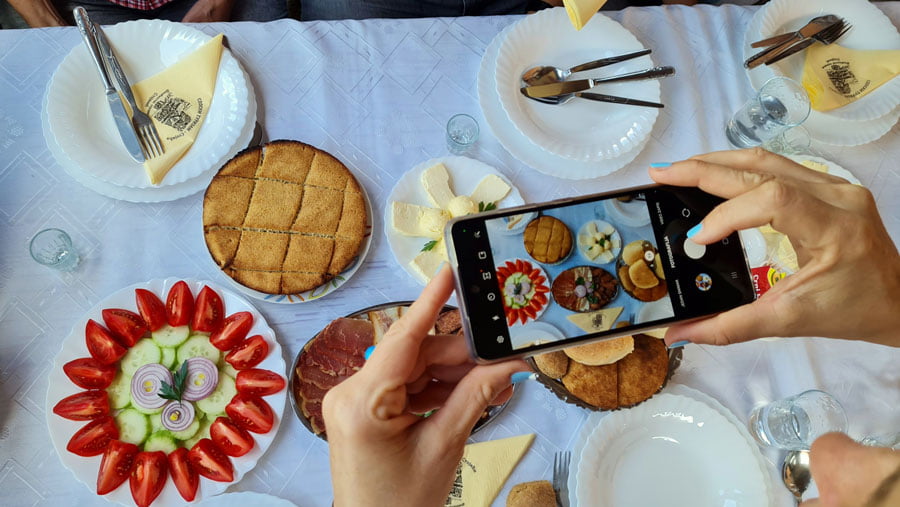 The last part of the day was spent at Stojanić’s household in Stojići village. Our host was kind to show us around the watermill that belongs to his family for more than a century and it’s still operational. There were so many details to see but the most impressive part was the homemade lunch with some of the best delicacies we tried in the area.

Driving back to Belgrade gave us time for summing up our impressions and – taking a nap.

You can download a free copy of the West Serbia brochure in English.

Please write a few words in a comment, and let me know what you think. 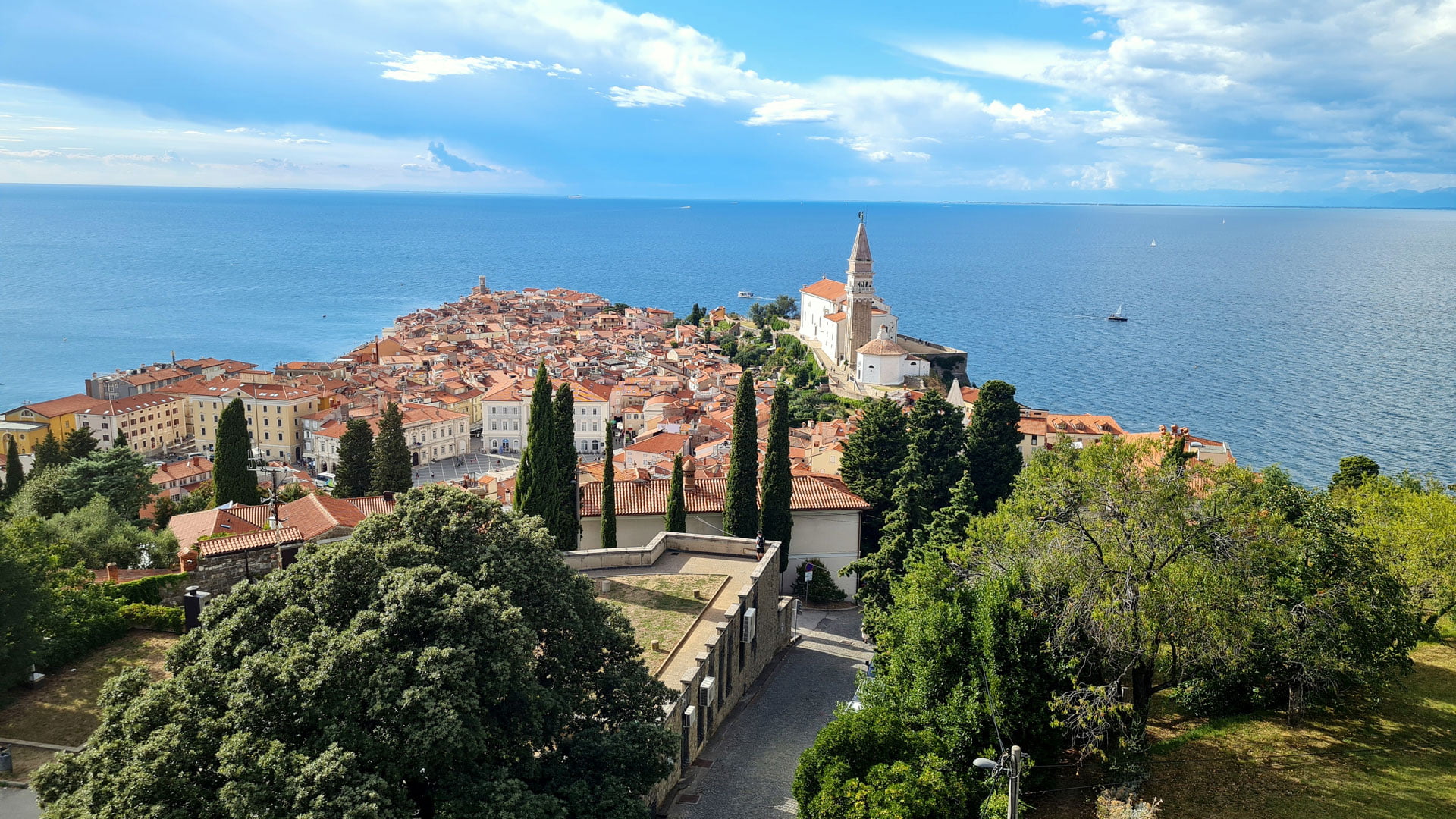