Although you have hours to go from the Antalya Riviera towards Cappadocia, there are fortunately few worthy stops along the way. It is not just a chance to stretch your legs, but the opportunity to see and learn so much. And now – entering the cradle of dervishes!

The anatolian landscape along the way

The town of Konya doesn’t look that appealing from the distance, but it embodies the famous Museum and the Mausoleum of Persian Sufi scholar Jalaluddin Rumi, founder of the whirling dervishes or the Mevlevi Order. You probably know about it by its specific way of prayer. Dressed in long robes with tall hats on their heads, they are able to whirl for hours and that is how they reach the religious ecstasy. Their ritual dance is called Sema.

Mevlevi Order was founded right here in Konya during the Seljuk Turks rule.

The famous dome of Mevlana Museum

Mevlana Rumi was the founder, but there is also a significant successor by the name of Divani Mehmet Chelebi. The Chelebists or “the kind ones” who went out into the world to spread the teaching, were the followers of the grandmaster.

A lot of monasteries or Semahanes of the Order were established all around the world under the influence of Mehmet Chelebi. There is one in Aleppo in Syria, also in Egypt and Algeria, on Greek islands Chios and Mytilene, as well as in the Turkish mainland. The famous Galata Mevlevihane in Istanbul was one of the religious objects erected in the later period.

Mevlevihane is kind of “a monastery” consisting of dervishes’ premises, the museum, and the prayer room. The ritual itself of Rumi’s followers is “the act of love and the drama of the faith”.

Arabic inscription above the entrance

It consists of precisely determined moves with whirling that increases from gentle and slow to dynamic and fast towards the state of religious trans. Music goes in accordance with turns, it changes its rhythm and speed, giving a hypnotic effect to those observing the ritual and helping dervishes to reach the state of ecstasy.

The Mevlevi Order belongs to the Sunni or Orthodox mainstream of Islam. Its doctrine did not develop into a revolutionary strategy. Though it was criticized for its heretical ideas, it actually did enjoy the respect of the officials. Some of the leaders who respected the Order were the Ottoman Sultan Mehmed the Conqueror who took over the city of Constantinople, then Sultan Selim III (who was also a member), while Suleyman the Magnificent has built Semahane in Konya as a gift from the court.

The essence of revolving

Rumi’s followers had a significant impact on developing Ottoman culture and their influence is to be seen in poetry, calligraphy, visual arts from 14th to the 20th century. The music, however, was the greatest achievement.

Cooling at the courtyard’s drinking fountain

Since Muslim dogma forbids the music, being “damaging to listeners and religion”, dervishes only use a Mevlud, a poem enchanted in honor of Mohammed the Prophet. They have integrated the music into their rituals and thus trying to reach “the notes of Heaven”. Being involved in the order also became a way to study arts, music, and dance.

Sema includes 12 musicians with traditional Turkish instruments and 12 dancers. According to the teaching, the essence of all beings – from their atoms to the planets in the Universe – is to revolve. Everything participates in this almighty revolving and therefore the Semazens, the ones who whirl, take part in it in their prayer. The ritual of Sema thus represents a spiritual journey, a self-transformation.

Dervishes’ clothes are full of symbolism – the tall hat representing the tombstone, and the wide white robe – a funeral shroud. So is the dance itself. At the beginning of Sema, dervishes are standing with their arms crossed only to be spread later forming a number One that symbolizes God.

Visitors in front of the gate

One of the typical positions is laying the right arm with the palm towards the sky, “ready to receive God’s mercy”, while the left-hand faces the ground, in a giving position. While whirling from right to left the dervish greets all the world’s existence repeating the name of God. Sema is the prayer that gradually, through seven layers, takes believers closer to their God.

The Museum in Konya still has that mystical atmosphere, even though the courtyard is full of tourists with colorful scarves and shoes’ gaiters which are obligatory for entering the premises. The Oriental surroundings allure from every corner of the building while you wait in line with all those curious visitors and master Mevlana admirers.

Next: IMAGINE A NIGHT IN CARAVANSERAI (5) 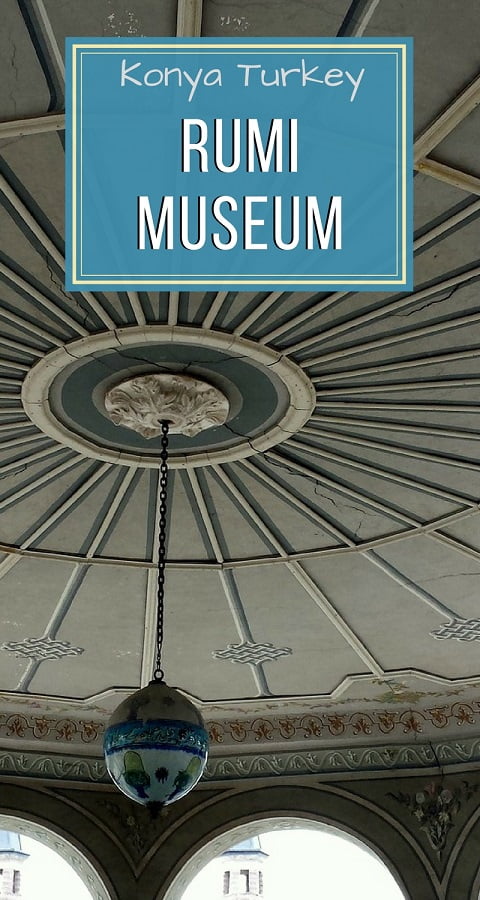 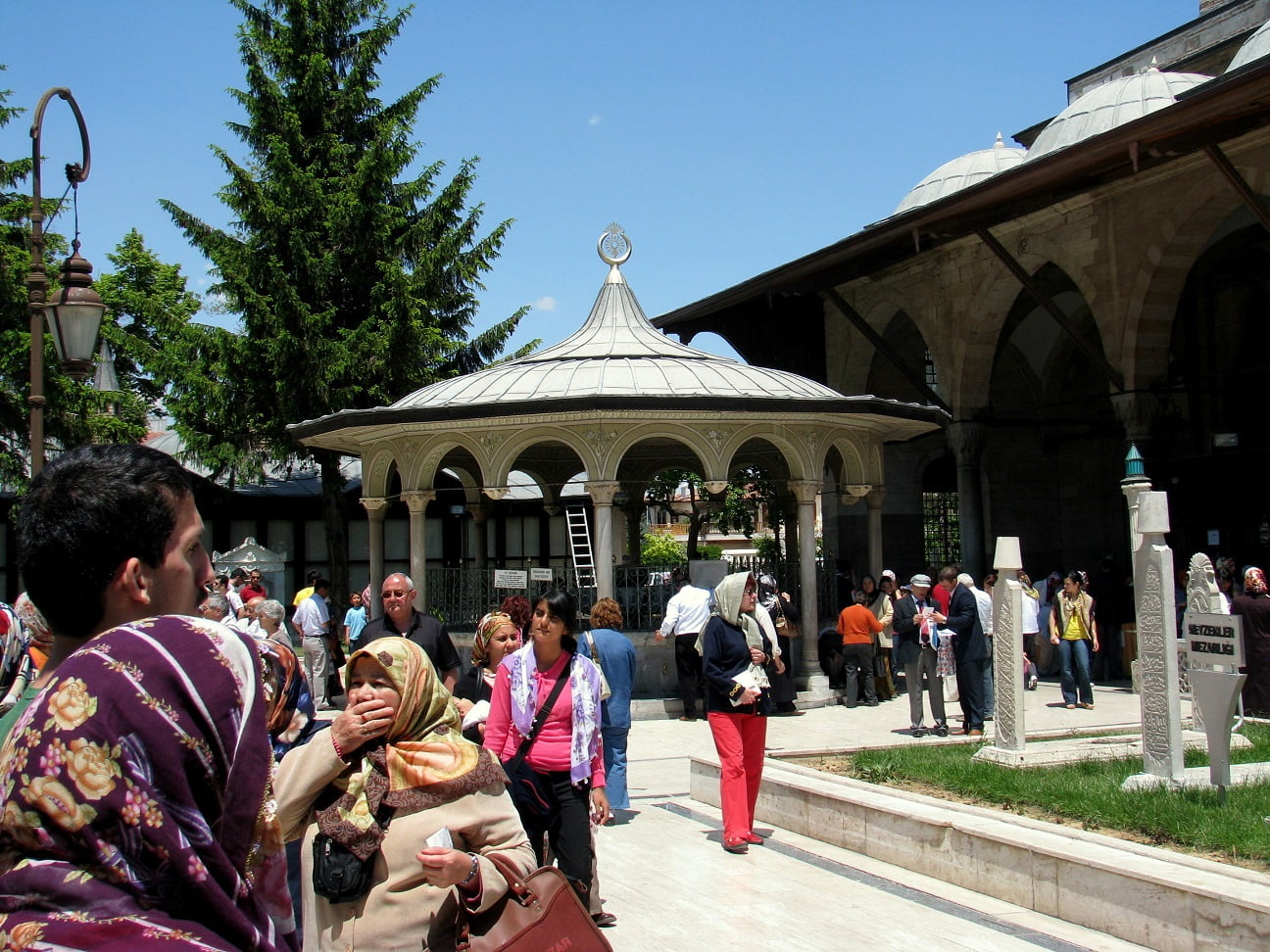 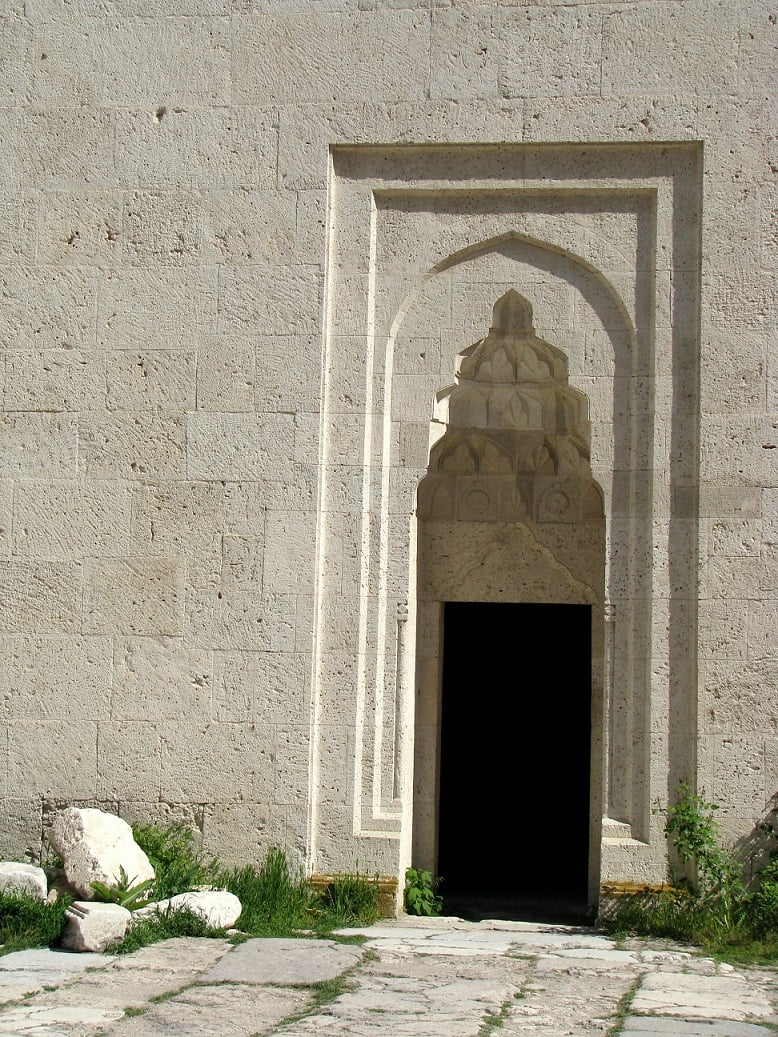