Here are the best Ionian Islands to visit, even though the list doesn’t include all the seven largest ones of the archipelago. These three Ionian islands – Kefalonia, Lefkada, and Ithaca, are just close to one another and easy to visit during a reasonable amount of time. Local tours and Ionian islands ferry routes often include hopping on and off between the three islands. 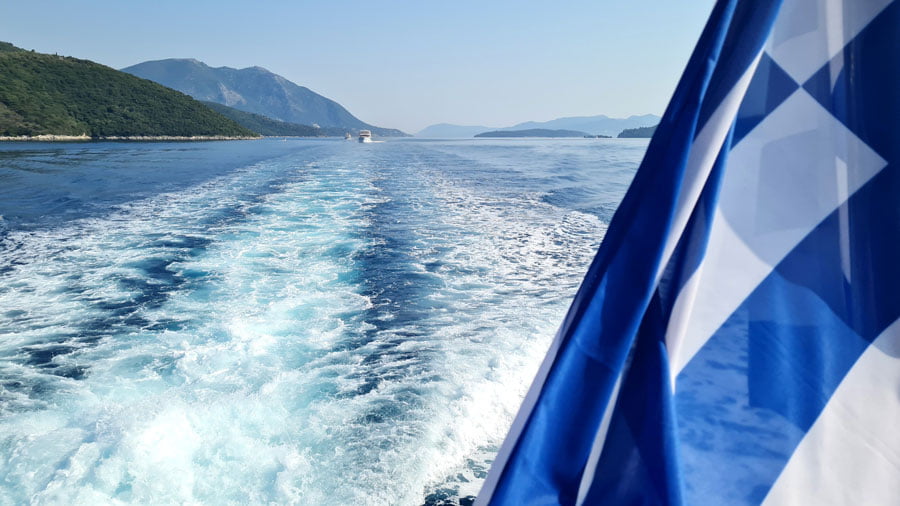 If you are concerned about the Covid-19 measures, Greece can be entered with the valid vaccination certificate or a PCR test. Since the government is trying to motivate its population to get vaccinated, you will probably hear about the new Covid measure every day, but they mostly refer to domestic people. For international tourists the situation seems pretty normal though. We are required to wear masks indoors, when embarking on ships, and one should be responsible and take care of one’s personal hygiene properly.

The Ionian Islands in Greece are among the most popular in the country, besides the Cyclades and Crete. (If you are interested in Rhodes island that belongs to the Dodecanese archipelago, there is an entire series on the blog.) Thanks to their geographical position, their story was historically and culturally connected to invaders from Italy and Britain compared to the rest of Greece where the strong Ottoman influence was inevitable. Venetian traces can still be seen in the local architecture, food, and tradition, given that Ionian islands were occupied by the Venetians in Medieval times. 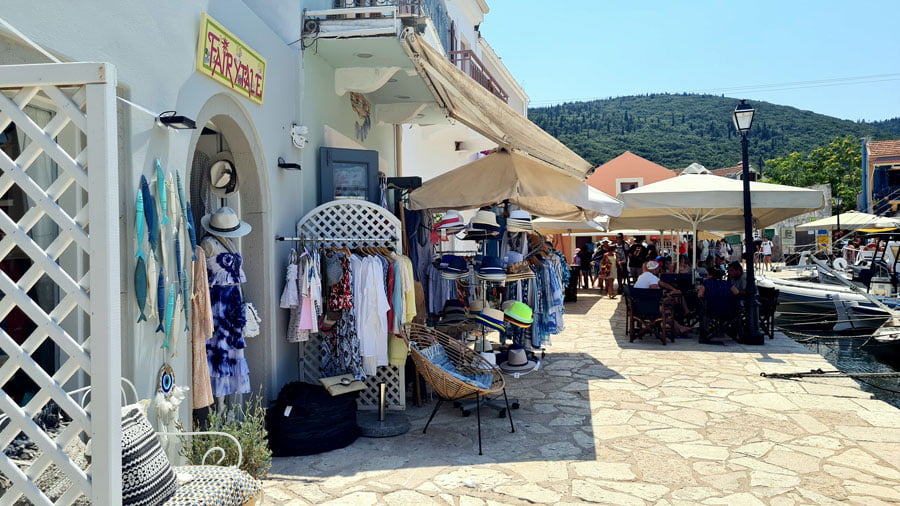 Almost 3,000 inhabited islands belong to Greece. That is the reason tourists often wonder what are the 7 Ionian Islands. They are also known as the Eptianissa (Eptanese), meaning ‘seven’ in Greek. So, the seven large Ionian Islands in Greece are Kefalonia, Lefkada, Ithaca, Zakynthos, Corfu, Paxos, and Kythira (in the southern part of Peloponnese), with many islets that are worth seeing which will be included in this ‘Best Ionian Islands to Visit’ or the blog posts to follow. 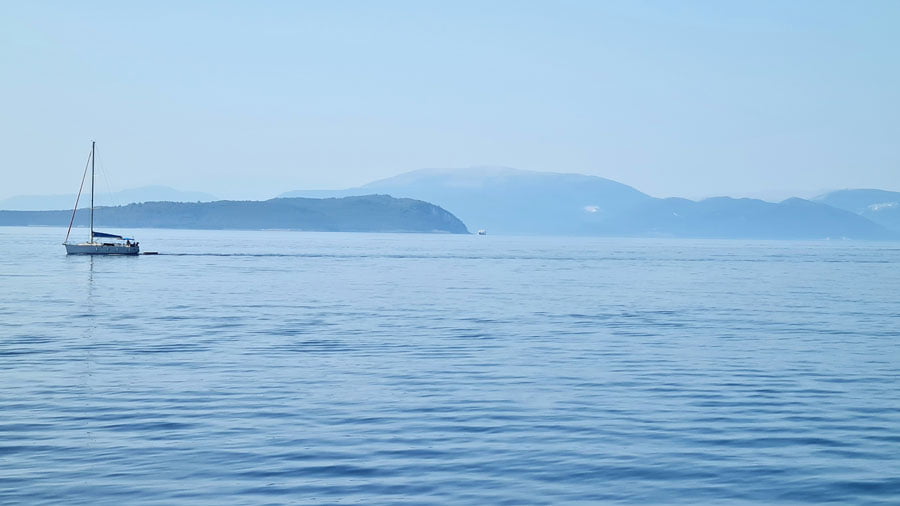 Ionian Islands in the mist

Things to do in Ionian Islands

So, this post will focus on things to do in the Ionian Islands, having in mind the Greek islands of Kefalonia, Lefkada, and Ithaca. Some of them are mostly praised for the surreal color of the sea and gorgeous beaches while others are often popular because of their lovely villages and mythology. 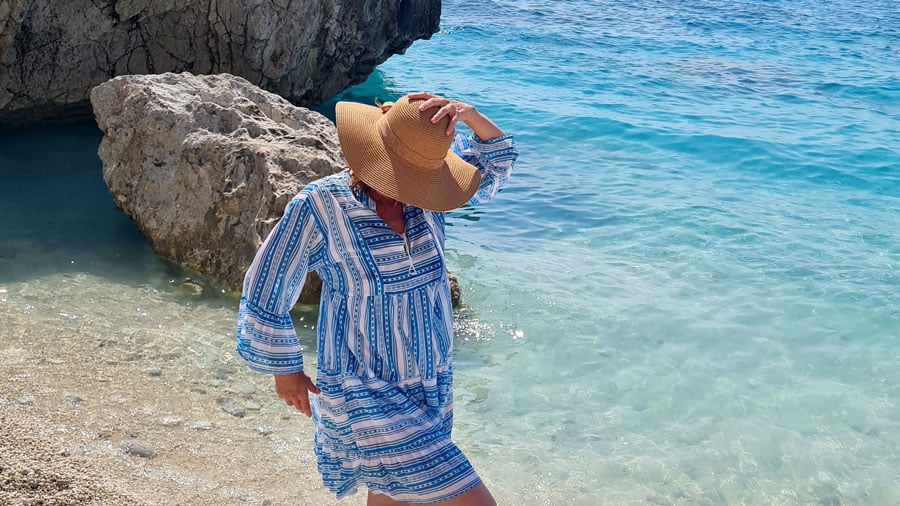 Things to do in Ionian islands – See the beaches

KEFALONIA WHAT TO SEE

As the biggest island in the Ionian Sea, Kefalonia is a genuine representative of the Eptanese archipelago. With lavish greenery and stunning cliffs, the island served as a filming location for Captain Corelli’s Mandolin movie. Besides lovely beaches, the island is famous for its picturesque fishing villages and underground caves. 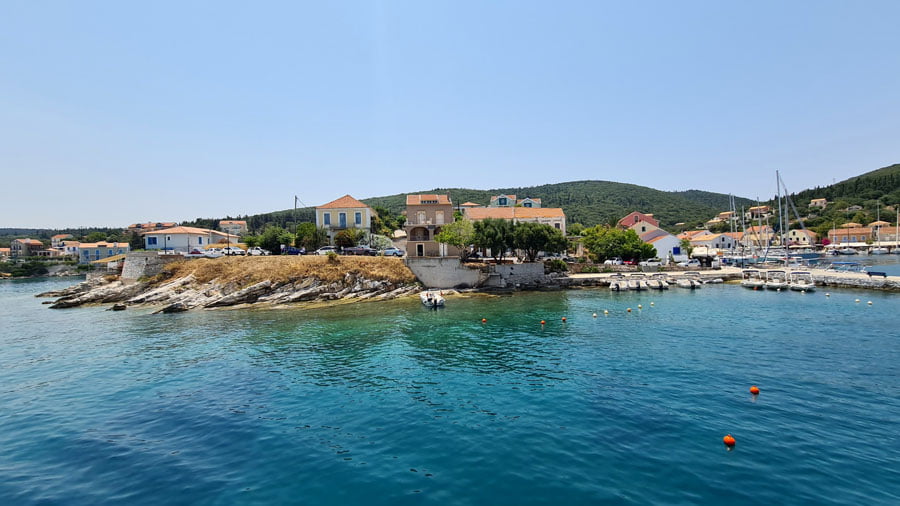 If you are into beaches, make sure to stop by Myrtos, Antisamos, Lourdas, or Skala, but take time also to enjoy Kefalonia’s dramatic landscapes and charming architecture in villages such as Fiscardo, Argostoli, Sami, Assos. They say that Kefalonia was home to 365 villages before the devastating earthquake in 1953 occurred, after which most of them were deserted. 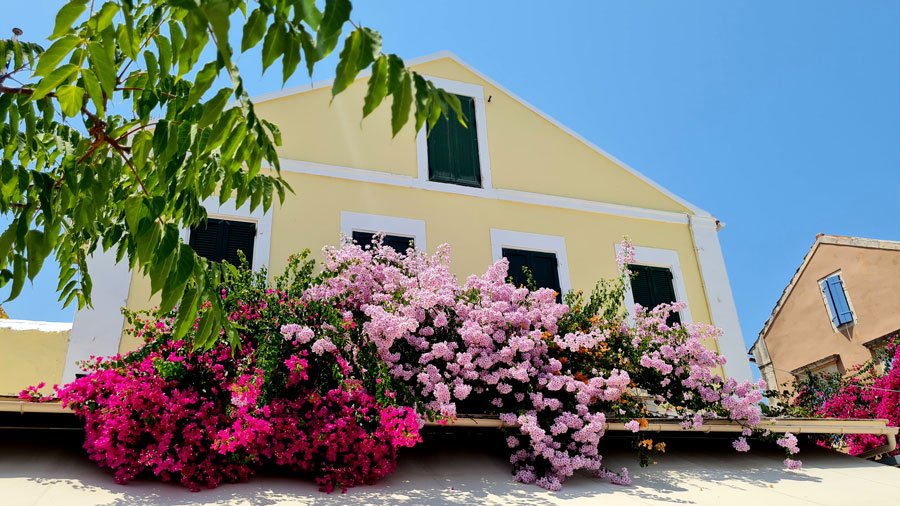 The capital of Argostoli is a small town of 14,000 inhabitants. It stands on the far end of the natural bay encircled by mountains and forests. Even though most of the Venetian buildings were destroyed by the earthquake, the style can still be adored in some of the smaller places. Still, the Archeological Museum of Kefalonia visit should be mentioned as one of the things to do in Ionian Islands, given that it houses archeological findings from the Mycenaean, Hellenistic, and the Roman period. 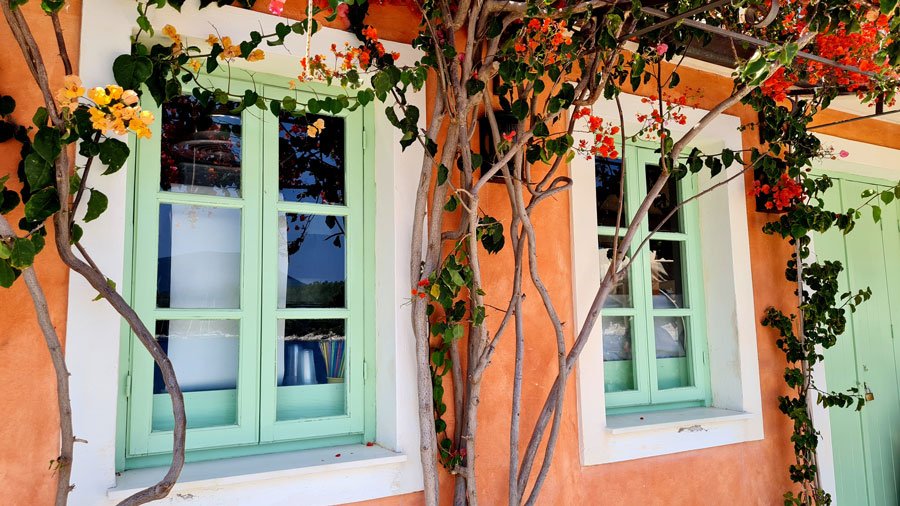 When it comes to what to see in Kefalonia, the charming village of Fiscardo should definitely be on your bucket list. A small harbor full of traditional boats and yachts, shops, restaurants, houses painted in pastel colors are the things to admire while you sit at a tavern, taste local dishes, and look at passers-by. 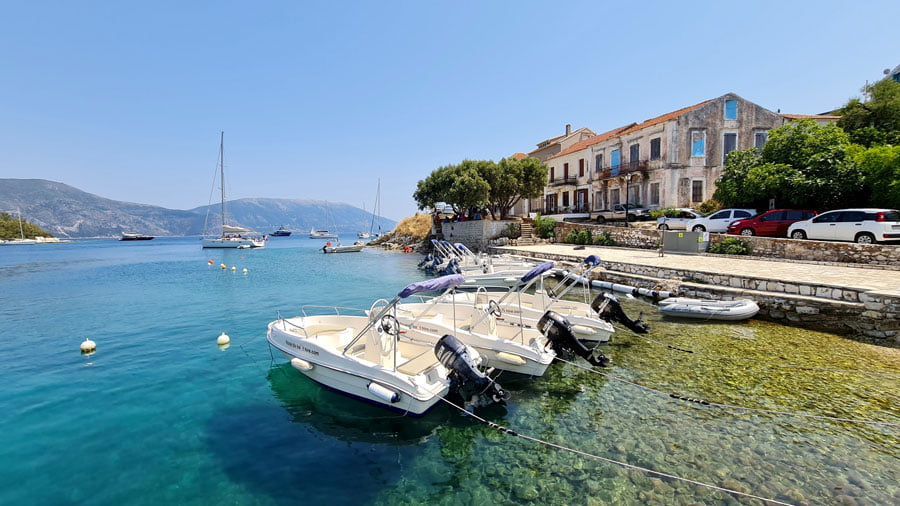 Fiscardo village is situated about 50 km north of Argostoli. It is focused around the waterfront and its small harbor. Given that a lot of settlements in the Ionian Sea were destroyed by the earthquake, one appreciates Fiscardo even more since it’s one of the few villages that remained untouched. So, the whole scale of lovely facades is just as it was for a long time. 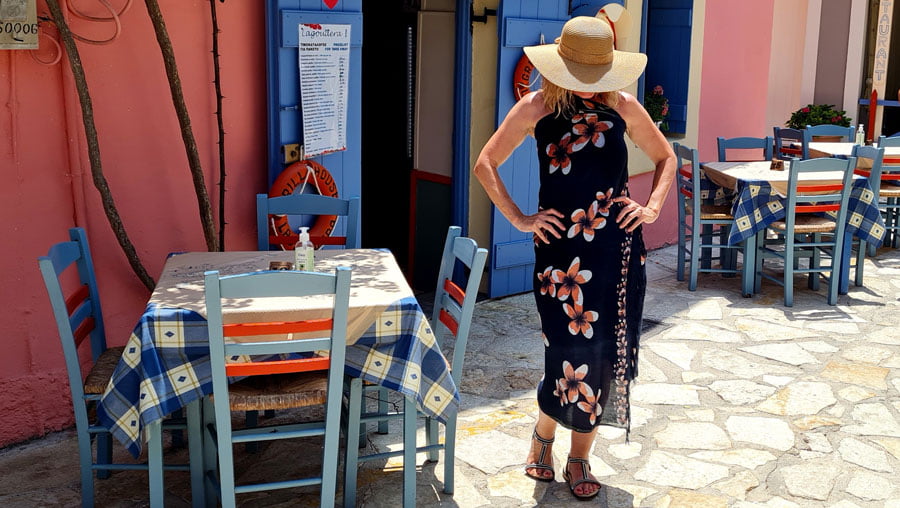 The coastal front is full of shops and tavernas. It’s a bit more expensive than other Ionian islands, but one just has to buy at least a souvenir. If you are coming to visit from other parts of Kefalonia or the nearby islands, the best option is to have lunch in one of the local tavernas with a view of the charming harbor. Leave some room for the famous ice cream at Dodoni’s or delicious cake at the Melina Patisserie. 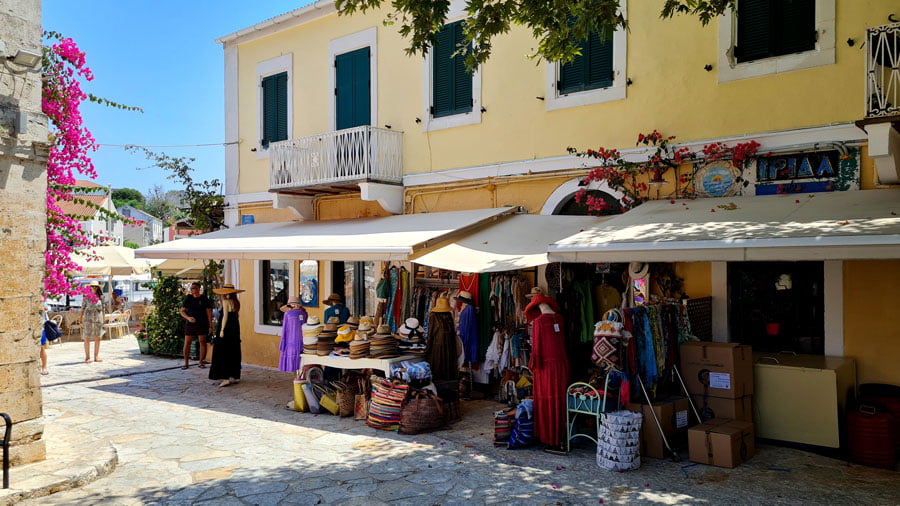 Whether coming by car or boat, it is possible to enjoy lovely pebbled beaches and coves that can be found relatively close to Fiscardo. If you have more time, Kefalonia will also satisfy your interest in history and tradition since there are also Paleolithic settlements and Byzantine churches that can be visited. 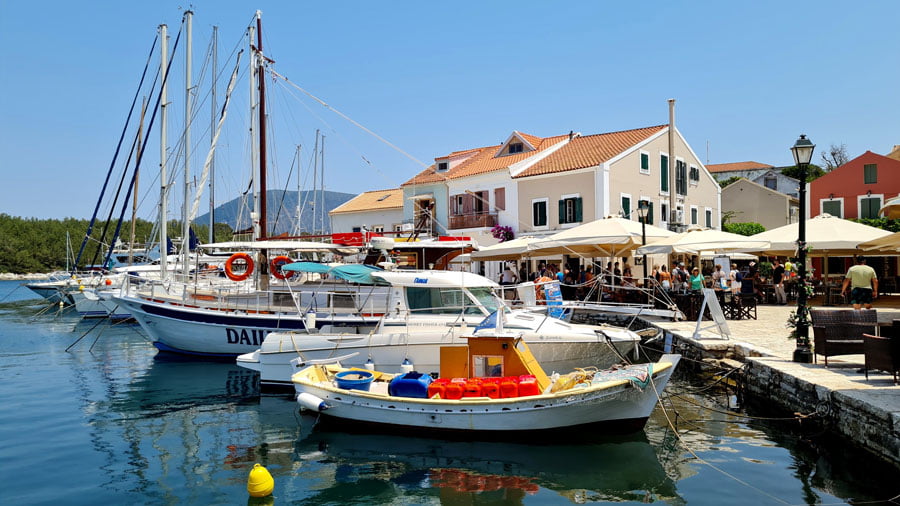 IS LEFKADA WORTH VISITING

When talking about the best Ionian Islands to visit, one just can’t afford to skip Lefkada. So, if you are wondering whether Lefkada is worth visiting, just keep on reading since this island is often referred to as the Caribbean of Greece – deservedly.
The island is located in the heart of the Ionian Sea, connected with the mainland by a small bridge. It’s popular for its beautiful natural landscapes and breathtaking beaches. 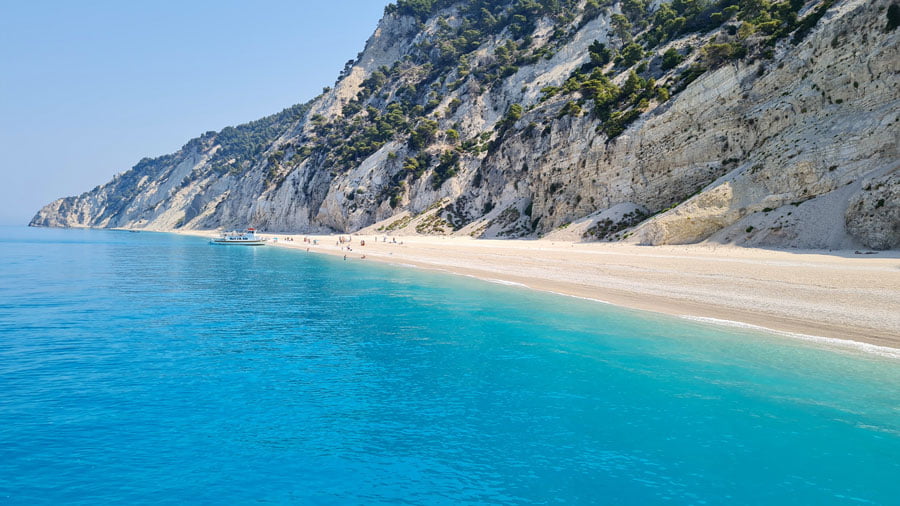 When coming to the island, you will be welcomed by the old fortress at the entrance of Lefkada Town. The Agia Mavra Castle was built in 1300 by the Venetian leader Giovanni Orsini who received the island as a dowry and began fortifying it with seven bastions. There is the church of Agia Mavra inside the castle dedicated to the patron saint of Lefkada. 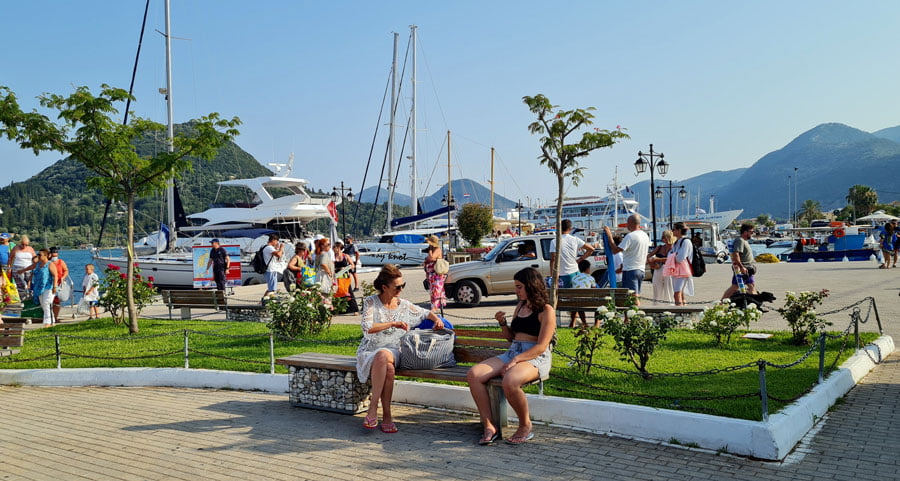 The small capital will immerse you into its narrow alleys and traditional tavernas. Other places to put on your itinerary here are seaside villages, such as Nidri and Agios Nikitas. Nidri is the most popular tourist resort that lies 17 km south of Lefkada Town, even though its population is about 800. This village has one of the busiest ports on the island with ferry connections to the neighboring Kefalonia, Ithaca, and Meganisi. 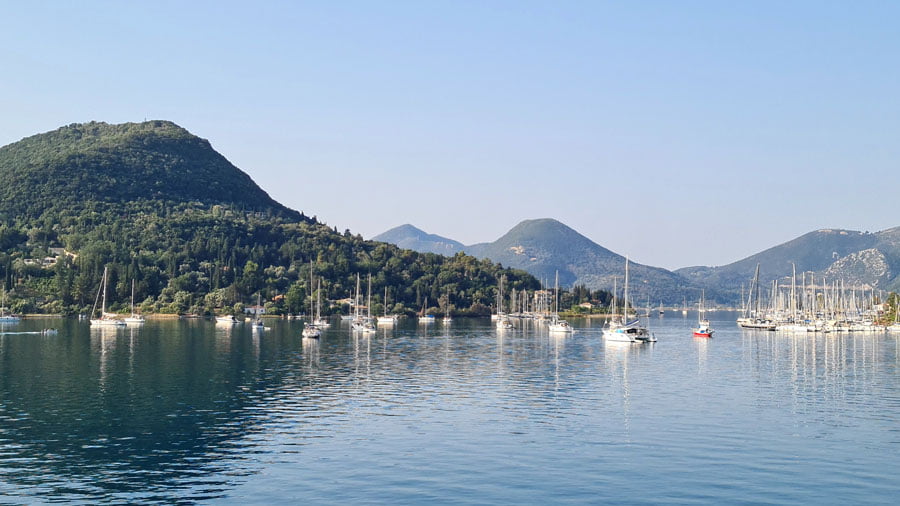 There is another interesting thing to see in Lefkada. That would be the Lighthouse located in Cape Ducato on the south of the island. It was erected in 1913. Even though it’s pretty hard to reach, given that you will have to drive slowly for 16 km along the unpaved road, the Lighthouse is quite picturesque when seen from the boat. 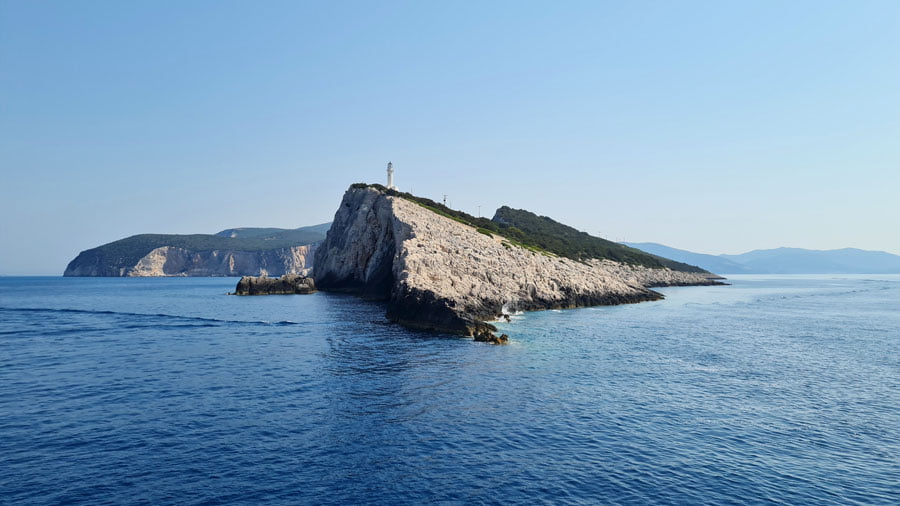 The Lighthouse in the south

The main reason why the island is extremely popular is Lefkada’s beaches. They can be sandy or pebbled with such mesmerizing sea color that you will be stunned. They say that ‘lefkos’ in Greek means white and Lefkada is full of white cliffs and wild greenery that are to blame for those turquoise waters. The most popular beaches are Porto Katsiki, Egremni, Milos, and Kathisma beach, while Agios Ioannis and Vassiliki are the best windsurfing spots. 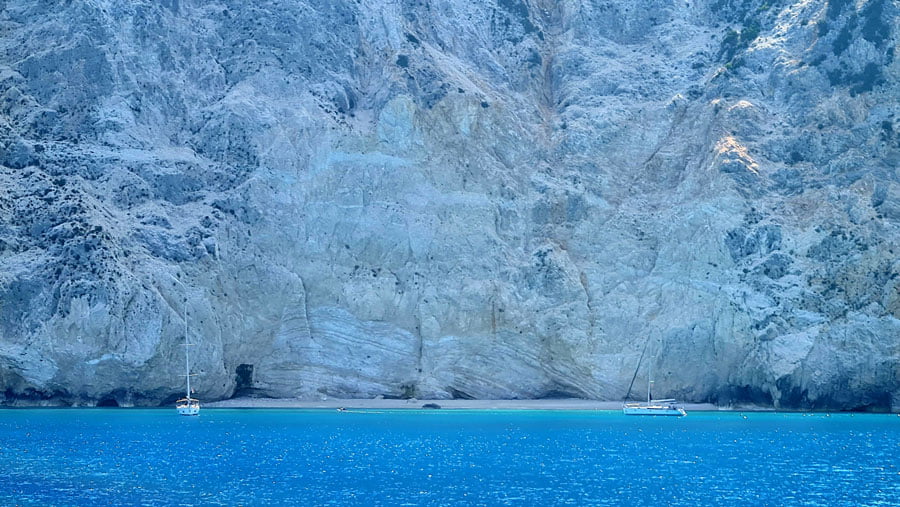 Porto Katsiki Lefkada is one of the most photographed attractions of the island. It is considered to be one of the best beaches in Greece and in the Mediterranean. You will find it 44 km southwest of the capital town and it will take an hour and a half drive to get you there. A car parking can be found on top of the stairs that will take you down to the beach. 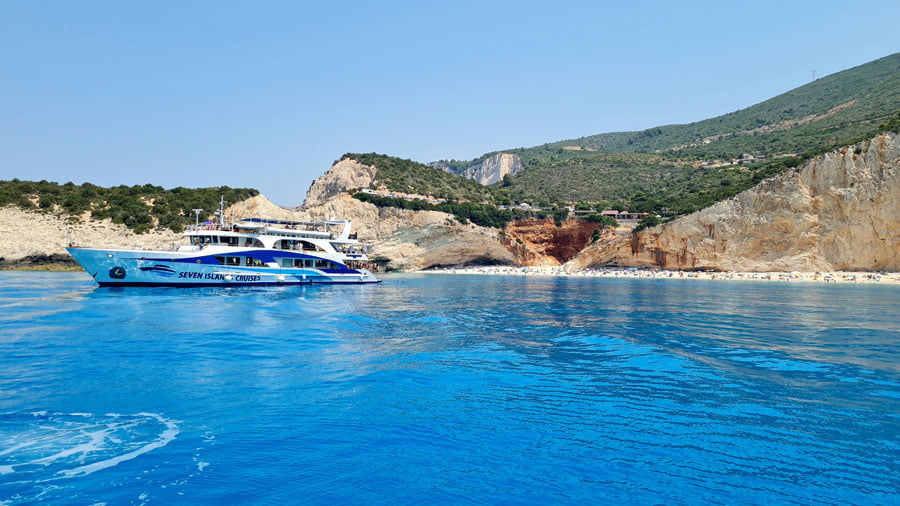 Don’t be surprised if you encounter a lot of private yachts and cruising tours in the cove since this is one of those places that makes Lefkada one of the best Ionian Islands to visit. Have in mind that you can also come by a taxi-boat from Nidri and Vassiliki. 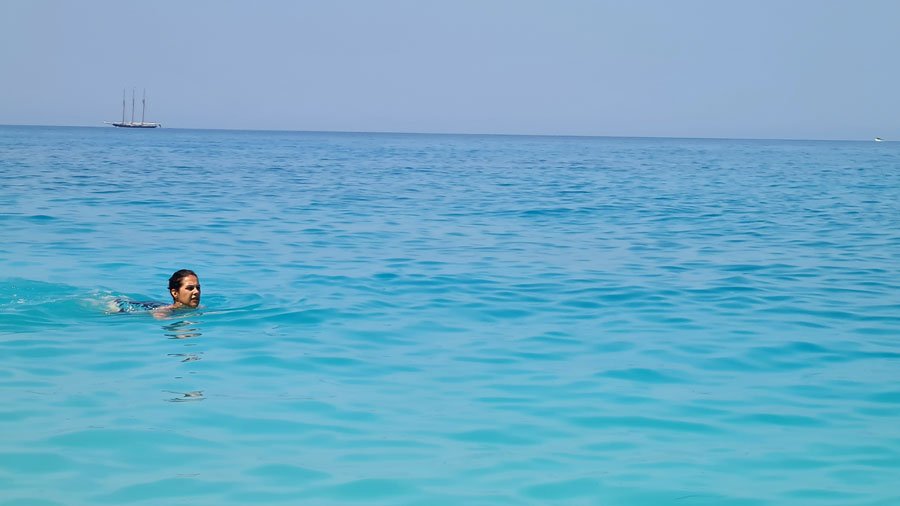 If you are coming by boat, make sure to stop by another small beach that is only accessible by the sea. Welcome to the beach of Egremni Lefkada. 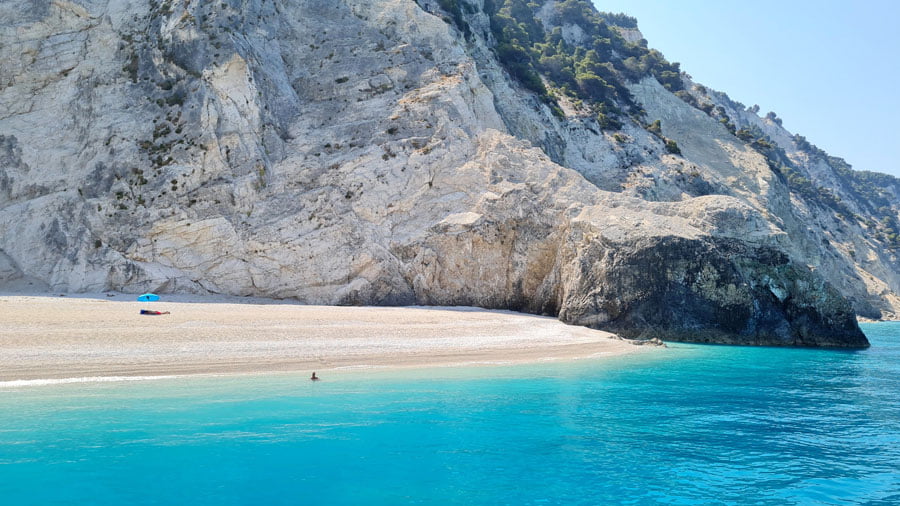 It is situated 38 km from Lefkada Town and it is surrounded by impressive barren cliffs that give a special feel to the landscape. Egrmeni’s bright pebbles and crystal-clear waters make an exotic setting that allures numerous visitors. The beach can get overcrowded if you come at the same time as cruising boats packed with tourists. 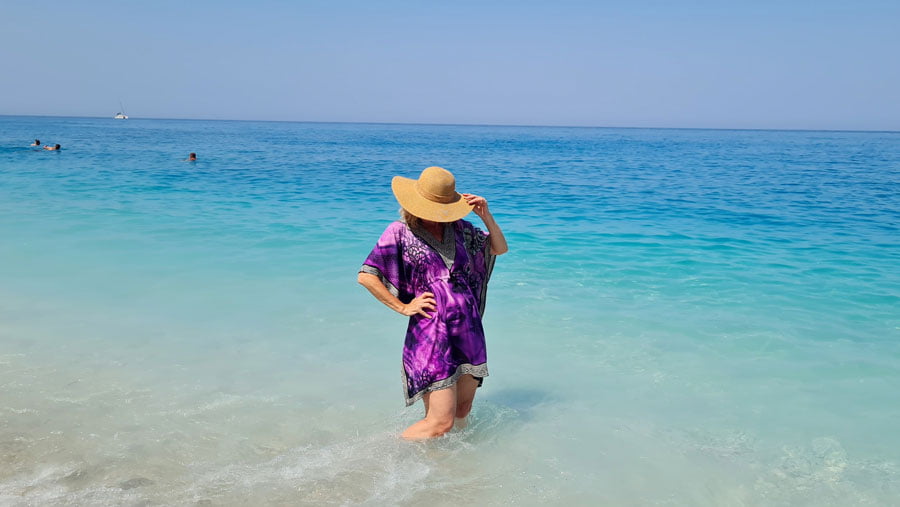 Is Lefkada worth visiting? Well, just look at the colors.

THINGS TO SEE IN ITHACA GREECE

If you are wondering about things to see in Ithaca Greece and why this is one of the best Ionian Islands to visit, just remember that among all those lavish landscapes in the middle of the sea there lies an island that was mentioned in Homer’s epic poem Odysseus (or Ulysses). Apart from its mythical essence, the island is adorned by emerald waters and picturesque villages. 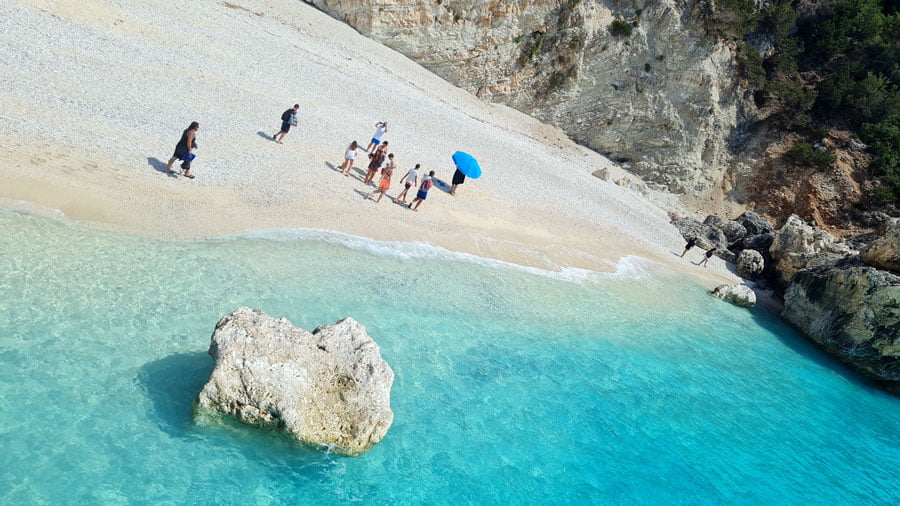 Home to the legendary hero Odysseus, this small island has its portion of crystal-clear waters and sandy coves. The capital is the village of Vathy which has also been the main Ithaca harbor since the 16th century. Even though it’s tiny, the island provides nice sightseeing spots. One of the popular ones is the Monastery of Panagia Kathariotissa on the top of the mountain with a breathtaking view of the Ionian Sea. If you are here for the beaches, make sure to stop by Sarakiniko, Filiatro, Gidaki, or the Afales bay. 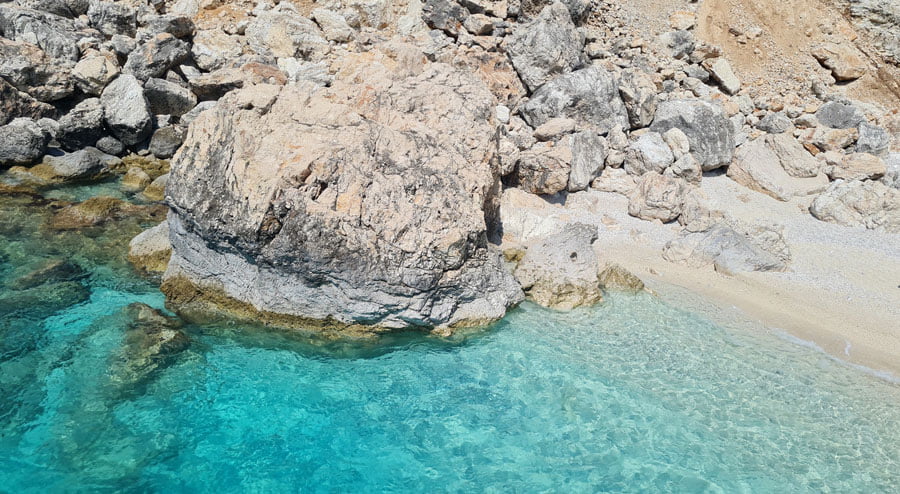 Afales is the large bay to the north of the island with many pebbled and one sandy beach. The latter one is Platia Ammos and it’s only accessible by boat which is easy to hire in Vathy. This is the most exotic and the only sandy beach on Ithaca. 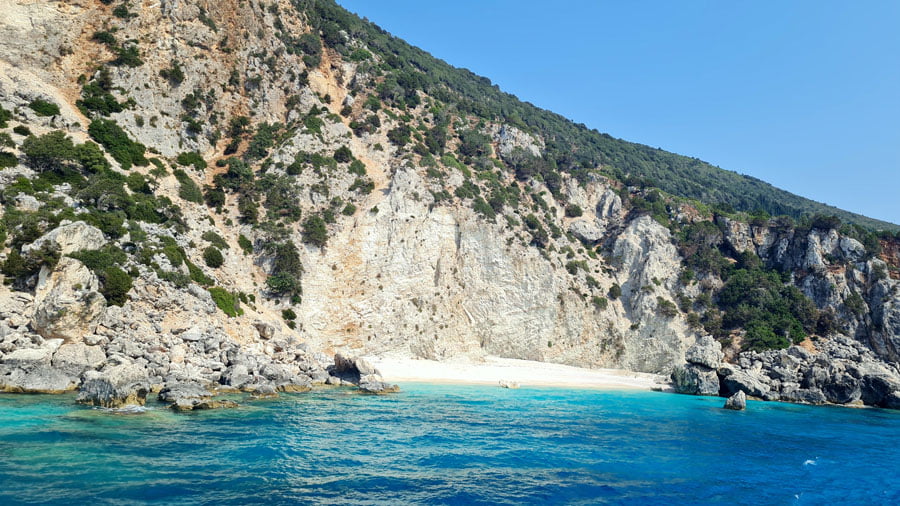 Since this bay is quite popular among tourists, expect to see a lot of cruise boats packed with visitors. Peak months in the season for all the Ionian islands Greece are July and August. Tourists will spend less than an hour here, so the beach can still be all yours if you are patient enough. I was surprised how barren those cliffs of the island seem, remembering that I read somewhere that Odysseus’s homeland was also desolated. 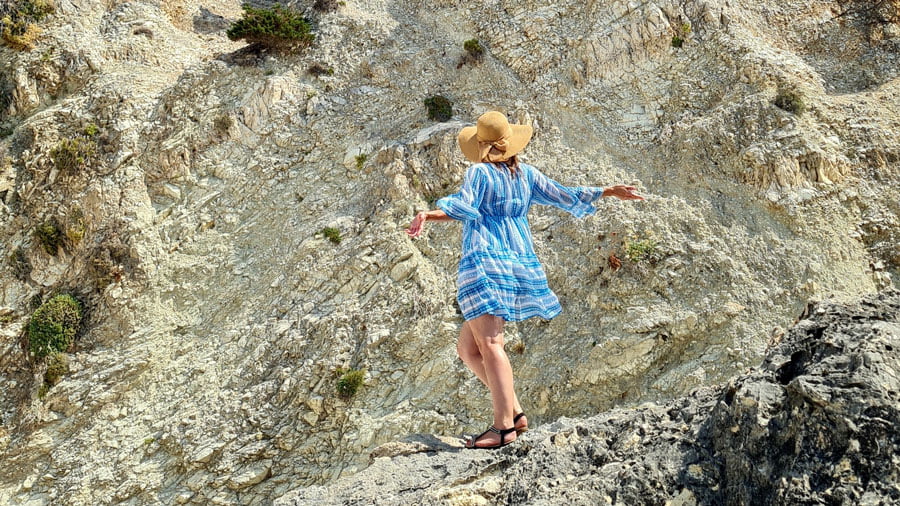 Even though there is no confirmed evidence that the island is really Odysseus’ kingdom, I couldn’t help but think that I may be stepping on the same soil as the great Homer’s hero, the king of Ithaca once did. There are some findings that are yet to be explored, the complex near Stavros village with some features that date back to the 8th century BC, roughly the period of the Odysseus’ rule. Still, it’s not that easy to find the excavation site without a guide, especially in the summer heat. The Archeological Collection of Stavros might be a good idea if you don’t have enough time given that it houses the piece of the Hellenistic mask from the 2nd century BC that reads Pray to Odysseus. This shows that he was worshiped as a hero or deity on Ithaca back then.

It makes you wonder, right!

Next: METEORA GREECE, THINGS TO SEE 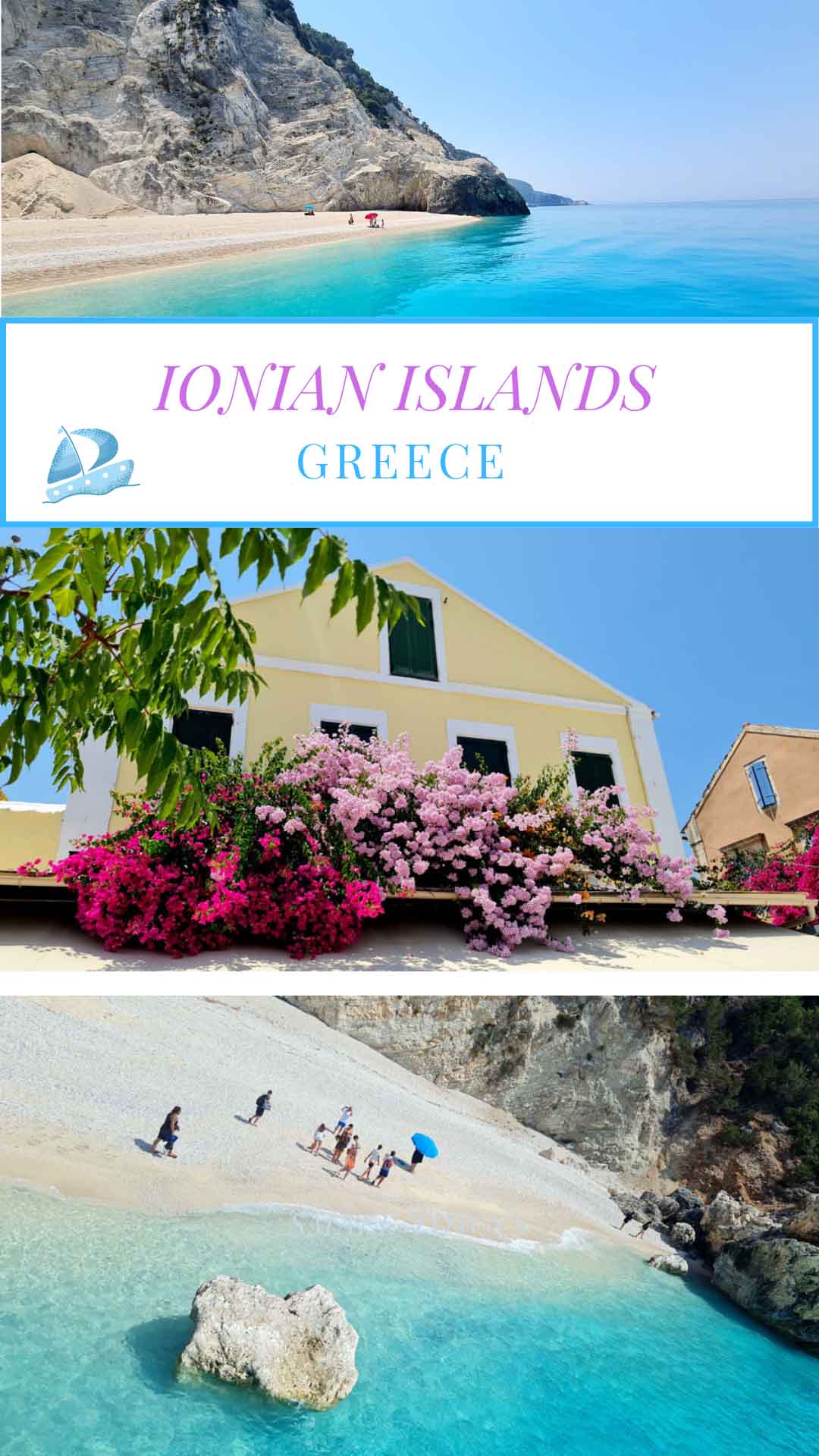 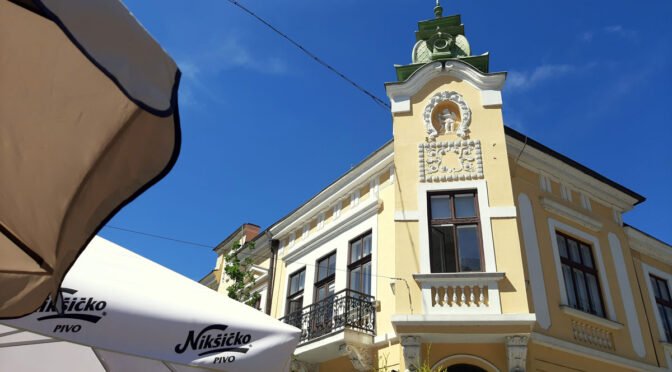 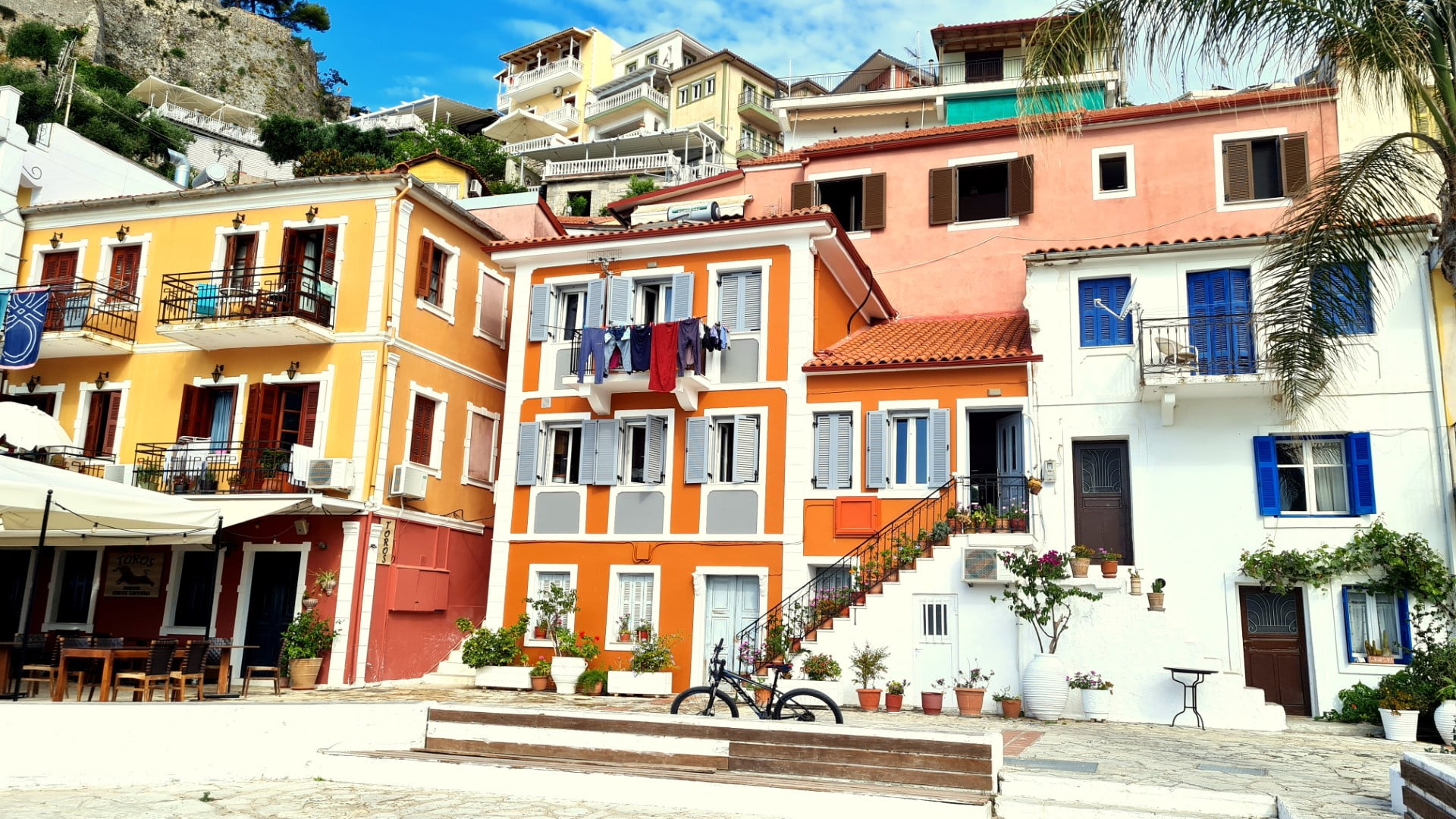