The time has come for another trip and another West Serbia Tourist Attractions post. This time though, we visited three locations – Užice, Zlatibor, Prijepolje, and all those points of interest these places have to offer. The group that went around west Serbia previously stayed the same (more about our last journey is to be found in West Serbia Places to Visit) and we met with friends from local tourism organizations who showed us around. 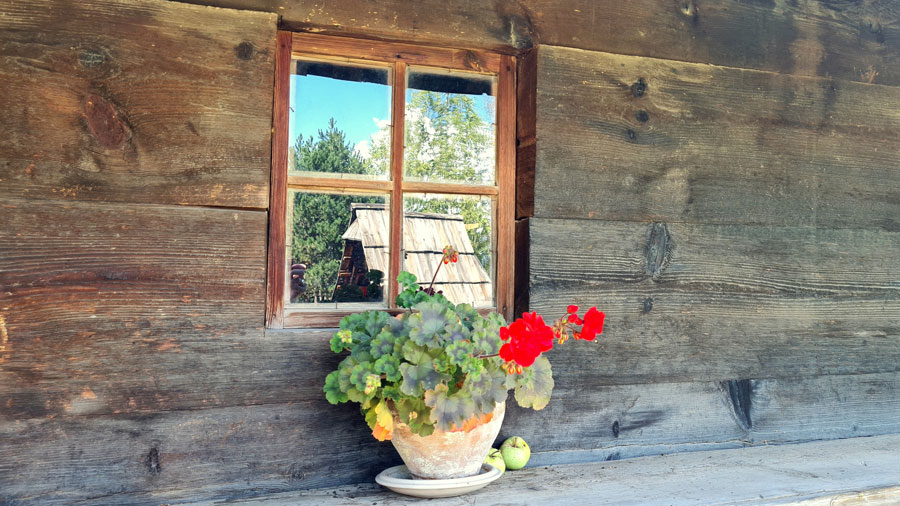 The plan was to depart early in the morning. We were supposed to spend a few days in those three locations. While we were preparing for our trip, we couldn’t but start worrying about the gloomy weather forecast. Showers, clouds, thunderstorms, and fog – the only thing that they didn’t mention was the snow! 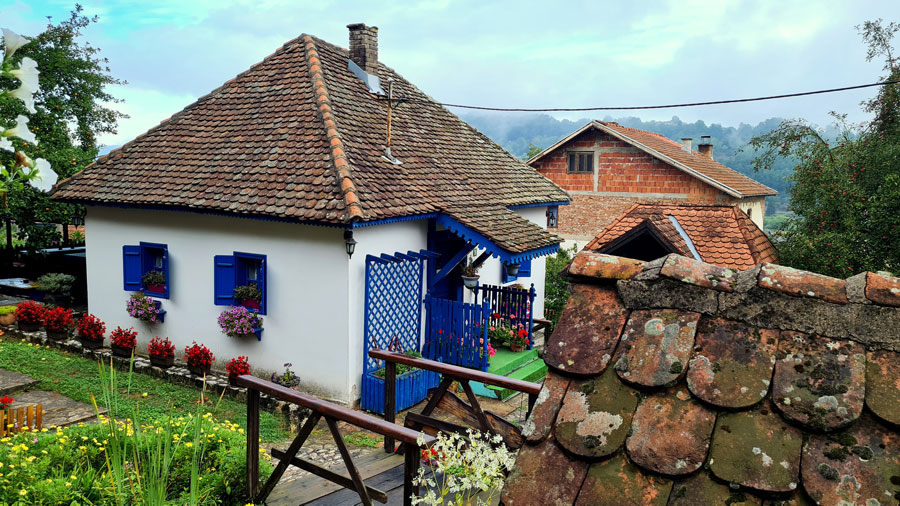 A hundred-year-old traditional house in Zlakusa

But we couldn’t do anything about it. When we took off from Belgrade at 6 am, it was still dark. And it did rain but as we were approaching Ovčar Banja, the sky started to clear. (“This might just work out fine”, we whispered.) 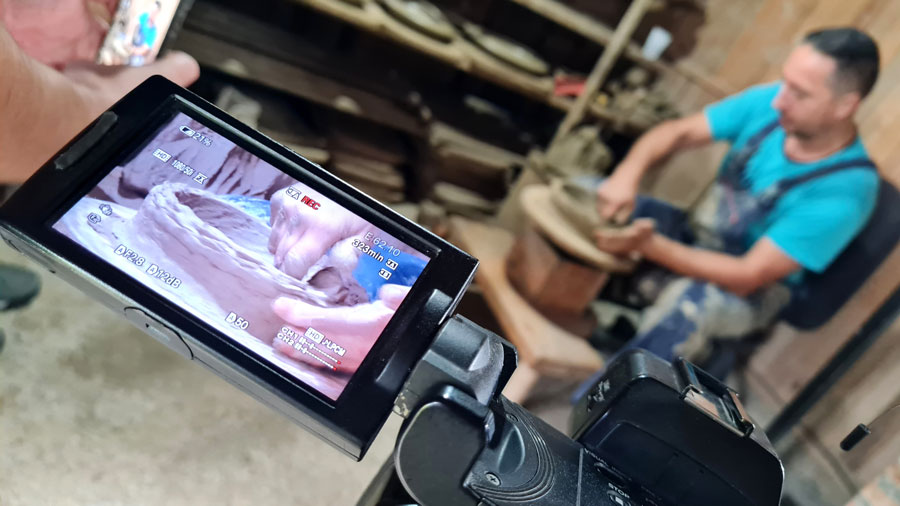 Zlakusa is renowned for pottery making

Our first stop was Zlakusa village and the local Household of Terzića Avlija. The traditional bun (komplet-lepinja) was waiting for us here, along with shots of rakija. We stumbled around the courtyard trying to take pictures of the colorful scenery. When we freshened up, all those 700 steps of the nearby Potpeć Cave were to be conquered. (They say that locals used to have these buns for breakfast before spending a day working in the field! Or as Eks said, “take this for breakfast, and you don’t have to eat anything else until tomorrow”.) 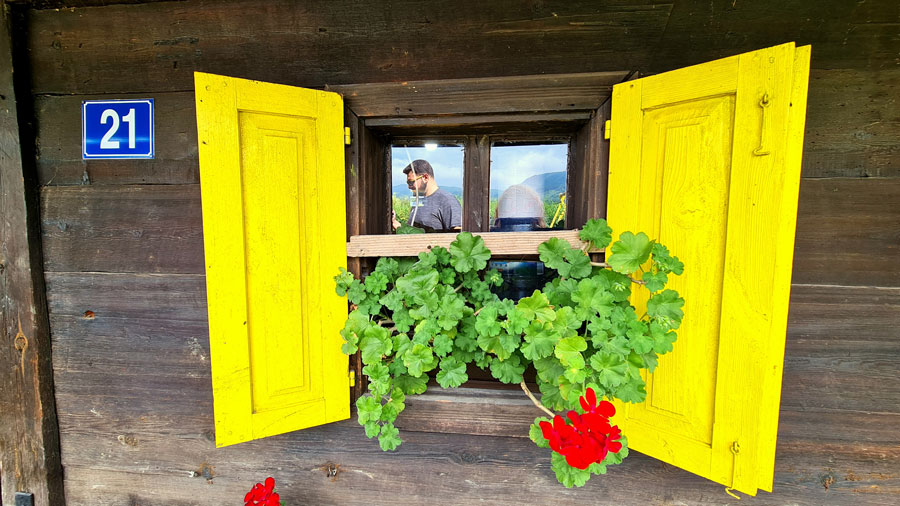 For those of us who wouldn’t mind burning some more breakfast calories, the Užice zip line was not that far away. It’s located next to the Old Town above the city. The ride might not be the longest or the highest but the surroundings are among the best I have seen with a great view of the 14th-century fortress! Another advantage is that one can choose whether to take a ride “standing up” or in a “Superman pose”. 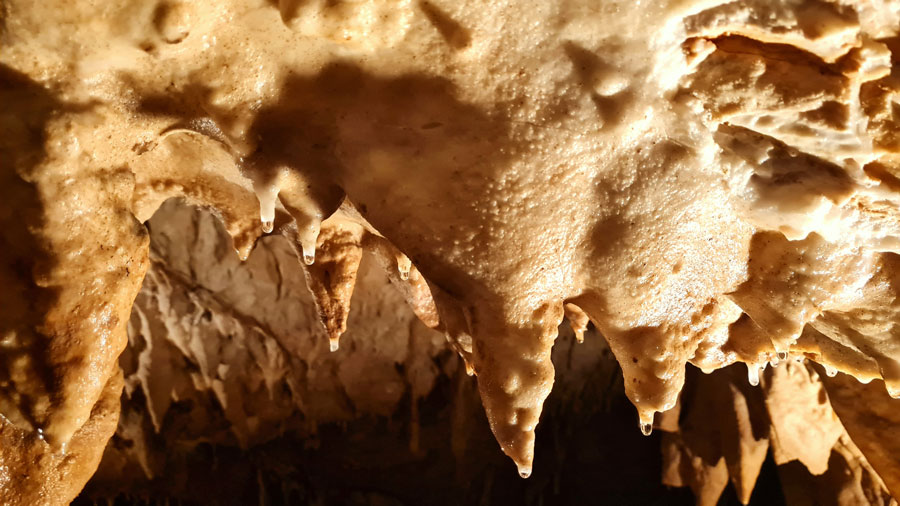 Stalactites in the cave

Although most of us said we are going to skip zip lining, once we got there the atmosphere was contagious. Not only that some of us conquered the fear of heights while others shouted “Let’s go, Serbia!”, but almost all of us went for a ride – multiple times. 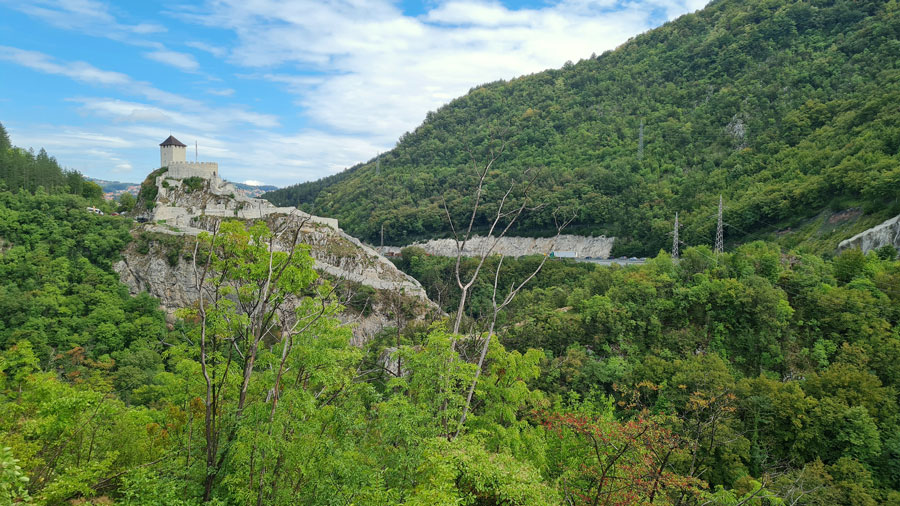 A view of the fortress from the zip line

I took three! The first time was to try it out (and survive), the second to bring my phone and make a clip, and the third was reserved for Superman. (Well, they said it was a pity to skip it.) We even joked around and said goodbye “officially” to all our followers before taking a slide. 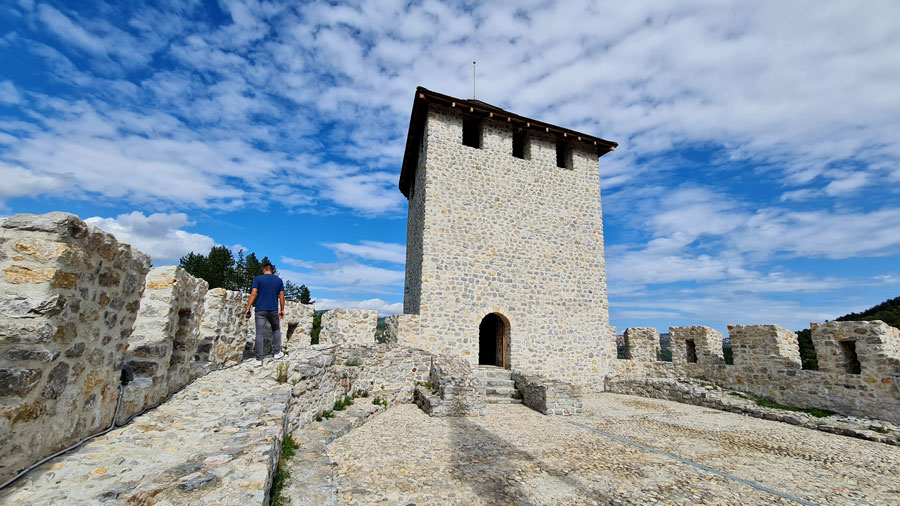 The Užice Fortress is always an inspiration. (What to see in Užice) It is partly restored and so, it’s easy to picture what this medieval structure once looked like. Next to the city, another one of the West Serbia tourist attractions awaits. It’s the Neolithic Village Stapark with faithfully depicted inhabitants of the New Stone Age. (I had to take a picture of Vlada next to one of them. We joked that after 7,000 years, “nothing has changed”.) 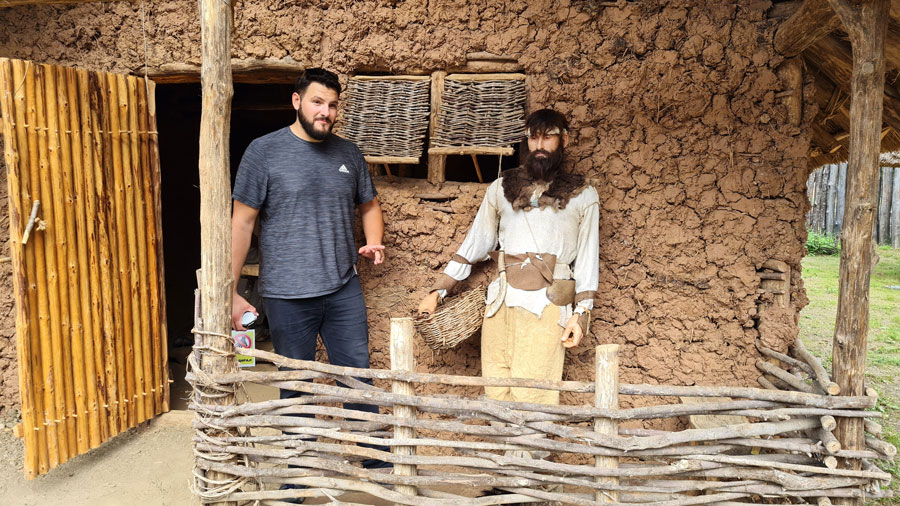 Another plentiful Serbian meal (as it always is in West Serbia) and we had to skip dinner in Zlatibor where we went next. (Let me just say – not only that it didn’t rain, but it was bright and sunny for most of the day. Our jackets and umbrellas stayed unpacked in the vehicle.) 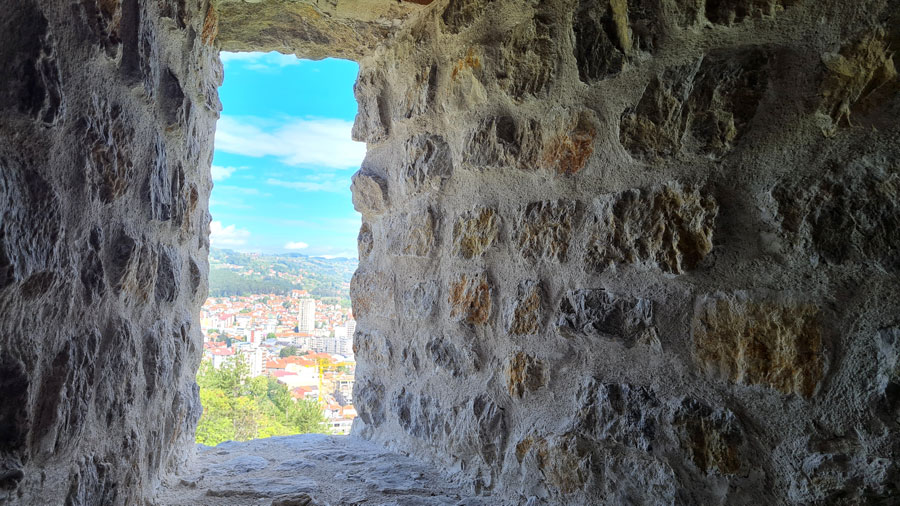 City panorama from the fort’s window

Spending a night in Zlatibor was chilly followed by fog and humidity the next morning. We began to worry that our hopes were up too soon regarding the “wrong” forecast. But even though it was cloudy during our morning walk, on the way to Stopića Cave the clouds disappeared leaving us with perfect weather for our open-air museum visit in Sirogojno. It couldn’t be better! 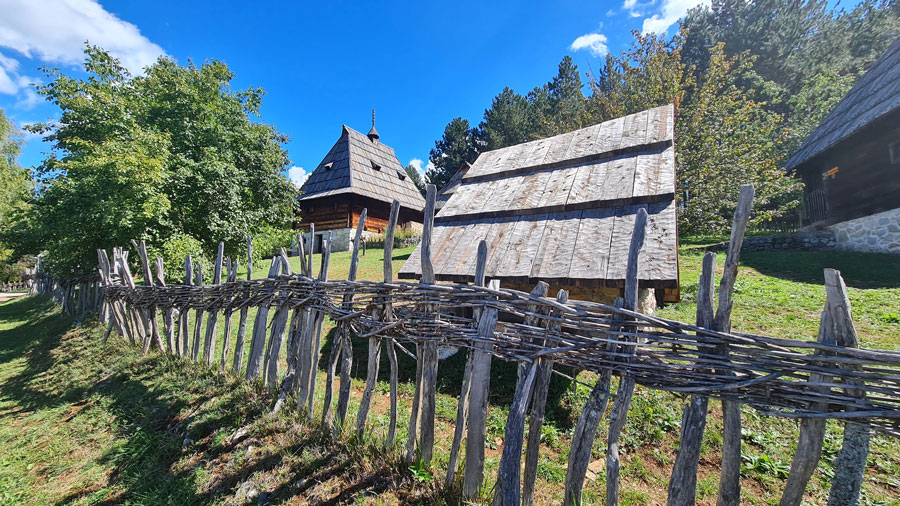 Zlatibor is one of the most popular places in Serbia and it has to be on your West Serbia Tourist Attractions list. (Find out more about the mountain in the Things to do in Zlatibor separate post.) We couldn’t see everything this time, but there were things we just couldn’t miss. 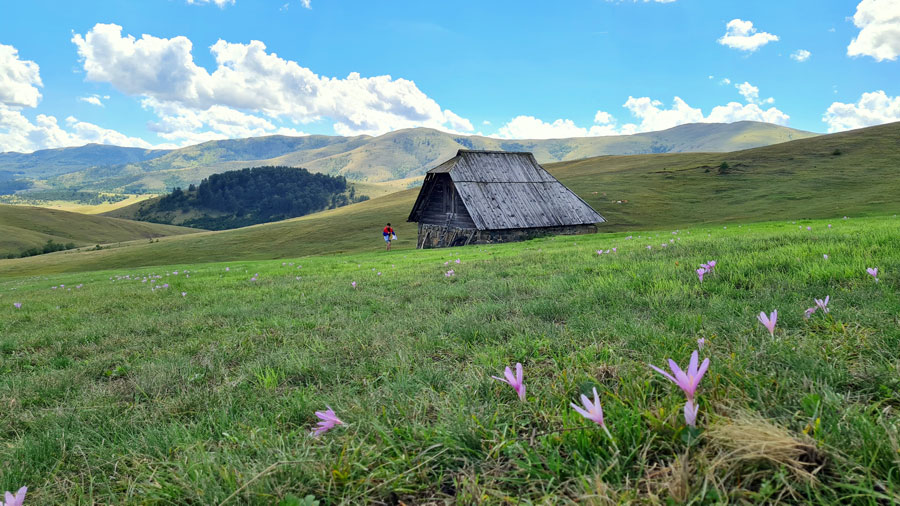 A view of Zlatibor hills from Rudine village

Besides Sirogojno and the Knitting Museum, a new location became a must-see. The one that will take you for a 9km-ride to Tornik! 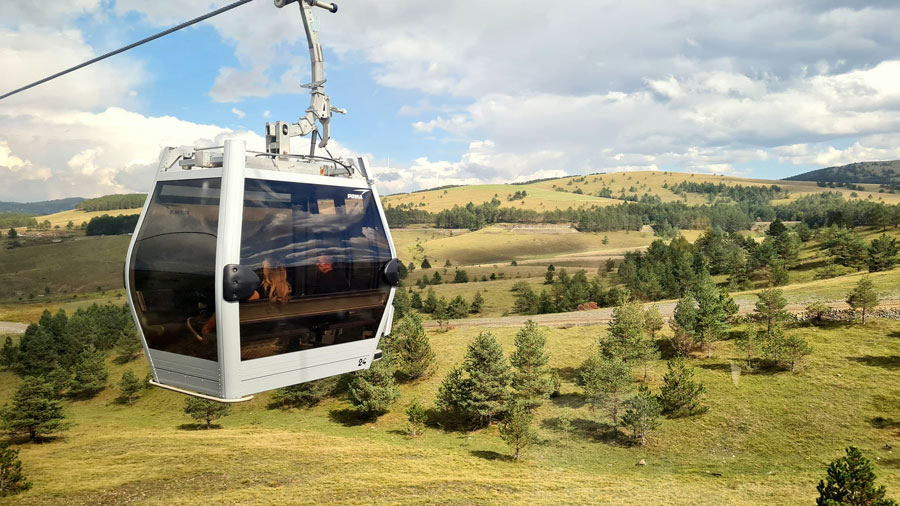 This is Gold Gondola, the longest panoramic gondola of its kind in the world. It takes off at the Zlatibor center and then glides above the velvet-like hills and Ribničko Lake, only to reach the highest peak. Gold Gondola team and people from Vizitor Café prepared a tea party and closed the place down, especially for us. Not only that we had tea and tried some homemade sweets but we were also welcomed with komplet-lepinjas and shots of rakija. 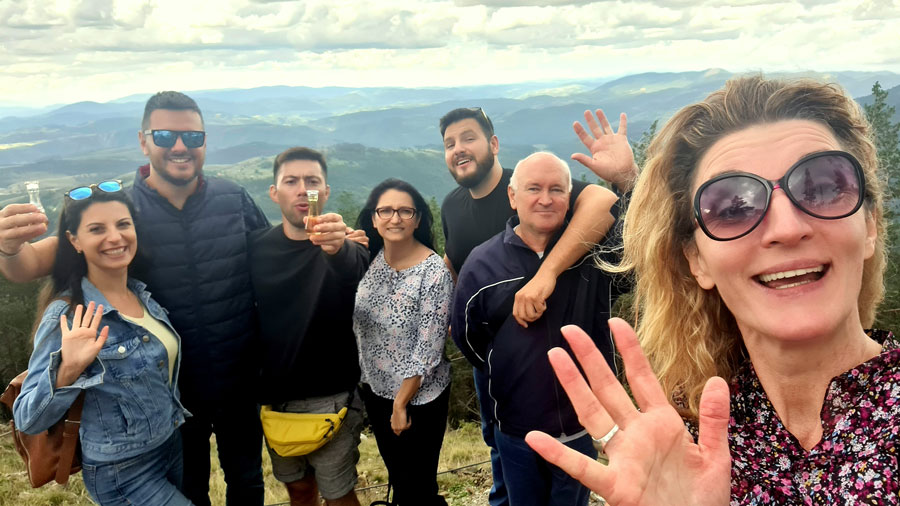 And a selfie :: On top of Tornik

(There was a dark cloud threatening to cover us all but it was considerate enough to wait until we finish what we came to do and retreat to cabins. A short shower poured down later while we had a break at Ribničko Lake, but that was it.) 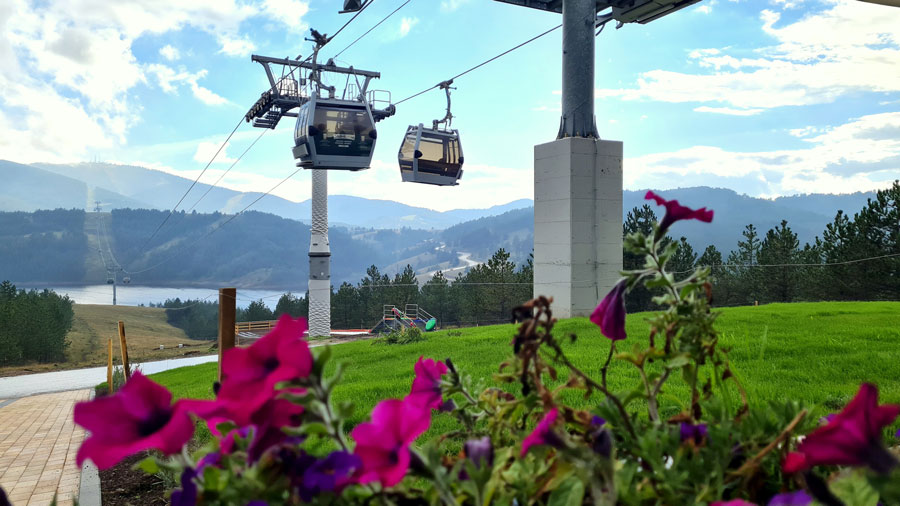 A station at Ribničko Lake

Our first encounter with Prijepolje was at Mileševa Monastery given that we spent a night at its dormitory. This was a special experience since most of us haven’t slept at the monastery before. They say that judging by the quality of your sleep here you can discover how sinful you are. There wasn’t any phone signal or Internet that night. (Maybe that was the reason we woke up well rested.) 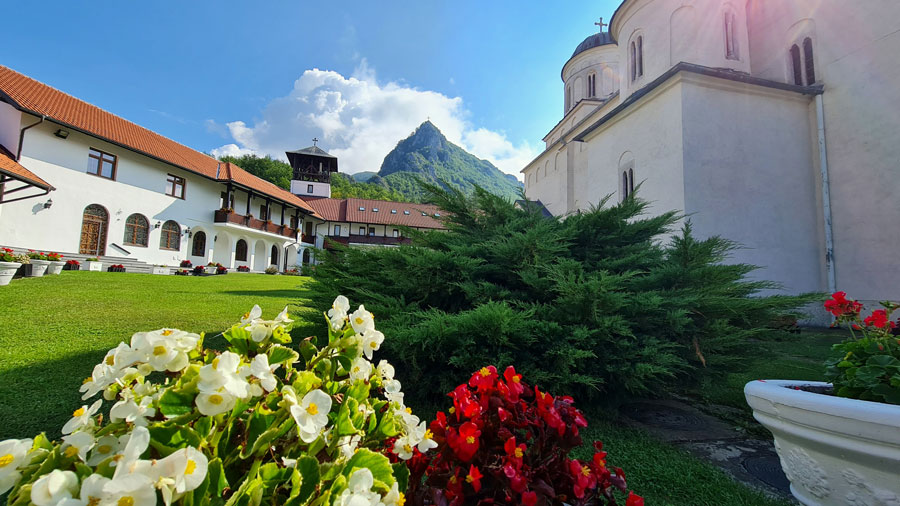 A view from the monastery courtyard

Thick fog was moving up towards the old fortress Mileševac in the morning, leaving the monastery under the perfect blue sky, just right for taking pictures and filming. (Learn more in the Things to do in Prijepolje post.) Our little group was allowed to record the inside of the church as well. Dragica and I took a walk, talking to some other visitors who came from Derventa. 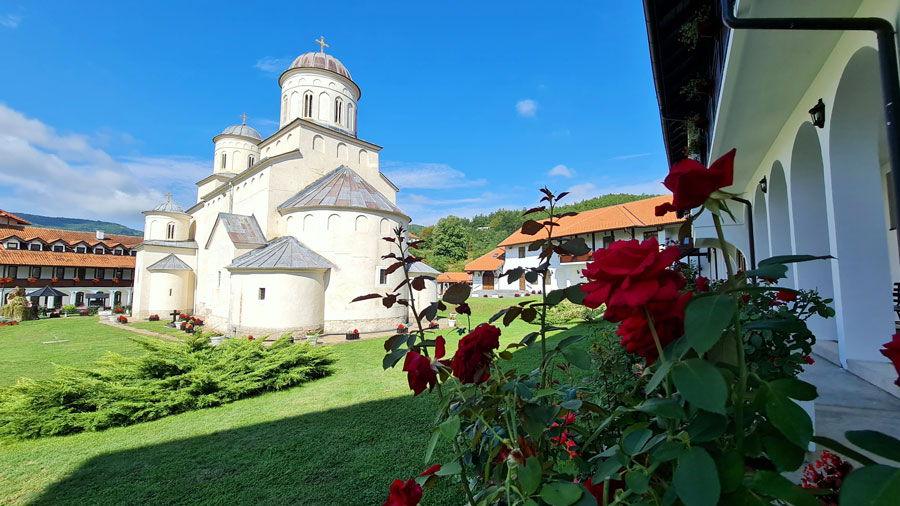 The church at the center of the monastery complex

We also went to Kamena Gora thrilled to see the Holy Pine that’s a few hundred years old. The sky looked like it was shrinking and darkening but we were aware of the luck we already had for almost three days of climbing west Serbia hills under the blue skies. (Despite forecast.) But still, those clouds pulled back again. On our way to Sopotnica, the blue sky was peeking through. 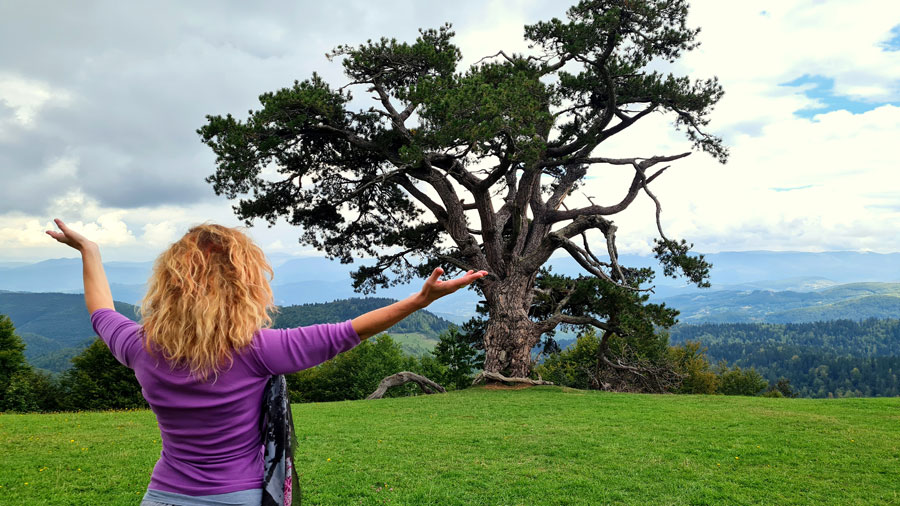 The 20m-waterfall that cascades over stones covered with moss at an altitude of about 1,000 m in Sopotnica, was another beautiful site. Clean air and roaring water were such an inspiration to climb the steep path to the top. Marija and Aleksandar waved from above right next to the stream of water that tumbled down the Prijepolje rocks. 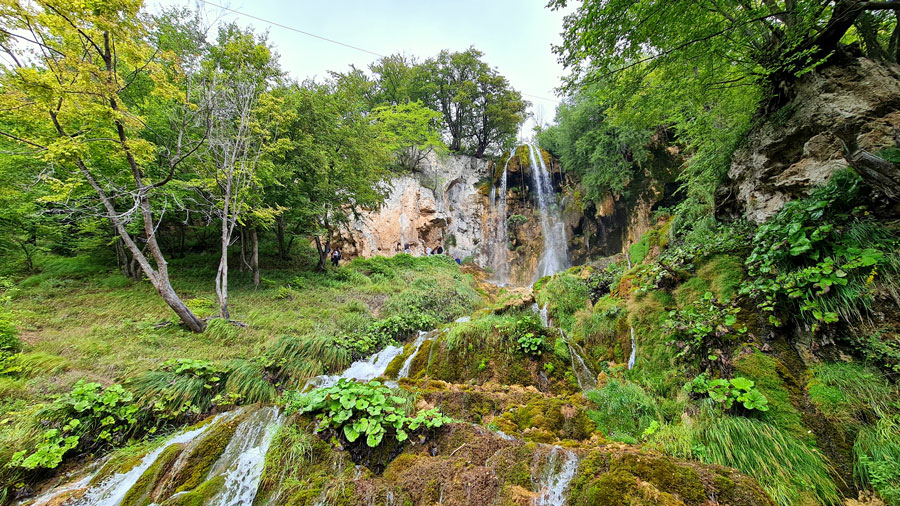 When we finally had lunch at Voja’s place a few curves down the road and sat inside, such a shower crashed down that it seemed like the sky will fall! “It doesn’t really matter now”, we joked given that our little tour was over. This was our last stop. (There will be another trip in spring, to Tara, Sjenica, and Zlatar.) 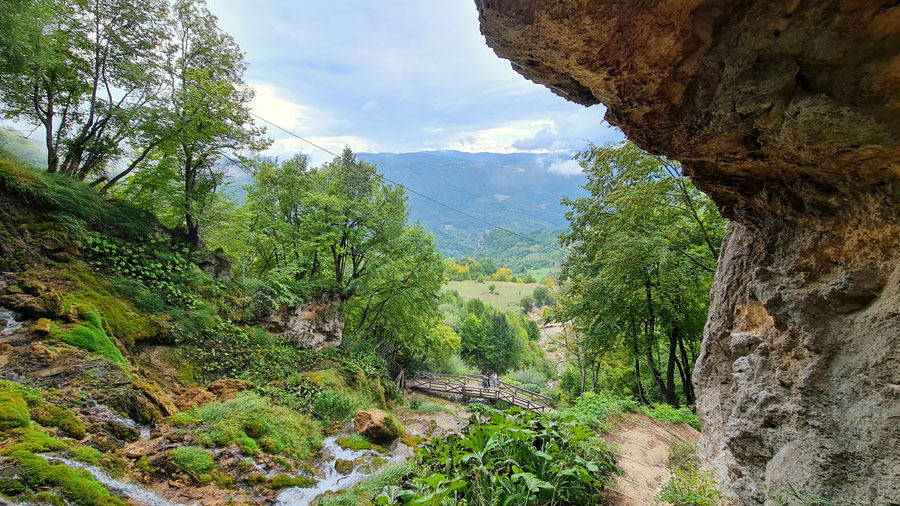 A view from the top of the waterfall

They say that good people and positive energy bring along nice weather. It seems that this time – we proved the point!

Other DESTINATIONS from around the globe

Pin it for later: 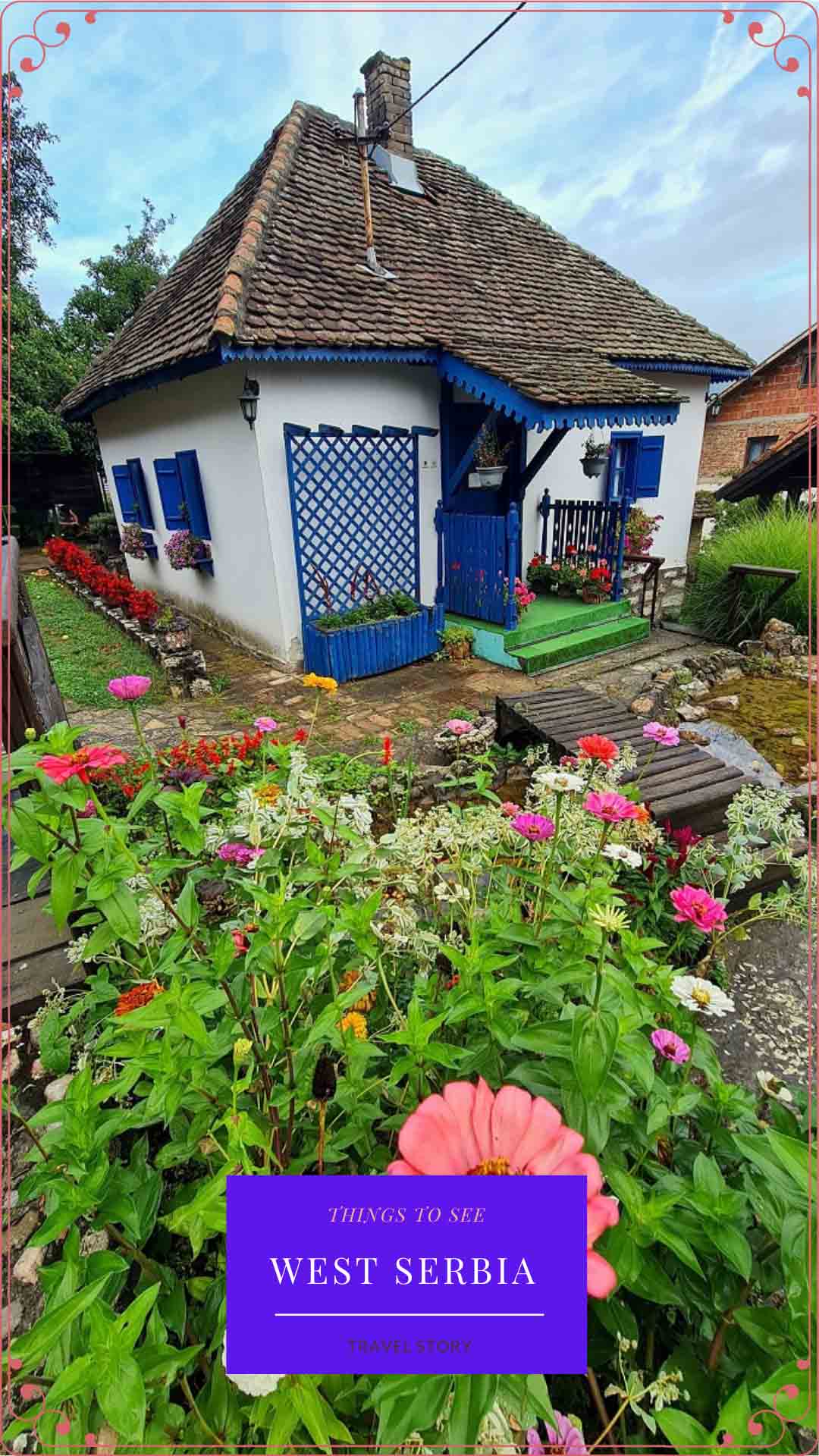 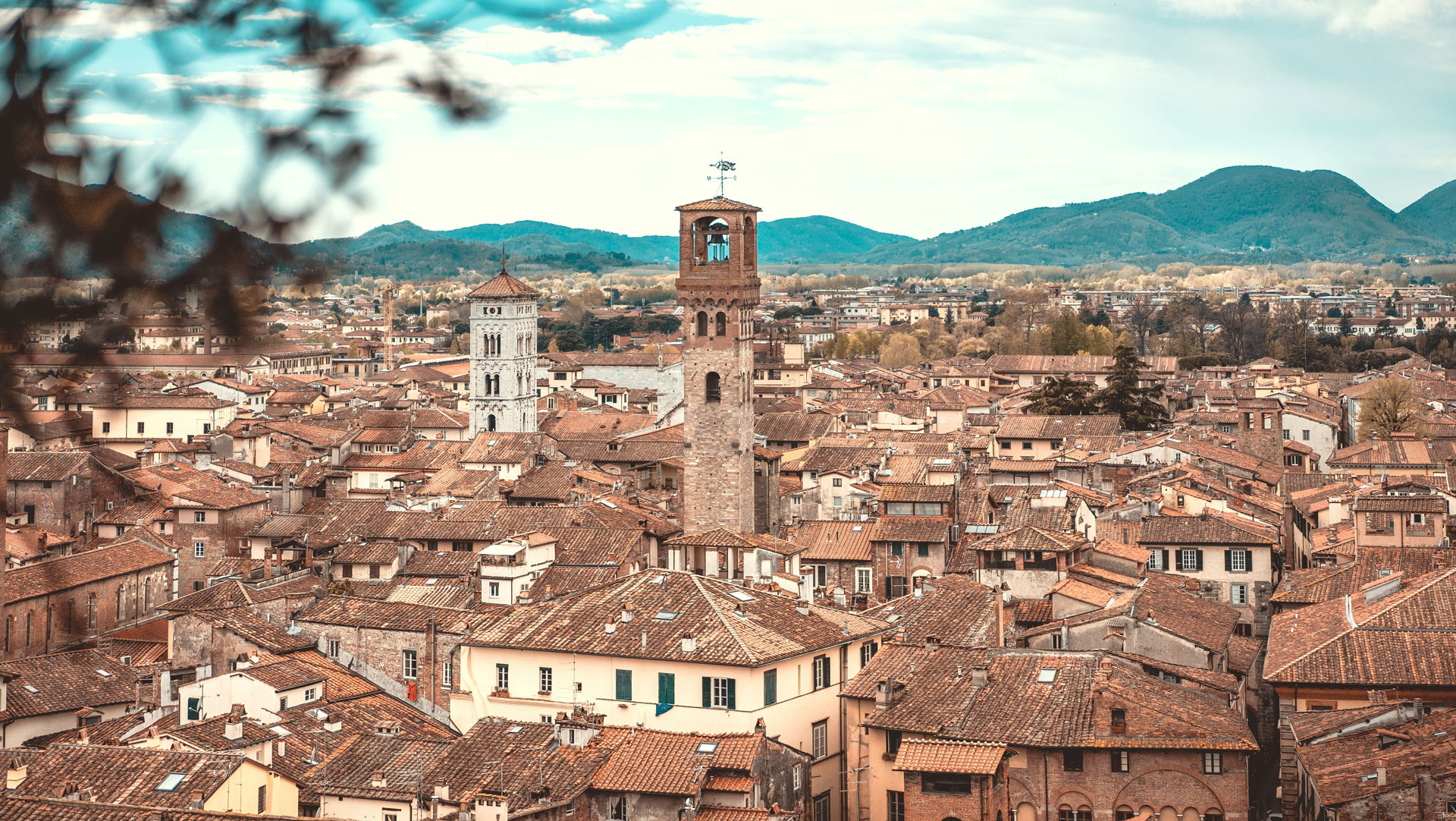