When it comes to places to visit in Parga Greece, I was more than pleasantly surprised. This town on the coast of the Ionian Sea is extremely charming with pretty beaches, a couple of interesting castles, but what I enjoyed the most were its Venetian architecture and the narrow allies. Here is what to see in Parga.

Parga is situated in Epirus region in the western part of the country between Perveza and Igoumetnitsa town. Even though it’s a small coastal town, Greeks like to say that it has an island feel.

Through history, Parga was ruled by the Venetians, Byzantines, French, British. Unlike the rest of the country that was controlled by the Ottomans for centuries, this part of Greece, including Parga, was under the influence of the Republic of Venice until its fall at the end of the 18th century. Hence the recognizable style and the Venetian castle above the city. 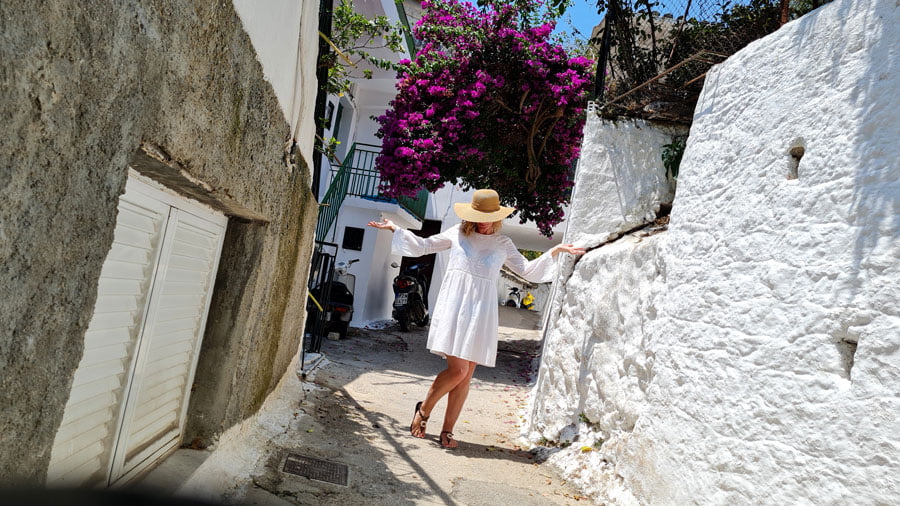 Things to do in Parga Greece

There are a few places to visit in Parga Greece that you just can’t afford to miss. These visits should be among things to do in Parga – a visit to the central 13th century Venetian Castle and the Ali Pasha Castle above the town. 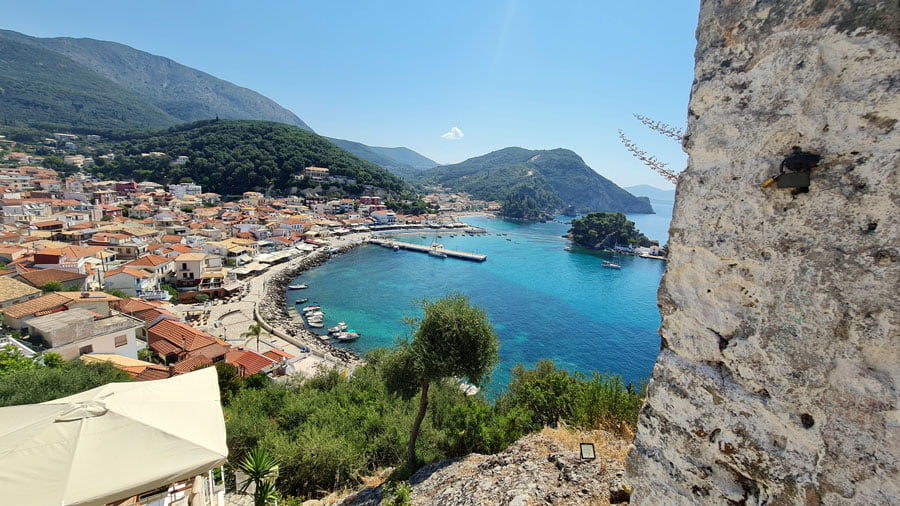 Town panorama from the fortress

The Venetian Castle is overlooking the town built for the purpose of protecting the bay. Parga residents initially erected it in the 11th century to protect themselves from the Ottomans and pirates. 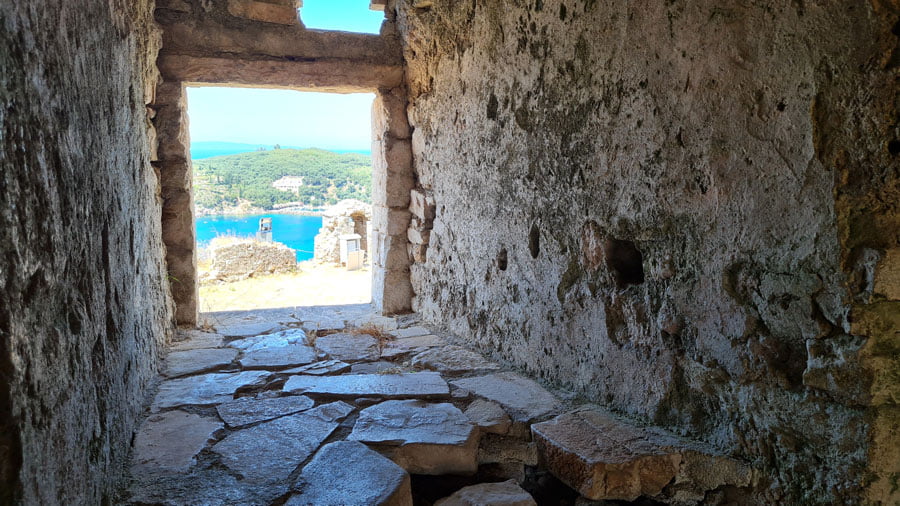 One of the old windows

In the upcoming centuries, the castle was demolished a couple of times only to be rebuilt and fortified again and again by the Venetians – in the 13th, 15th, and 16th century. The castle was impregnable until the beginning of the 19th century, even when it was heavily attacked by Ali Pasha of Ioannina. 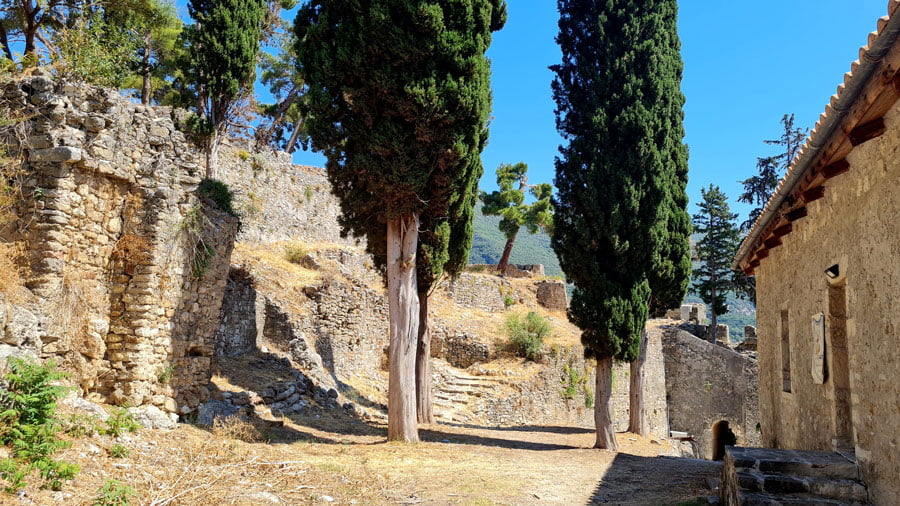 Strolling around castle ruins and cypresses

The castle is not just among the best places to visit in Parga Greece because of its history but also because it provides a breathtaking view of the bay. Take a stroll around the ruins, as I did, enjoy the view of Parga on one side and Valtos beach on the other, but make sure to rest at the hilltop restaurant with a Greek frappe and waffles. 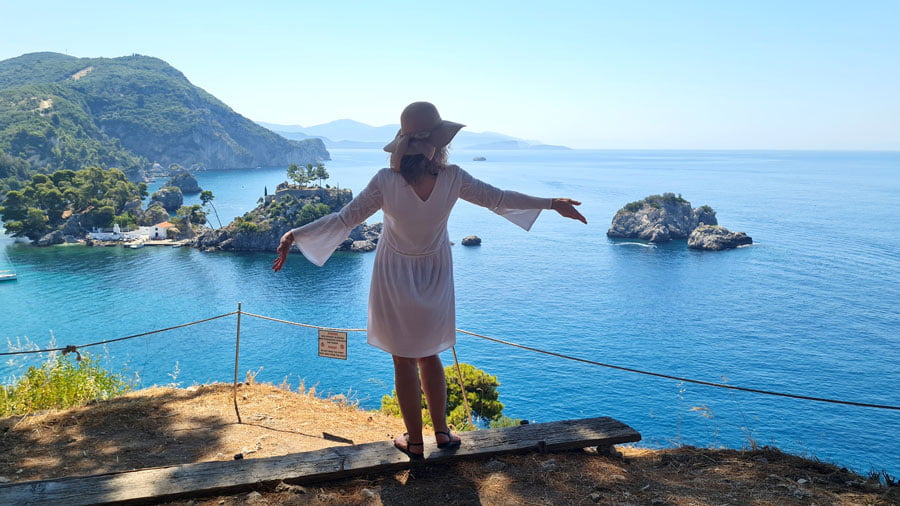 A view of the Ionian Sea

The Castle of Anthoussa or the Ali Pasha Castle is located near Anthoussa village on the top of the hill above Parga. It was built by the Turkish governor of Ioannina in 1814 overlooking the bay. Two guns bought from the Russians are still to be seen at the location. 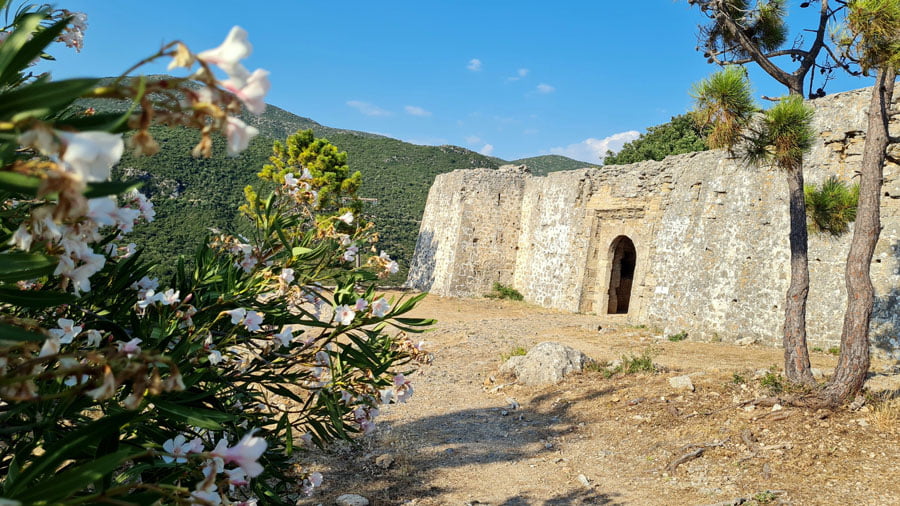 Parga was the only part of Epirus not controlled by Ali Pasha after the fall of the Republic of Venice. He couldn’t do anything at the time since the town was protected by the French. When Napoleon fell in 1814, Ali Pasha was on the move. 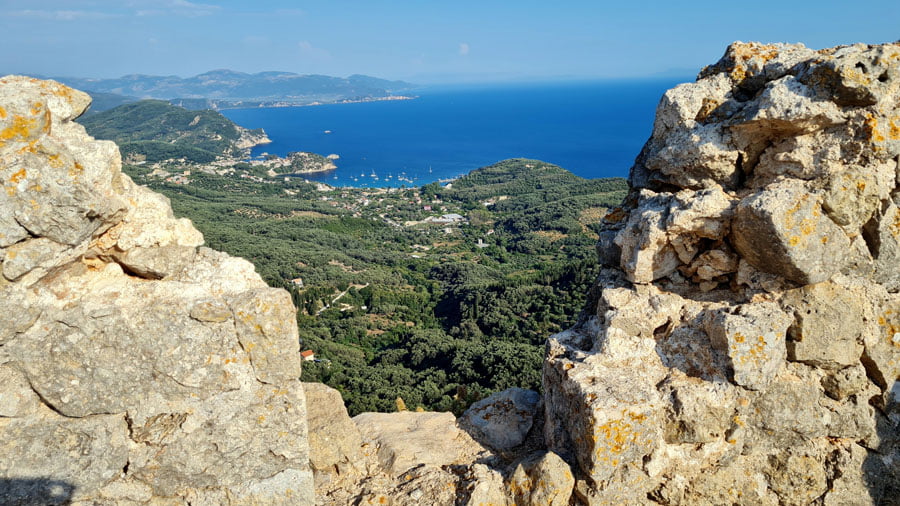 A good view of the whole bay

He built a fortress on the top of the hill so that he could conquer Parga more easily. Nevertheless, the British took over the power over the Ionian islands and Parga from the French in 1814, only to sell the town to Ali Pasha five years later. 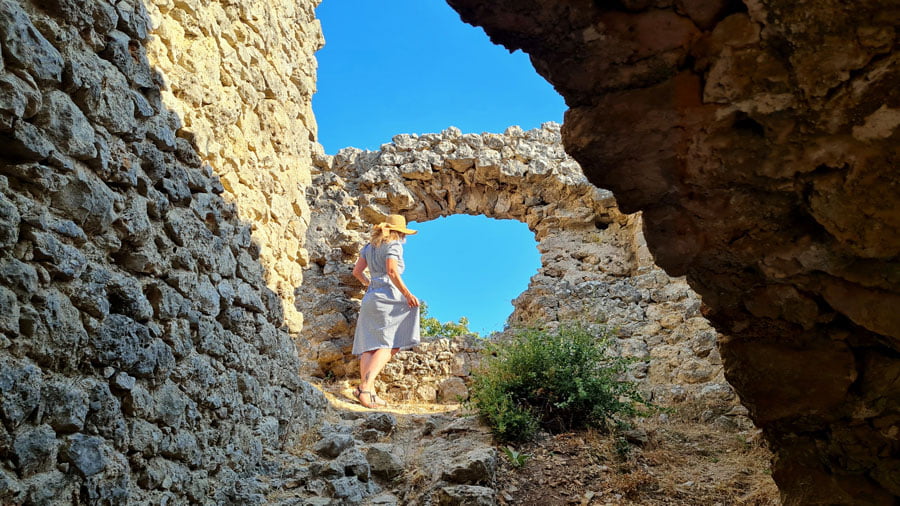 Places to visit in Parga Greece – The Anthoussa castle

The first thing I realized when taking a stroll around Parga Greece is that I could discover a new ally every day. Venetian houses in vibrant colors adorn the waterfront landscape. That is what Parga is famous for and you probably saw numerous pictures of the site. 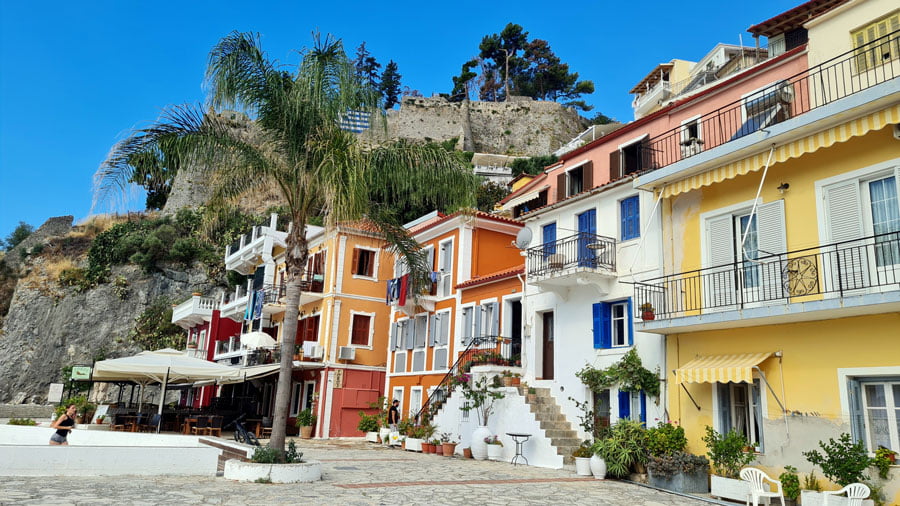 Narrow allies are often too small even for a bike or they just have too many stairs, since Parga is built on the slopes of the mountain. That is why houses look like they are hanging from the hill, and that they could tumble down at any moment. 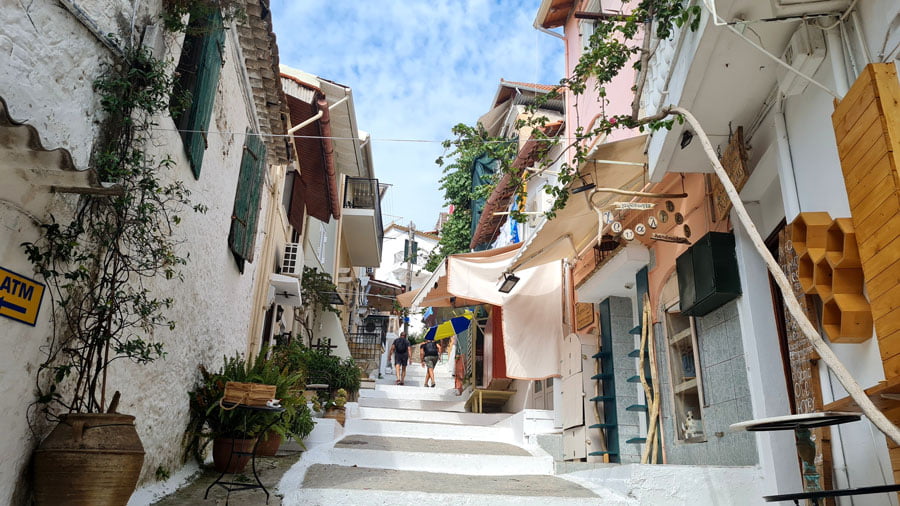 When it comes to holidays in Parga Greece, tourists enjoy narrow allies with small shops, bars, and restaurants. Every now and then you will come across a tiny square with a few tables or a church. If you take the steep stairs up, you will be able to visit the Venetian Castle. If you continue taking the steps down on the other side of the hill, it will be easy to reach the Valtos beach. 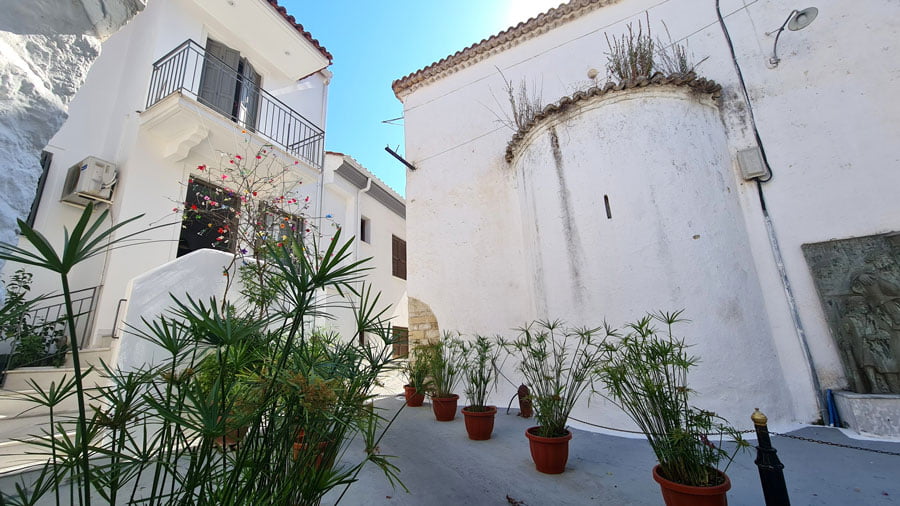 A small chapel among the allies

Another thing to see in Parga is the Panagia Church that is only a swim away from the town’s beach. It is situated on the small island across the seafront of Parga. I was surprised that it could be easily crossed on foot. People were bringing things above their heads (phones and cameras), taking walks around the island. This is where Greek weddings often take place on weekends. 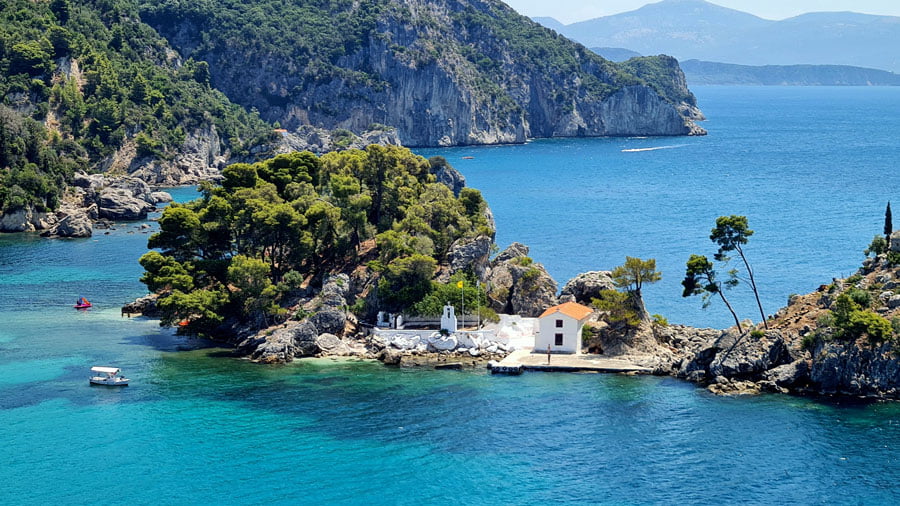 The Panagia island as viewed from the castle

Local beaches are definitely among places to visit in Parga Greece given that Parga is a summer resort after all. The most popular and easy to reach Parga Greece beaches are Valtos, Krioneri, Piso Krioneri, and Lihnos. Tourists like to explore Sarakiniko and Ai Giannaki beach as well. 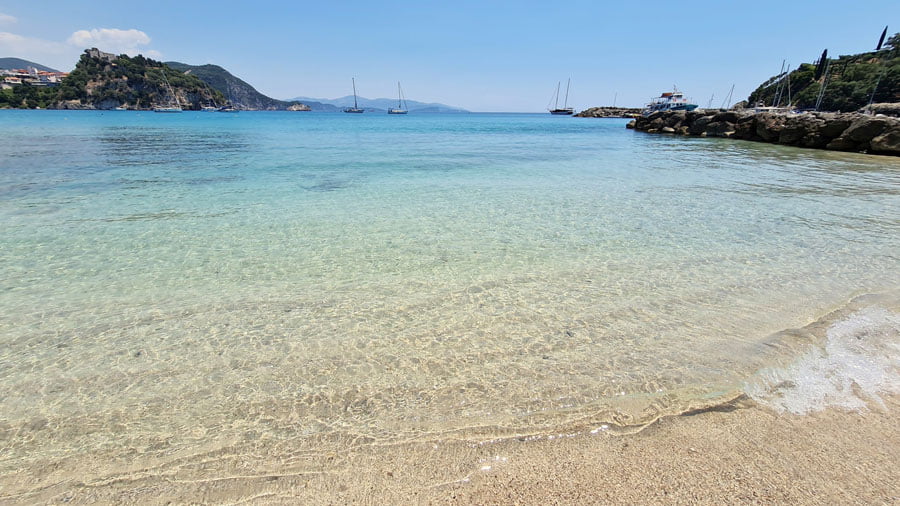 Valtos beach Parga is one of the longest here. It lies on the other side of the hill that is occupied by the colorful houses and the castle. Given its proximity (it takes about a 10-minute-walk to climb up and down the stairs from Parga), Valtos beach is very popular not only among swimmers but surfers as well. 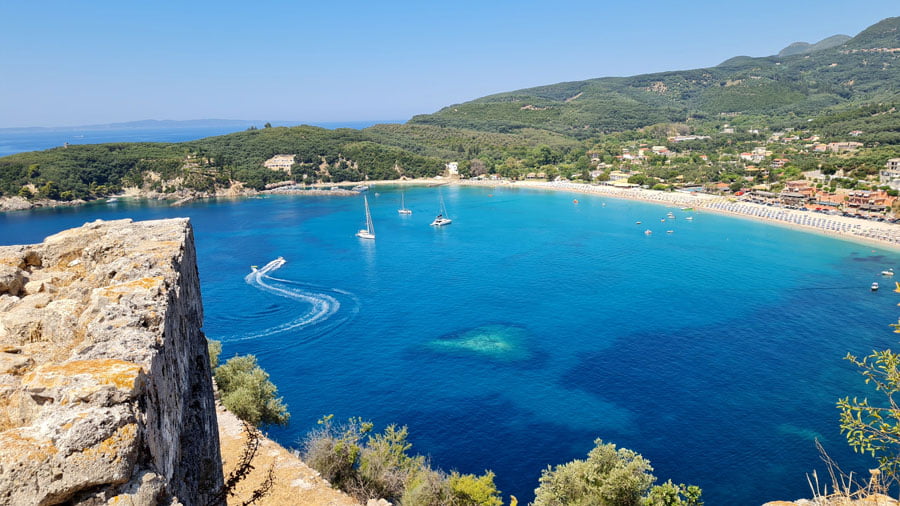 As viewed from the castle

Numerous restaurants are lined up along the beach with sunbeds scattered around its sand. Valtos beach Parga is also popular among sailors who park their vessels to take a swim or a lunch on the shore. 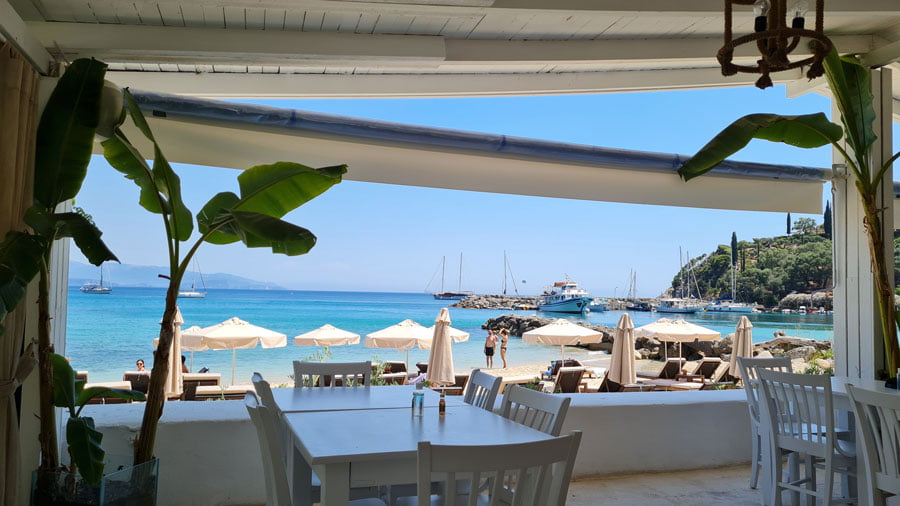 At the terrace of one of the local restaurants

Krioneri beach (meaning ‘the cold one’ in Greek) is the town’s beach. It follows Parga’s seafront. You can have something to drink on the waterfront and then immerse yourself into the chilling Ionian Sea. 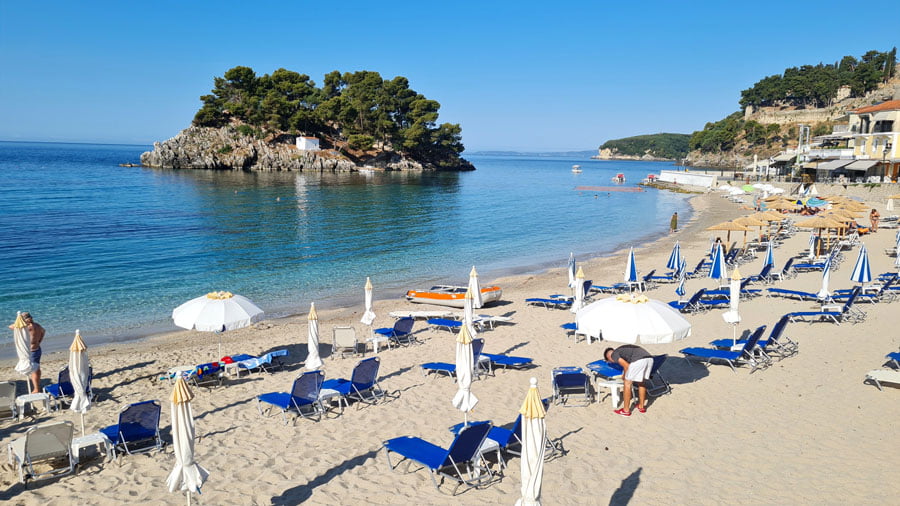 Given that it’s the closest, Krioneri beach can often be crowded. It overlooks a lovely island with the Panagia Church. 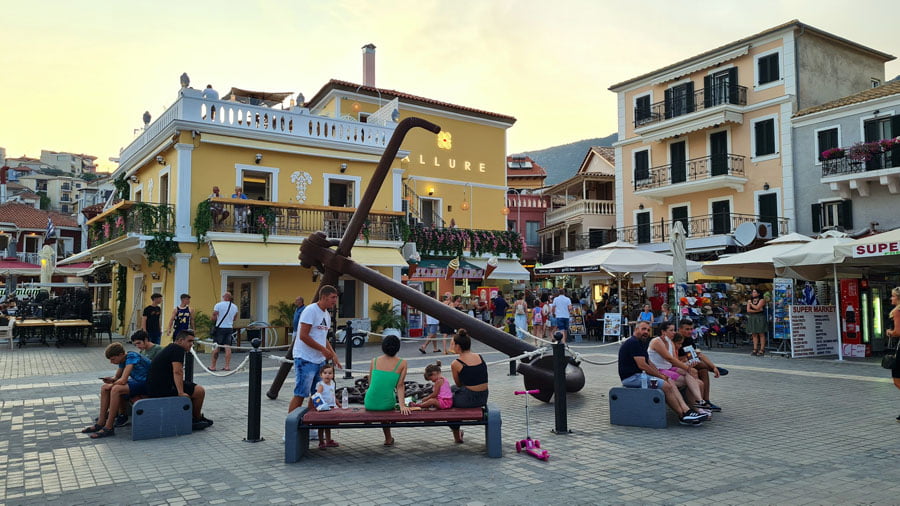 …And the busy town center in the evening 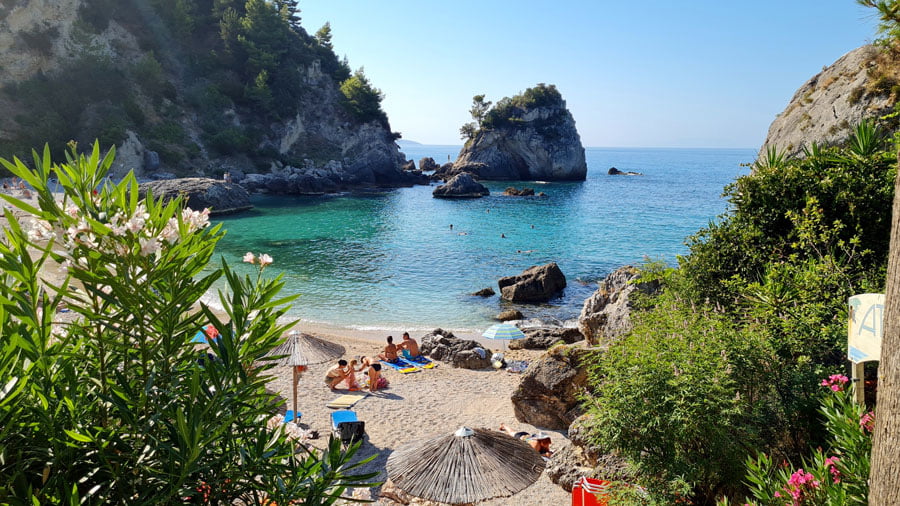 Piso Krioneri, tucked in between rocks

Even the passage towards the beach is somewhat secluded – looks more like a way to the parking lot. But when you go out to the beach, you will be blown away by its charm. 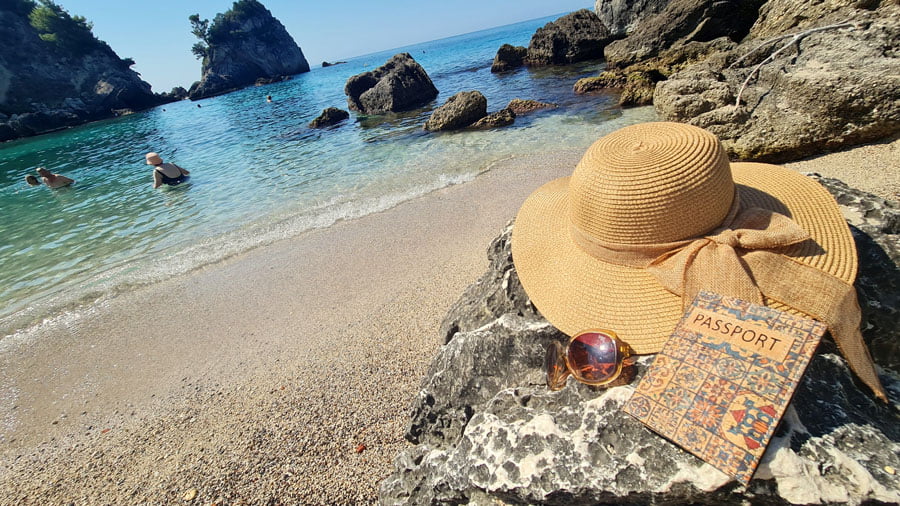 Piso Krioneri beach is small and it doesn’t have room for many sunbeds. What I loved about it is that I could come in the morning, take a sunbed and have a morning swim, and go up to the lovely terrace to have a coffee and toast. While overlooking the beach and a few scattered rocks in the sea, I could do some work here. 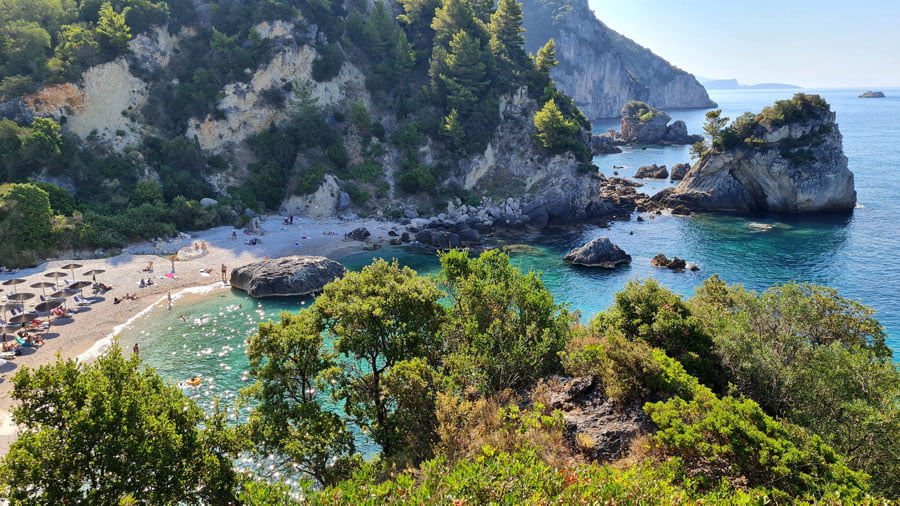 A view from the terrace

The beach is not that crowded and I was able to enjoy the sound of small waves splashing its pebbles. If I wanted to eat, there was another restaurant right there on the beach. I had the Greek souvlaki here. 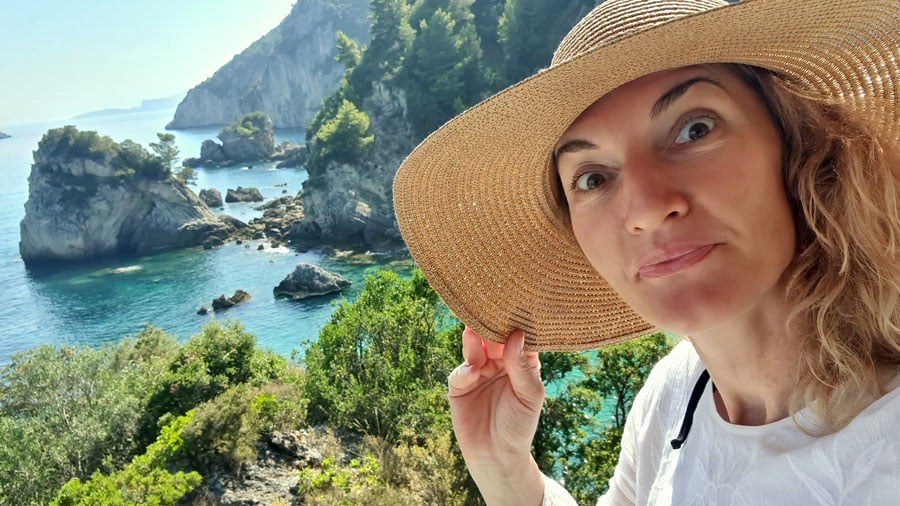 Places to visit in Parga Greece – Enjoy the views

What to do in Parga Greece

Besides all the sightseeing and occasional cruises, one cannot skip tasting Greek food. Numerous restaurants will offer a variety of world cuisines, but I will always recommend trying some of the Greek specialties. You can always have pizza at home, right. 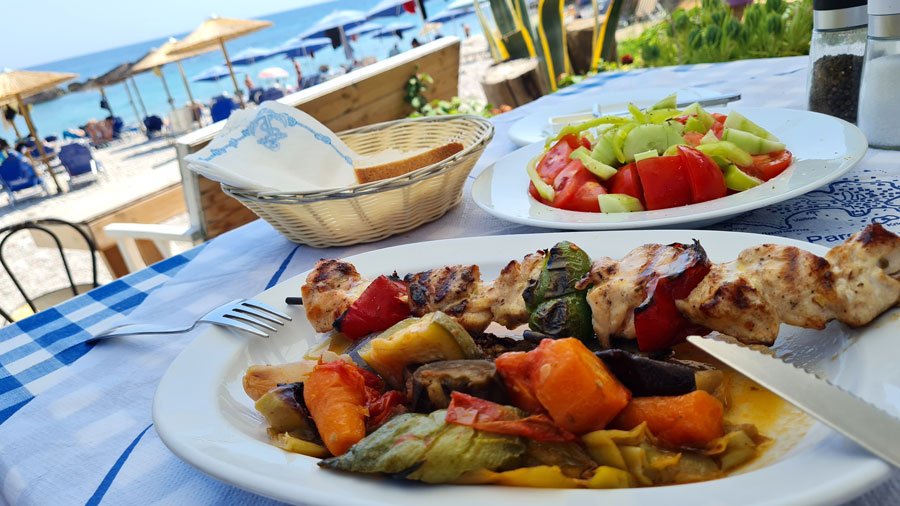 The famous souvlaki at the beach restaurant

So, besides the souvlaki that I mentioned earlier, you should try Greek salad, gyros, the famous Greek moussaka, or its alternative here – the so-called papoutsaki. I couldn’t resist having some seafood either. 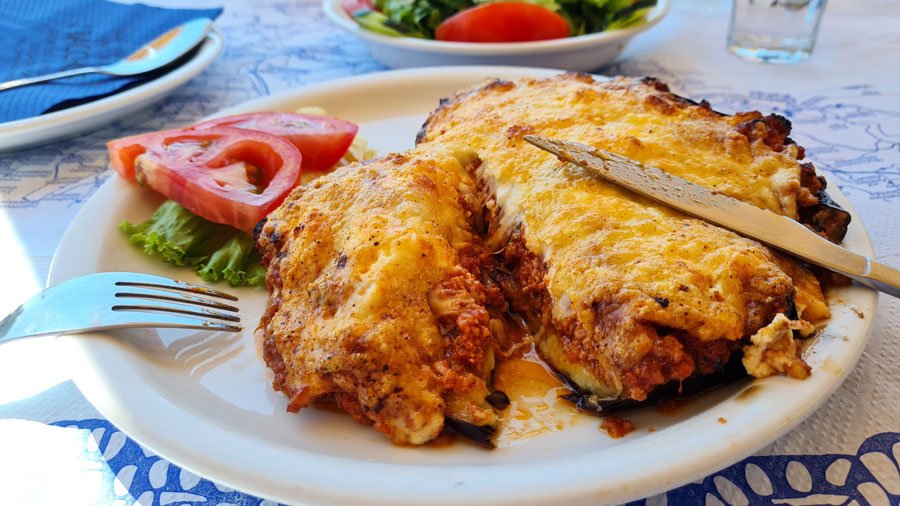 How to get to Parga

Tourists often arrive via the Ioannina and Corfu airports, but also by boat from the nearby Ionian islands (Corfu, Lefkada, etc.). 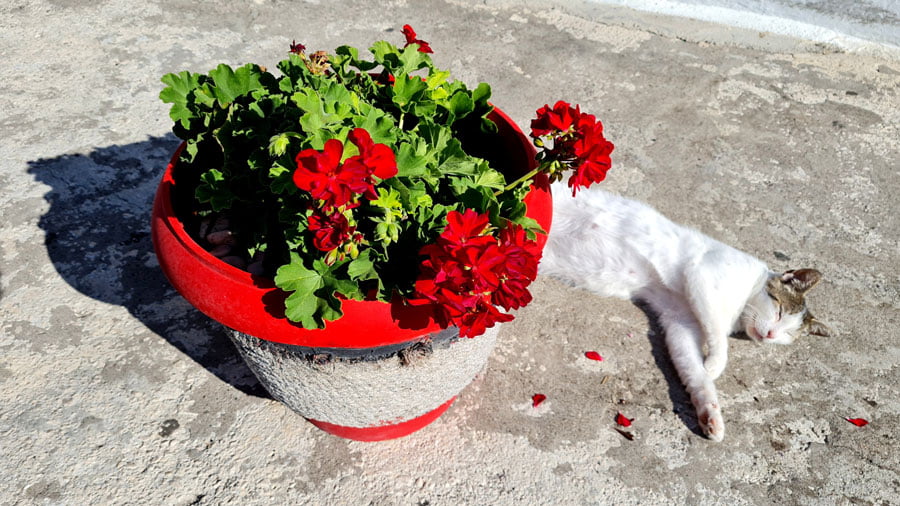 A detail from the sunny Parga streets

It’s also easy to take a Parga cruise from Paxos to Antipaxos or to go hopping among the best Ionian islands to visit. Bear in mind that it will only take a 3-hour-drive to reach the Meteora Greece Monastery and to visit the famous Acheron River on the way.

Next: TRAVELING TO SLOVENIA 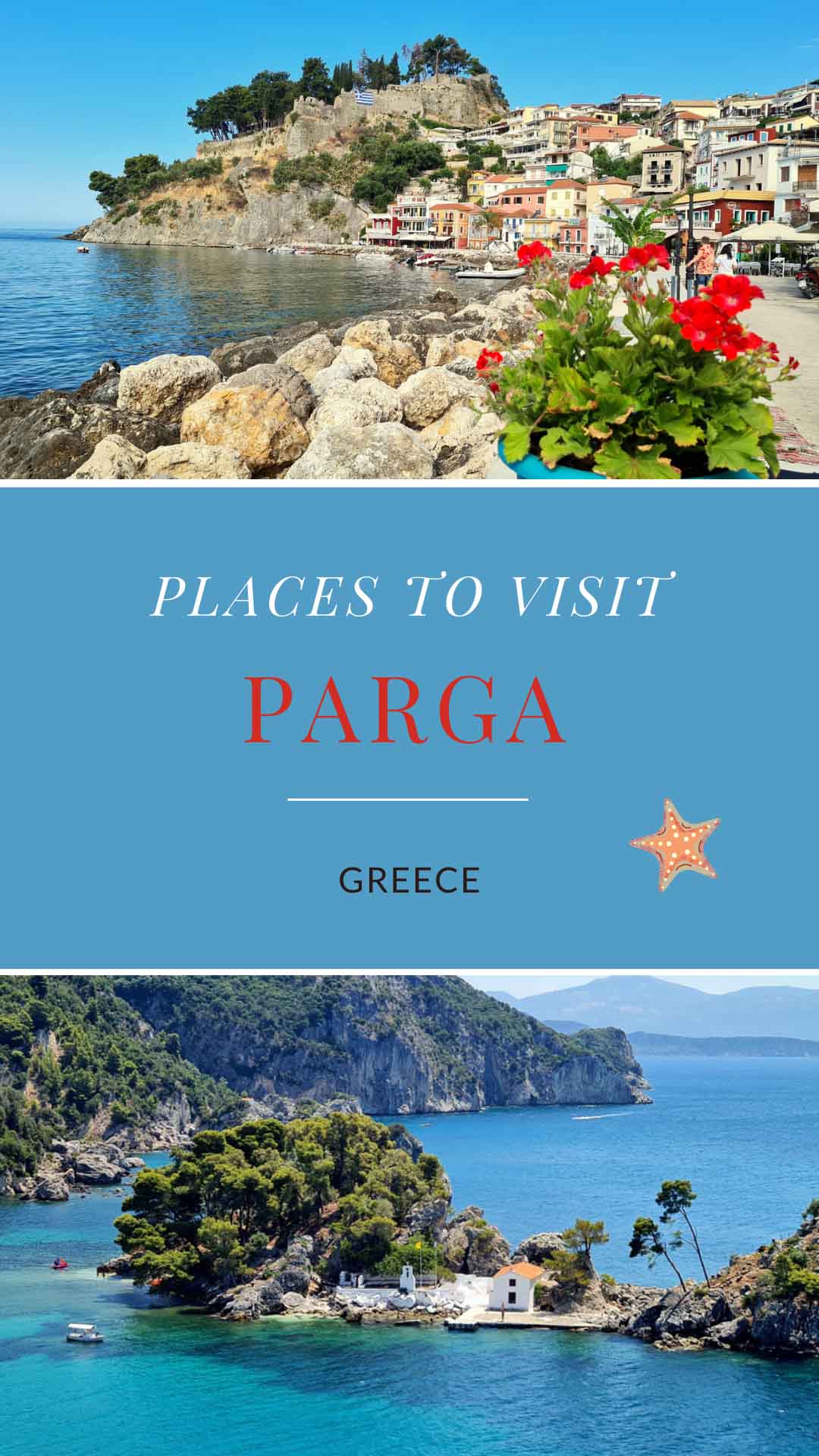 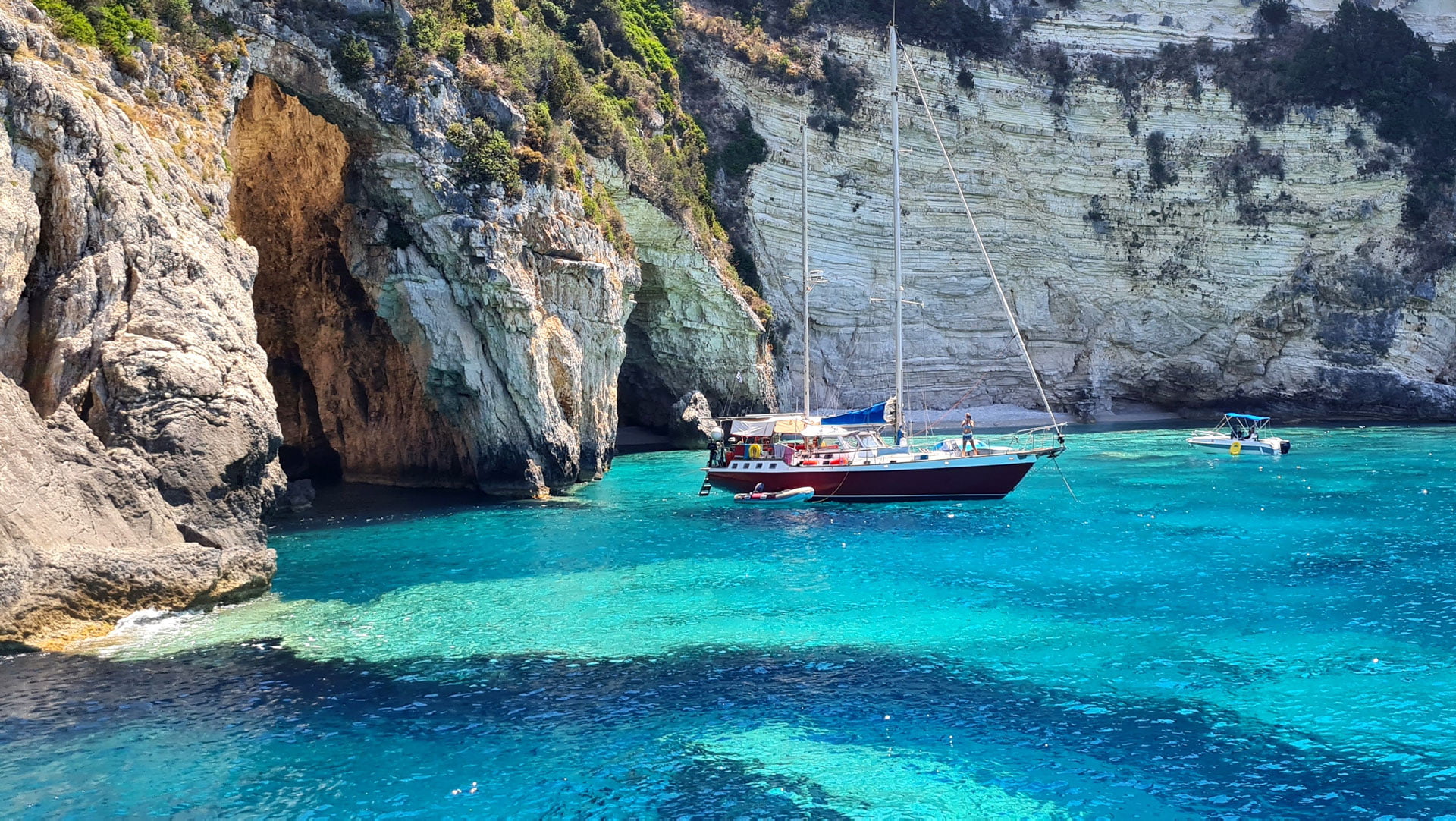 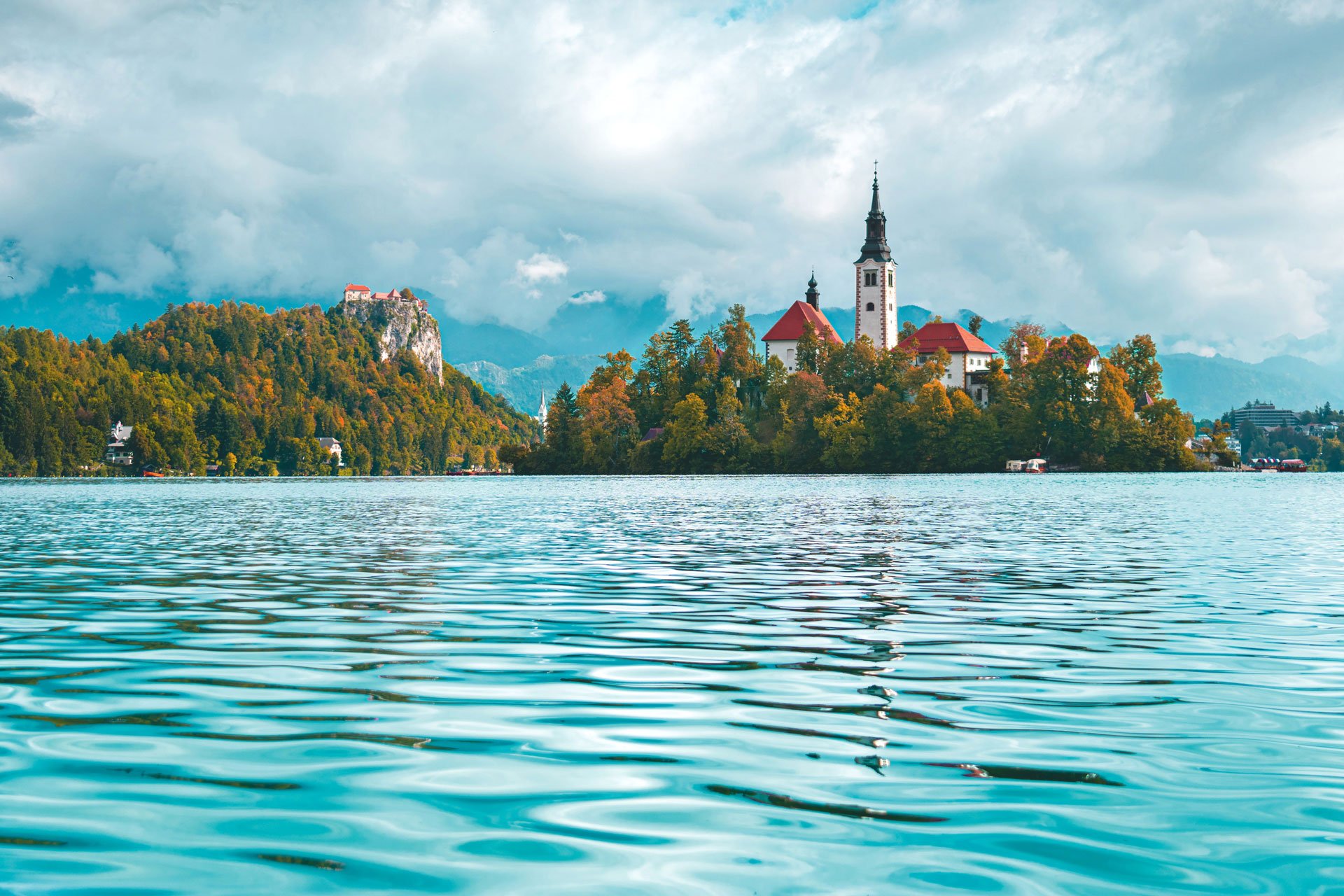